There are many memorials in September 11 to those whom were lost in the September 11 terrorist attacks. But the one made by Geena Zackerly-Magic (geena.zackerly) stands out for it's size and design. Once at Stagg Island for several years, which got it the name "Stagg Island Memorial," it was recently moved to the Yellow River sim. On every anniversary of the attacks, there are at least two ceremonies at the memorial. This Tuesday September 11, I attended one. 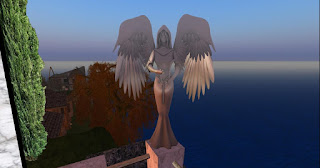 Before the ceremony began, Geena advised us to turn our environmental setting to midnight. She would explain that each wall at the memorial contains every name of a precious life lost that day. The individuals on the Airlines, in the World Trade Center and in the Pentagon were all on the walls. Geena would explain that there is an eternal flame signifying the light of these souls and keeping their memory forever alive. Above the eternal flame rotates the Earth. “This signifies that all countries were impacted by this terrible tragedy. We lost people from all nationalities, colors and creeds that day.” said Geena . “Evil does not discriminate. Angels at each other guard all the individuals honored here.”

“The two recessed waterfalls represent the footprint of each building.” Geena  pointed out. “The beam of light in each footprint signifies each tower and are intended to light up the heavens for our loved ones as a guiding beacon to eternity.”

Geena went on, "The two recessed waterfalls represent the footprint of each building, The beam of light in each footprint signifies each tower and are intended to light up the heavens for our loved ones as a guiding beacon to eternity.

"Andy Bernheim (andy300uk) is honored and proud to wear the uniform as well to be standing here at the ceremony. 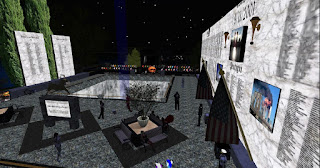 “At one point in our ceremony the 'Lanterns of Souls' will rise out of the water (from each footprint) to the heavens, signifying the rising to heaven of the souls of every human being being lost that day.” Geena continued. “Commemorating the strength of the Two Towers and the never ending struggle against all that ie evil, to stand tall.”

“Representing the innocent passengers flown into targets strategically selected by the scum who took the planes over. You will hear the towers being attacked in the background.” said Geena.

While Geena  was giving the presentation, music was being heard. “A live television broadcast that we all watched that day, a very comprehensive description of the events of the day.” Geena  explained about the news coverage that came up.


Dayanara McDonnagh explained that he was only four to five blocks from the Pentagon when it was attacked. It is sad. “All is lost.” he said.

Geena went on to explain, “As the day progressed, every human being felt the need to arm themselves, protect their families, friends, their property and their neighbors. Not really knowing why this happening, who was behind it, why so many innocent people had to die in such a horrible way, for what reason?? How could this act be justified?? By anyone?? With no valid answers to any of those questions all there was to feel was 'vengence.' Someone will pay for this!”

“The world realizes that this tragedy not only effects the families of those taken, but strikes at each person, it has touched us all!! We are all saddened! We have all been violated! Victims family' reach out for their loved ones... praying they made it through everything. Hoping against all hope that they survived.” 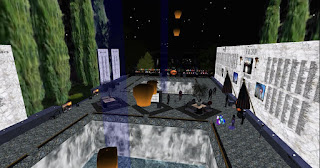 Geena pointed the lanterns rising from the footprint of the towers signify the rising of souls to Heaven. “Our hearts have been hardened and desensitized to every day life.” Geena explained. “Reality is more than we can bare. Every day life will never be the same as we knew it. The shock, the pain that all of us have to deal with as to what has happened to our nation, our brothers and sisters, fathers and mothers, children and neighbors... our very existence! Only time will reveal what is going to happen. Will this happen to us again? Have we learned to protect ourselves against evil in the world? Will we become complacent... let our guard down? Who can say? Only time!! It is our duty and our responsibility to those we lost to do everything in our power to prevent this from ever happening again. Let us hope for a strong nation and better times as we honor our loved ones in their peaceful rest.”

“A senseless act like this reminds us all that our lives are just a drop of water in a large ocean. At any given time we or our loved ones can be gone. So hold those you love close, EVERYDAY, for tomorrow may never come.” Geena said, “The time has come to accept what has happened... it isn't a nightmare... It's real! We are mad, we want vengeance, someone has to be held responsible for these horrible acts. On the other hand however, our innocents.. our family members, our loved ones are free now. Free from the human suffering brought on to them from these evil people. It's time to let go of their physical beings and embrace their spirits.”

As the ceremony drew to an end, Geena  said, “Thank you for remembering with us. We must NEVER FORGET!”

Six String (roleplayismylife) said that he wrote a song because of this event. He recited his song,

When I woke up that morning, the leaves were changing hues
When a friend called me, and said "Turn on the news!"
The horrors I saw, I couldn't believe my eyes
At first I was so shocked, I couldn't even cry.

It was a fateful day in September
When the Trade Center fell
Fire, and death were all around,
And the world was going to hell

I didn't know, just what I should feel
But then I saw the replay, and I knew that it was real
I didn't know, if I was going to live, or die
I had mixed emotions, and I felt empty in side

On that fateful day in September
When the Trade Center fell
When fire, and death were all around
And the world was going to hell

I asked myself "Is the world coming to an end
Then I hear a voice from above say "don't give up hope, my friend!"
So that's my advice to you, when you've lost your Ameerican pride
Remember 9/11, and all the people who died.

On that fateful day in September
When the Trade Center fell
When fire, and death were all around
And the world was going to hell.

The ceremony was held at http://maps.secondlife.com/secondlife/Yellow%20River/64/155/41. The memorial is still there.

Deaflegacy
Posted by Bixyl Shuftan at 6:00 AM