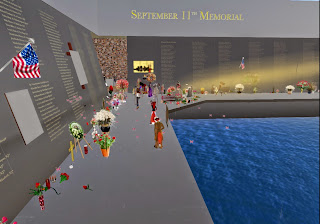 It was eight years ago that the deadliest terrorist attack on the United States struck, damaging the Pentagon, destroying the New York World Trade Center, and killing about 3000 people. In real life, ceremonies were held across the country. Thousands came together near “Ground Zero.” Other ceremonies were held at the Pentagon, the crash site of Flight 93 near Shanksville Pennsylvania, and other places where people gathered to honor those whom were killed.

In Second Life, a number of memorials have also been built. large and small. Probably the largest (in sim area coverage) and most attended was the September 11th Memorial in the dAlliez Land Headquarters sim. It was a pool of water with a walkway around it, surrounded by four marble walls, etched with the names of the fallen. One corner was open, showing a number of pictures of those who died that day. Rain was falling, adding to the atmosphere of sorrow.

Numerous avatars of all shapes stopped by to pay their respects, leaving behind flowers, wreaths, flags, pictures of Christ, and other momentos. Among one pride of feral cats sitting near one group of wreaths and flowers, “ ... my Grandpa was trying to save some people up in some of the floors, and sadly while it was collapsing, he didn't make it. But he was brave and he saved the people. Well some. (sad) “ (shocked expression) At least he died saving people. (sad)” A vixen looked at the pictures, “... look at them, white, black, Christian, Jewish, Muslim ... “ One man commented, “I was a solider, and spent the next four years of my life shortly after chasing and killing these S.O.B.s. I hope these families are at peace today, for me going over there would be lost.” People nearby thanked him, but he humbly responded, “No, I’m just a small part. ... God bless these families.”

Alliez Mysterio, a real estate businesswoman in Second Life, is the owner of the land the memorial is on, “People started coming in last night and it has not stopped, she told me. “I donated the land, 1/4 sim. It was an honor to do so. And today, increased the prims here to double.... The people coming here today were just wonderful.”

Alliez couldn’t give a total of how many showed up as the sim had been hit by griefers, “records were wiped out. It took over an hour to get the sim up. But Linden Lab was great with the help they gave me. ... Liam Kanno created this Memorial. ... this is the 2nd year it has been in existence. I met a guy here today who found his Dad’s name on the wall. I helped a girl find a friend on the wall. I hope more families will hear of this Memorial and consider adding their loved ones photos to be shared.”

Liam Kanno in real life is Odin Liam Wright, with his own article on the memorial: click HERE. 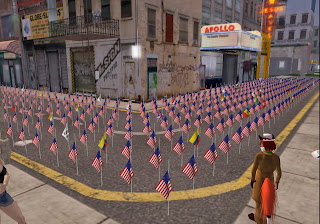 Regant Estates’ New York NYC sim had another memorial. Two transparent images of the World Trade Center Towers stood high in the air, ghostlike. On the streets nearby were a seemingly countless number of flags, going around the streetcorners. Most were American, but there was an occasional flag from Britain, Germany, Japan, South Korea, Venezuela, and other countries, a reminder the tragedy was international.

The NYC sim, New York City Block, is owned and built by a resident of the real life New York: Cheri Bing. Originally part of another sim, it later moved to it’s own. The Twin Towers have always been a lasting part of the sim since constructed, with American flags and a picture of a red white and blue ribbon: “9-11-2001 Never Forgotten.” For the 9/11 anniversary, the place was made into a memorial. Pictures of scenes of the day taken by a retired detective who was there that day were put up in the lobby and outside. Panels with links to a website for the families of 9/11 dead were set up. Fire trucks were parked outside. Memorial candles were placed on the sidewalk. A plaque with a poem tribute to firefighters was in front of the building. There was also a package that when touched would give someone a 9/11 t-shirt and hand-held candle. Residents passing by made their own contribution by dropping flowers on the sidewalk. 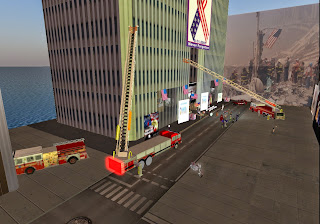 There was also a guestbook in which people could leave messages, Cheri saying, “I'm really glad the founder of the Africa sim asked if i had a guest book, which I bought right away as I think it is very nice to have. I will keep it here always as I will the Families of 911 website. ... Bethlee (Spad) created the lovely prayer plaque to distribute to all”

A media screen was also set up, Cindy Bolero streaming the documentary “9/11” about a group of firefighters whom were among those at the Towers that day. The film was originally going to be a in depth look at a rookie fireman, the camera taking casual scenes every day for the several days before. With the dark day, it took on a whole new purpose, showing the frefighters as they were going in, including some scenes taken from inside the north tower, not previously shown prior to this film. During the film was one firefighter whom anxiously awaited word of his brother, who was somewhere in the stairway of the tower. He was still in when it collapsed. The grieved firefighter was comforted by his peers, “Yesterday, you had a brother. Today, you have thirty.”

Of the people dropping by to pay their respects, many were in police or firefighter uniforms, often with tags identifying them in firefighter groups, “It is an honor to be apart of this remeberence.” There was also an avatar from the Justice League present as a security precaution against possible griefers.

Cheri talked some about the day, “... my son was at the World Trade Center every single day and that day he wasn't there. Also a cousin of mine worked on a higher floor and she had called in sick that day. ... My son's clients were in the towers though. He had courier service. Of course the business was no more after that but at least he lived.” Another resident talked about someone he knew living near the towers, and when they collapsed, a human torso landed on their porch. 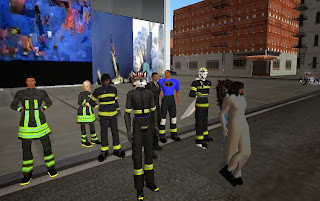 Cheri also talked about a near confrontation that night. Some Pakistani shopowners were supposedly celebrating the collapse of the towers, and a number of young adults were talking about going over to fight. Fortunately, the police were there to prevent an ugly scene. One man talked about how at first he wanted the kids to have gotten the chance to beat up the Moslems, but after some time to think instead invited everyone in the neighborhood, including the shopkeepers in question, to gather together for a vigil in honor of those who fell.

There was a little talk about the “Truthers,” those whom thought the 9/11 attacks were not caused by Islamofacist terrorists, but a secret plot from within the US Government. One man commented, “There were plenty of studied done on (the collapse of the towers). The jet fuel and fire caused intense structural damage. I actually work with the wife of the guy who lead it. ... sort of sucked for her. They got death threats and phone calls/letters from all the conspiracy theorists. He was one of the leads of the final independent report. Stephen Cauffman is his name: NIST report at: wtc.nist.gov.”

Besides Second Life Newspaper, the NYC sim's memorial was also reported on by CNN’s iReport, "Not all areas of Second Life memorializing 9/11 were as popular with many visitors. Some commented that a few individuals used the day to attempt to collect personal funds and/or celebrate the day in a less than solemn atmosphere. Many commented that the NYC area by Cher provided a 'tasteful and respectful' approach to remembering the impact of 9/11; making it an excellent community site in the virtual world for people to continue to visit and express themselves."

The vigil at the NYC towers continued throughout the day and night, people still coming in at Midnight. Cheri thanked people for coming by.

The memorial at dAlliez Land Headquarters sim was grand, but eventually it would come down, Alliez eventually passing away from cancer. The New York City Block would fade into the virtual nether a couple years later, taking it's Twin Towers memorial with it.