As a man (or furry) with five years behind me in Second Life, there’s things to be seen still. I heard about a classic car show held at Bay City so I checked it out. I was greeted by a nice lady named Uccle Poultry who told me all about it. Walking in, I saw cars from the 50’s that reminded me of the movie Back to the Future starring Michael J Fox. Also by dumb luck I met one of the Lindens, Tommy Linden. He was quite happy to give me his teddy bear and participate in the event. Anytime you meet any Linden, ask him or her for their teddy bear. 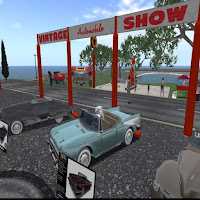 Besides being a classic car show, it was also supporting Childsplay, a charity that buys video game systems for children in hospitals. You can learn more at http://www.childsplaycharity.org/ One of the car sellers named Anthony who makes 2zoetic Motors cars said that half his profits will go this charity. Wanting to support Childsplay I bought his Regalla car for 750L.

An event I wished to see but was too late was a “Miss Bay City” Bikini contest held on the 18th. I’m writing this article on the 20th. Doh! 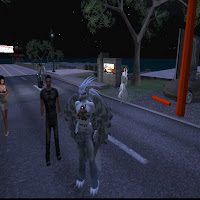 The car show is being held August 17th to the 26th. One of the main events that I was told about was a car wash being hosted  by Pygar Bu on Wednesday August 22nd that also supports Childsplay. His car wash is 10 till noon. If you happen to miss that car wash, you can still catch another the same day at 6-8 hosted by Ever Dreamscape. The last car wash is August 2-4 pm, also hosted by Ever Dreamscape.  The car wash donations go directly to Childsplay. I might have to check out one of the car washes with my new car.  The last day has a party with Benny the Boozehound  at 5-7 pm SL time the 26th.

Doing a random search I found a raceway to test out my new car. There were speed controls on the hud and also the option to change color of the car. Matching my white griffin self I kept the car as the original white. It was a thrill to both support Childsplay the nonprofit and drive around in a vintage car for kicks. 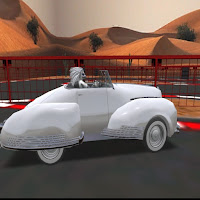 The car washes are hosted by Bay City volunteers ready to greet you and to wash your car.
Bay City is still looking for more volunteers to help with this event. Anyone who is interested is donating their time contact Marianne McCann or Ever Dreamscape.

If you get the chance check out the Hot Bay City Nights event. I had fun browsing around looking at the stylish cars, and actually buying one. Or if you have a SL car already, go to one of the car washes and get your car clean and support the charity Childsplay.
http://www.childsplaycharity.org/

Grease Coakes
Posted by Bixyl Shuftan at 6:00 AM No comments:

The Warbug Air Show at Madpea

On Friday July 27 and Sunday July 29, the Madpea gaming area, known for games such as it's Virtual Medical Doctor, hosted an air show by Warbugs. For those who don't know, the Warbugs are small aircraft made for fun little dogfights. While some are made to look a little like aircraft from WW1 or WW2, all Warbugs have the same basic tiny and round "bug" body, with small wings and tail. Not too difficult to fly, they can fight in any scripting-enabled area, and when hit begin spinning out of control to the ground, leaving a trail of smoke. 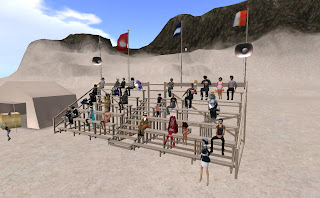 To meet opponents, as well as holding events, the Warbuggers have their own group in which to issue challenges over IMs, or organize a party or larger battle. For official scores, the fight has to be made in places with a Warbug Rezzer and score system. The Warbug website lists three places for dogfights, WarBug Headquarters at Black Forest, Panda Bay at Picturesque, and Heaven's Pirate Cove Beach at Winter Faire. One can fly and fight for free by getting a temporary Warbug at the rezzer, or at the Headquarters one can buy one at Arduenn Schwartzman's store or get one from a Lucky Chair.

The chatter on the Warbug group can be a little random on occasion, but most everyone has fun, either at the small dogfights or events. And their biggest event of the year would be at the Madpea sim of Tupol Island. 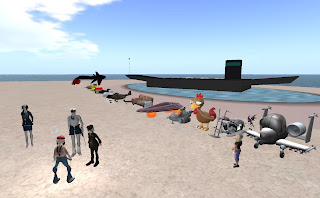 I wasn't able to attend the Friday show, but I made it for Sunday. The three hour event had three parts. At 1PM SL time was the Plane Art Parade, where various Warbuggers could show off their planes, which were usually quite different from Schwartzman's planes. The craft included spacecraft, a flying red skull, a doghouse, and even a flying couch with guns.

The Warbuggers themselves were also a random lot, some in uniform, some in rather skimpy outfits. Among the normal humans were tines, a kid avatar, cartoonish avatars, and even a dog. Arduenn went around in an official-looking officer's uniform with a strip of beef jerky in his mouth. Each of those in the Plane Art event had a few minutes to show off his or her aircraft. Then at the end, they were asked to line up behind Arduenn, whom used a copy of the Warbug plane that was free to pick up for the event. It looked like it was covered by blood splatter, and the pilot danced around in it instead of sitting. He led the planes up, the group circled around a bit to give the audience a look, then he developed lag trouble and crashed into the viewing stand. Once out, he commented he'd made a perfect landing. 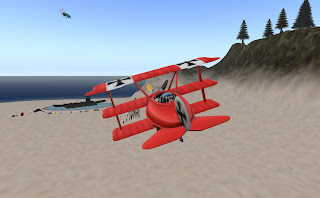 Then at 2PM  came the "Battle of the Aces." There would be three fights. The first was a ten plane free-for-all. The best four in that would be finalists for two one on one fights. The winners of those would then duel to be the winner. For the first event, however, there were only five Warbug aces around. So Arduenn asked people from the audience to step forward. A few did, then after a period in which no one else did, a certain reporter joined up. I had picked up a Warbug from the Relay for Life Track a couple weeks earlier, but was asked to use one of the bloodsplatter ones. And without much experience, I ended up heading to the dirt. 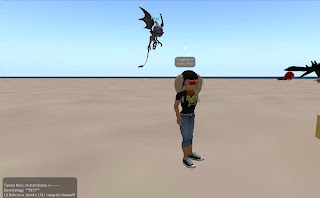 The two finalists were were Kingclulex and Tianna Akiri. Their dogfight lasted for some minutes as the two pilots fired and weaved. Fnally, Kingclulex's red triplane began smoking and headed down. Tianna, the kid avatar with a "Rising Sun" bandana on her head, and a cookie in her mouth, had emerged as the top ace. She was given a gold trophy with the other semifinalists given silver. All other participants got a bronze.

And once the awards were passed out, it was time for the dance. Warbugger ace and pilot alike, along with the audience, danced away as Stacia Reinoir DJed the tunes. The music was usually an air theme, from "Fly with Me," to "Airplane Mode," to "You Fly Me," and others. There was much kidding around as one guy kept joking his country could use the Warbugs in his country's arsenal, one of the tines was making "nose beeps," and more. Arduenn thanked the staff at Madpea for hosting their air show.

It was a fun time for this group of unusual pilots with their small and stubby but fun airplanes.

For more information, one can check out the article of the "official Warbug correspondent" Pixie Rain Here (Caution, other articles may not be work safe).

*Update* Chating with Kingcluex, he reminded me the trophies were for the Art event, not the air combat. The top dogfighters were given medals instead.