On Tuesday December 27th, CNN producers Nichole and Henry iReport announced that the sim owned by the popular real-life news network would be closing down. There would be one last official event, a farewell gathering, two days later on Thursday December 29th.

I showed up early, ten minutes before the event. Only Daniel Voyager was around at the time. But then Pooky Amsterdam dropped in, followed by iReporter Janey Bracken, whom had written about the closing for CNN. And as 2PM arrived in came more people. Nichole and Henry iReport showed up, as did other iReporters and others in Second Life media. There were a few other noteables such as DJ GoSpeed Racer. And there were just plain folks whom had heard about the place and wanted to see it. Close to two dozen were attending at one point.

For the first hour, we talked about various subjects, notably the island’s limited time, many of us seeing it or an event here for the first time. Someone called it sad in another way. In it’s heyday, a number of real life companies had set up a place on the Grid. And now the small list of those that remained was getting still smaller. But there were happier topics. Someone mentioned Daniel Voyager’s birthday had happened just a few days earlier, and there was joking around of getting a cake, with or without a dancing girl inside. There were also jokes about Henry iReport’s “noob” appearance. Some mentioned how they first found out about Second Life. People also talked about the upcoming year, and were hopeful. 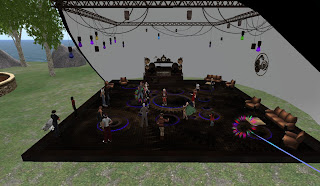 A few minutes before 3PM SL time, the meeting moved to the dance floor set up in the northern part of the sim, with Grace McDunnough playing the tunes. Someone changed into a 18th century naval uniform, looking pretty odd next to the disco & rave lights. Someone else mentioned fireworks, and a few were set up outside the dance area. For those with their viewers set to midnight, they were a colorful sight.

From about 3:30 to 4 SL time, people began leaving, thanking Nichole and Henry iReport for helping to keep the island there for as long as it was, as well as iReports in Second Life. Nichole reminded that while this would be the end of CNN iReport Island, the group itself would most likely remain. She told more information would be available later. 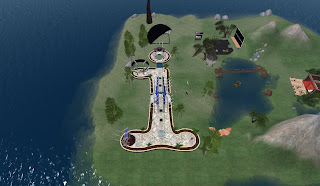 The sim itself is still up, and will remain until sometime in January when the tier runs out. People can still go there and pick up the iReports package, which includes a CNN T-shirt and baseball cap (default wear position on “nose” for those with attachments there). The island itself has an “i” shaped structure just west of the teleport entry area, with a small meeting area with seats making up the dot. North of that is the dance area. The middle of the sim has a small drive-in theater where one can see a few old news reports. The rest of the sim contains various outdoor scenes, hills, waterfalls, and bridges.

Daniel Voyager has his own article on the event, as well as a number of pictures on his Flickr (note: Daniel’s total number of screenshots there just reached 20,000). For any questions regarding CNN or CNN iReport’s plans, Nichole iReport says she will try to answer them the best she can from her email address at nicole.saidi@turner.com . 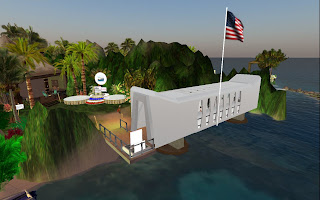 At 2PM SL time on December 7th at the Oahu sim, a number of residents met at the USS Arizona Memorial. Some were locals whom made the island their home or hangout in Second Life. Others were veterans, or from tribute groups such as the Flying Tigers. But all had come to pay their respects.

The service began with a recording of the song “In the Arms of an Angel.” Next was singer Roxanne Ysabel, doing a performance of “America the Beautiful.” Then came a five minute segment of President Franklin D. Roosevelt’s “Day of Infamy” speech, which was followed by salutes from the vets. Technical glitches kept some from hearing the sounds at times, but it was cleared up by the end of FDR’s words.

Twstd Ruggles, one of Oahu’s residents, then addressed the crowd, “Aloha and thank you all for coming today to our special memorial services remembering 70 years ago the day Pearl Harbor was attacked. I had planned to do this speech in voice, but SL isn't being kind so please bare with me. Coming up we will hear music from the lovely Ichie Kamachi, hula dancing, prayer, and then we will all go to the deck and launch our leis into the sea for remembrance.” 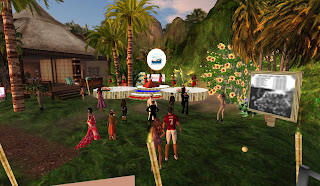 “One more thank you to Kitilla Cortes for making this awesome replica of the USS Arizona Memorial Structure. This is our 3rd year having this event and I can't explain in words how much this means to me. Everytime I come here and visit, I can't help but get choked up hearing all the names of the people who lost their lives 70 years ago. So today I want to honor those people and I thank you all for joining us as we give tribute to them today. So without further delay, please toggle your audio as we enjoy a few songs from the very talented Ichie Kamachi!”

And then Ichie, a real-life Hawaiian, took to the stage and began singing to the crowd with the velvet voice she has been noted for. She sang two songs, then came a hula dance presentation by Oahu sim residents in native costume led by Szerwerp Loon. This was followed by a prayer by Chaplain Stan Teva.

“Roosevelt, who was never at a loss for words, said it was ‘a date that would live in infamy.’ Military leaders said it was the most disastrous defeat that our military had ever suffered in a single day. Let us pray, Dear Lord, creator and sustainer of all things, we offer this humble prayer to you this day. We understand that this world is full of good and evil and that you have given us the freedom to choose between the two. Today we remember a day when men choose evil. The day that Japan attacked Pearl Harbor and dragged the United States into the darkest of all wars this planet has seen. We remember the people on both sides that gave their lives and pray for those that are left behind seventy years later. We thank you in this hour of need you gave us these people, America's ‘Greatest Generation,’ when our need was greatest. We also remember the brave men and women that stood their ground against this evil both at home and abroad to ensure freedom would prevail. “

“We stand here next to the Second Life memorial to the 1177 sailors and marines that lost their lives on the USS Arizona during the beginning of the attack. It is here also that we remember that thousands of sailors, soldiers, airmen, marines and civilians that lost their lives on this day. Help us all to remember Pearl Harbor and keep America; no, not just America by help us keep the world alert against any attacks against our freedoms. Let us not bring shame on those who still lie in the quiet places through our indifference or forgetfulness. They gave it all and showed their love as you taught us in John chapter 15 verse 13, ‘There is no greater love than to lay down one’s life for one’s friends.’ “

“We give thanks for the brave people who embodied your love by making this ultimate sacrifice on this day. May we be willing to follow their example when duty calls. We also give thanks for all the men and women that made this ultimate sacrifice during the war that followed and during the many wars and conflicts that have followed to this day. And let us not forget the survivors and families that have gone on to contribute to this world of ours. War is an unnecessary evil that we must live with until all of mankind rejects their selfish nature and accepts the Truth. Lord, we humbly beseech thee to guide us and teach us so that we can bring glory to your name as the people we remember today did seventy years ago.”

“In the name of Jesus Christ we made this prayer, Amen.”

Chaplain Stan continued, “Don't forget the next event in today's program is the launching of leis into the sea in remembrance of the fallen. To your right, my left, at the front of the Arizona Memorial is a sign at the end of the deck to launch your lei. Please click on it in remembrance of those who have gone before us.” 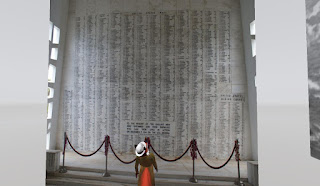 It was then that the residents walked to the USS Arizona memorial. One by one, they clicked on the launcher, and a circle of flowers fell into the water, stained with a bit of oil that would occasionally bubble up from a simulation of the wreckage below. The memorial itself was a permanent structure, that would read the list of the men who perished on the USS Arizona, giving one name at a time every so often. The virtual memorial had pictures of the real-life one, in addition of those of the Arizona and it’s crew. At the far end of the memorial was a list of the fallen carved in stone.

As residents threw their leis in the sea, the hula dancers began their second performance and the last part of the Pearl Harbor tribute. Residents gave their thanks to Twstd Ruggles, as well as Szerwerp Loon.

“Thank you that we could participate this special day.”