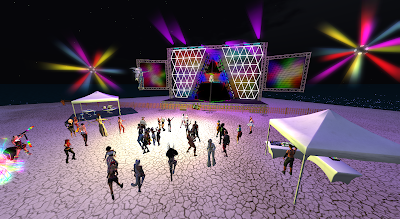 I have had several very busy weeks in sl. As a Ranger at the Burn2 event most of my time was spent on the playa helping. There was one final celebration that included anyone connected to the event in any way, Leads, artists, Dj’s, Rangers, Greeters, and visitors. It was great fun!
One more event will take place and that is the Skin Burn. It will take place on October 29 at 12 and 6. “What is Skin Burn?The BURN2 Skin Burn is a decompression event that features an “encore” Man Burn, usually 1-2 weeks after the closing of the annual BURN2 event held in late October. We Burn the Man again, with everyone in their best low-lag form. We are challenged to get wildly creative with it, too!” More information will be sent before the day. 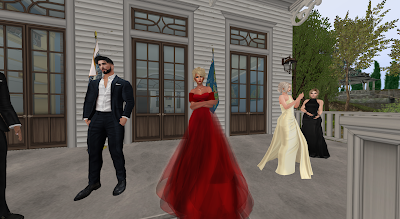 I managed to get away to attend the installation ceremony and ball for the newly appointed Ambassador for the Jeogeot Continent. Everyone in attendance sat on bleachers outside the Embassy to witness Abnor Mole hand over the key to Bel ,,,, Bel addressed the audience saying, 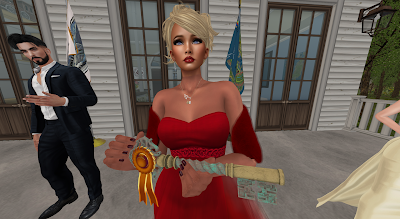 "Almost 3 years ago I found the BBB and with it came Boo, Sun, North, and then me. Boo setting up office in a houseboat.
Then it was Fi’s house and from there to a cabin and then to a stilts home. Then to where it is now. Lots of moving and lots of memories.I am more than a little bit excited at being given the opportunity to be a member of the BBB again...good old memories!I want to thank Everyone for allowing me to return as the Ambassador of Jeogeot. Lots of new faces and identities for me to get to know As Ambassador of Jeogeot I want to integrate the things that Jeogeot has to offer and is known for. And to integrate the things that Bellisseria has to offer to all of Second Life. I shall continually update new adventures and areas of interest, while bringing to Jeogeot the larger-than-life areas of interest of the rest of Second Life" 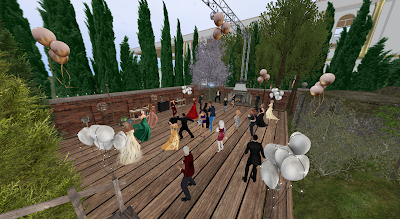 Everyone offered congratulations to Bel and we then adjourned to the party area that was set up next to the Embassy property and had a wonderful time dancing and chatting. The BBB (Bellisseria Bureau of Bureaucracy) is the sponsor of all the embassies and ambassadors across the continents of SL. 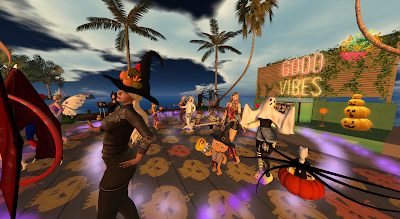 I did get to two pre-Halloween parties in Bellisseria also after the Burn2 closed. DJ Bela hosted one and DJ Far hosted another. My next project is to get to see some of the spooky places set up before Halloween is over. 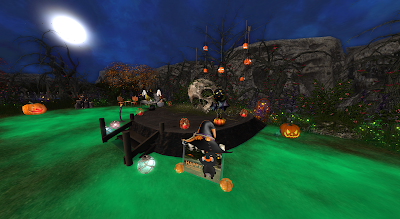 Our dear Hammies have set up a wonderful Hammieween at the Bellisseria Fairgrounds. Stop over to check it out and see if you can attend a party there too! There are games and a hunt going on.
http://maps.secondlife.com/secondlife/Bellisseria%20Fairgrounds/163/232/24 Touch the door and teleport up on the map.
Gemma Cleanslate
Posted by Bixyl Shuftan at 6:00 AM No comments: The Octoburn at Burn2 is getting closer by the day. I have visited Deep Hole and am happy to see all is in place in the town of Gerlach The horse rezzer is ready to take you on the playa on horseback if you like. I love to ride the roads on my horse when it is not busy or when I am patroling as a Ranger. This is the major event of the year and many regions are added on to Deep Hole to accommodate those who want to come. There are still a few parcels available so stop over to get one.
http://maps.secondlife.com/secondlife/Burning%20Man-%20Deep%20Hole/137/36/24 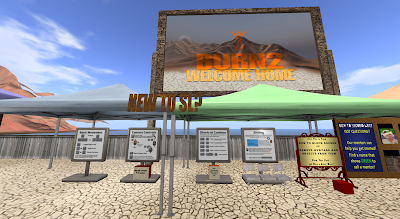 If a newbie arrives at the event there are helping posters set to aid them in movement and control of their avatar, as well as clothing for their beginning. Mentors are available to guide them too. 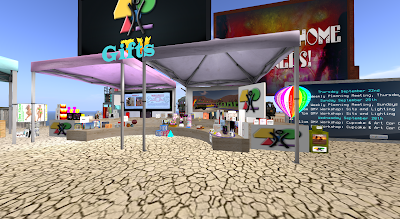 The gift tables are filled with gifts from the past events and new ones so stop there to get them all before you go riding. There are some fun things there.
All the regions for the burn are ready for installations and so many have already brought their creations in and are tweaking them, as usual. Over the years I have learned no matter how spectacular it looks to us artists never think they are done. 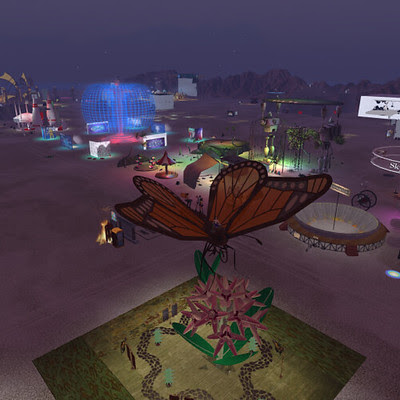 I heard the most interesting story from Jeff Olhoeft (jolhoeft Resident. Last Octoburn he and collaborators, ღ..Lyric..ღ (lyricsheart Resident and Magii (Magic2life Resident) created an installation that was lovely by day and lovely by night. It was called Metamophosis. Lyric wrote the beautiful poetry that was there. This is one of the poems that was on the art piece.

Becoming (Magic)
When I was a caterpillar
munching for life
I had a yearning inside for more.

Excitedly I opened
revealing my inner magic.
I hooked the safest branch of the butterfly bush
Hanging for eons
becoming.

Never will I see my magnificence
Nor will I meet one who can reflect to me
the glory of my being.

I Am
The Last November Butterfly.

That is their Burning Man creation on the desert in 2021.They were so taken by it themselves when 3V (3vilyn Resident suggested the idea of bringing it to the desert they decided to recreate it in real life and take it to the Burning Man on Black Rock City in 2022. Wickedtruth helped them with arrangements. And They did!!! Here is their build August 2022. What a wonderful tribute to the creative artists of our regional burn and Burning Man in second life. Usually I see rl coming into sl. Perhaps this has happened before but it is a first to me. I love it!
Want to volunteer for the Octoburn? https://www.burn2.org/event-volunteer-application/
Come help. Be a  lamplighter or a greeter or what you like.
Gemma Cleanslate
Posted by Bixyl Shuftan at 6:00 AM No comments: