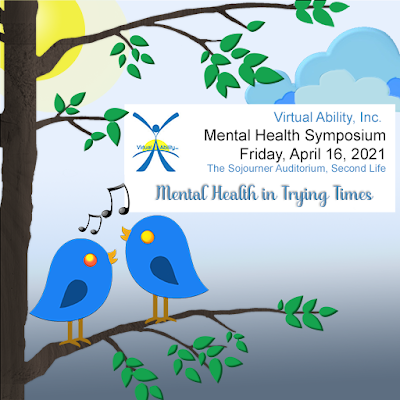 It was a busy informative day over at Virtual Ability Island. The Mental Health Conference went very well. I am a greeter for events there and love meeting all the attendees. I don’t get to attend the all the presentations so am thankful they will be on the Virtual Ability Youtube website.
https://www.youtube.com/channel/UCecFbqrNpnAbfaEohz8HIhQ . 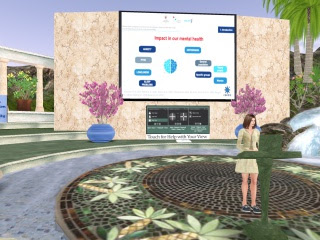 I was able to attend Claragonzalezsa Clara Gonzalez Sanguino’s presentation. She is the Anti-Stigma chair at the Complutense University of Madrid in Spain. Her talk was about their research on the effects of the Covid 19 on mental health and its contributing factors. There are so many factors to consider . Since Spain has had four surges there was an enormous amount of data for their study and it still continues. Questions and answers were most interesting. You can see it all on the website. People from many countries attended the event and stayed for all the presentations. 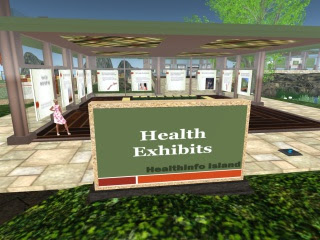 I was reminded to take a trip over to Health Island in the next region during a break where I have not been for a while. 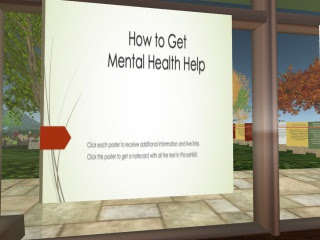 As I walked the island I remembered how much is really over here. It is well worth a visit if you have not visited.  I made a stop at the Health exhibits pavilion where the concentration this month is Mental Health . It changes every month. There are resources there for all sorts of issues. Stop by. 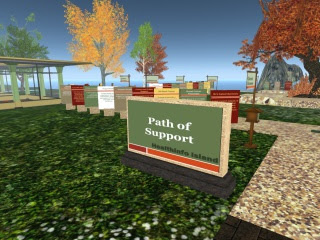 I visited the Path of Support also. This is an wonderful path to walk. Here you will find the names of groups in sl that are helpful to almost any possible issue one might have, mental or physical. I have brought people looking for  somewhere to vent  to someone who understands what they are talking about and perhaps offer help and support. 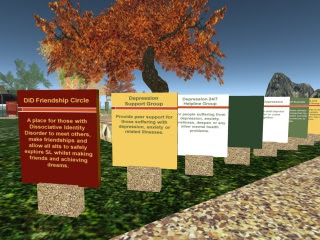 Go see if you find a group you would like to join. Here is the entrance to the Island .  http://maps.secondlife.com/secondlife/Healthinfo%20Island/128/126/24 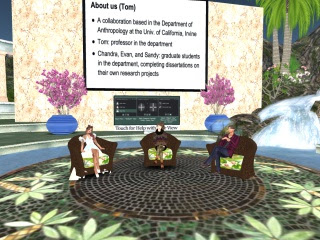 Later in the day I was able to attend another presentation. This one I found fascinating because it was about the impact of virtual worlds during the pandemic. Tom Bukowski, Professor in the Department of Anthropology at the University of California, Irvine and two graduate students, SandyZan and Ev Anthro (Evanthro),  using a research grant ventured into virtual worlds to search out information on the use of virtual worlds during this agonizing time. They did research in Second Life and New Horizons and Animal Crossing but used the time today to talk about  their work on data from “Animal Crossing”. Again, it was most interesting and the Q&A was fascinating.Some of the data definitely overlapped with what was happening in Second Life.  Check this out also on the website above. 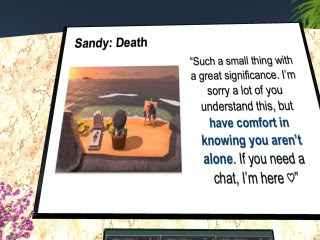 I am glad I was able to be there for part of it and will also watch the ones I missed. The whole day was a great success. One thing I gleaned from the day, especially Tom’s talk is how our virtual lives can help us survive the problems of the real world by being here in sl and send us back to the real world to be able to cope more easily. Many found solice , hope and friendship during these trying times .

DJ Matt Raises Over 110,000 Lindens At The CRFB DJ Competition 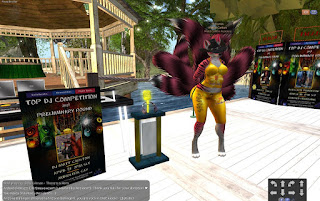 Matt Carlton, aka DJ Matt, already has a record of being one of Team Sunbeamers top DJs. But her performance at the Relay Rocker's CRFB (Celebrate, Remember, Fight Back) DJ Competition on Tuesday April 13 went over the top. By the end of her one hour event, she had raised over 110,000 Linden dollars. The event was held at Arinultra Cay's Pond Stage.

"100% of the dollars raised in-world goes to the American Cancer Society," Trader WHiplash would say, "with the lions share going to fund research. The Society currently funds nearly half a billion dollars in research grants. Other funds go to maintaining patient services and to helping our global partners around the world.  Some of it even comes back to Second Life, where the American Cancer Society region  is THE Official 'virtual office' of the Society, offering residents support, information and other resources to aid them in fighting and avoiding cancer. The American Cancer Society is one of only 2 charities officially 'vetted' by Linden Lab and all donations are directed by secure scripted kiosks and vendors to the Society's own Avatars and Accounts." 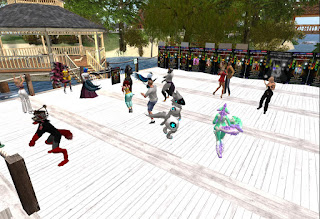 Matt had some personal reasons to Relay, notably her grandmother whom had passed away from cancer. Plus earlier that day, she had gotten some bad news. One older family member over the weekend was tested for cancer, and he'd just gotten a phone call that the results were positive. So from her point of view it was a personal reminder how important the Relay was. Her goal for the night was $60,000 Linden dollars, which was both the average raised at last year's DJ competition by each DJ and the most she'd ever raised at an event. A number of her friends dropped by to support her for the event. This included two she met in VR Chat whom had only just come to Second Life.

Matt's usual appearance is that of a "tigersune," an anthro half tiger/half nine-tailed fox. Normally it's reddish-orange. But due to a "Bid Me" event she took part in, she had pinkish fur for the event. Her music included a number of country tunes, among them, Randy Owen's "Braid My Hair," "When I'm Gone," Randy Travis' "Forever And Ever Amen," and others. 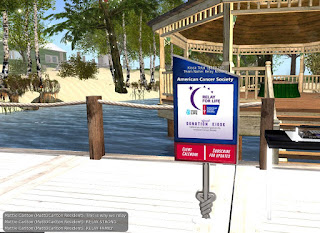 Finally the hour was up, and Matt had passed 110,000 Linden dollars raised. "L$110,205," Nulaa Maracas cheered, "$440 US in an hour!" A friend of Matt's commented of her grandmother and other family, "They would be watching you Matt, watching you from above and so happy. ... My Nan would be so proud of you Matt too since she does this stuff too and I help her."

Amazingly, Matt's total wasn't the highest of the DJs in the competition. One other, Stormy Dench, raised 200,000 Lindens.  There are five more left to go of the thirteen DJs in the preliminary rounds. If Matt remains among the top four, she moves onto the semifinals. But having raised over $110,000 Linden dollars, she has raised more in just one hour than many Relay teams raise in the entire season. Which makes her, as well as her Team Sunbeamers, a force to be reckoned with. 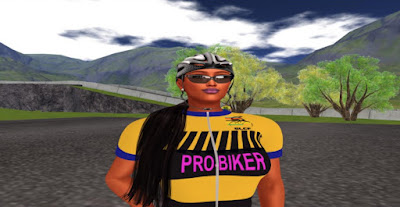 On April 11, our own Dancerina Starlight took part in the Second Life World Road Championship. The event included many residents all fighting for first place. This was her first race and she came in 10th!! Congratulation Dancerina!! 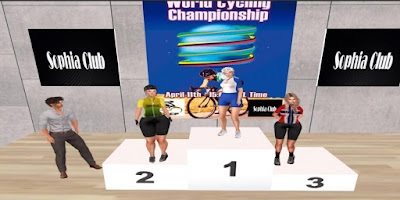 Claire now gets to wear the special rainbow jersey but only until she loses a race and then it gets passed on to the next winner when there is one. What impressed me was a comment she made at the end of the race, “yes tough race (smile) well done all.” I must admit that a smile appeared on my face because it was so nice to see Claire, after winning, congratulate the rest of the cyclists.

A big thank you to Sophia’s for sponsoring the race. There was also a party at her club, to celebrate. There was dancing!

I had a chance to speak with BillJobs64, the president of the Second Life Cycling Federation who was able to provide more information about the cycling federation. He tries to have at least one event per week. There are weekly challenges people can participate in. Prizes are given such as cash or medals but the most coveted award is the rainbow jersey. He has big plans, for instance they are building roads in the sky to organize road races with the possibility of having a Tour deSL race at some point in time. 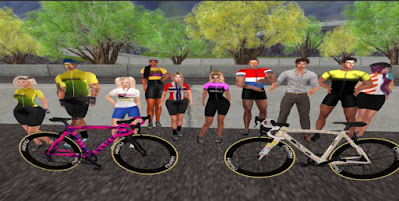 The next championship will be held in two months. Will Claire be able to hold onto the rainbow jersey or will she have to pass it to someone else who can peddle faster?