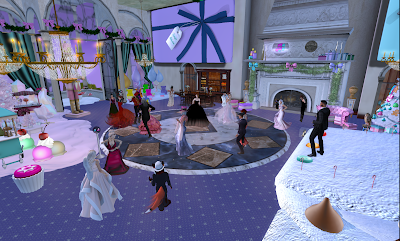 The weekend of Saturday December 7 and Sunday December 8 saw a number of happenings, such as the Designing Worlds Christmas party, the Chateau Trikassi Holiday Ball, and various events at the Christmas Expo. But there were others. On Saturday at Noon SL time, the Confederation of Democratic Simulators held it's Inaugural Ball. 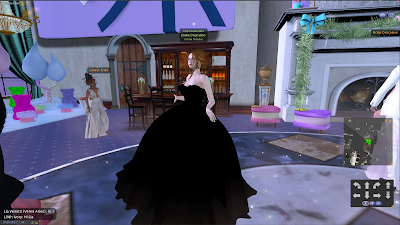 The event was held in honor of the community's new Representative Assembly and the new Chancellor, Emilia Dagostino (Emilia Avindar). The theme was "Sugar Plum Delights," with lots of candy decorations around, as well as couches made to look like cake. "Your buns will be frosted," someone mused. Emilia spoke of the set, "thanks to Lyubov who couldn't join us after working all night with Lilith (Ivory) last night!" 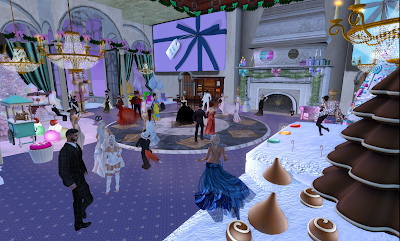 Other community noteables such as Rosie Gray, Hand Held, former Chancellor Kyoko, and others were also there. "Thank you for two wonderful terms, Chancellor Kyoko," Hand Held would say. DJ Dino Viper provided the tunes for the fist hour, live performer AleyKat sung for the second. 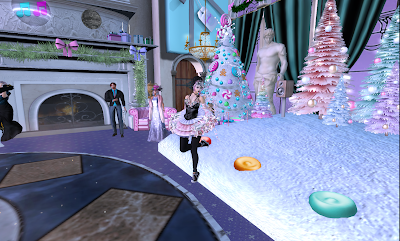 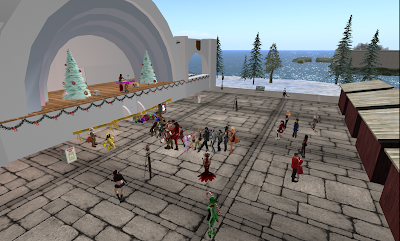 For Sunday, the big event was the "Annual Tree Lighting, Concert, and Fundraiser" in Bay City. Local residents of the community and their friends headed to the community center in North Channel for things to start up at 1PM SL time.

Welcome to Bay City's annual tree lighting, music event, and silent auction!" Marianne McCaan, Bay City's most noted resident greeted everyone, "The silent auction is ongoing, and there are some great deals to be had! Check out the goodies just south of the stage/north of the skating rink." 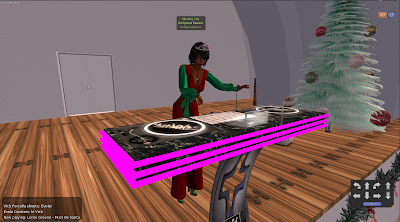 For the first hour, the music was provided by DJ GoSpeed Racer. She played music from classic Christmas shows such as "The Grinch," as well as traditional songs of the season and some more modern twists. Her audience in and out of Bay City was from around the world, "Listening in I have the US, UK, Spain, Sweden, Denmark, France, Canada, and the Netherlands!" 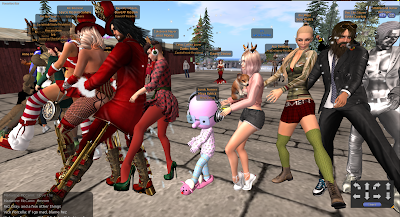 Many of the audience got into a conga line. This included artist Moya Patrick, and even Lacie Linden joined in. "I look forward to this conga line every year now," someone would say.

One resident, Moo Money, was the subject of some bovine humor, which was "udder chaos." "I'd like to submit a cow abuse report," she mused. 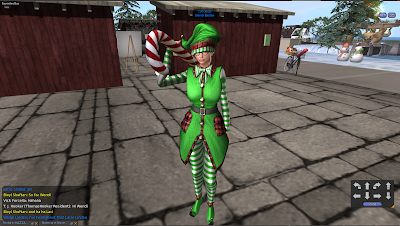 The other Linden at the party, Wendi Linden, was dressed for the season. While April Linden was asked about, it was explained she was busy with something at the time. 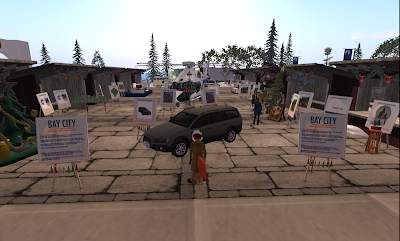 Not far from the dancing were the silent auctions. People would bid on various items, and those outbid got their Lindens back. The high bidders would get their items at the end of the event. The money raised went to the Child's Play charity, which provides games to the children of poor kids in hospitals. People could also just donate straight to the charity, Marianne announcing, "CaithLynnSayes also has put a donation into Child's Play on Bay City's behalf, to the tune of US $500.00." 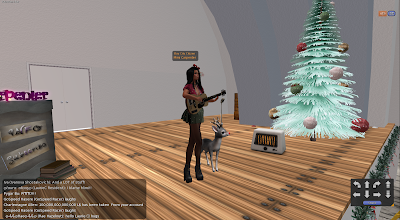 GoSpeed's last song was "John Denver and The Muppets - Twelve Days Of Chirstmas." After the first hour were live performances by Mimi Carpenter and Wolfie Starfire. 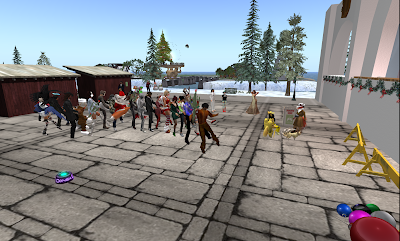 It was a fun event for all. But this won't be the end for Bay City's fun this month. On New Year's Eve, the city is host to the annual "Prim Drop" event to ring in the New Year.