While some people have a distrust of certain others who don't look or act like them in Second Life, the "tinies" of Raglan Shire are usually greeted with smiles by all. With their cartoony appearance and whimsical way of talking, their reputation is that of a happy and friendly folk. So what would get them mad and angry? Not much it seems. But on Friday January 11, many went to protest at Governor Linden's Mansion in Clementina.

The reason for the anger, a bug in anupdate to Second Life in late November. Jira "BUG-225893" filed by Chaser Zaks described the issue. 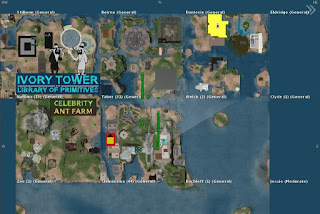 Ever since 18.10.25.521081, Me and various other people have noticed that avatars that are full mesh and not normal sized (EG: BentBox Imp) are floating 0.2 to 0.3 meters off the ground. This was not the case a few days ago where the avatar would be much lower to the ground.
This is not a viewer issue because it happened overnight on various viewers, including the official viewer. No viewer updates were involved.
Did something get changed on the asset server, or did the physics shape server side get modified?

While hover height can be used to correct this, it shouldn't be needed. Expected behaviour of an asset being changed like this is a big deal.

The Lab didn't fix the issue. So preparations were made by the tinies to have their voices heard. 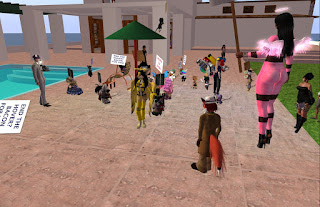 The tiny avatars of Raglan Shire along with Dinkies and Titchys around the grid will be marching in protest on Friday at 2pm, seeking a fast resolution for our inability to keep our feet on the ground!  The protest will take place at Governor Linden's mansion.

So on Friday January 11 at 2PM SL time, dozens of protesters headed over to Governor Linden's Mansion. The sim's 45 avatar limit was quickly reached, and those who couldn't get in headed to a smaller protest in the shore of the Taber sim to the north. Just to the west was Natoma where the Ivory Tower is, and a number of sims further west was Luskwood and Bay City. But that day, the Mansion was the focus of the news with dozens of avatars with protest signs and a few pitchforks. 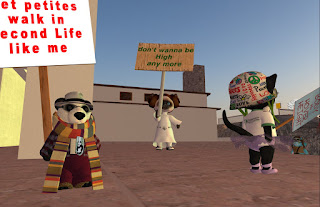 Many of the tinies were indeed hovering off the ground. Some stood on stilts so they wouldn't appear to float. They carried signs such as "I wanna come down man," "We want our paws back on the ground!", "don't wanna be High any more," "Let petites walk in Second Life like me" (carried by a prim tiny), "My body my hover height," "Let us Riverdance on the ground," "Lower Dinkies back to earth!", "Hover is over," and more.

Not all involved in the protest were tinies. Also there were normal human avatars, as well as ferals, a petite, and a Colossus avatar

"A hover bug that been going on since last year of November!" Nerxual Oh shouted, "This affects everyone, and we have to constantly change our over heights every switch we make! Second Life is fifteen years old, focus on us small people that make your dream a reality!" Linn Darkwatch yelled, "We can't even use hover height adjustment to fixt it because then we are messed up if we sit or lie down!" Bloodsong Termagant yelled, "New avatar makers can't make avatar rigs and animations properly!" "We opened tickets to LL, and we had no answer!" Mia Rose grumbled, "We want one!!!"

Governor Linden's Mansion was built by Stellar Sunshine, Second Life's first resident in the Grid's alpha days in 2002, and given to the Lindens before Second Life went to it's beta version. There were a few events here in the early days of the virtual world, including ironically enough protests on the issue of stipends. 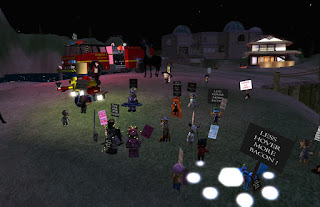 On the issue of the hover bug, I was asked to talk to Etheria Parrott. She told me she had talked to one of the Lindens who told her it was a high priority issue and they were still working on it. She then showed me a group announcement, "Anchor Linden has found the root cause for the issue, buried in the Bake Service. He has a fix for the problem, and it will be going out as soon as possible after it has been through testing and QA."  Etheria went on, "Whirly Fizzle had hinted to me that it might have been that new bakes on mesh code since it contains both hover and shape information."

The protest would go on for about two hours before the numbers in the sim began to dwindle. There were still people left before I headed out just before 4PM. I never saw any Lindens there, though it's a sure bet they heard about the protest.


Nitwacket would make a video of the event. It would also be covered in the blog "Second Sighting."

How much longer the "Hover bug" will last is unclear.

Addition: shortly after this article was published, Linden Lab announced there would be an update the next day to correct "avatars experiencing issues with hover height."

Monday December 31 was New Year's Eve. The last day of the year, and time to say goodbye to 2018 and hello to 2019. There were celebrations all over Second Life, and yours truly was at a few of them. 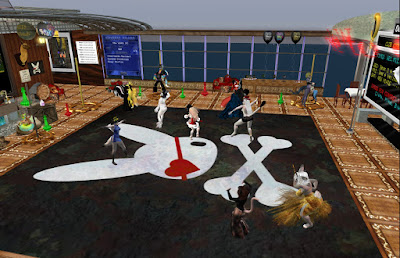 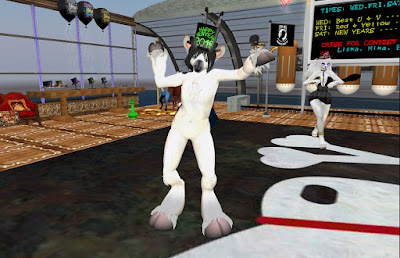 The usual 200 Linden prize on both of the contest boards was upped to 500 each that night. 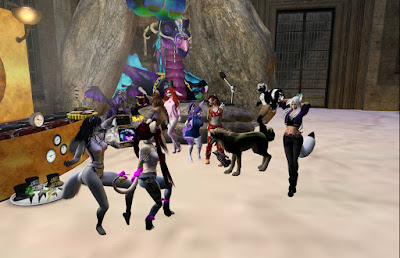 On Sunday December 30, the crews of the White Vixen Enterprises clubs, the Happy Vixen and Club Zero Gravity, had a party with a few of their friends at Nydia Tungsten's manor. 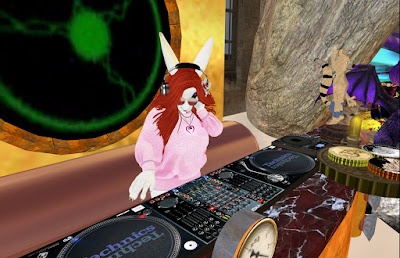 DJ Snowbuns played the tunes for the event. Normally, the managers, DJs, and hostesses of the two clubs can't enter the contests of any WVE event. But this special staff party was for them, with 4000L up for prizes. 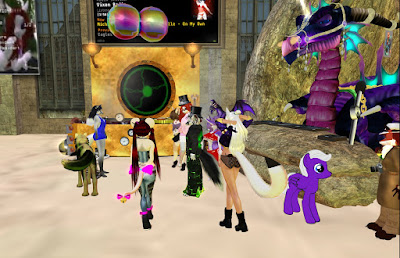 "Tonight's event was for ALL of you, to say THANK YOU for all you do for us, your work has NOT gone un noticed!" 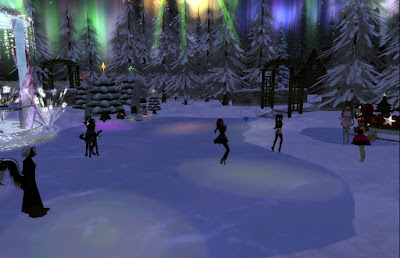 On New Year's Eve, Monday December 31, some parties were held early in the day for areas with numbers of European residents, such as the Roma community and Safra Nitely's Devon Dream. 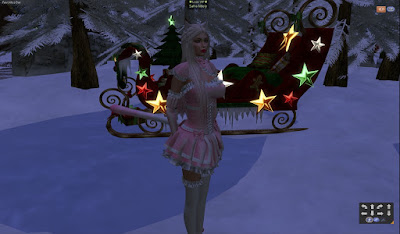 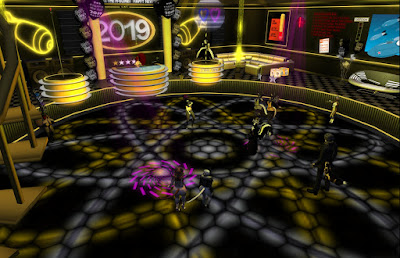 The H-Bomb Lounge in Olive, a few sims north of Lusk, also had a New Year's party. While the crowd was from Luskwood, the theme of the club was a big more PG-13. Haley Maruti/DJ Sqwrl, whom plays at anniversary events for the classic furry community played the music. 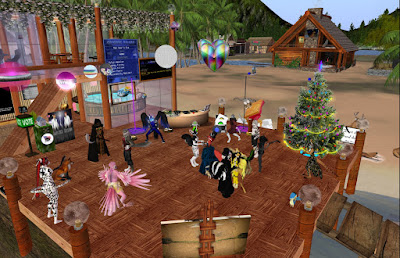 Earlier in the day, Club Zero Gravity had an event. The Sunweaver club that would have a New Year's Eve party in the evening was the Happy Vixen. 4000 Lindens were up for grabs for the best New Year's look. Sydney Fisher (Sydney Finchy) would win the prize. The party ended just as the clock hit Midnight on the US east coast. 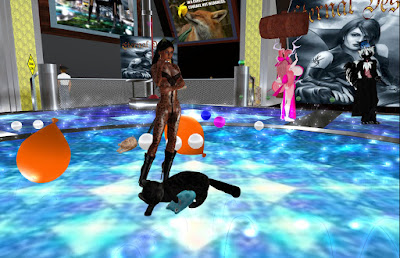 Eternal Desires New Year's Eve party had the music played by DJ Snowbuns. The club's owner Blackened Merlin was there. 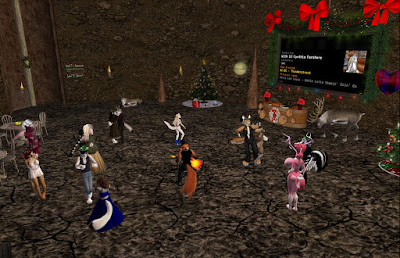 At the Goblin Cave in Caledon Downs, both the Sunweavers and Caledonians celebrated the arrival of 2019. This picture was taken after the party's peak when the sim was full. 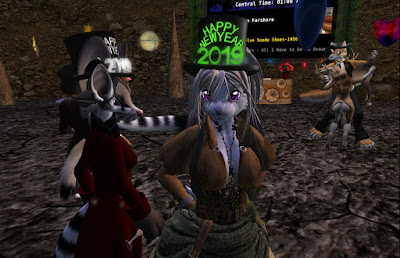 Duchy Cynthia invites all to come and ring in the new year at the Goblin Cave. When? Well Monday New Years Eve silly. Starting at 9PM and lasting at least till 1AM. I, your host for the party shall also play the tunes to dance to. Party favors and games like Yatzee, Greedy, Unno, Billiards and Cards Against Humanity available. 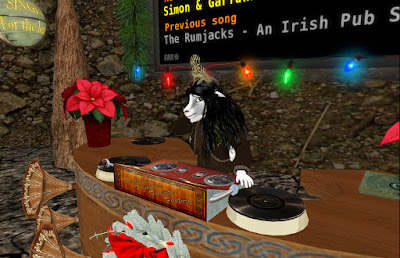 Cynthia Farshore, the owner of the venue and sim, played the music on her "Fabulous Fidelity Factory" as the four time zones across the continental US rang in 2019.

It was quite a party that lasted well into the night, some of the people were only to stay up through enthusiasm, a little caffeine, or both. 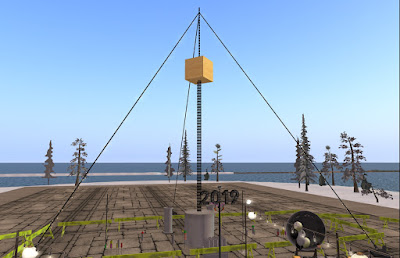 Bay City would have it's own New Year's Eve event at Midnight SL time, which was 11:30 PM, or 2:30AM EST. Quite a while to stay up for those on America's eastern states, but it boasted a Prim Drop, inspired by New York City's Ball Drop.

Yours truly sent an alt over. With the lag, I wasn't able to get a clean picture of the crowd. Fortunately Marianne Mccann had one on her SL profile page. 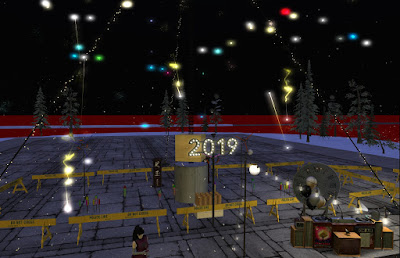