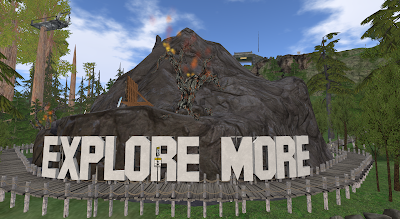 I have been spending quite a bit of time over at the Naturecon which is open until the 31st . If you have not been there yet, you are missing so much. After roaming the two regions I found little nooks of information about so many places to visit on the mainland that I never knew existed. I have a list and will get to some of them. 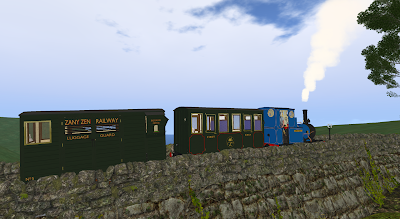 The train rides on the regions are fun. At the entrance you can hop on Cranston’s railroad that will drop you off at several levels where you can get to visit the booths of many of these places and find information about them. Hop on and off as you like. It will take you all the way to Mt Campion National Forest. The Zany Zen runs from the Lighthouse to the Treetop Overlook where the view of the volcano and the waterside in the distance are visible. There are also horse rezzers at many sites . 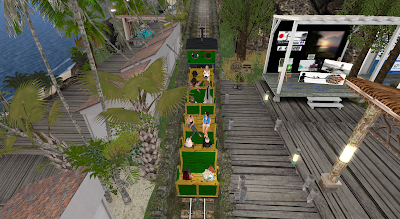 Strawberry Linden came to do a Lab Gab and I hopped the train with her for a ride . Her discussion and tour of the area with the organizers and team members was great fun. I had such a laugh when she hopped on the glider and fell off into the ocean. I really laughed out loud to see a Linden at the bottom of the bay asking for a tp! Watch the Lab Gab to see and hear more from all the team and see some of the locations. 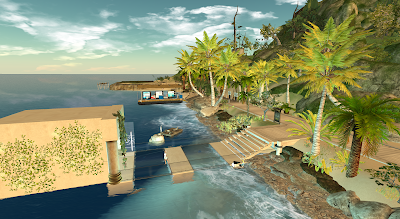 Speaking of the ocean floor do not miss the beach area and the installations there. Then venture into the underwater world to see its beauty. 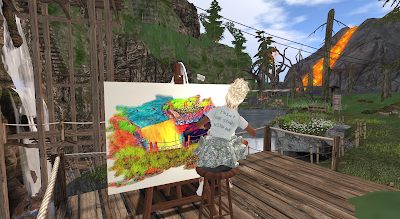 I entered the artist search contest to find the six canvases where one has to paint the canvas at those points and then send them off to Cranston Yordstorm for a prize. It too a while but I finally found all six with help from the hints on the instructions. The first one is placed right at the railway station near your landing point. 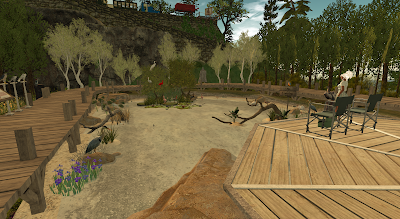 As a real life birder a visit to the Bird Observatory was a treat. Just sitting at the pond looking at the birds in the wetland was relaxing. 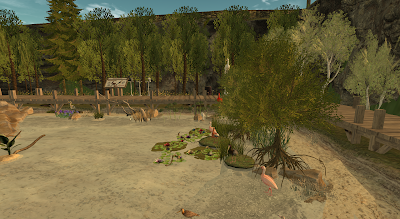 True Redrose and Lautlos Resident have information about importance of birds in our lives on the infoboards on the boardwalk.
This taxi will take you to the entrance http://maps.secondlife.com/secondlife/Ruthenium/139/93/34

Alice in Bell Fairgrounds and NatureCon 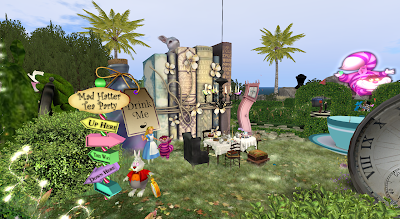 While you are waiting for Naturecon2022 to open take a trip over to the Bellisseria Fairgrounds to see a really sweet installation that Gracie (GracieAustinn Resident) has built. 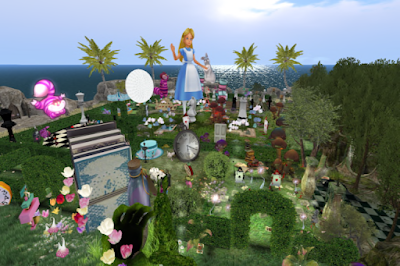 It will be there until Friday the 19th or Saturday the 20th she said. 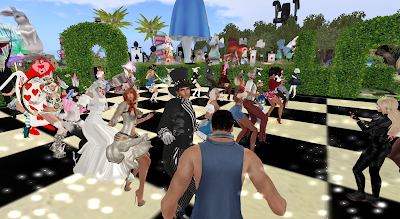 There was a really fun party to open it Friday. Many participants came dressed in costume to fit the venue. 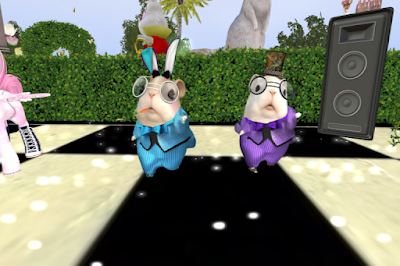 The banter and the music by DJ Far added to the enjoyment as he played songs from various holidays in the UK that were not familiar to many but brought smiles and laughter to all at the event.
Take a walk around and see the creatures of the Alice story that most of us remember loving then and still. 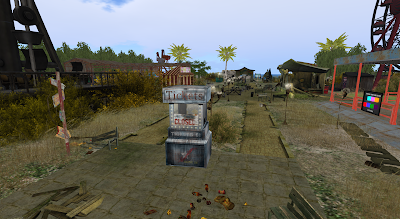 Then cross over into the abandoned carnival next door arranged by Tristan Elan. Jump on the rides that are still working though the carnival seems so broken and closed. We tried them!
http://maps.secondlife.com/secondlife/Bellisseria%20Fairgrounds/170/238/24 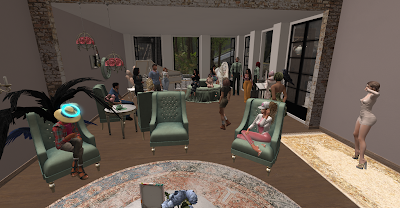 Naturecon 2022 is opening the 18th. There was a lovely meet and greet held a while back where those participating gathered to share their planned activities. There will be two regions for the event with many booths and installations celebrating the varied nature locations on the Mainland and Bellisseria. 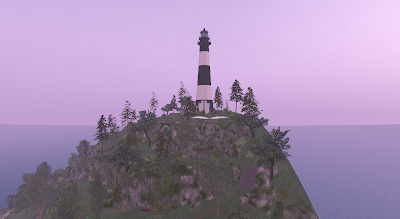 I went over to regions to see the layout . Placing the regions the Moles placed a mountain with a lighthouse overlooking all. Now the land is ready for the all the groups. Exhibit booths are in place.
There are so many places to explore all over the regions. 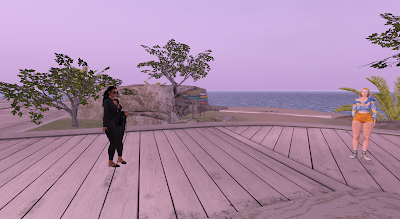 Soull Starlight and Yukiko Yeshto are putting in so much time and energy preparing for the week.
There are nature activities planned as well as live performances, parties and so much more. I believe some collaborators plan tours. Families are I invited to participate tours in special activities for them. 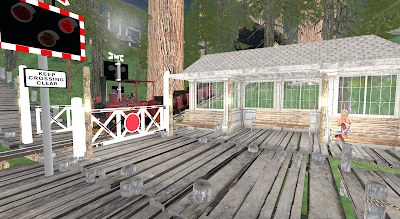 While exploring I walked up, up the mountain. On the side of the mountain I stopped in at a lovely Cafe ready with food and drinks for visitors. I found a hang glider near the summit and had an easy time coming down. I think there is rock climbing that I need to find. The train is running and offers a nice ride around the mountain with many stops along the way. 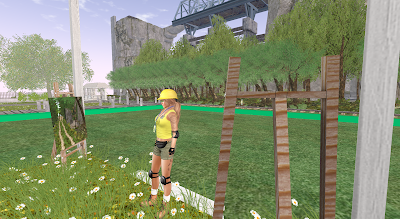 I found Hiroko Nubalo working hard getting the Mount Campion installation in place. She has nature trivia planned as one activity at the Nature Center on site. Her displays are so interesting at the mountain I look forward to it all. Next door I see that Pygar Bu has also started the Bay City contribution. It will be exciting to see the finished installations. Save time for this wonderful event that will last from August 18 through the 31st.

Here is the landmark to save also until then. It will put you right next to the train crossing and the office. http://maps.secondlife.com/secondlife/NC22O/128/67/23 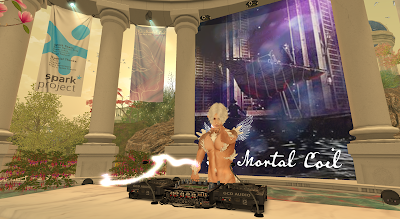 What a busy weekend!! I attended several functions that I intended to get to and made time to do it all.

My first visit was to the Opening of Spark at 10slt Saturday. 24/7 hours of music began.
DIRTYANGEL Iwish was the first dj with music that was both stimulating and soothing . There was a great crowd in the amphitheater . 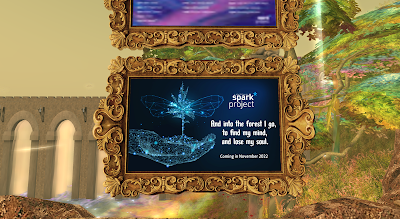 I spoke with one of the Spark team spoke with me and was thrilled with the whole event and the music too. He gave me a clue to the next installation already more than in the minds of the team.
ɠɛɠɛ ʄɛɖųƈƈı (OSMAN Genesis) in charge of djs was also present as were several other djs ready to go. Lots of time to explore the installation. https://slnewserdesign.blogspot.com/2022/08/the-mortal-coil.html 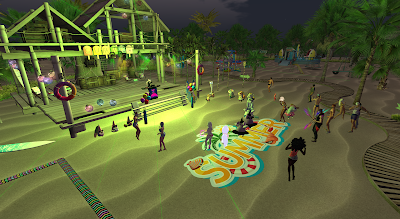 Later I made my way to the closing event of the Hammies summer fun installation on the Fairgrounds of Bellisseria. It has been there for a month with fun taking place on the interactive water slides and other activities. The party was great fun as usual and I learned that the next event by the Hammies will be Halloween.That should be a hoot! My last visit Saturday was to Mount Campion. Buried deep inside the mountain is a grand Cavern Club where there is music provided by dj ScÔt Kip NÔrth (ScotNorth Resident), who is also Ranger on the mountain. It was jumping with all many residents and guests in attendance. It was open to the public as are many of the events on the Mount. Teresa Firelight was there and reminded us that a huge anniversary party is coming in September. Time passes so fast! 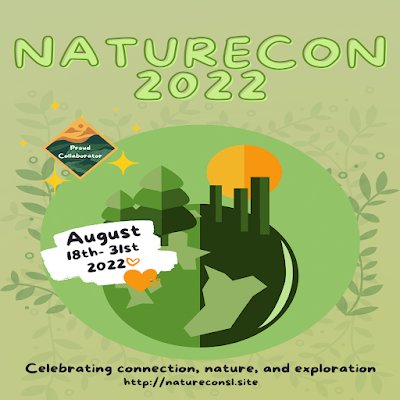 Sunday I took some time to visit the regions where people are getting ready for Naturecon. I ran into my friend Pygar of Bay City measuring their parcel. It is coming soon!!! Keep an eye on the website!
https://natureconsl.site/ 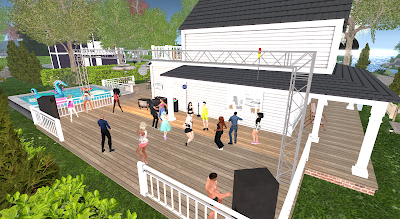 Then I stopped over at The house of Bellboy in Sweetmarsh to end the weekend at a casual party. Bellboy was not home but the party was going strong. Earlier I did run in the Linden Realms grabbing crystals for a bit. With all these parties I need lindens to tip the djs! Glad to see Monday coming!
Gemma Cleanaslate
Posted by Bixyl Shuftan at 6:00 AM No comments: