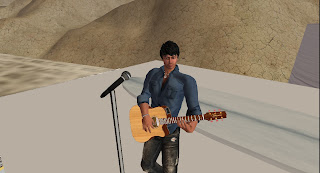 The playa is open!

The Burn2  Occuplaya opened with a great performance by Mankind Tracer at the meeting place. His tunes delighted the crowd. There were 57 avatars in the porta pottie stage area that was made by Neeks Karu. It began at precisely 12:00 SL time on Friday and continues until Sunday 11:59pm. 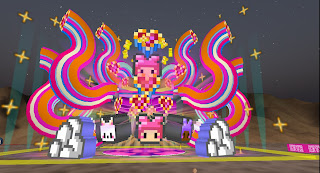 There is a full schedule of live performers and DJ’s playing while you dance and roam the playa. You will be able to take a tour around t to see the invited artists creations rising from the playa while you listen to the music. There are three invited artists who have placed amazing builds . The three artists are  Mikati Slade - Japan, Takni Miklos - Catalania, Spain, Fuschia Nightfire - Canada, and each creation is as diverse as you can imagine. 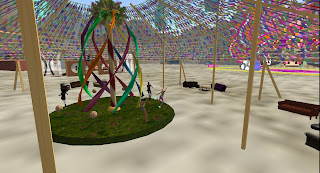 There is also a return visit of Avatar’s Garden of Particles from the 2007 Burn. Add to it, the directions are there. You will find it next to the sandbox. Yes, if you feel like playing there is also a sandbox waiting for you!! Just be sure to clean up after your fun. Pygar Bu created a colorful center camp for parties! There is a maypole in the tent. You can visit the gallery located in the northwest  corner of the playa, which is filled with pieces by various artists. While I was there, Sunnie Beaumont was conducting a poetry writing class.
If you want to learn more about the Burn2 visit the burn2 blog at http://www.burn2.org.  The real burn is set for October 20 through October 28 in 2012. There is a freebie tent near the saloon. Be sure to pick up a few nice gifts. This is a “decompression” event held in the spring.  Spend some time on the playa this weekend and get the flavor of it all. You will find donations kiosks around the playa. If you can, try to donate to keep the Burn2 alive in SL. http://slurl.com/secondlife/Burning%20Man-%20Deep%20Hole/134/18/24
Gemma Cleanslate
Posted by Bixyl Shuftan at 6:00 AM No comments:

Fantasy Faire 2012 is happening now through April 29.    The Faire is a fantastic event and part of Relay for Life, which collects money to help in the fight against a real world evil: cancer.  At the end of Day One, Zander Green reported that over $6500 U.S. Dollars had been collected for the American Cancer Society.  In addition to the featured sale items, many events are planned throughout the week, including music and dancing, Jail-n-Bails, auctions and more. 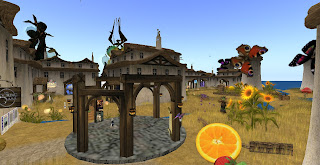 The Faire has eight Fairielands:  Devil’s Locket, Jungle Bungle, Nu Orne, Shadow's Claw, Shifting Sands, Siren's Secret, Meandervale, and The Tides.   I started at Meandervale (128, 68, 23).
Meandervale is a lonely sim sponsored by The Looking Glass.  It is decorated with giant sunflowers, orange slices, butterflies and windmills.  There are six featured stores and ten themed stores.  Clothes, accessories, wings, and more—there is something for everyone and every budget. 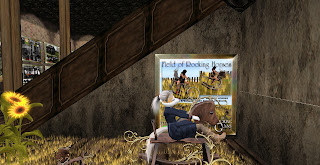 At The Looking Glass you can find all types of steampunk and fantasy clothing and articles for your home and castle.   If you don't have a castle, you can even buy one of those here, too.   Two of my favorites were Castle Ruins Lodge and the Wizards Retreat.  They also have boots, goggles, and capes.  There are cute Rocking Horses to ride and buy.   A whole section of the store is devoted to tinies, too.
Fantavatar & Moonstruck, which features clothes, shoes, and other wonderful items, are auctioning a one-of-a-kind fountain made especially for Fantasy Faire 2012.  The Pater Tiberino Fountain commemorates the day when Romulus founded the City of Rome in 753 B.C.   The god Tiberino is holding a trident in one hand and an amphora in the other.  The lovely sound of the water and the graceful butterflies make this a perfect item. 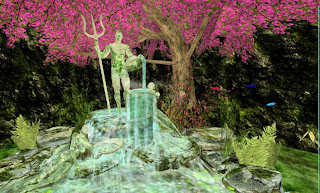 In addition to Fantavatar & Moonstruck there are five other featured stores: Boudoir, Weather! or not?, Material Squirrel Wings, Angelwing, , and Vaengi Wings, as well as ten themed stores.
At one of the themed stores, Grim Brothers, I found a great pair of Noah's Arc shoes.   They’re quite a conversation starter and fun to wear.  Even better, I know that my Lindens went to support a great cause.

Another themed store, The Elegant Goth, was new to me.  They have fun furniture like the Mad Hatters Tea Party and other interesting gothic furniture.   A few vendors are giving out freebies, such as a pretty fountain available at An Lema and an animated Forest Candle at Star Journey Academy.
But the reason for the Faire is to support the fight against cancer.   Kiosks and signs throughout the sim provide information and accept donations for this worthy cause.
For more on the Fantasy Faire, click on it's website: http://fantasyfairesl.wordpress.com/ .
Grey Lupindo
Posted by Bixyl Shuftan at 6:00 AM No comments:

From March 31st to April 1st, the Spring Burn or Mini-Burn, a spinoff of the Burn2 event took place at the Deep Hole sim. Gemma Cleanslate and I were a little busy that weekend, but still took time for a few pictures. 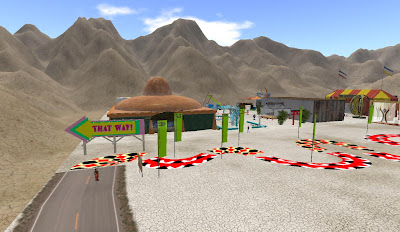 Here I am at the entry point of the Burn. The sign itself points to nowhere but desert. 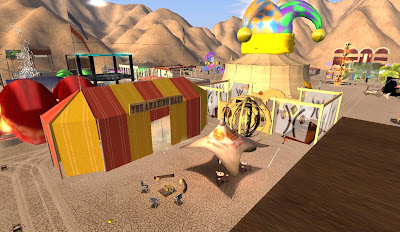 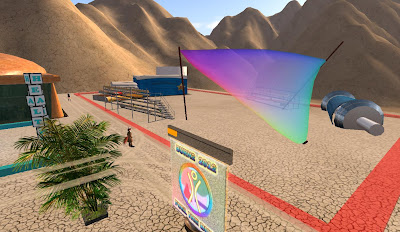 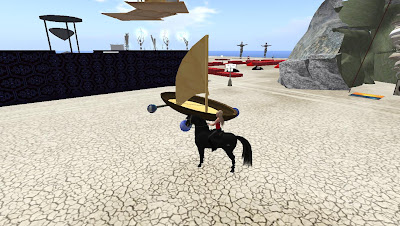 Gemma does a little horseback riding at the Playa. 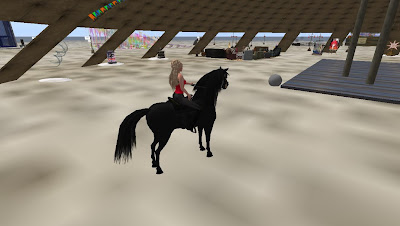 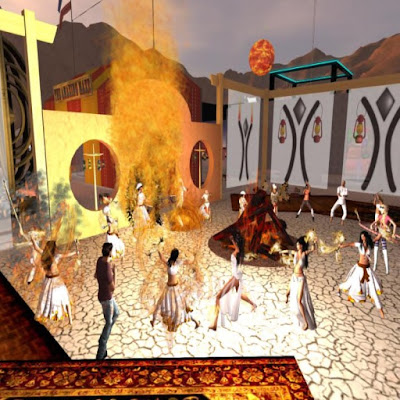 Gemma took this picture sometime on Sunday, some Nurners dancing around a bonfire. 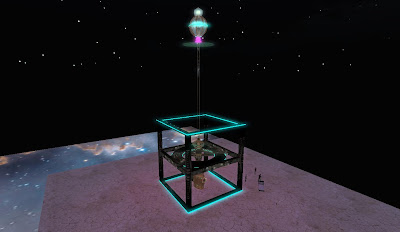 I hadn't gotten a picture of Qwark Allen's build at the Burn, so he later re-erected it for one. Note how it appears when viewed at midnight.

The main Burn will be in the Fall. Taking part over several sims over several days, it is one of the major yearly events in Second Life.