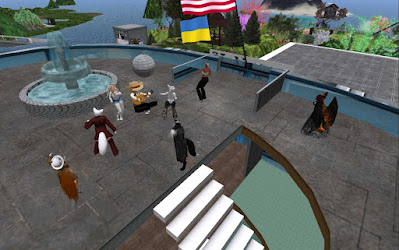 On Saturday January 7, it was the day for the Newser's New Year's Party. 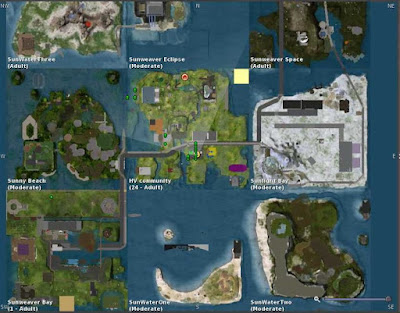 The Newser usually organizes two parties a year for it's staff and fans. Usually they're at a club. But by request they were on top of the paper's office at the HV Community sim. As the picture shows, at one point there were 24 in the sim, most at the party. 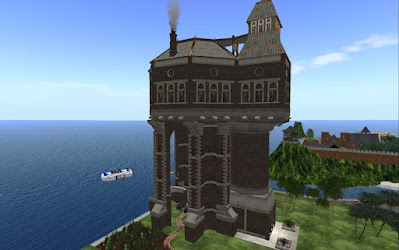 When the time approached for the party, I headed over in my rocket, passing some homes in the Sunweaver community. 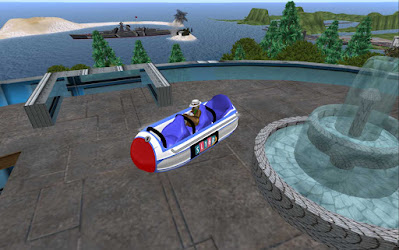 And soon got to the top of the office. 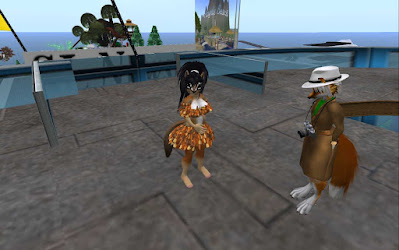 Rita Mariner was first there. Although at the hospital at the time, for a few days, she had occasional access to Second Life through her laptop. 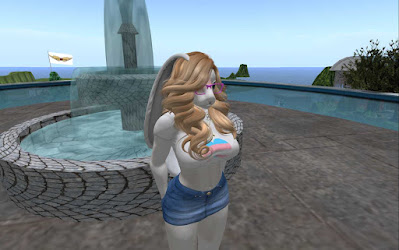 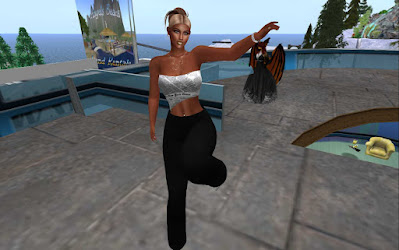 Dancerina, one of the writers. was there fairly early, around the time the party started at 12 Noon. 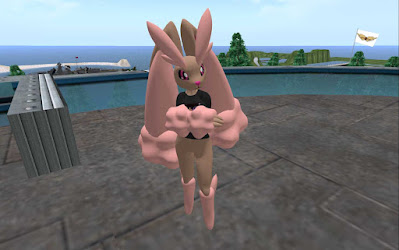 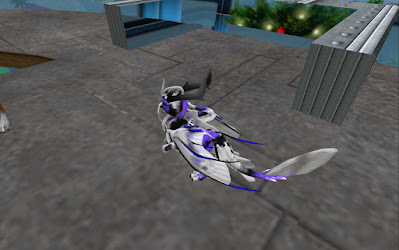 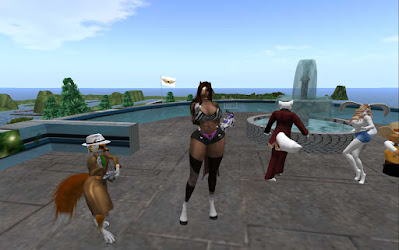 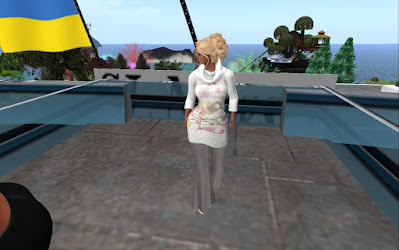 Roving reporter Gemma Cleanslate arrived after a little while. 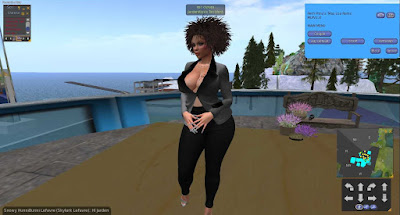 So did Jarden Alexis, head of the Premier Business Center, was also there. 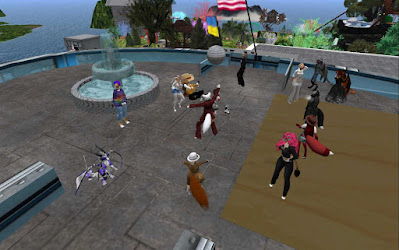 Eventually, Gemma had to put a temporary cover over the opening for the stairs so no one would drio down by accident. 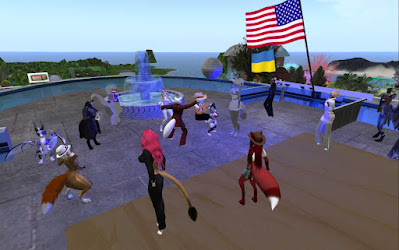 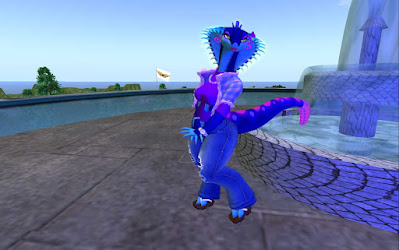 A serpentine girl who commented she was nicknamed "The neon noodle." 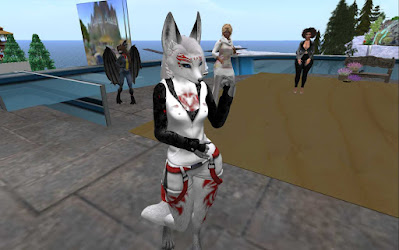 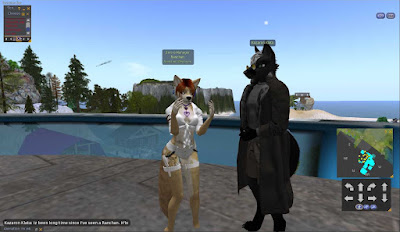 Ranchan Weidman on the left, the builder of the SL Newser office. 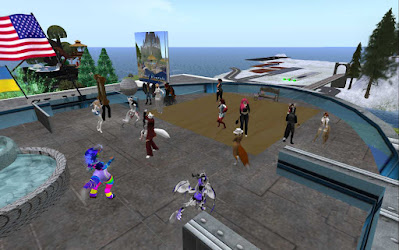 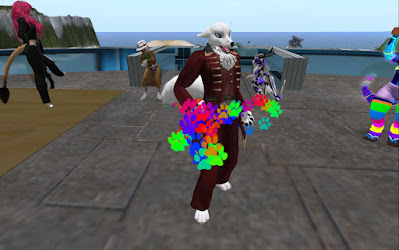 At 1 PM, DJ Grease Coakes took over the stream, dressed up in the Victorian outfit he wore at the SL19B. 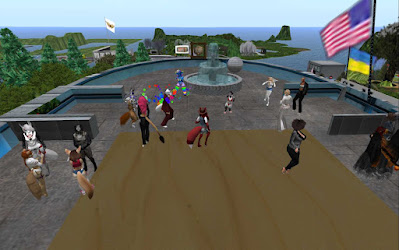 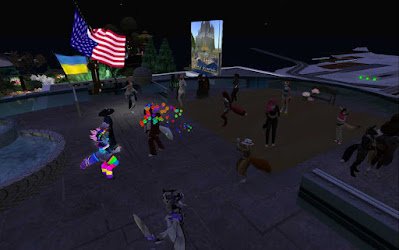 Putting the Viewer at Midnight, the nron lighting was more visible. 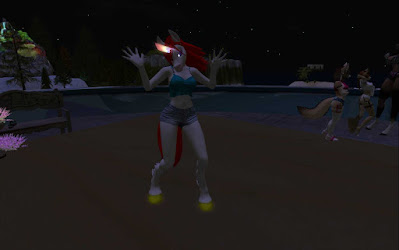 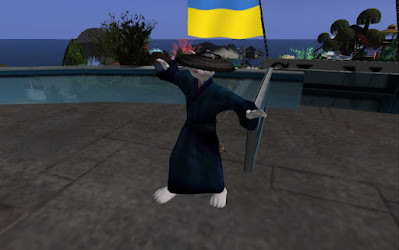 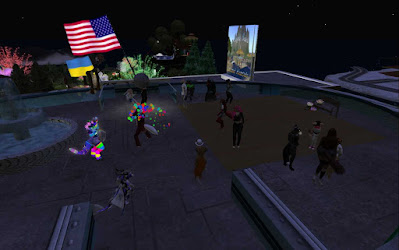 It was quite the party, and a little fun for the Newser team. For those who missed the party, don't worry too much. We're planning an anniversary bash in June.
Happy 2023
Bixyl Shuftan
Events
Posted by Bixyl Shuftan at 6:00 AM No comments: 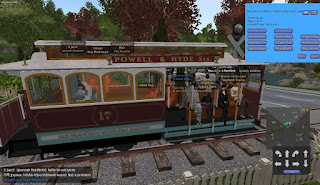 On Wednesday December 28, I noticed Abnor Mole ask a question in Bellisseria chat, "How many people can fit on a trolley?" Someone responded, "No. But you can always call over people and find out." Abnor then sent a link to a location in Chippewa Junction. I sent an alt over, and a number of residents were already over, joining Abnor and Moonstruck Mole. "Make sure you turn your AO off and sit on an empty seat." "Click on a seat, not just the train." But there was soon little to no room on the seats, "Looks like the roof is a good place to sit too."

About twenty were about to get on the trolley, including myself and the two moles. We then headed down the track, going around the "boot" of the older part of western Bellisseria. Moonstruck commented, "Abnor and I weren't just looking for excuses to ride around today, nope. Not us." Of the one guy on the roof, there were some jokes, "Sit down you will be loosing your head when we come across a tunnel." He just chuckled, "Nice time for my face to be frozen in a terrified grin ...."

Our trip took us through some scenery, "Hey, we just passed my cafe!" We went through the campground area, "The only thing missing is the cables, and the eerie electrical noise they make at times." It would also take us through some rough but picturesque terrain. Someone got knocked off, but got back on, "Omg, I saw myself in the air!!!" The guy on the roof stayed on, though, "Good thing we don't want you to loose your head." "(chuckle) Thanks ... I don't either. Expensive head (chuckle)." Eventually though, we passed under a bar, "Careful of your head! Eep!" "Marius, did you keep your head?" "Marius is dead now." But the guy smiled, "I am reborn!"

Talk about the seating arrangement continued, "Try to seat on an empty seat." "Trying to sit but it says nothing available. Oh wait, I'm on it now." "I tried a seat and ended up on the levers. The train decides!" "Yes sitting backwards like I'm going to fall off. *evily laughs*" The guy on the roof commented, "It does decide as it keeps putting me up here." "... f sat properly we should get a menu upon seating and be able to change place if there is at least one left free." "I think we're out of seats... it's just attaching us to door frames and stuff." "I think the trolley needs seating poses that have us hanging from the poles like in real-life (grin)."

Still, the trip went on, "This tram is made especially for Bellisseria, so its perfect for here... and for riding with friends (smile)." "It is a good looking trolley." "Yes, I love the look." "The rail system is one of the most exciting things happening these days.  It's so cool to witness it being worked on." Moonstruck would say, "They do have a bunch of diff ones."
Then the trail seemed to be getting off the tracks. "Derailing!" "Trolley!! NO!! You can do it!! We believe in you!" "Calls Squeaky.... we need help!!" Then the car got back on the rails, "Oh .... ok again *phew*" "Poor trolley," Moonstruck commented, "didnt want to go home yet." "Think it feels abused" someone asked. Moonstruck didn't think so, "It likes you all I think." "Gonna need loads of maint soon, haha." Abnor admitted, "The script errors are getting very graphic."

Eventually, the trip ended back where it had started, Chippewa Junction. "Home again, Home again jiggity jig," Moonstruck mused. We got off, thanked Abnor for the ride, "Thanks for the fun ride." "Thank you too for inviting us." "Thanks for the ride!... and the fun!!" "That was so fun! Thank you for the invitation!" " Have a wonderful day, everyone! Thanks for the fun times." Abnor thanked us back, "Thank you everyone for the successful pile on test." "Thank you all so much for taking a ride with us!" Moonstruck told everyone, then mused, "Make sure to pick Abnors pocket before you go!"
It was a fun little trolley ride with two of the Linden Moles.
Bixyl Shuftan
Posted by Bixyl Shuftan at 6:00 AM No comments: