Wednesday April 29 had at the Fantasy Faire an event that's become a yearly favorite: The Linden and Mole "Jail and Bail." This time, there were two sims involved: Ambigula and Melusina.

Patch and the Lindens locked up on an island, Moles in the pirate galley’s brig. Who gets the DJ? Only YOU can decide! We’ll be setting up a family feud as the donation kiosks decide exactly whose decks DJ David Abbot will be using! It’s another Fantasy Faire Jail’n’Bail to benefit the American Cancer Society’s Relay for Life, with our very own beloved Lindens and Moles as the very special guest stars! 1-3pm SLT on Melusina’s Depths for the Lindens and on Ambigula for the Moles. 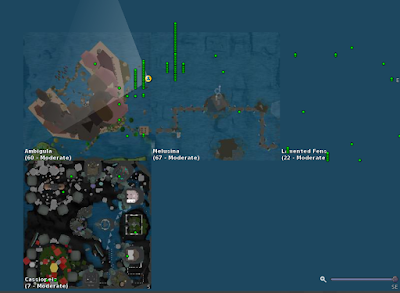 Melusina was packed with 67 residents at one point, so all I could do was occasionally peek over from Ambigula, where a number of moles were behind bars. Abnor Mole, in a dinosaur avie, occasionally had his head peaking out from between the bars. Maximus Mole looked like he was straightjacketed and secured like Hannibal Lectur. Chronos Mole was on a horse, to which there were a few horse manure jokes, "a bag of complimentary horse poop for your Linden Home garden! "The cage wasn't really locked shut, but stuffed with doors. 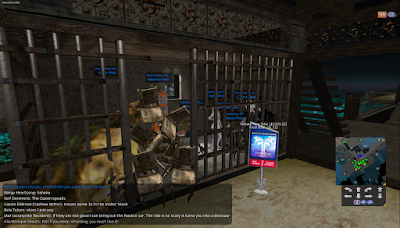 I couldn't see Patch Linden, but I could hear him, "Ahhhhhhhh you can't keep me here!" Of the Moles, they had their share of supporters, "I love my Log home, shoutout to Moles and Lindens who worked hard on them!" "Supports the freedom of the moles! the eating of Bacon and the clicking of the donation kisok!" "WE WUV DA MOLES!"

It was soon brought up one of the Moles was without his shirt, which got comments from the women, Madonna Daehlie saying, "You shouldn't have shown up shirtless, Derrick. Now Elayne will NEVER let you free!" Another retorted, "Let's bring David back and get hot Linden men shirtless!!" "Wait, they have hot shirtless Linden men? O.O" 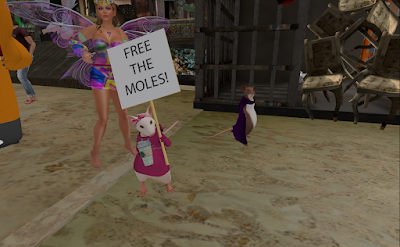 As time went on, one woman was holding a sign, "Moles and Lindens on a skewer! Judgement has come!" A more supportive mouse had a simpler, "Free the Moles!" 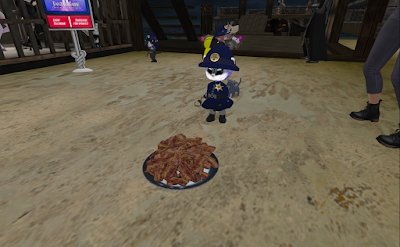 Someone would hand them a plate of bacon. Someone joked, "I think I've got some of Abnor's potato salad left over from the Mole Appreciation Day if anyone doesn't want bacon." Abnor apparently didn't see it, or it was quickly gone, "FREE ME!! I WANT TO GO EAT.... I mean... BUILD MORE HOUSES!" 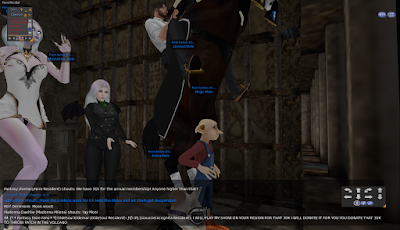 It was observed that the Moles' kiosks had a slight lead over the Linden ones most of the event, "You heard Elayne. She thinks she can beat us! HAH! Keep feeding the kiosks, Moles and Ambigula!" Then it was offered to jail Magic Mole if another 40,000L were raised. It soon was, and the diminutive Mole was tossed in the slammer, "We got Magic in a can!"

Other Moles made offers for large donations, Notta Mole saying, "10k L Gets you and 2 friends a guided tour with the Awesome Abnor Mole around Bellisseria for an hour! (I promise you, he's a fantastic driver!)" Abnor shouted, "How much would someone offer to NAME A REGION in Belli? (Subject to approval)" 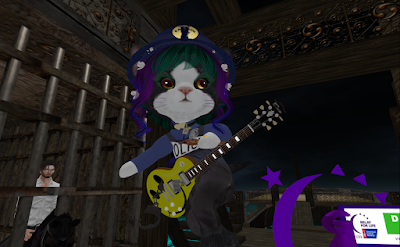 There were a couple people dancing away on critters, including the old dancing cow from early Second Life, "I feel like im a young resi again.....dancing cow 4 eva" One of the "Pawlice" was dancing away with a rock n roll guitar.

There were a couple people thinking of Uccello Poultry whom it was announced the day before had died, OldeSoul Eldemar shouting, "LET'S DO THIS FOR UCCI !" Patch Linden shouted as well, "DO IT FOR UCCI!"

At 6PM, the Moles were released, and their side of the event had raised over 300,000L in their two kiosks. It was quite a fundraiser.  But this wasn't the only Jail and Bail scheduled. Thursday April 30 promised to have Jessical Lyon of Team Firestorm.

The Bellisseria Anniversary Rock and Sail 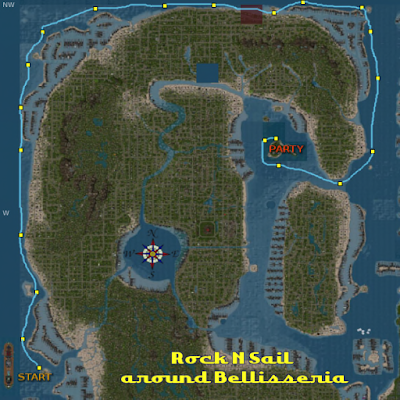 Friday I had one of the longest boat rides of my life! Actually I started off on my speed boat ready to complete the journey  in the Parade  of boats for the Rock and Sail around the continent of Bellisseria. This was part of the huge celebration of  the 1 year anniversary of the new continent. 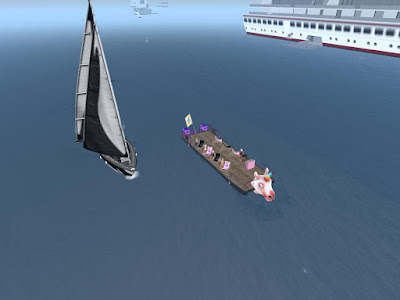 However my boat got stuck and just would not move so I quickly got a teleport to the party boat of Jon Ree. 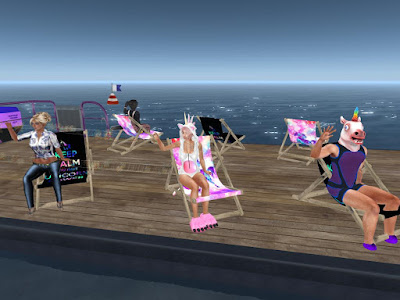 It was just great! The crowd on board was ready for the long trip and the music so enjoyable.We started off in the midst of many vessels maneuvering the waters headed north off the west coast. For a long time it went on well clipping along at a good pace waving to those on shore or other boats as we passed. 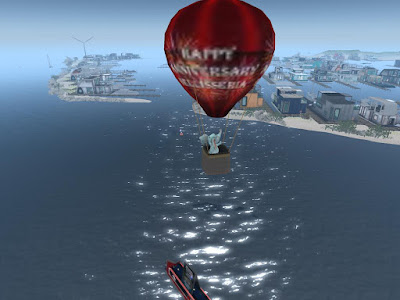 There were hot air balloons above watching the parade and moving along with it in the air. Jon steered the boat well to avoid some of the reckless motor boats and we passed through many regions well. 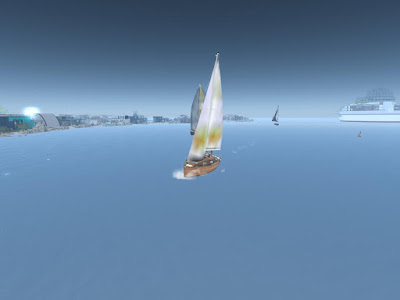 Jon is familiar with the continent since he makes notecards filled with rezz areas for cars, boats, horses and many other points of interest every few weeks. I was surprised when several times he announced,”I don’t know where I am.” 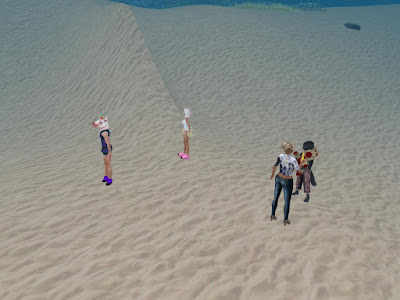 We moved along well passing many smaller boats until suddenly we found ourselves under water with no boat looking at each other. Jon recovered and went off to get a  new boat in the water at the closest point and we made it back on board. At this point beer and whiskey was passed around and I think Jon had a bit too much because back down in the waters we went! This only added to the fun and we got sorted out again and moved on to the Bellisseria Fairgrounds. 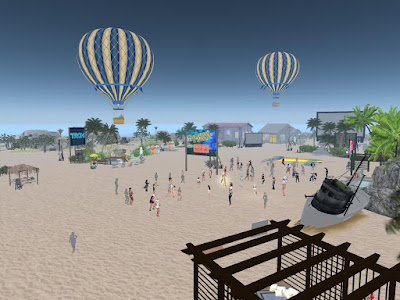 Here at the Fairgrounds all the survivors of the ordeal were celebrating to the music of Doc Rast (rasterscan Resident) The region was so full that another site was set up for those wishing to party. This is just the beginning of the Anniversary celebration which will go on all weekend. I may join in the Parade of boats again tomorrow (Saturday) at noon  if I recover! If not I will be at another party at the fairgrounds for sure.

The "Bid Me Bald Game On, Cancer Team Challenge" 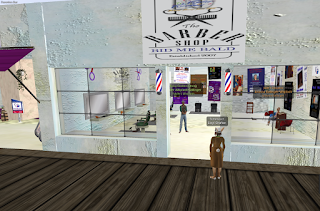 The Relay Rockers are known for their "Bid Me Bald" events, which have inspired numerous spinoffs over time. But this year, instead of individual Rockers putting their curly locks on the line, they've made it into a competition.  From April 8 until today April 19, they and several other teams were in a friendly competition to raise Linden dollars, pledging that the one in last place would give up their hair until the Relay Weekend.

I had a chat with Trader Whiplash-Ballinger (Trader1 Whiplash) of the Rockers just as the event was starting. "They (the kiosks) will be here for the next 10 days," Trader explained. When I asked him where the idea for this event came from, "We have always done challenges, couples going head to head, different RFL people. We retired the regular 'bid me bald' events partially last season and completely this season. But we wanted something to continue its legacy. After the success of 'Bid The Lindens Bald,' we thought perhaps the same format would work with teams. We also thought it would give some of the teams a boost in fundraising." 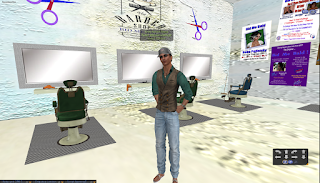 Several teams responded to the Rockers' challenge, "We have eight teams plus the Rockers of course, and the RFL Season Leads:  Adam, Ari, Gem, and reportedly Sting." When asked, Trader stated the Leads count as a team, "We've been trying to get Sting's hair for years!" So what were the other teams saying? "I can't speak for Sting, but the other teams all think its an awesome event.  Those I have spoken with are all looking forward to tomorrow. Let's face it, the first part of fundraising is FUN, and this is a fun event for everyone." 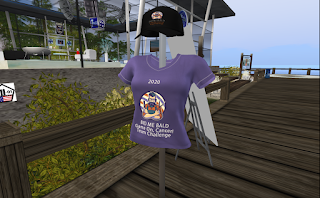 Seeing a t-shirt and hat nearby, I brought that up with Trader, who commented, "Hey you weren't there if you don't have the T-shirt! And if you're gonna be bald you need to protect (your head), so we have hats too. And every team gets a can of Turtle Wax SPF 50! Tazzie Tuque made the shirts again this year.  And they are only L$150 in an RFL vendor."

Trader has been busy lately, "These days and those too!  (laughter)  It never stops.   CRFB Top DJ is underway too.  But I will say overall the Rockers are taking it a little slow this year.  Most of us have been Relaying for a very long time.  Losing Ertina took some wind out of our sails, I am not 100% and a few others have had personal issues in the other world, so its not going to be a 'Rockers' year. None the less we will do what ever we can to assure the season is a success with Relay." 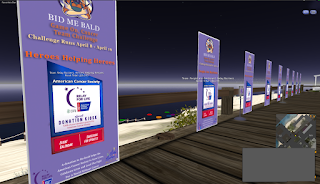 As of Friday, April 17, the totals of the teams were as follows:

The kiosks are open until 4PM today, Sunday April 19, when the final totals are calculated, and the team in last place owning up to their promise for haircuts.