One of the many social groups of Second Life is the Sunweavers headed by Rita Mariner is still going strong as there's always something going on in her network of sims. 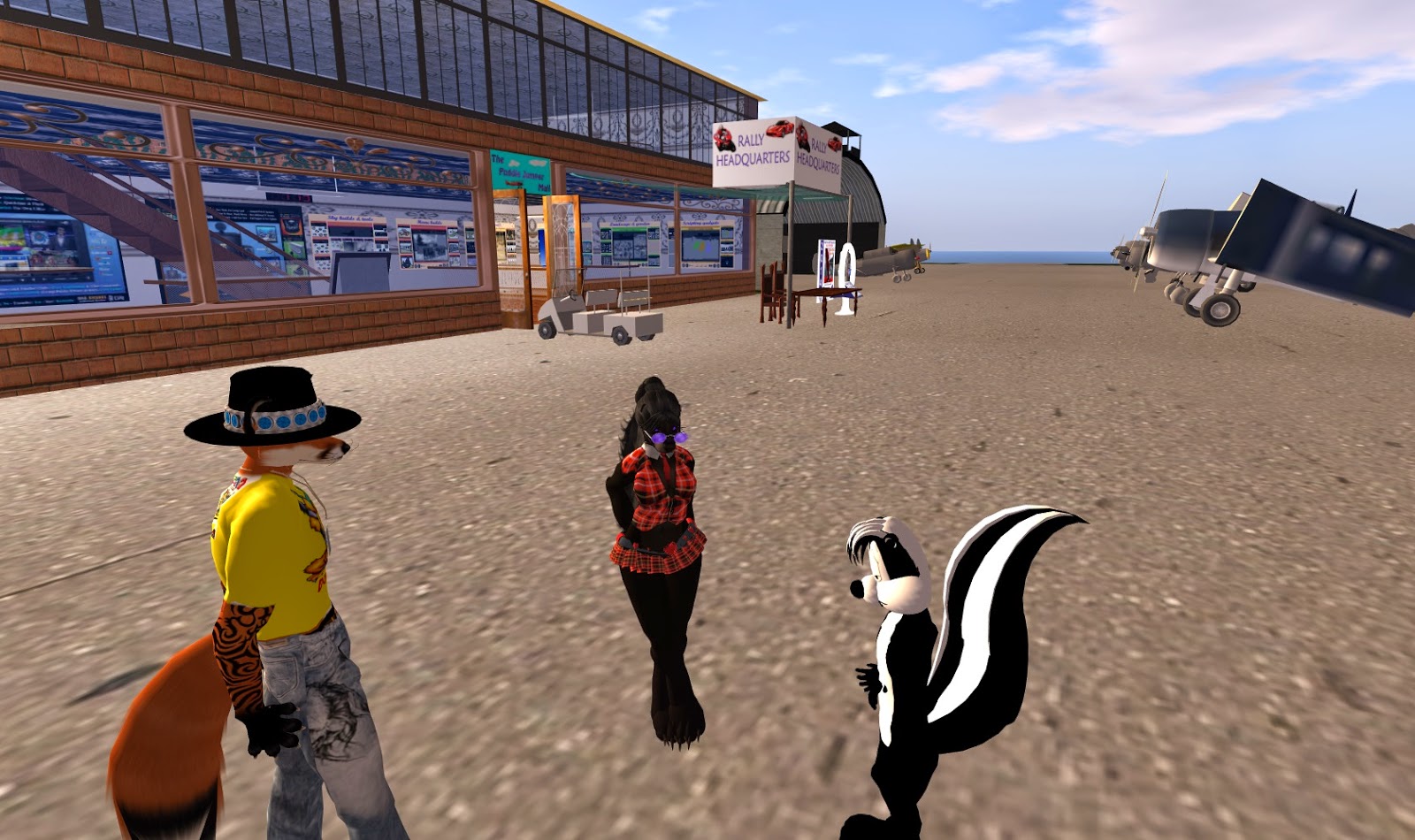 On July 12th Rita told me there was going to be a RFL event at Farshore Field, named after everyone's favorite goat Cynthia Farshore. The general theme was miltary with a plane race and a dunk tank you try to hit with a cannon. But the dunk tank and plane races weren't free. One had to pay for shots at the dunk tank or lindens to race in the clouds with one of the planes. But the Lindens you pay go directly to the RFL team the Sunbeamers. Rita is well known as a bunny rabbit, but for RFL she was bid to be a male skunk. I saw her in a "Pepe LePew" avatar from Looney Tunes cartoons.

The event took place 8am-5pm SLT Saturday at  Pacific Waters 140/74/32 . The first class consisted of motorcycles from 8 AM to 11 AM. The second class would be automobiles 11 AM -2 PM SLT. It made me think to look around for the car I purchased for charity a few years ago. The third class was "whatsits," which was driving whatever one wished. 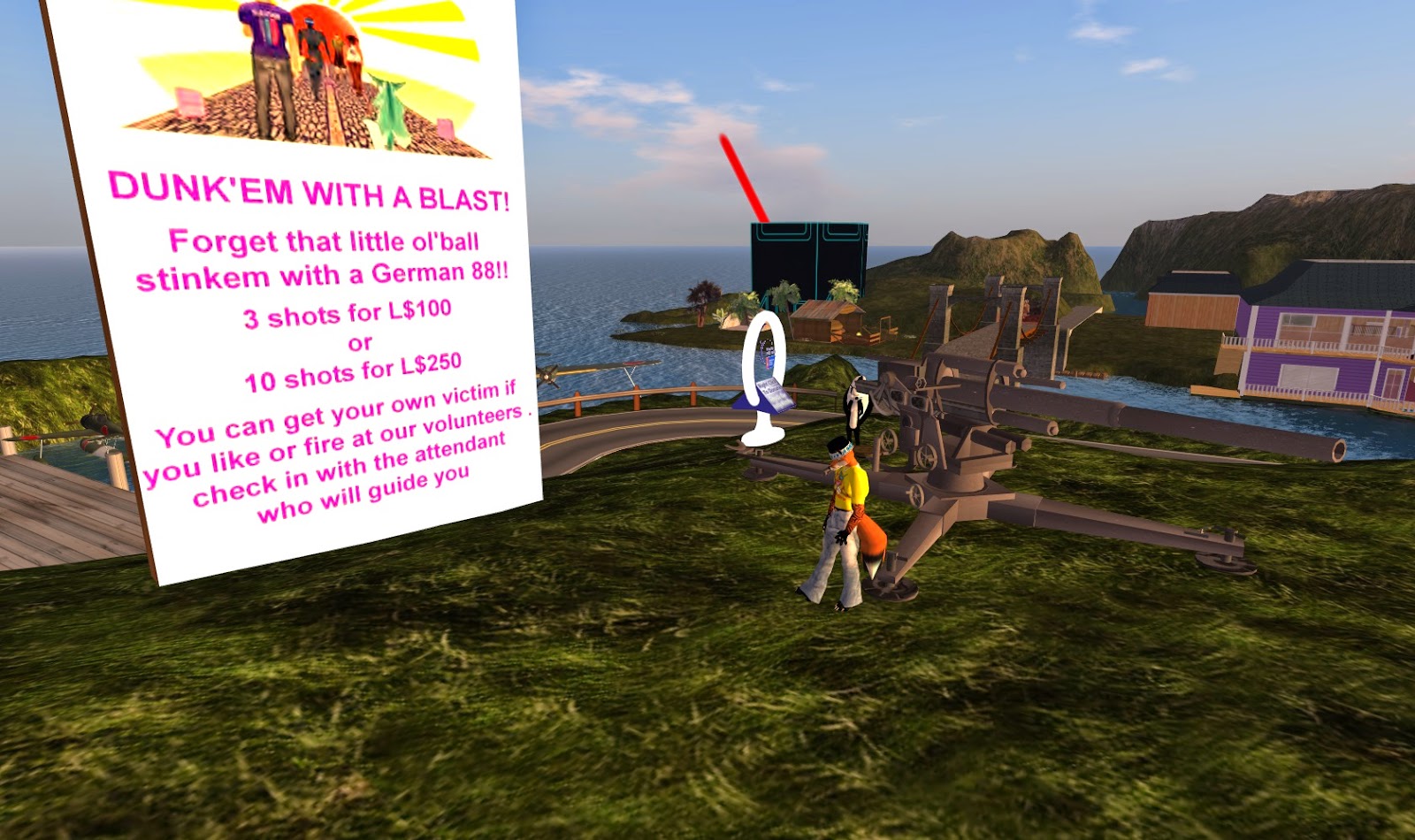 The entry fee was 500L for the first five laps and only the best time counted. If someone wanted a second try, 200L for another five laps.

There was also a dunk tank with an 88mm cannon instead of tennis balls. One could take 3 shots for 100L or 10 shots for 250L at that nasty furry within the Sunweavers you wanted to get back at for putting worms in your bed, or some such. There was also a balloon ride from Skylark Lefavre for a donation to RFL to see the mad chaos of the car race.

Another neat feature I noticed on Rita's Sim network was the monorail I saw going through her lands. Thinking of the first Linden bear I found which was Simon Linden's where he didn't directly hand me the bear I had to go on a mini hint quest on his land to find it. One of the things he had was a train which led you to the next clue. As the legend goes any time you meet a Linden ask him or her for their bear and you get one. 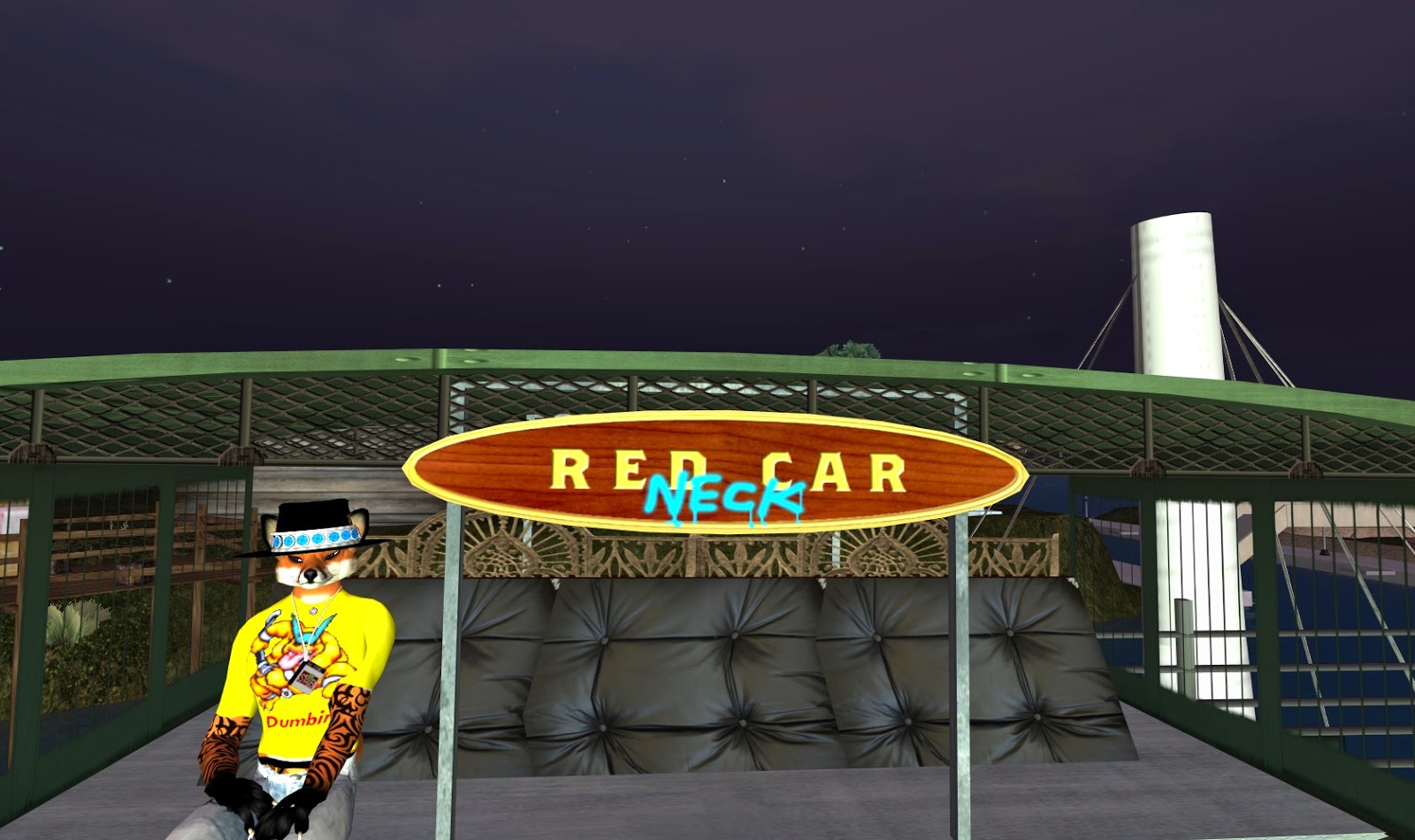 As I write this article I'm riding around on Rita's monorail seeing the various sights and a mechanical humm. Anytime the railcar stops you hear a tone to announce the rail stopped. You also see in green bold letters what stop you're at. For example, "KFStationMarker: SUNNY BEACH STATION" showed up as one of the stops.

In regards to the monorail I had this to say and Rita agreed with me.

Grease Coakes: "You know life whether it's Second or first, life tends to go at a fast pace. It's nice to slow things down and take a breather on a monorail or blowing up a dunk tank."

The monorail, which took two weeks for Rita to build, is well done. One of the stops happened to be the SL Newser Building. In fact one of the end points happened to be "KFStationMarker: PACIFIC WATERS STATION," Where Cynthia held her RFL events today.

The other end of the rail happened to be Holmes station. After the monorail ride, I went to get food in real-life, and came back in time for the car race.

I had fun racing against Kiwi and Skylark and Rita Mariner. I found out the trick was to slow down when my car hit the turns. If I drove to fast I ended up in the water. I went splash a few times which slowed me down but I just jumped out and re-rezzed my car. 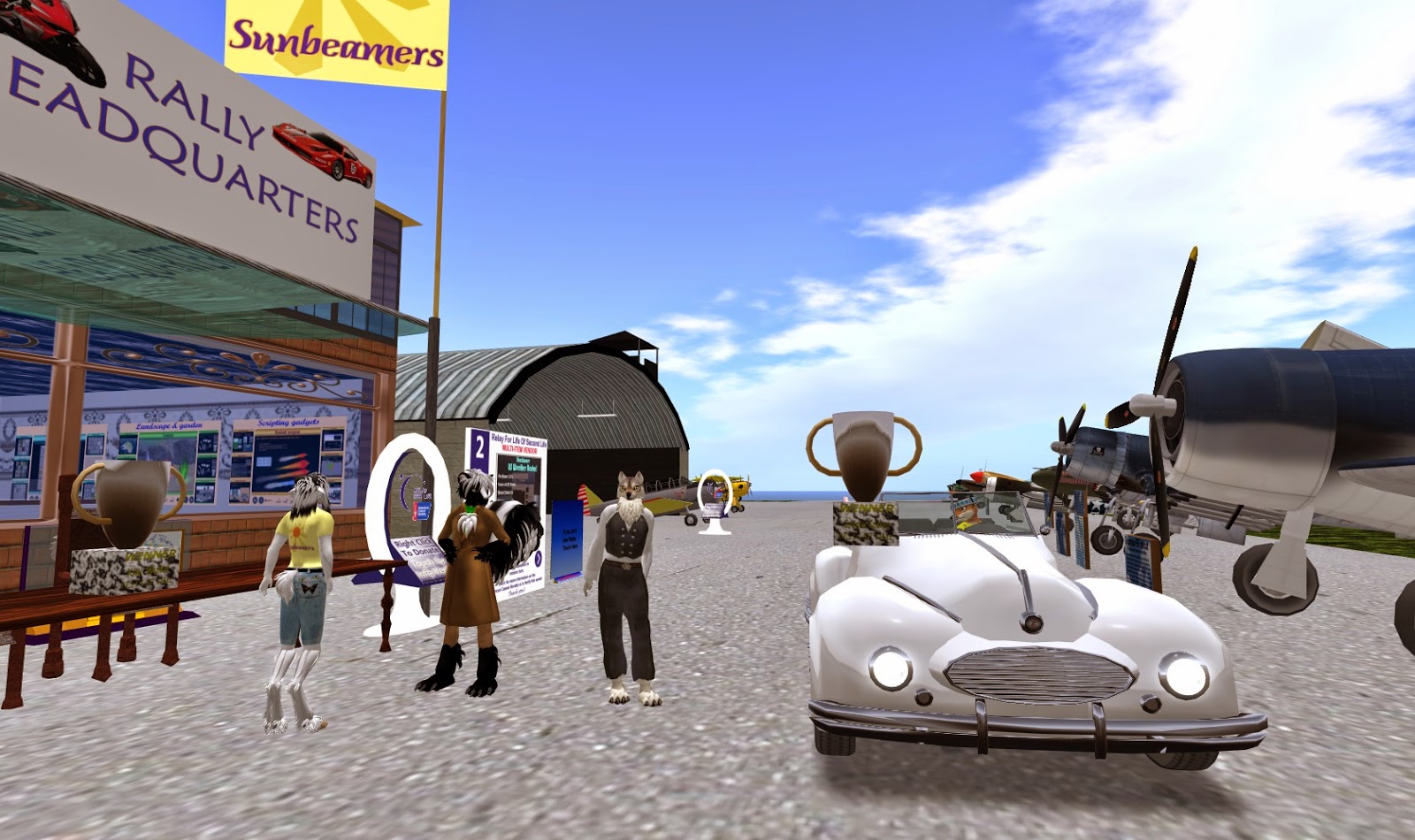 A great time was had by all as a pony tried to run me over with her and people were dunked by cannons. Rita herself drove a batmobile and lost a wheel. Give credit to the furry Sunbeamers as they raised over 215K Linden for the fight against cancer.

Not only was the day fun, we came a step closer to defeating cancer, and everyone wins.

*Editor's Note*: Grease did better with the sports car than I did with my "Hercules," my top speed being about 55 seconds. Attendance was somewhat small due to other Relay events that day, such as the Breedables Fair. Even the season's longest cross-sim Giant Snail Race had a smaller than normal turnout of it's kind than normal. And some were out doing real life work, were on summer vacation, or otherwise unable to show up. But enough people and donations came in, especially one generous one from Raschid Marenwolf, to put the Sunbeamers into Gold Rank. That evening, Skylark LeFavre's "Bid Me" event came due, and she was "Bid Mousie" until after the Relay Weekend.