On August 16, the five month long Relay for Life Fundraising season officially came to a close with the "Wrap-Up." The event this year was a little different as it took place in the Rose Theater, the members of the Comittee up on stage and others in the audience seating. T1 Radio provided stream coverage for those whom couldn't be at the sim.

"How beautiful is this? I love the Rose Theatre," Random Darrow spoke of the location, "We're gonna jump right into it and Thank you Lisa Valentino of Angel Manor to host our wrap up ceremony at this beautiful Rose Theater!   Lisa has been a huge supporter of RFL and extremely generous for providing us with with this magnificent venue."Stingray Raymaker announced that the total ammount of cash raised for this year's Relay Season had reached $275,000 US Dollars.

It was announced PrettyKitty Gumbo would be stepping down from the Committee, though would continue to be a Relay volunteer for her team. Lomgren Smalls would be taking Dwen Dooley's place as the Tech Lead, "don't worry, the kiosk size will not change." Nikki Mathieson will be their Mega Events Director.

Leala Spire and Ariel Goldrozen, whom were wearing pink at the ceremony, would be the lead and co-lead in planning the "Making Strides Against Breast Cancer" event in October.

Several teams had risen in level since the Relay Weekend. Team DRMC, Little Yoshiwara, House Of Fallen Angels had reached Bronze. LA Designs and The Future is Now had reached Silver. Dreamin' in Purple, Giant Snail Relay, Soul Sensations, Walking Tall For A Cure, Alpha Sigma Omega Sorority, and the Seventh Legion MC had reached Gold. The Circle of Life had moved up to Platinum. The Second Life Coast Guard moved up to Saphire. Sail for Life moved up to Emerald. Harmony of Hope reached Ruby level.

The winner of the "Swag Bag" award was TS Darrow.

The winner of the Best Man and Maid of Honor Award was Bella Zeplin. "Events are hard for her to attend but she supports the team as strongly as she can especially on Relay weekend and has for years. This year was a special one.  Not only did she arrange her schedule to be able to be with us all weekend but ... Bella would cheer everyone that passed by all Relay weekend and took the extra step of IMing many of them.  If they responded to her she took the time to not only get to make a new friend of each but that lap and any other laps she saw them she would run out on to the track and offer hugs to each one.  She would express her appreciation and admiration to the survivors and caregivers and would thank them for all they do.  She wanted to make sure they all felt very loved and honored."

Nayomi Naidoo, the "In All Of Relay's Corner" award.

Rheata Resident, or Rhea, the "Rhea Of Light" award. 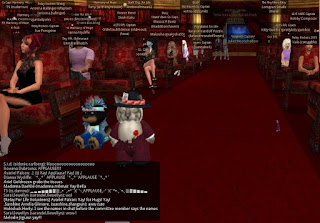 "At the closing of Relay 2015, during the last victory lap, Nuala was given wearable fireworks which she put on  while she walked the track.  These fireworks are very vibrant, many in number, and explode high in the air.  After about 30 minutes of walking through 6 or 7 sims, stopping to talk to people, crashing 5 or 6 times, and being up for 30 hours, Nuala decided she had enough of these fireworks going off all over the sims and causing her to lag more than usual.   So, apparently, she asked in committee chat,  if whomever put out the fireworks in all the sims could turn them off.  To which she was told ..no one put out any fireworks, is anyone near you that has on the wearable ones?   The light bulb went off .... it was Nuala herself who still had on the wearable firework... and she said.... 'no wonder I kept seeing fireworks every where I went!' "

For Top Team Convio, or website, fundraising, the team that raised the most via the Convio

website, third place went to Team Shadow ($2135), second place to the Relay Rockers ($2823), and first place to Harmony of Hope ($3815) (at the ceremony, they accidentally listed Sail for Life as third place). 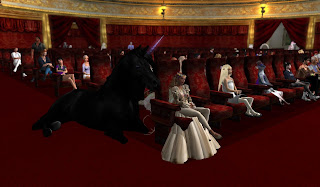 The Gordy Klatt Award, named for the founder of the Relay for Life, went to Team Strange Journeys, "This  team continued all season long on a mission to push our guidelines with creative thinking and heartfelt passion for Relay."

For the Spirit of Relay Awards, the team award went to the Second Life Cheerleading Squard, "They entered this season with a smile and finished it off with a huge round of cheers - this same attitude is how they approach strangers on and off the track offering friendship and support where it is needed most. They attend many of the Relay events, and their personal stories are inspiration to all." The individual award went to Mary Teodosio, "Her creativity and passion for Relay was also displayed in her making two homemade quilts to be auctioned off!  Mary attended many of your team events as well as included you in hers."

This years Keeper of the Torch: Melodie Jigsaw

Except for the Clown and Best Man/Maid of Honor Awards, Committee Members are not elgible for Awards

The theme for next year's Relay Season was announced: Once Upon a Cure. 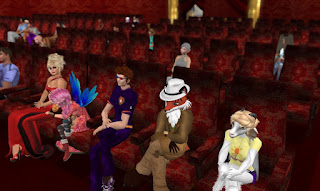 Of the theme, Stingray told the crowd, "This theme can be special because, it isn’t saying that the cure is a fairy tale or that a cancer patient’s journey isn’t ‘real.’ When we look at this theme, what makes me excited comes from the question: Why do we tell stories?...not just fairy tales...but all types of stories? Remember that great stories, even fairy tales, last the test of time because they’re meaningful and they provide value. Fairy tales function to address those big life questions, to help us to face life’s struggles, to help us understand morality and responsibility. But more than that, this theme of Once Upon A Cure gives us the chance to highlight our own stories. What will be the story of Relay For Life of Second Life in 2016? What will be YOUR chapter in that story? We love hearing the stories of our cancer survivors, and we wipe away tears when we read or listen to the Why I Relay/Why Do You Relay segments. Next year - I’m looking forward to Once Upon A Cure because I can’t wait to tell, read, watch, listen, and learn from all of your stories!"

Random concluded, "You are ALL the singular pieces that unite with so much passion, dedication & creativity to form this grand MOSAIC we call RFL in SL and I am honored to be amongst you. The Future is Now , but I want to personally Thank You for your commitment to a bigger & better tomorrow and I look forward to working with you all again in 2016!" And with her words, the ceremony ended to the song "We are family" taking the radio stream.


Cuddly Waffle took a transcript of the event, which was used in writing this article (and can be read in it's entirety after it).

And so, the 2015 Relay for Life Season officially came to a close, but this does not mean an end to fundraising for the American Cancer Society and events related to the Relay. In a few days will be the Alliez Mysterio Award event. And there will be events such as the "Making Strides Against Breast Cancer" event in October. And last but not least, the Relay for Life in InWorldz fundraising season has started, which will end in October.