Ringing in the New Year In Second Life

Unlike last year, there was no official Second Life New Years event. So it was up to people and places to hold events of their own. And there certainly was no shortage of parties, and other happenings across the grid. 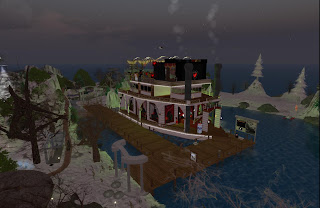 At 4PM SL time, the Queen of Hearts at the Mystery sim held their New Years Eve party. With some of the staff in Europe, it was already 2011. DJ Cameron played for those on the dance floor. At 5PM, the music stream was taken byDJ Bloodrose, also known as the "Evil DJ" due to his style of laughter and being noted for Mystery events such as Evil Christmas, "DJ BLOODRODR is taking over our NEW YEAR Celebrations! Come on down and join us! ... DJ BLOODROSE! sorry folks it's late here !" The slight misspelling had no effect on the good cheer of the revellers. For the romance-themed sim, it was a good beginning for the new year. 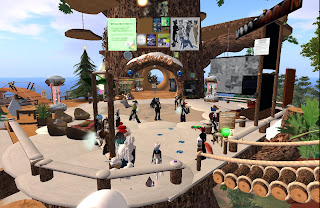 Also at 6PM SL time, Cutlass began it's New Years party. Club owner Jenni Greenfield had planned to DJ for the event, but real life intervened, and sent out a notice for a replacement to fill in. Fortunately someone did, Alexandra "Lexi" Tymets. The "nezumi" mousegirl played a selection of tunes for the dancers. Sim owner Rita Mariner livened things up with a snow machine, with flakes coming down on the partiers.

At the Big Tree at Luskwood, the denizens were having their own celebration. Founder Michi Lumin had taken the radio stream and was playing some gentle music. For the season, the tree had been given a new look, with snow on the deck and letters, the 7Seas pond frozen over, etc. Compared to Halloween and their avatar release parties, the gathering was smaller, about two dozen. 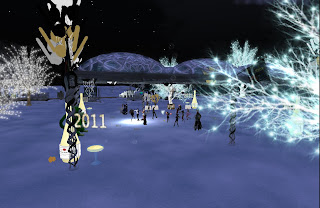 Also having a New Years bash, some old friends of the Second Life Newser staff: the Skybeam community. I read the party was scheduled for 8PM SL time, but people had been gathering for at least a couple hours earlier at the spot in northwest Skybeam Muse. With DJ Dakota Christensen spinning the music, the residents and friends partied it up, led by the estate owner Charlene Trudeau.

New Years was just one of a number of winter events Skybeam has had recently. They held a Winter Festival, of which days earlier the ice sculpture event was held where the party now was. The contest was a three-way tie, with 2500 Lindens given to each of the winners, with a commemorative trophy.

Even though their New Year was hours earlier, the Aussie Club "The Pocket" had a New Years' Party, starting at 8 PM Second Life time, led by club owner Chestnut Rau. At 6 PM SL time, one place held not a party, but a dogfight. The new modern combat sim of Gungnir hosted a "free-for-all" aireal combat match. 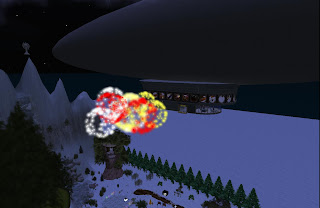 Finally, one club had its Grand Reopening on New Years Eve: Club Little Dove at Southern Colorado. Owned by Nydia Tungsten, she personally DJed for the partiers as the music and dance began at 8PM SL time. And what a party it was. The dance floor in the zeppelin's gondola was packed, someone counted 43 avatars at one point. With a 5000 Linden prize up for the best dressed, the contest board had five pages of entries. Every hour starting with 9 SL time, the new year was announced for each of the US time zones. The party went on to Midnight SL time, and probably for some time afterward.

Sim owner Daaneth Kivioq, noted for his work in the Relay for Life, made a little fun about the party the next day, "It only took me three hours today to clean up the confetti, empty bottles, and drunk furries over at the Little Dove this morning." But a great time had been had by all.

These were just a few of the events that took place across the Grid on New Years night. It was a great close to 2010, and a great opening for 2011.