“Bah Humbug” - Second Life Parties for the Scrooge in Us

Christmas can be fun, but it can also be a pain. The shopping, the crowds, the parking, the driving in cold temperatures, the forgetting about the cultural and religious orgins, the phoniness of some people, etc. It’s enough to make one scream “Bah Humbug!” So to have fun at the expense of the hassle side of the holidays, a couple clubs in Second Life held events poking fun at it. 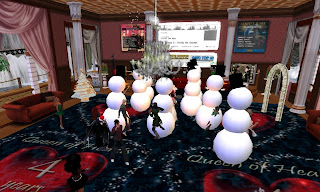 On Saturday December 25th Christmas Day, the Queen of Hearts riverboat club in Mystery held an “Evil Christmas” party at Noon, “The Queen of Hearts is both pleased and proud to present our very own DJ Bloodrose Writer! He will be spinning romance humor and traditional songs of Christmas and party. He calls it ‘Evil Christmas,” but he will play all hits of the season. Celebrating both the Scrooge/Grinch of Christmas and the Santa/Angels of the holiday!” Instead of the usual male and female contests, there prizes were for the best Scrooge/Grinch look, and the best Christmas Spirit, a one thousand Linden prize for each.

And what a party it was, DJ Bloodrose opening things up with his trademark evil laugh heard across the sim. Inside the Queen, revelers of both stripes came to the club. Some dressed in festive colors, red, white, green, or some combination. DJ Blodrose came in black of course, as did a number of others. One girl brought with her a Grinch doll. Another came in a vampire bat avatar wearing a Santa hat, “sometimes Christmas can be such a pain in the neck.” And one guy came by as a vagrant with a bottle, drinking from it (hic). 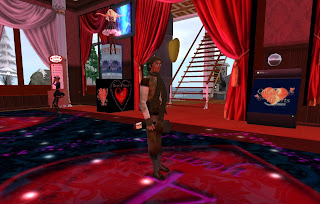 DJ Bloodrose played a number of songs, from “All I Want For Christmas is My Two Front Teeth,” to parodies such as “The Twelve Pains of Christmas” and “The Night Santa Went Crazy” and others. But he also accepted songs from the “fluffies” as he called those sticking with the sunny side of the holidays. A couple times Bloodrose would rez some snowmen, egging people to melt them with whatever they had.

The party went on for two hours. At the end, the “Best Grinch” was declared to be Arthas Darkfury. The “Best in Christmas Spirit” prize was split between Lane Weiser, and Angel4u Crazyboi.

Mystery was not alone in thinking there was something a bit saccharine sweet about the holidays. Nydia Tungsten decided to have her own bit of fun at it’s expense with the “Anti-Christmas Party” at Club Zero, “Yes, now is the time of year when we have had it up to *here* with all those sugary sweet TV specials and all those stores trying to get us to buy what ever piece of cr*p they had too many of, etc..etc... So we have the answer: the most irreverent, filthiest, and funniest Christmas songs ever made. We have $1000L's on each board. This all starts at 2 PM SL time. Your DJ will be yours truly. Hope to see you soon.” 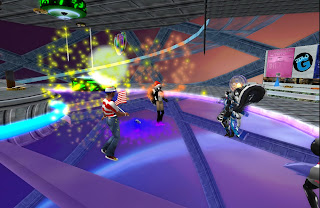 The party wasn’t announced ahead of time, people given only a few hours notice. Still, a number came by to have a little fun. Some of the crowd switched to skunk avatars for the party, “Merry Stinkin’ Christmas.” One donned an American flag shirt, and lit a sparkler, feeling more in a 4rth of July mood, or perhaps wanted to get to a holiday as far away from Christmas as you could get.

Second Life had plenty of events for those filled with Christmas Spirit, but it didn’t forget those who felt like giving the phony side the raspberries.