The 2011 Relay for Life Kickoff 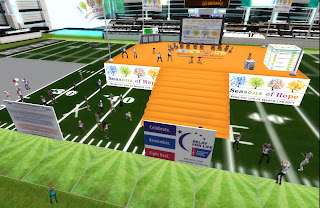 On Saturday March 12, 2011, Relay for Life in Second Life had it’s official start in Second Life with it’s Kickoff Ceremony. For some, the action began a little early. Among the groups whom celebrated a little early were the Passionate Redheads. After a meeting at 5 PM Friday at Fimi Falls in Southern Colorado to discuss the following season, over a dozen of the group headed to the dirigible club Little Dove nearby to hold a celebration of the Relay’s opening, club owner Nydia Tungsten personally DJing. Among the avatars there, a dragon whose skin was textured the same as the logo of the Redheads. 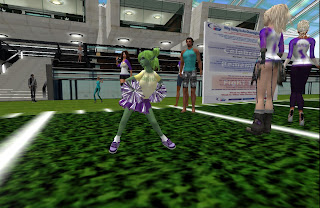 Before the Kickoff was the Tailgate Party at 10 AM at the Country Club sim. But some were skipping that sim, and heading to where the Kickoff would be, high over Casablanca Bay, where over 2000m in the air on a hugh sky platform sat a football stadium. People were showing up there a half hour before in anticipation of the place soon filling to capacity.

And indeed at ten, a large number of people were dancing away in the stadium. These avatars represented a wide range of relay groups, not to mention a wide variety of avatar types. One small cheerleader looked like a lady goblin character plucked from “World of Warcraft.” Not everyone was on the field dancing. Some were in the stands. Someone had anticipated the Tailgate being celebrated here as well and brought a grill over. Unfortunately, no one remembered to bring the burgers and hot dogs. Bu there was music, provided by DJ Aryon Dagger. Her last song was, “You’ll Never Walk Alone.” 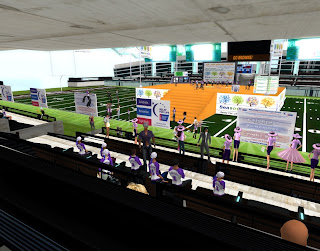 The sim was quickly filled to capacity. Unfortunately, this soon led to people crashing and not being able to port back to the stadium. Because of this, some had to listen to the Relay announcers at the Kickoff event speak via the radio stream on the Internet. Members of the Passionate Redheads met up back at Southern Colorado to listen to the speakers. Survivor Tail Walmer gave an inspirational speech which was posted on the Relay for Life in Second Life newsblog.

Following the close of the Kickoff, some groups held parties to celebrate. Among them was the one held by the JLU group, some of the superhero avs swapping their capes for Relay ones. DJ Jetta Bentham performed for the men and women in tights.

Besides SL Newser, one can go to the RFL in SL blog, and RFL Harmony for Hope, for other articles on the RFL Kickoff. Lomgren Smalls also posted a number of pictures on his Flicker account.