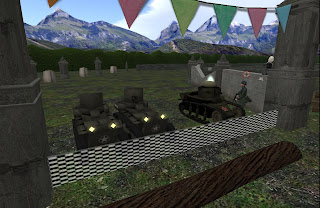 The event will consist of two lap races on our combat course, using the free Blitz! tanks provided by Joe Sparrow of Astral Tek. The races will be live fire events. Each tank will be manned by a driver and a gunner. The main goal for each driver/gunner team will be to cross the finish line first, secondarily the goal will be to eliminate the competition before they eliminate you! This will be a no holds barred event! Blocking, pushing, and other aggressive maneuvers not normally sanctioned in SL racing events will be allowed! The course itself will be perilous, with tank traps, obstacles, mines and explosive fuel drums! The track will be open for practice for the month of March, and you are welcome to play anytime, just be mindful not to reset the gate while practice races are in progress. 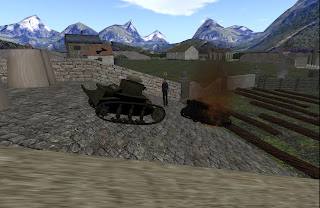 Three models of small two-man tank are available for the race for free, the T1 Cunningham, the MA-1, and the VK 31 Leichttraktor. The vehicles are a little different, the T-1 being slightly faster than the others. German teams were free to take American tanks, and vice-versa.

The first rally went well, the first race the gunners having a little trouble shooting, so the winner was the one whom went around the obstacles the fastest. The third race was the quickest. The four tanks involved began firing on one another as soon as they crossed the starting line, and in less than a minute three were smoking wrecks. AngelBlue Xeno/Kenji Feiri won by taking out the others, including some top officers. 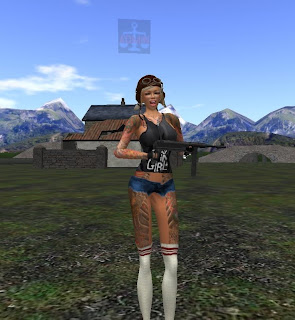 There would be a few more races, though none had a gunfire duel as intense as the third. Vickster Khun, the leader of the German Armee team and one of the administrators, took part in one race. Unfortunately, her tank was outfought in a duel. Climbing out of the smoking wreck, she grabbed a gun from her inventory and began chasing the other tank, firing all the way. But without her VICE meter, this was just funning around as the bullets harmlessly bounced off, and the tank went on to finish the race.