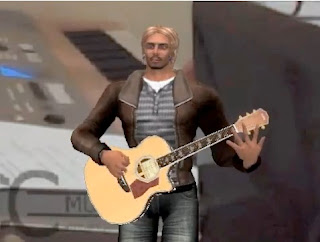 Recently, Greg Colburn (aka Greg Colossus), via a note to his group, announced his retirement from music in SL. He began performing in SL in 2006 as Greg Colossus. Frustrated that he couldn't choose his own last name, he petitioned the Lindens to have it be so. They finally agreed and Greg Colburn (his real life name) was born in SL.

Sadly, I didn't become aware of him until early 2010. I had the pleasure of meeting him in person and seeing him perform live at the Hartford Jam last May. He is a terrific guy. All of Greg's scheduled shows were cancelled as of the time of his announcement but he still planned to attend and play at the April Jam in Maryland. As of 15 April, Greg Colburn will log in "once in awhile," but will not perform. He is pursuing his budding music career in real life and has many happy things happening personally, as well. Greg will most definitely be missed and remembered as one of the many fine performers in SL. 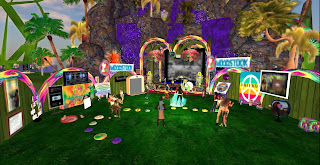 On a happier note, Pillowfish returned to SL for a mini tour of the Internet. Their return performance was at the venue Woodstock. Pillowfish is a rare treat as they are usually quite busy performing and recording in RL. They are currently in the process of recording their second album but to the delight of their fans, they decided to take a break for a spell. Pillowfish consist of Thom Martinsyde and Rowena Sideways. They are a UK-based progressive folk duo and their sound is uniquely Celtic to the ear. Their instruments include a 10-string bouzouki, viola, fiddle and guitar, joined by their melodic voices singing perfect harmonies. Keep an eye open for them over the coming month. They are well worth a listen. 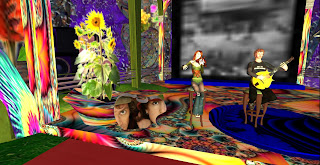 Attending the event at Woodstock, I was saddened to learn that it was one of the last shows at that venue. Others played at this farewell concert to a most loved venue. Woodstock symbolized everything 60's, hippies and, of course, Woodstock. The ambiance and decor was truly psychedelic and beautiful. I personally will miss this awesome venue.

Shellie Sands
Posted by Bixyl Shuftan at 6:00 AM