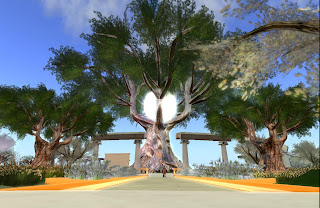 On Tuesday April 19th at 6 PM, an event for Relay for Life was held in honor of Daaneth Kivioq. Sadly, Daaneth had been stricken from a stroke. The event was partially to revitalize his team, the Passionate Redheads. But mainly it was to show support for Daan.

The event was launched by Evangaline Ling of Team Relay for Hope, though it was for the Passionate Redheads, Daaneth being a top officer, and had their fundraising kiosk up. And since it was for the Redheads, it was a “Red Hair” event. So people were asked to have their avs wear red hair. Those whom were hairless from a “Bid Me Bald” event got a reprieve for the party, as long as it was red.

The location of the event was the northeast corner of the American Cancer Society sim. People teleporting in walked from the big tree in the middle of the island toward a transparent dome. And on the DJ booth and the sides of the dome were the signs “Get Well Soon Daan.” No one got numbers of how many attended, but at least a few dozen were there. 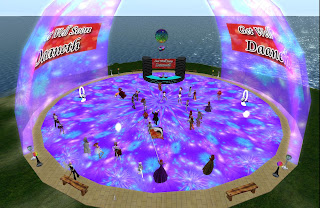 DJ Shayla provided the tunes for the first half of the event. At 7PM, DJ Dusk took over. As the music went on, people challenged one another to contribute more, “for anyone who chips in 100 Lindens, I’ll match it.” People who couldn’t make it at the start dropped by as time went on. As the end of the music approached, DJ Dusk had one last song for Daan:

And knowing that you would have wanted it this way
I do believe I'm feelin' stronger every day
Yeah, yeah, yeah 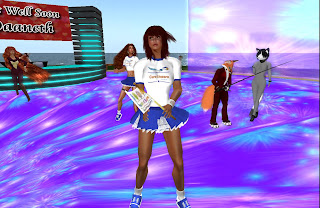 And what did Daaneth think of the event? The next day Sabine went to see him, and later told everyone on group chat, “he asked ‘Who was there?’ He cried when I told him all the names. It meant a lot to him. It meant everything. You know how he loves his friends. ... Dusk, I told him your last song. ‘ Feeling Stronger Every Day.’ I sang it to him. He loved it.” Dusk commented, “Some nights the music just seems to flow and I know just what to play. Last night was one of those nights.”

Sabine had a notecard, sent to the Redheads and presumably other RFL groups,

There are no words to thank you enough.

The beautiful “Get Well Daaneth” event held at the ACS Island on Tuesday night was a lovely tribute to a man who has freely given his heart to so many.

I am simply overwhelmed by the love that’s been showered upon our team during Daaneth’s illness. We are filled with gratitude for all of our friends who came to support us, and to all who contributed to the Redheads Kiosks in honor of Daan. Solidarity among the Relay for Life participants has long been a goal of ours; seeing this come to fruition was a beautiful way to honor one of our own.

I wish especially to thank Evangaline Ling and her Team, Relay for Hope, who spent many hours planning the Event; the Cure Chasers for the beautiful and artistic decorations and dance floor; and DJ Shayla and DJ Dusk for making the evening perfect with their special music for Daan.

It was, in all, an evening we’ll always remember. Thank you, thank you!


The team wishes Daan well, and hopes he soon recovers.