A Few Scenes at The Birthday in SL8B

In the “Important Dates” mentioned in the official SL8B blog, June 23 was listed as “The Birthday.” I heard there was going to be something going on around Noon SL time. Getting a chance to log in earlier than usual, I headed to the Cake stage. I had been exploring a couple steampunk areas with friends earlier (more on that later), so was wearing a Victorian outfit. As it turned out, I didn’t have to change. Getting to the Cake, it was one big party.

On the stage were the DJ of the hour, Xilion Iceberg, and Michael Linden. Michael was in a tiny avatar, that of a mole, dancing on stage. In the crowd were a mix of avatars in a variety of dress. News blogger Daniel Voyager was also there, though without the anthro snow leopard I’ve known him to wear lately.

Michael Linden wasn’t the only mole about. One resident, TheDoctor Footman, showed up in the same tiny av, accessorized by a mining cap and pickaxe. Seeing Michael, he went up on stage for a few moments, the two looking like they were twins. TheDoctor later made a screenshot of the scene his new profile picture.

There were a couple mishaps at the event. Just after I arrived, my avatar was suddenly knocked away several feet, and one of the sims connecting to the Cake stage vanished, taking away with it a slice of cake. At least it seemed to vanish. Michael Linden and Daniel Voyager were nowhere to be seen, but we could still read their chat. Someone suggested this was the work of griefers, but there were no signs of particles. The missing sim soon came back.

The second mishap was one of the choice of songs. The sim was a PG one, and at one point after the music change I heard a few people making a bit of commotion, “can you do this in a PG area?” I then recognized the tune as, “I Want to **** You Like an Animal.” Not the best choices of tunes in a “family friendly” place, especially with a Linden around, but all he did was cover his ears. DJ Xilion chuckled halfway through the song, then apologized, “Sorry Michael.” Someone decided to “sneak off” at that point rather than being caught on “that blog.” But most didn’t seem to mind, someone joking, “Aawwww, he’s playing for his lady.”

This wasn’t all that happened that day. I heard about Rodvik Linden dropping in earlier with a spaceship avatar. I wasn’t around to see it, though Daniel Voyager was. He wrote of Rodvik as funning around, “Mesh? I hear it is coming. The end of times is upon us! I always wondered what that red button near my desk did.” Rodvik gave no speech this year. 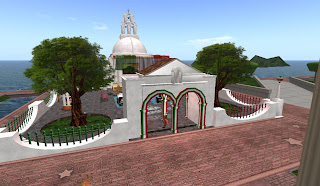 After DJ Xilion and Michael Linden had left, I decided to look around some. One place I came across was the exhibit for the Instituto Español, which Grey Lupindo attends. Wilson Voight and one of the teachers Eugenia Calderon, were there. Eugenia did most of the talking while Wilson was occupied with something. She described Grey as doing well, becoming an advanced student. This was their second appearance at a Second Life anniversary event, “Last year with we were able to let the virtual community know about our education project that we have had for the last 4 years. Also, we were able to show all the artistic and cultural activities that take place throughout the year. Besides our Spanish Language classes, we try to give a fully immersive program for our students in regards to the customs, culture, and art of Mexico and Latin American countries.” 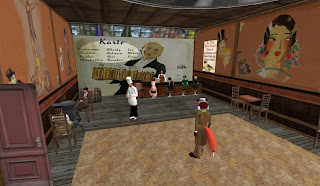 Looking around some more, one place I heard some chatter at was the 1920’s Berlin Roleplay exhibit. Stepping into a cafe, “Welkome, Herr Shuftan” they greeted me. They talked a little about the sim, as well as continuing to chat among each other about the SL8B. There was also a little music and dancing, one guy getting on stage at one point. In the middle of this, a German chef walked in sporting a sausage wrapped in a newspaper, which could be taken for free in a booth outside the cafe. Also nearby was a small movie theater. I never did stop in to see what was playing.

Well, all for now. Sorry about this post being a day late, but there’s been lots to see.