This weekend had the “Back to the 50’s Weekend” event for the Relay for LIfe. In the sim were numerous attractions, from a fair with a ferris wheel and a dunking booth to a “Sock Hop” dance club to a drive-in movie with an Elvis double-feature, and more. At various points along the streets were rezzers for scooters, which could be one of a few different colors. 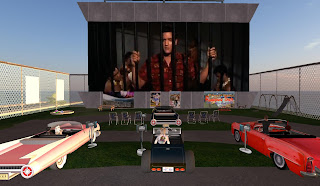 In one corner of the place was a small police station. It was run by a few police, whom kept various residents in the slammer for various reasons. An announcement was made:


Here's a great way to earn extra Linden for your teams kiosks! Have your friends and significant other, arrested and thrown into the Back to the 50's jail. If the person arrested does NOT want to go to jail, he/she will have the option at the time of arrest of paying 500L for a get out of jail free card which will be paid directly to your team's kiosk. Otherwise, the arrested has to raise 1000L bail while spending time in the Back to the 50's Jail.


The announcement was slightly inaccurate as bail could be set higher. Those interested in having someone arrested had to contact Shayla Juran or Blossum Bluebird. All bail money of course went to the Relay, and onto the American Cancer Society.

On Saturday, the Passionate Redheads got the following announcement: “Daan has been arrested for having ‘Greaser Hair!’ You can come and take photos and contribute to his bail as a birthday present. The bail money was quickly raised, and it wasn’t long before he was back out, and at the drive-in with fellow Redheads.

For Sunday, someone else had been arrested. The following announcement came from Vixie Valiant:


Ok, you wanted it, and it's happened, I am in jail for the Relay for Life! Come and donate to bail me out, or maybe I'll stay longer if we raise enough. :) I need to raise $2000L, so here's your chance to see me locked up and help a good cause! 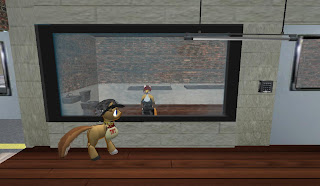 Daaneth put it another way, “Vixie has been arrested for being too cute! Come bail her out.” Other Redheads had different ideas, “Crime was claiming to be cute. False testimony, and all that. (grin).” “I only need 400L to get free.” “Heh, where do I go to donate 2L?” “Is beating up skunks among the charges?”

Getting to the jail, Vixie was in the modern cell, behind glass with just a bench and toilet. In front of her was a brony that looked cute and harmless, except for wearing a satchel full of dynamite. Other Redheads soon came by to put up bail, yours truly among those contributing. And before long, the police declared they had all of it. “I’m free!” “Put her back in!” A couple of Redhead girls had very little clothing on, but the cops made no effort to arrest them for indecent exposure. Maybe the men were happy to see them after a hard day of work, or perhaps too interested in their donuts. This wasn't the first time Vixie had been arrested, last year being held for chicken rustling. 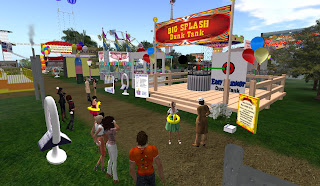 There were other happenings at the sim. A 50’s “Sock Hop” club held various dances, one of the DJ at one point ending up in the slammer himself, supposedly for playing music from the wrong decade. There was also a dunking booth. Relay organizer Poppy Zabelin at one point volunteered to go up there, wearing a rubber ducky float. And a long line of people showed up. Perhaps nervous of the crowd, Poppy offered, “I am donating 50L for every miss!” It didn’t work very good, as she kept falling, falling, and falling, “However much I bribe people, they still keep dunking me!” “It’s their way of showing love.”

Late in the evening, activity slowed down in most places but one. The 50’s drive-in movie had an Elvis double-feature of Blue Hawaii and Via Las Vegas. Among the cars there were a pink Cadilac, a hot rod, and a Delorian complete with flux-capacitor and “Mr. Fusion.” One Redhead commented she had to rezz the car made famous in “Back to the Future” outside on the street, “It was real heck trying to steer it in here.” There were a few jokes made as the movie went on, “Oooo, spanked by young Elvis. She doesn’t know how lucky she is.” “Elvis is dead.” “No, Elvis is alive, living in secret with Michael Jackson.” “Aren’t they in-laws? Would they even get along?”

It was a fun weekend for the Relay for Life. Several people have asked about later “Jail and Bail” events. Plus next weekend is a “Bid me Human” at the “Little Dove” zeppelin club.