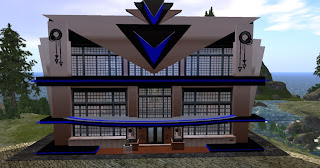 
Djinn Dasmijn, who organized the Build-Off, gave me a sneak preview a few nights ago while he was waiting for the final entries to be delivered. The clocks range in size from a tall grandfather to petite mantle ones. Triangles, circles, arches, and other art deco shapes are featured. Water falls, cats, statutes and more are incorporated into other designs. 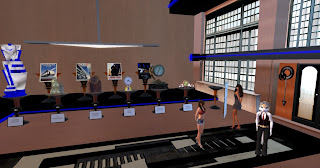 Zardoz Morane’s Rockefeller Atlas clock was inspired by real world New York Rockefeller Center, while Thoth Bellic’s clock has an Egyptian flare to it. Undine Collison’s sparkling marble clock is like jewelry for your mantle.

The clocks are not only lovely to look at, they sound wonderful, too. Every 15 minutes a few clocks chime. At the top of the hour there is a symphony of sound.

The smaller building contests are very popular. While some contestants have entered other contests in the past, many of the entrants are new. “Little builds bring in an entirely new set of builders,” Dijinn Dasmijn said. “Opens up the door for more people to try new things.”

The winner of the clock competition will be awarded a $2000L prize. Half of the money is from the entry fees, and Builder’s Brewery donated a match amount. Voting on the best clock is limited to members of the VMA.

A large yellow arrow that points the way to the “Art Deco Buildoff Display”. Walk on the sidewalk, then up the hill to a circle of buildings. The clocks are in the second building from the left. Inside is an exhibit of Art Deco posters, too.

*Addition* - The winners have now been announced. They are:

The exhibit will be on display through March, 2012.