On Saturday March 10th, the Relay for Life in Second Life began it's official 2012 fundraising campaign with it's "Kickoff" event. There had been a few fundraising events beforehand, but the planning committee as well as most Relayers preferred to wait until the season had began. By all means, that didn't mean a lack of enthusiasm. In the RFL group, people had eagerly awaited the Kickoff for days. 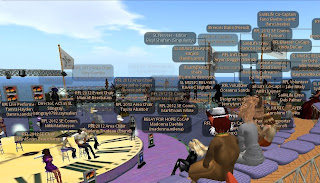 The Kickoff took place in four sims set up next to the ACS (American Cancer Society) sim, appropriately named Past, Present, Future, and Discovery. People sat in seats in a circle around the meeting point of the four sims, while the speakers and the planning committee stood in the center on a round podium that would regularly switch between several clock faces. MamaP Beerbaum is this year's Chairwoman of RFL in SL. Dwen Dooley and Nikki Mathieson are the co-chairmen.

The event began at 10 AM SL time. Anticipating a packed attendance, even with four sims, people had been gathering early to take their seats. And packed it was, with numbers reaching over 150 at times. For those who couldn't make it, T-1 Radio broadcasted the event over the Internet. And for those who made it, the lag meant it sometimes took a while for everything to focus. Noted Relayer RacerX Gullwing was quickly noticeable in his cartoonish rabbit avatar. Others soon came into focus, such as Fuzzball Ortega whom last year gained publicity for his team the Steelhead Salmons through his massive hairpiece. A number of men from the Ammaretto Horses team were therein a group, noticeable with their bare chests.

"Good morning Relay nation," the audience was greeted, "Welcome to the Relay for Life 2012 Time for a Cure." What followed was a description of how the Relay for Life began in real life in 1985 and how it grew. Then came the start of the Relay in Second Life, which was described as being regarded with skepticism at first, but the doubts soon vanished with the donations coming in. And over time the donations grew, from a total of five thousand US dollars in 2005 to $375,000 in 2011, involving over 2100 avatars in over 140 teams.

"Thank you all for all you do," the Relayers in the audience were thanked, "We aren't just cartoons." There was some talk about recent changes to the sims, then came a recorded message from Pipa Rexxen. She talked about meeting someone, and then the man getting news he was sick. Then came news the cancer was inoperable. Just as the last Relay season was starting up in March 2011, he finally lost the battle. She wrote a poem to honor him, which was put into song and sung at the event, "Until there is a cure, there will be more angels here on Earth than in Heaven."

Following "Until" was a reminder that 1,500 people a day die from cancer. Then came a listing of the Relay for Life in Second Life's sponsors, such as Peace Haven Communities, Avalon Town, Amaretto Breedables, and Houses for You. And then came a list of the teams, such as the Steelhead Salmons and the Passionate Redheads. Then came another song, "One Moment in Time" 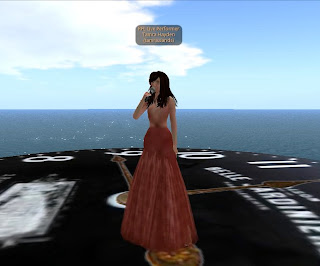 The Kickoff soon came to a close, "Well, it's time to Relay." People were reminded that 35 events had been scheduled, and 15 were starting that day. As the people got up, many to leave to look around the four sims or go to events that were already starting or about to, another song played, one from the play Don Quixote, "The impossible Dream." Then singer Tamara Sands continued for those still listening to the radio with a song she had written in honor of her late husband, "If I Could Look Into Your Eyes Again."

Unfortunetly for the reporter covering the event, three of the four sims had crashed and were still the appearance of water just after the Kickoff (Trader1 Whiplash joked "It's Sting's fault, he did say let's crash the sims"). The one left was RFL Past. Still, there were a few exhibits, such as a rideable dinosaur and an Egyptian maze. The four sims were reportedly scheduled to come down within 24 hours, but as of when this article was being written, a glance at the map showed they were still up.

And so, the Relay for Life fundraising season in Second Life begins.

"Thank you all, see you at the Relay."

*Edit* For a recording of the Kickoff, Go Here.