Storytelling by Otter at Spirit Nations

When I was drawn by one of many notices that I get in Second Life, I saw a notice for a best in uniform contest at AX with Dj Sveta. I had some fun goofing off in a uniform; who wouldn’t?
Then I saw a different notice, “Storytelling by Otter at Spirit Nations.” I wanted to try something new and different, and I was always fascinated by Native Americans and their culture. I told everyone at AX, "bye, I’m going to check this out." 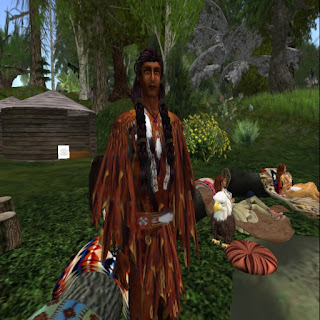 When I arrived at Spirit Nations, located around a campfire were many Native Americans .Some of them greeted them me with their word for hello or maybe greeting which was O’soyo. I greeted them back. I heard a couple people in voice chat. One of the things I overheard was that the story teller Heartspeaker was in silent prayers asking the spirits for blessing to share his stories. He could not speak until his prayers and ceremony was complete. To top it all off the persons attending were in Native American skins and looked very real.

When Heartspeaker finished his prayers and preparation he spoke in voice chat. His voice was grandfatherly, but still filled with vigor. He was happy to see so many people there to tell his stories to. His pacing was perfect to listen too not to fast not to slow.

One of the stories he told was about the creation of the world. The Great Spirit, or another noun he used was the creator, molded the mountains and sky. Later he placed animals and people there which he called movers. The creator tried very hard to think of a perfect world, but he was so tired so he fell asleep. When he woke up animals and people were spread across the earth. He let it be as an imperfect world. 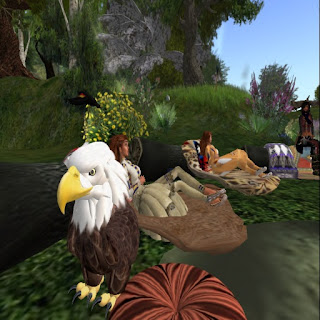 Another story he told was about Sarduk the cold of winter and Neochin the warmth of summer. The two of them fought battle after battle in control of the earth. Eventfully they came to a truce that Sarduk would be in control through the fall and winter. In trade Neochin spread warmth through the land during the summer and spring.

Another story that was neat to listen to was about Thunder and the Raven. Thunder was a powerful man, bullying people, killing them, and taking their eyes. One man was very upset as Thunder stole his wife abusing his power. The warrior vowed to get back his wife. Everyone was scared for this warrior and Thunder was a horrible and terrible man.

Eventfully the warrior ran into Raven, and Raven assisted him by giving him a raven wing and an elkwood bow to fight the horrible Thunder. Raven covered the warrior’s eyes with his wing and then the warrior saw Thunder’s lodge. The warrior came to the lodge and Thunder thought the warrior was crazy. Thunder said, "how could you challenge me! You’re just a man." All within the lodge were eyes of people that Thunder attacked and stole their eyes from. It was a horrible sight.

The warrior brought out the raven wing and Thunder was weakened. Thunder stood up again, but the warrior drew back his elkwood bow and shot an arrow into the stone behind the terrible man. Thunder was weakened more and he begged for mercy. Thunder restored sight to all he took sight from and stopped bullying people. Thunder realized that not even he could challenge the creator. Raven had restored order in the world.

Midway through the event I spoke up by realizing that Heartspeaker’s otter animal totem is associated with sharing and joy (I looked this up in the animal book I have, "Animal Speak" by Ted Andrews). Heartspeaker indeed was acting like his animal totem by sharing the stories and being a joyful person. I seemed to hit the nail on the head as a couple people agreed he had powerful medicine as he spoke from the heart and speaking from the heart and sharing is very powerful. 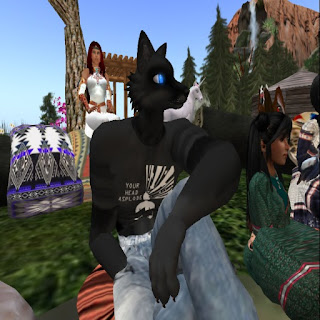 The quote he did say which made a lot of sense was that, "when there is silence you can hear and see the difference between the ordinary and extraordinary." In this day and age that seems to be easily forgotten as everyone is surrounded by electronics and a busy life.

If you get the chance check out Heartspeaker at Spirit Nations at 1PM SL time every Thursday. When you hear his stories through his voice and not just words to read maybe you can see between the ordinary and extraordinary yourself.

I could say something extraordinary happened Heartspeaker said over voice chat “Grease Coakes seemed like a good person." Then he added me, a person he never met before, on to his friend list.
Grease Coakes.
Posted by Bixyl Shuftan at 6:00 AM