On Sunday December 8th Bay City celebrated three hours of music, dancing, ice skating and fun to mark the lighting of the Bay City Christmas Tree. The festivities were also for a cause: Child's Play whose charitable aim is to help children in hospitals with money raised by the gaming industry. Their slogan is: When gamers give back, it makes a difference. To help raise funds many content creators had donated items to Bay City, and these were placed in an area where residents could 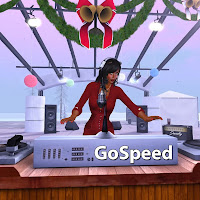 GoSpeed Racer was the deejay for the beginning hour, and she spun holiday tunes that were well-known and esoteric. The crowd made a conga line and cheered on the music choices. All of the revelers decided to load test the conga pose balls, and managed to crash the parcel. This is just the kind of fun Second Life™ residents expect at an event..

Christov Kohnke was up next. He might have been short in stature, but  this kid rock pounded out blues on his assorted classical and rock guitars, that he used to accompany his folksy, bluesy voice. By the time he finished his set, the crowd had grown to one frame per second slowness, and Marianne McCann was screaming holiday wishes to all: "Laggy Christmas!" 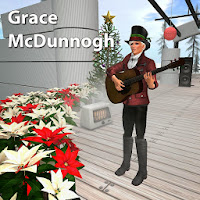 The last performer was Grace McDunnough, adored by many for her sultry voice, and her ability to connect with her audience. She told use that we would be tortured for the next hour with holiday songs, but, alas, she was wrong. The crowd was appreciative of her talent, and the day closed out with most of the crowd wishing for more.

If you weren't in the mood for dancing you could go ice skating, or wander the Linden-created lands of Bay City. In addition, the tree is located right in the center of the skating rink. The tree had a number of decorations, including ornaments by BlueGin Yifu and Hyper Mole, whom have passed away.

The event was a great one for people watching, and the paparazzi from the press (cough, cough) snapped pictures with abandon. 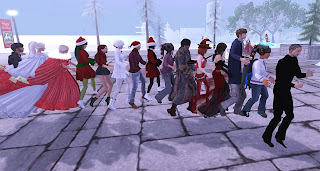 Here are the auction totals hot off the press, thanks to Marianne McCann: The event raised a stunning L$50,207. Here are the individual silent auction winners: 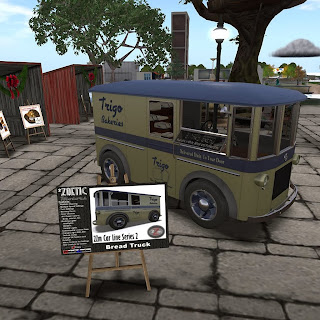 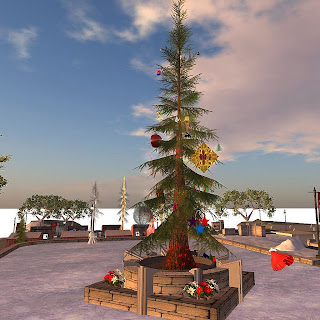 Near the end, Ever Dreamscape gave her thanks, "On behalf of the Bay City Alliance I would like to thank the many people who came out today and who helped organize and donated to this event.

"We would like to thank our wonderful performers: GoSpeed Racer, Christov Kohnke and Grace McDunnough!

"A BIG thank you to the the many generous persons who bid and also donated to the childsplaycharity.org kiosks!

"We would like to thank Marianne McCann, Pygar Bu, and The Linden Department of Public Works, esp. Michael Linden for decorating this beautiful sim!

"We would like to thank the Bay City Alliance for organizing this wonderful event, in particular Marianne McCann our (unofficial) Mayor! (yay)

"And a very special thanks to ALL of the people who came out and made this such a success today! We LOVE having you here in Bay City!! Please come back again SOON!!!"