Over December, Madpea, famous for their games, held their "Holiday Havoc." There were two sims for the event, one Halloween-themed, one Christmas themed. There was a game in which players tried to stop a "war between the holidays," and a hunt in which residents could gather up some cool items. After New Years, it was time for the event to go. But the Madpeas didn't just take it down. They held a "Blow-Up" party from Friday January 10 to Sunday January 12. And on the final hour starting at 1PM SL time, the place began to come apart. Kess Kessel was the DJ for the event. 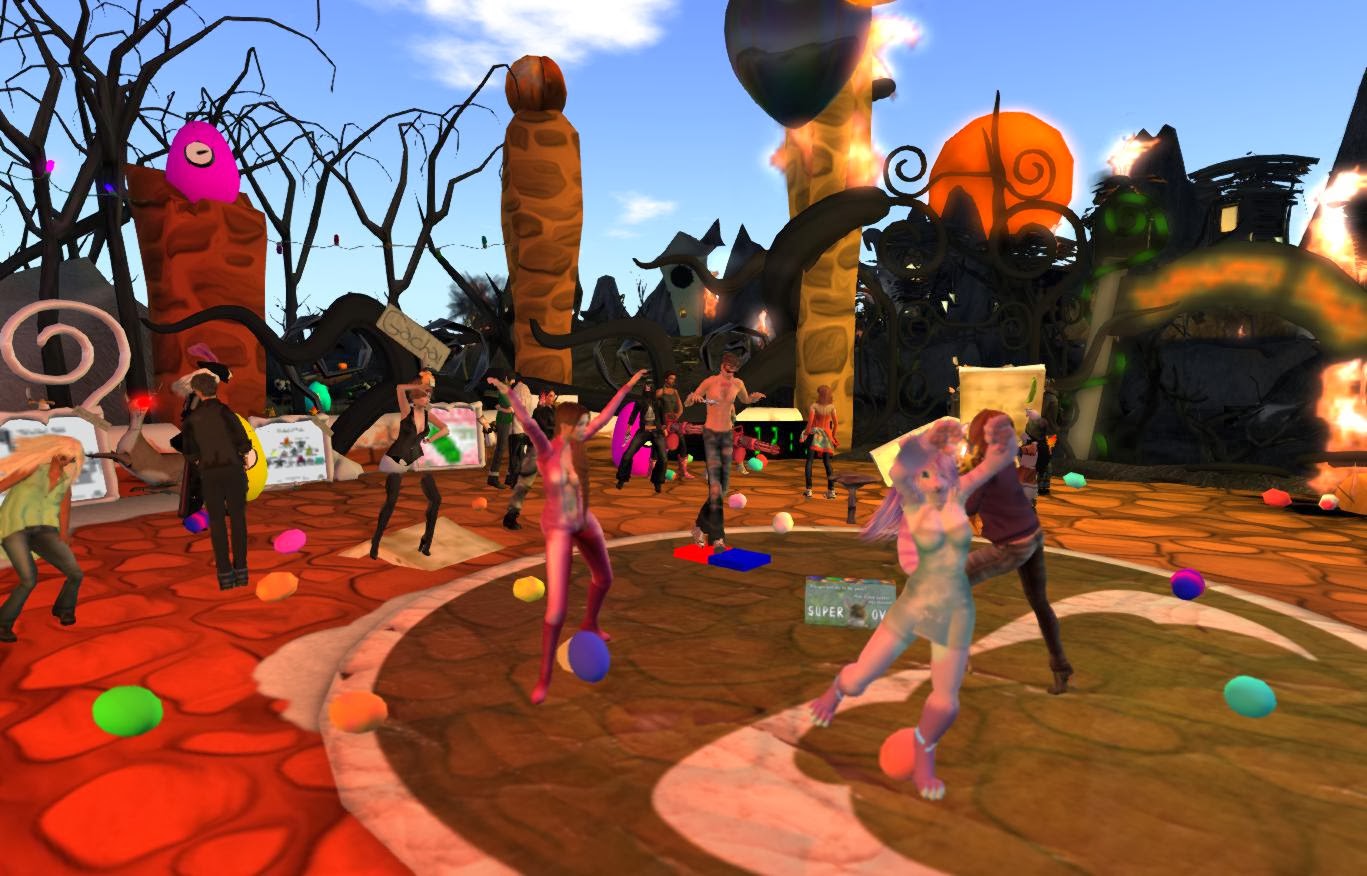 With the end of the show and Holiday Havoc approaching, the partiers reveled in anticipation. 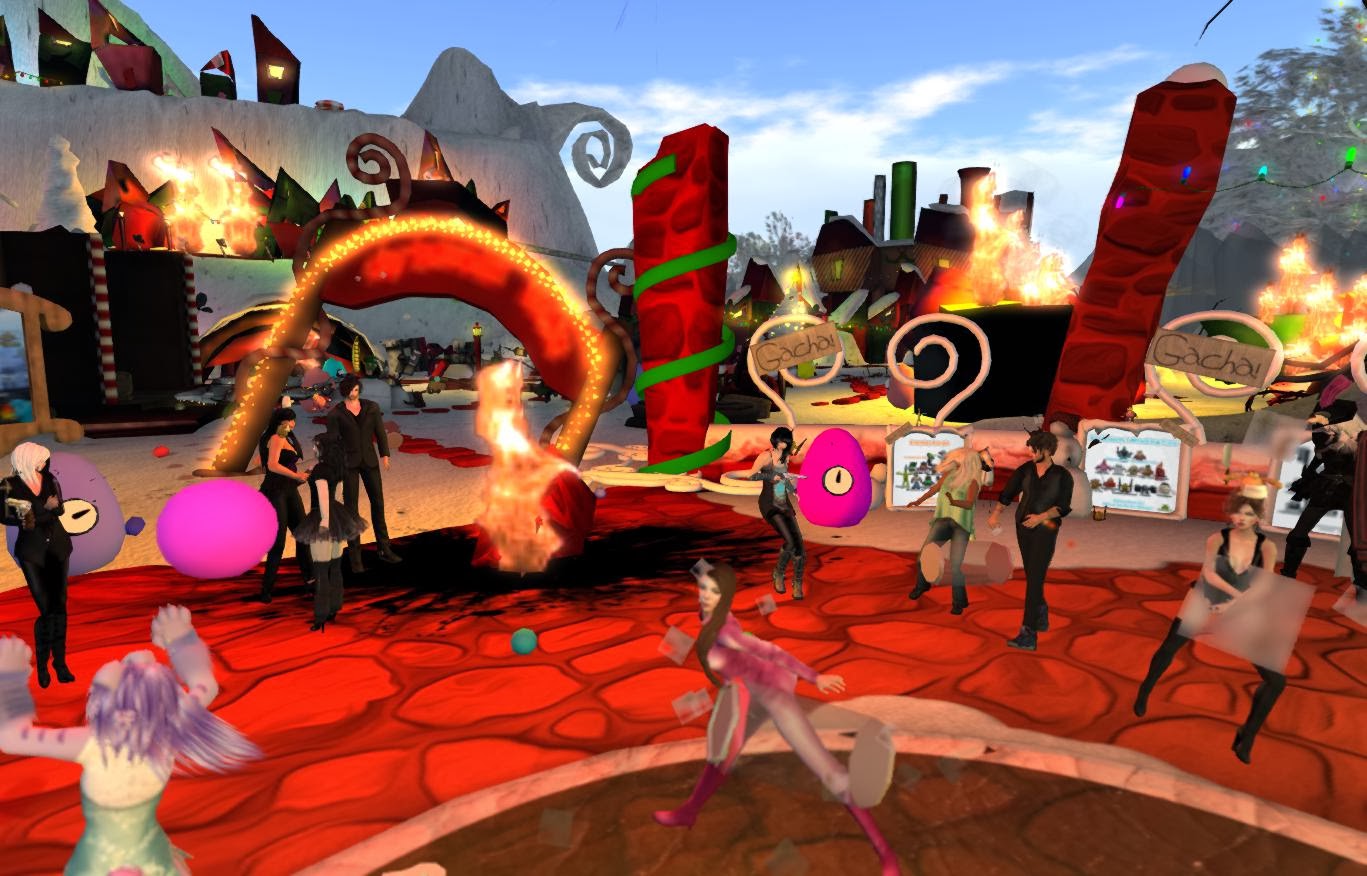 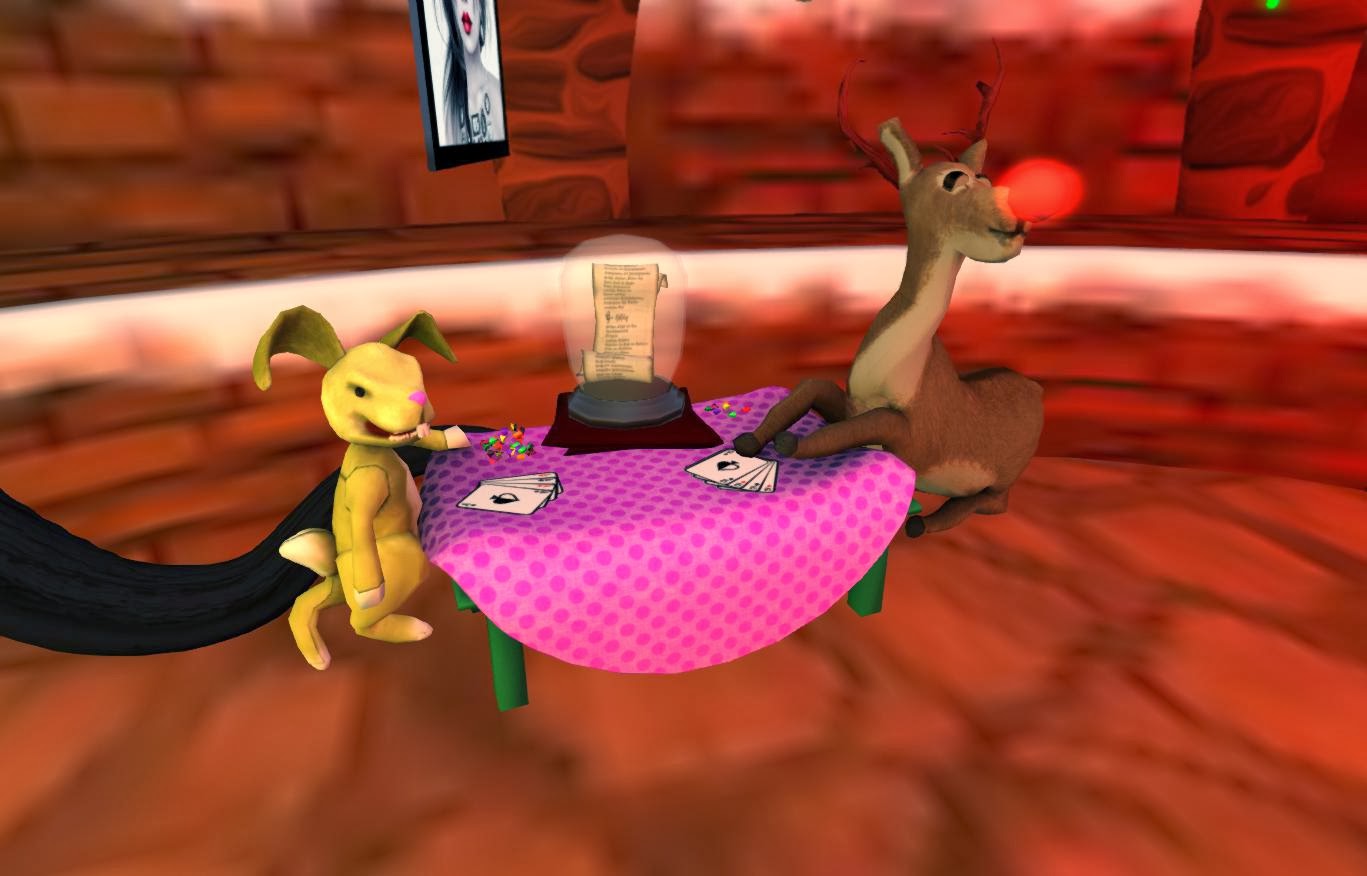 Rudolph and the Easter Bunny play cards, occasionally glancing at the mayhem. Say, wasn't the reindeer supposed to have been killed at the start of this mess? 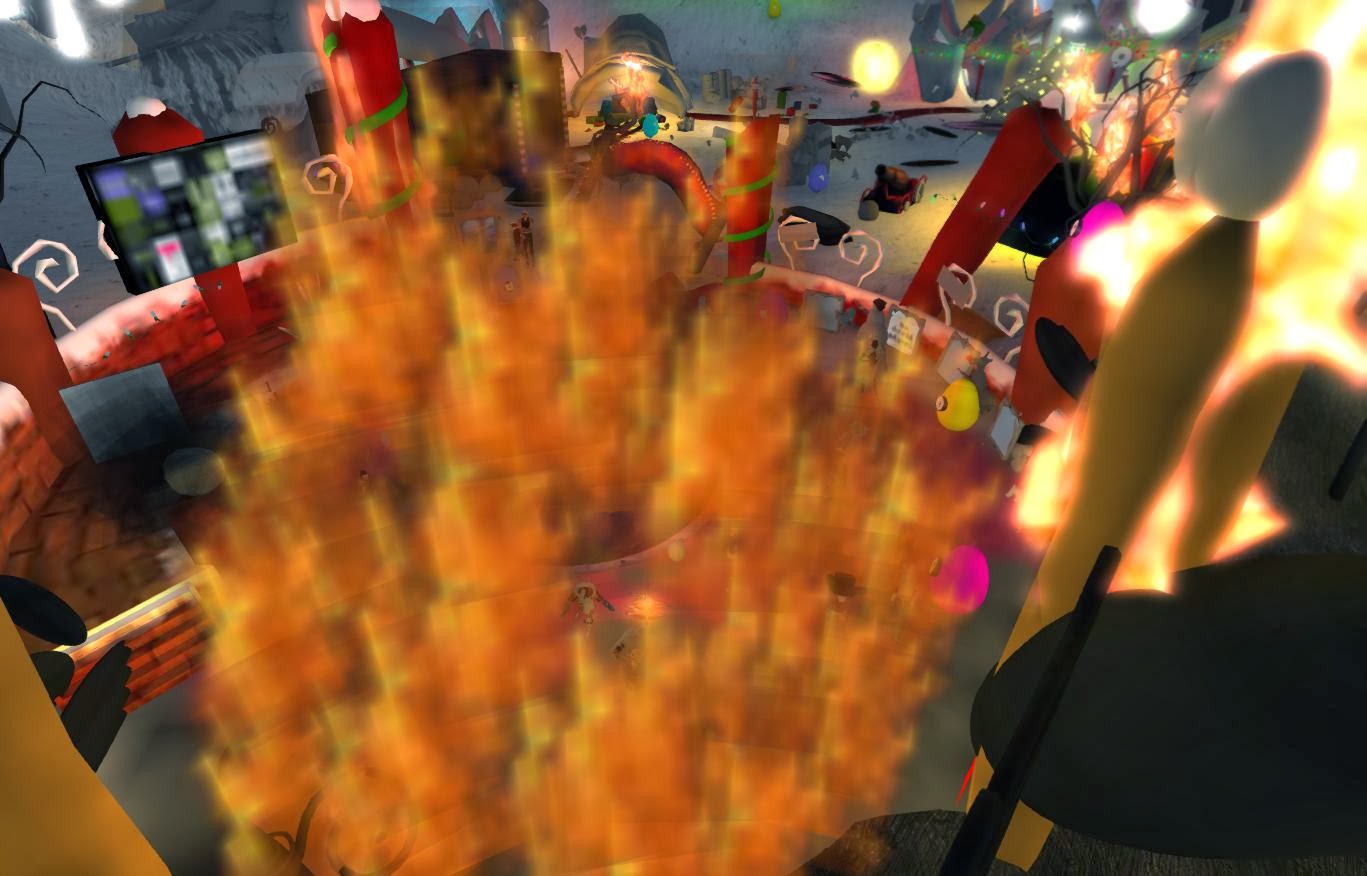 Just after dropping by, the dance floor had a sudden eruption of flames. Nobody got singed, though. It just egged on the "Peas," as Madpea fans are sometimes called. To add to the mayhem, some brought out wacky weapons, like this potato launcher. 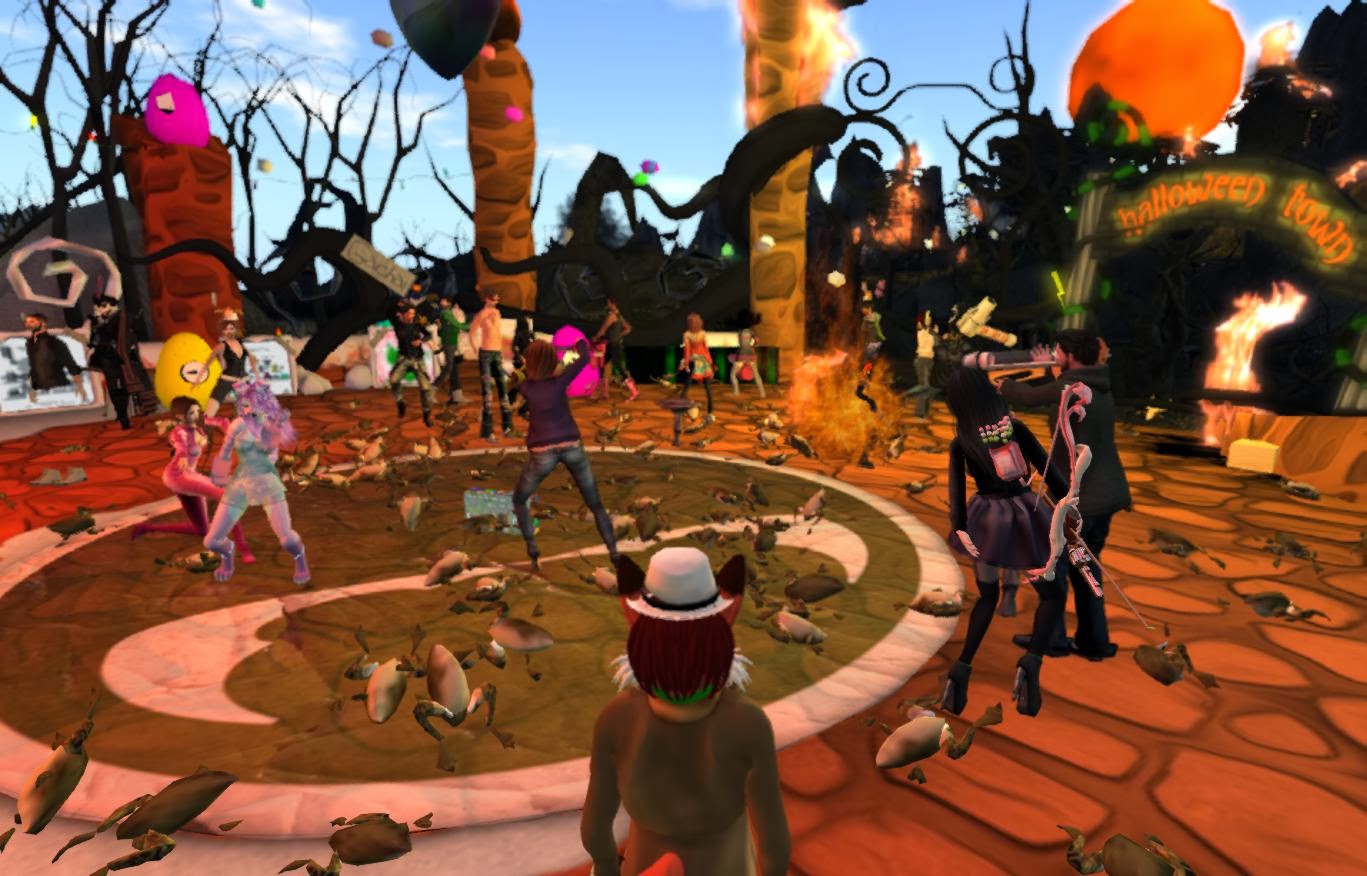 Wasn't this one of the Seven Plagues of the Pharaohs? The frogs did the wrong kind of croaking. 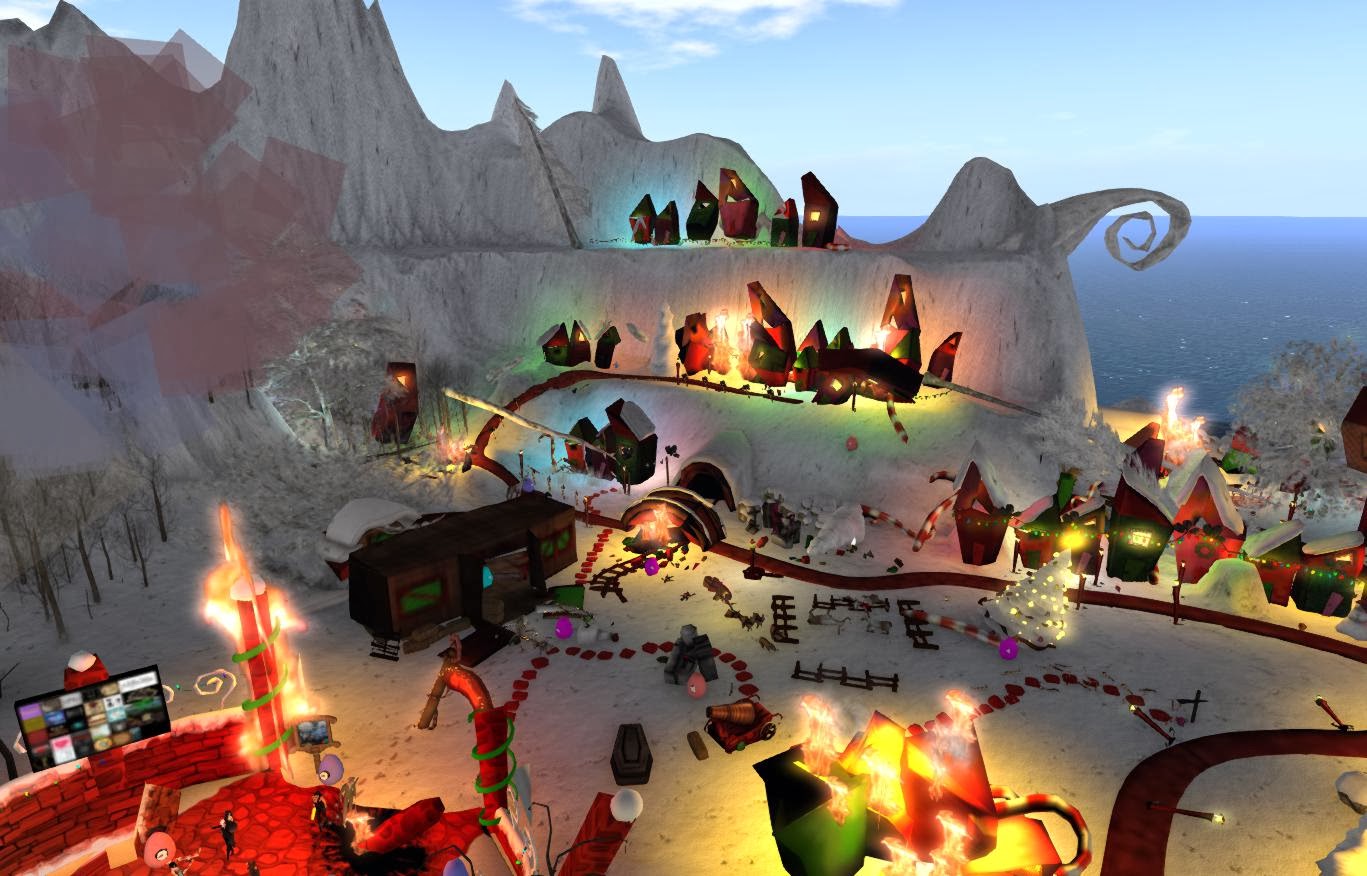 Next to the event, Christmastown, already shaken up a little as the end is near. 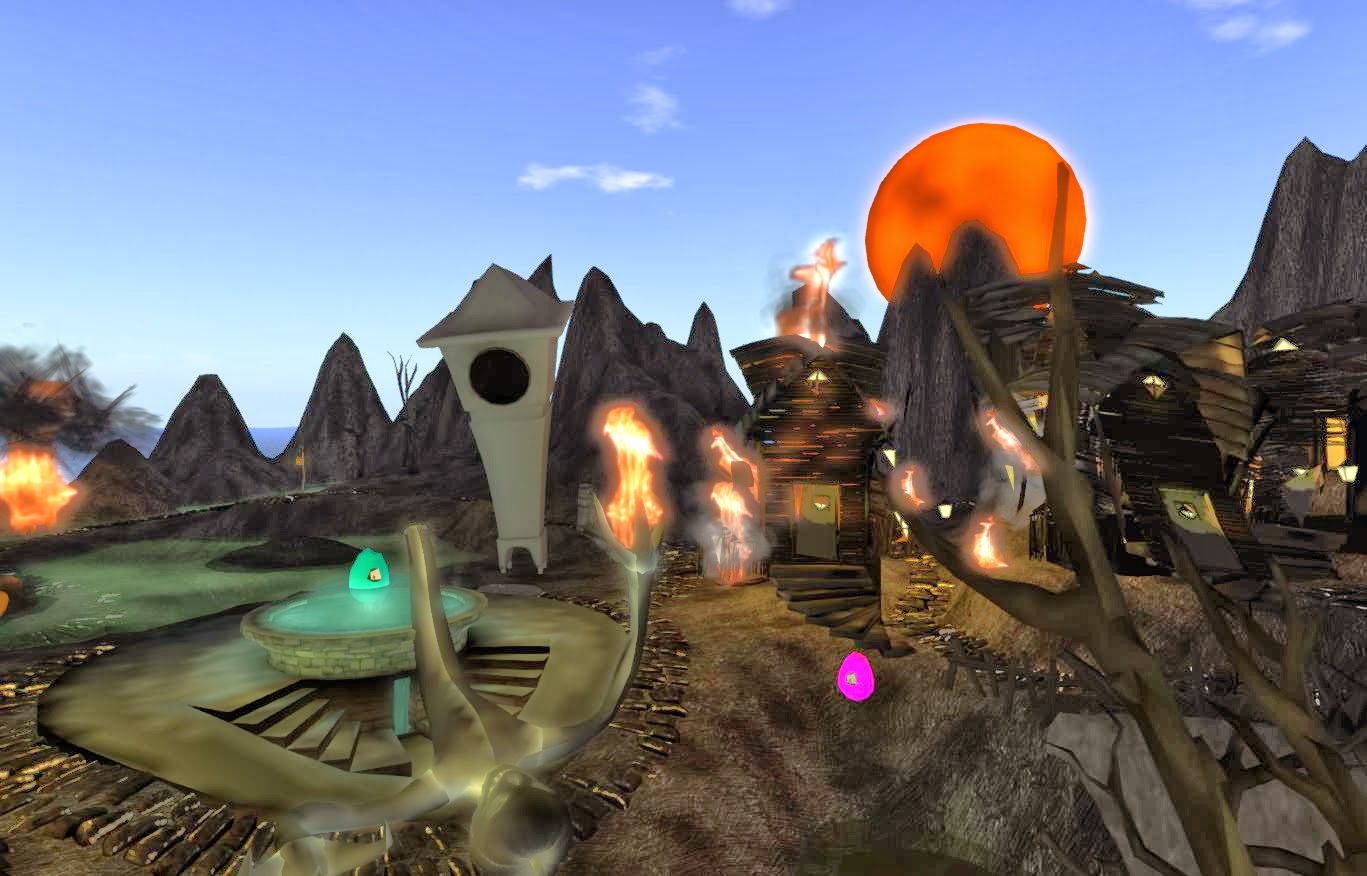 And there was Halloweentown, which doesn't look quite as bleak in the daytime. Only at night does it's true gloom show. Someone with a "TAB" gun, the predecessor to Diet Coke in the days before aspartame, launched a number of sodas around. 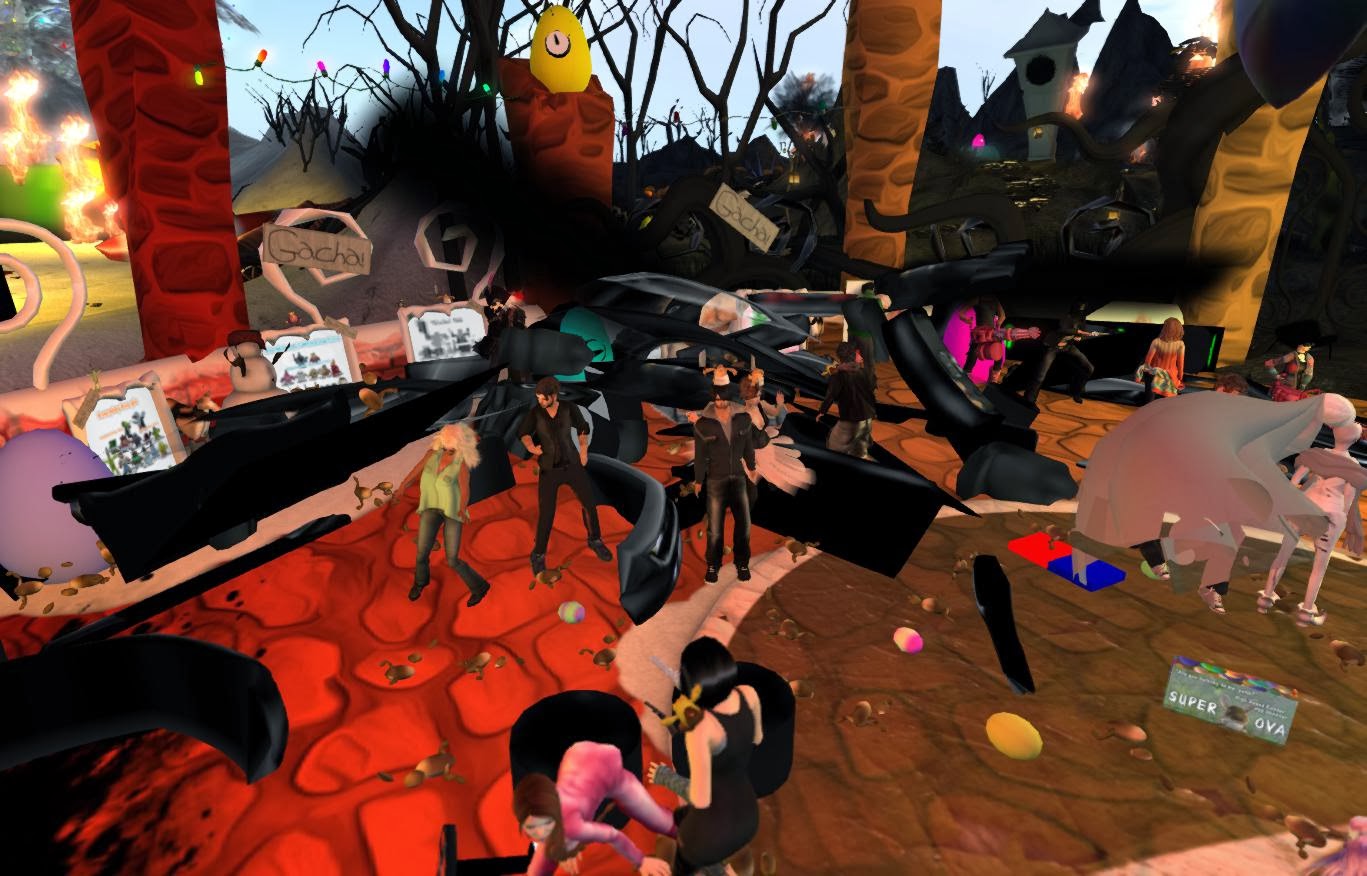 Part of a wall collapses, resulting in more cheers. 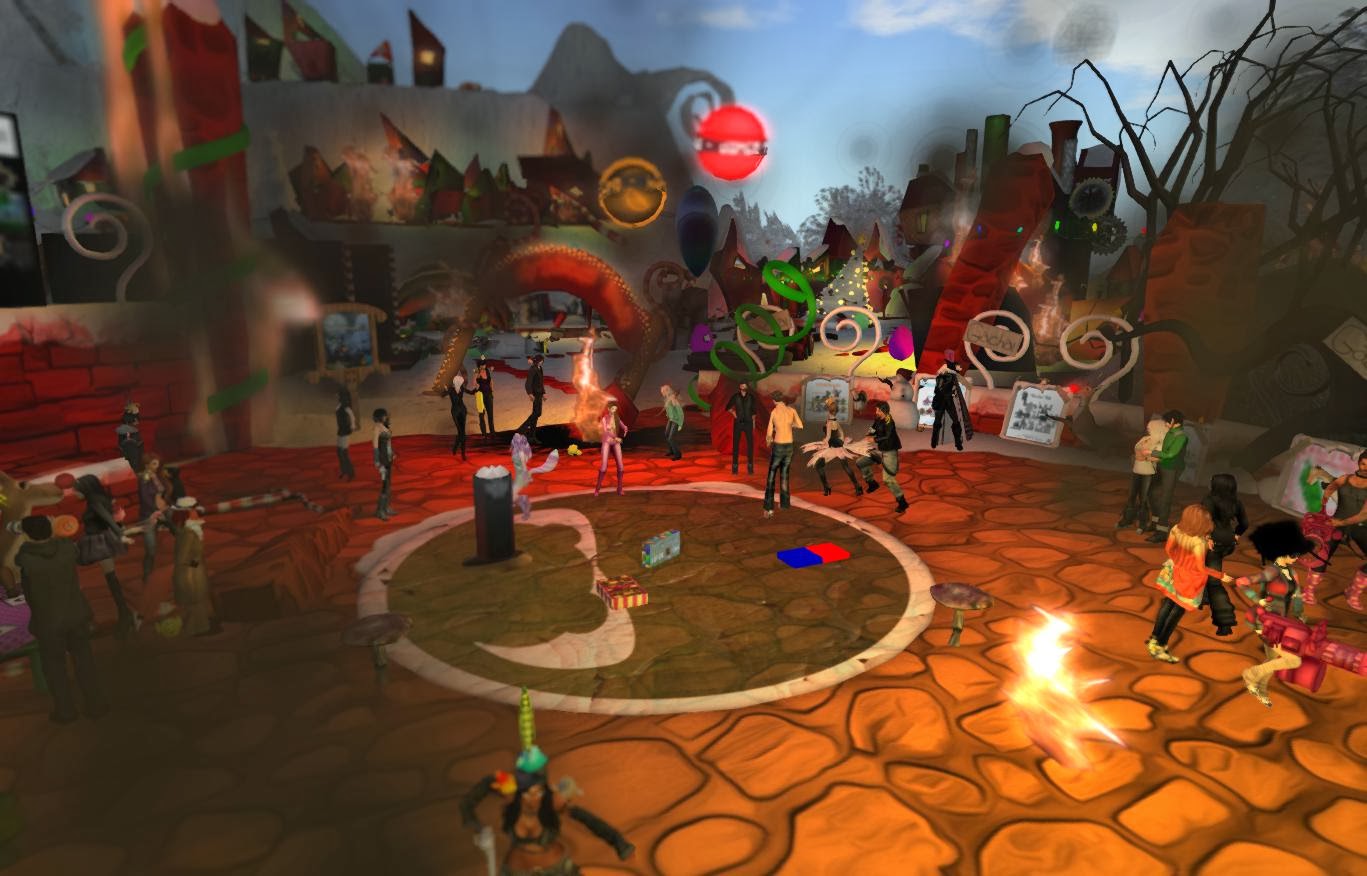 Smoke from another explosion. 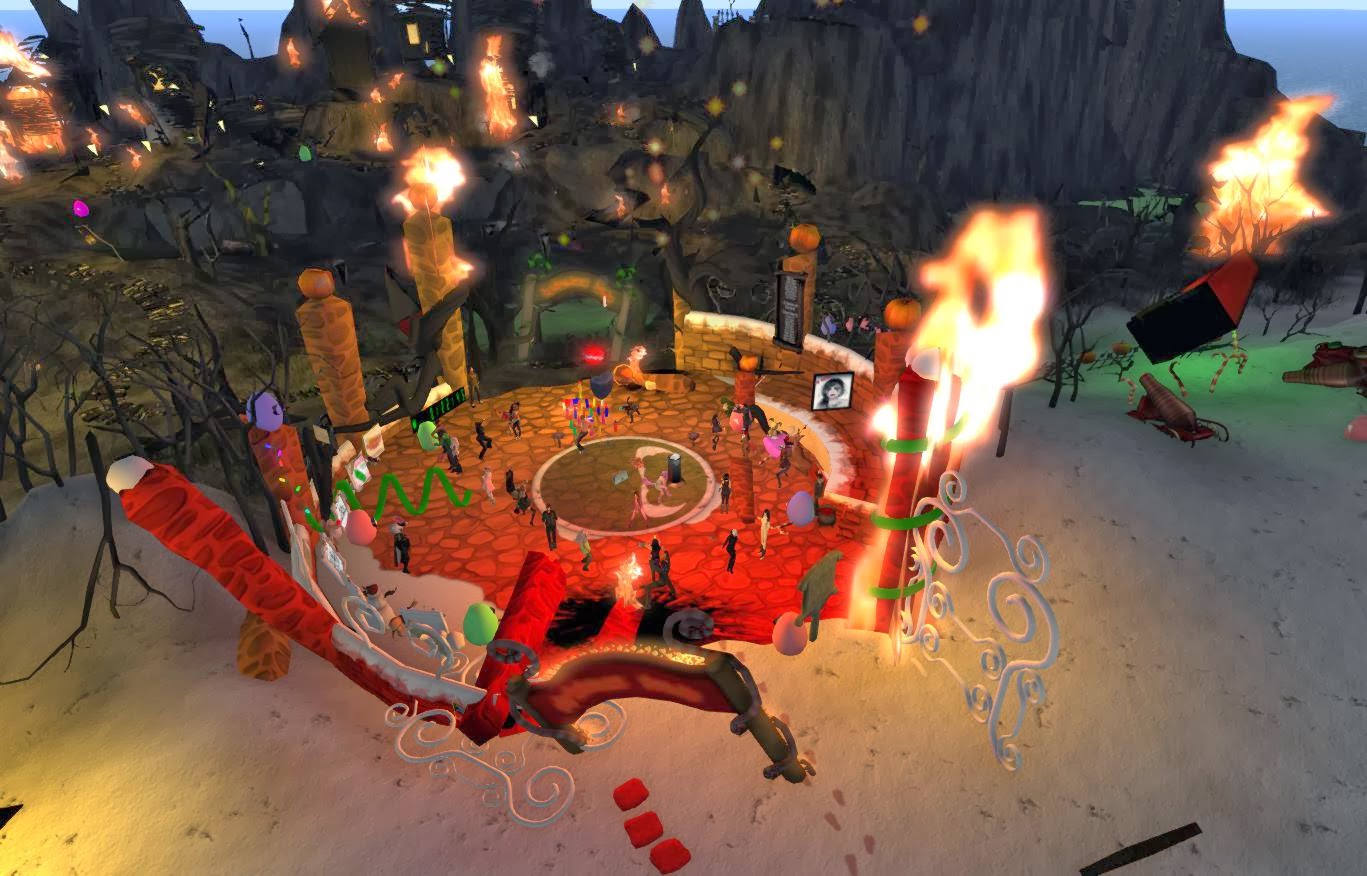 The pillars around the dance area start to collapse. 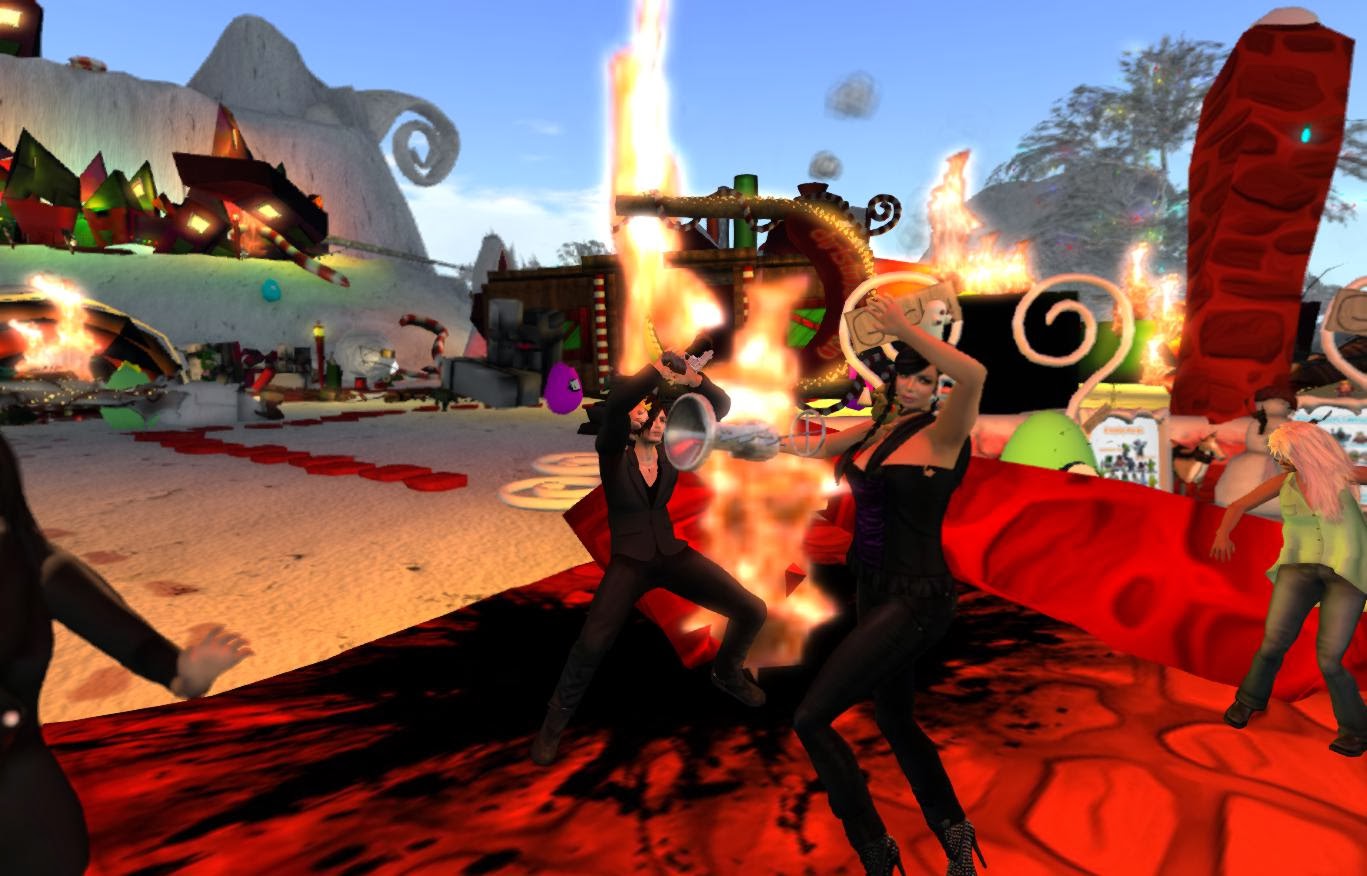 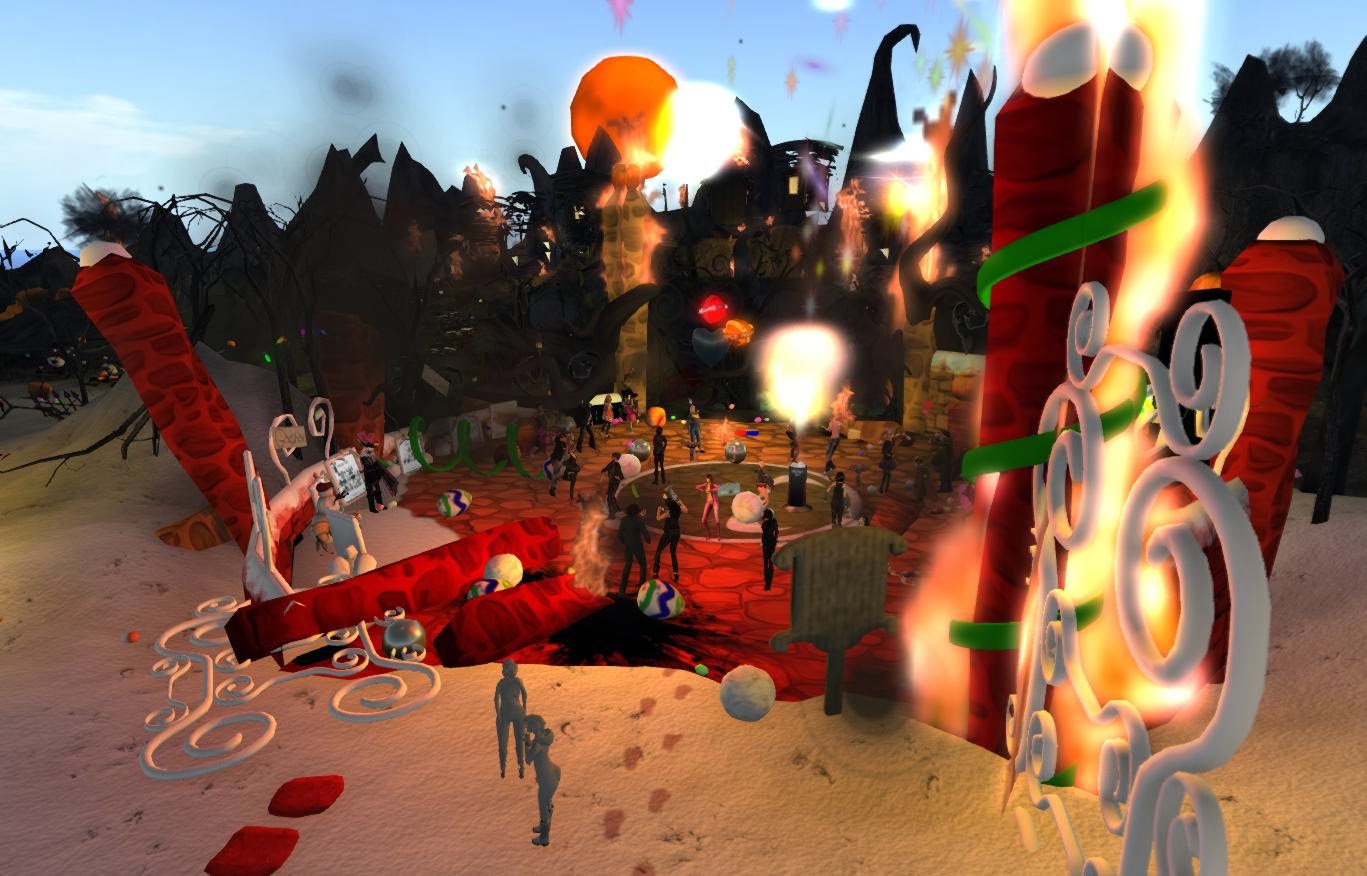 More of the dance area, and other things in the Havoc, crumble and fall. 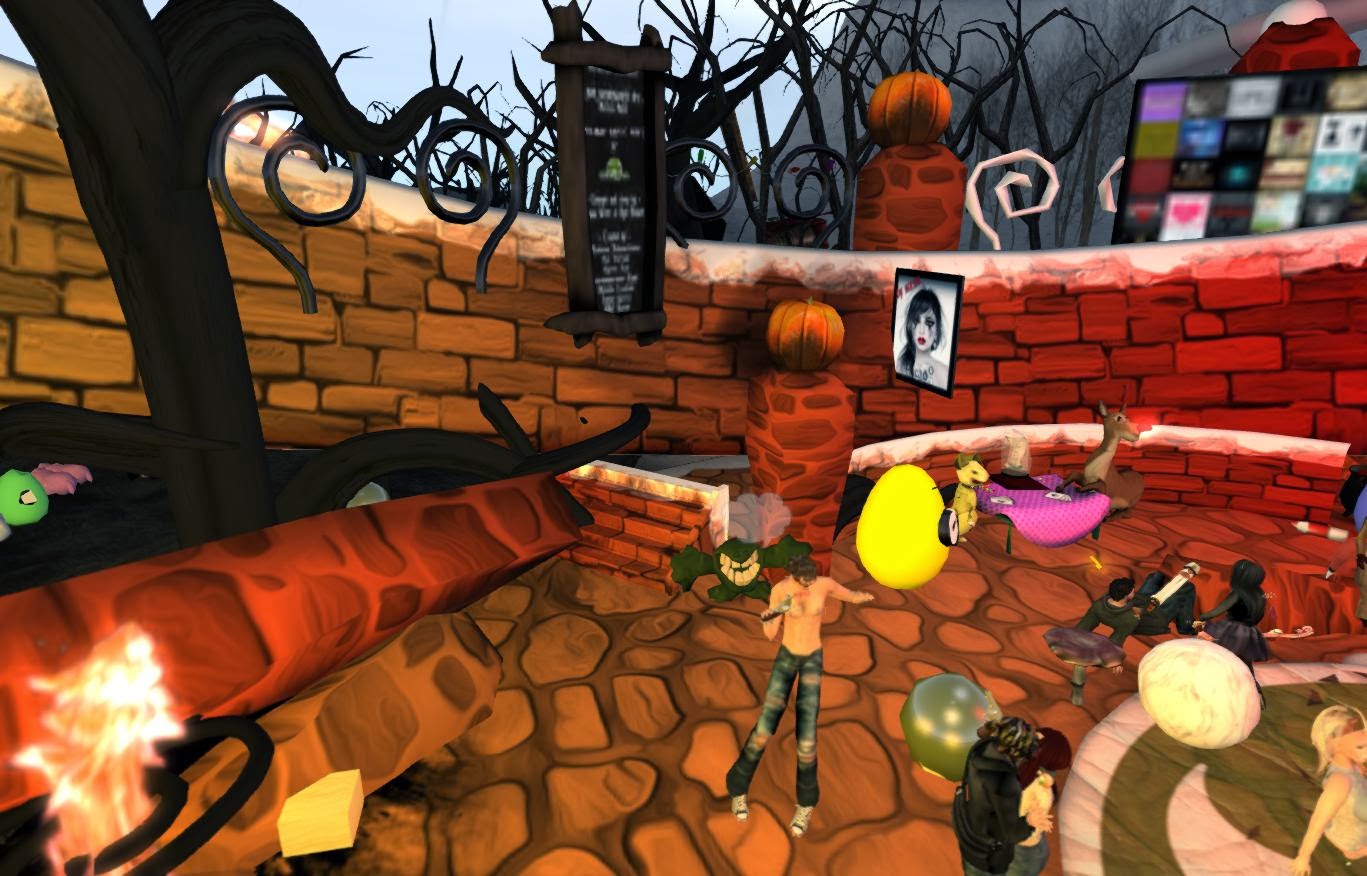 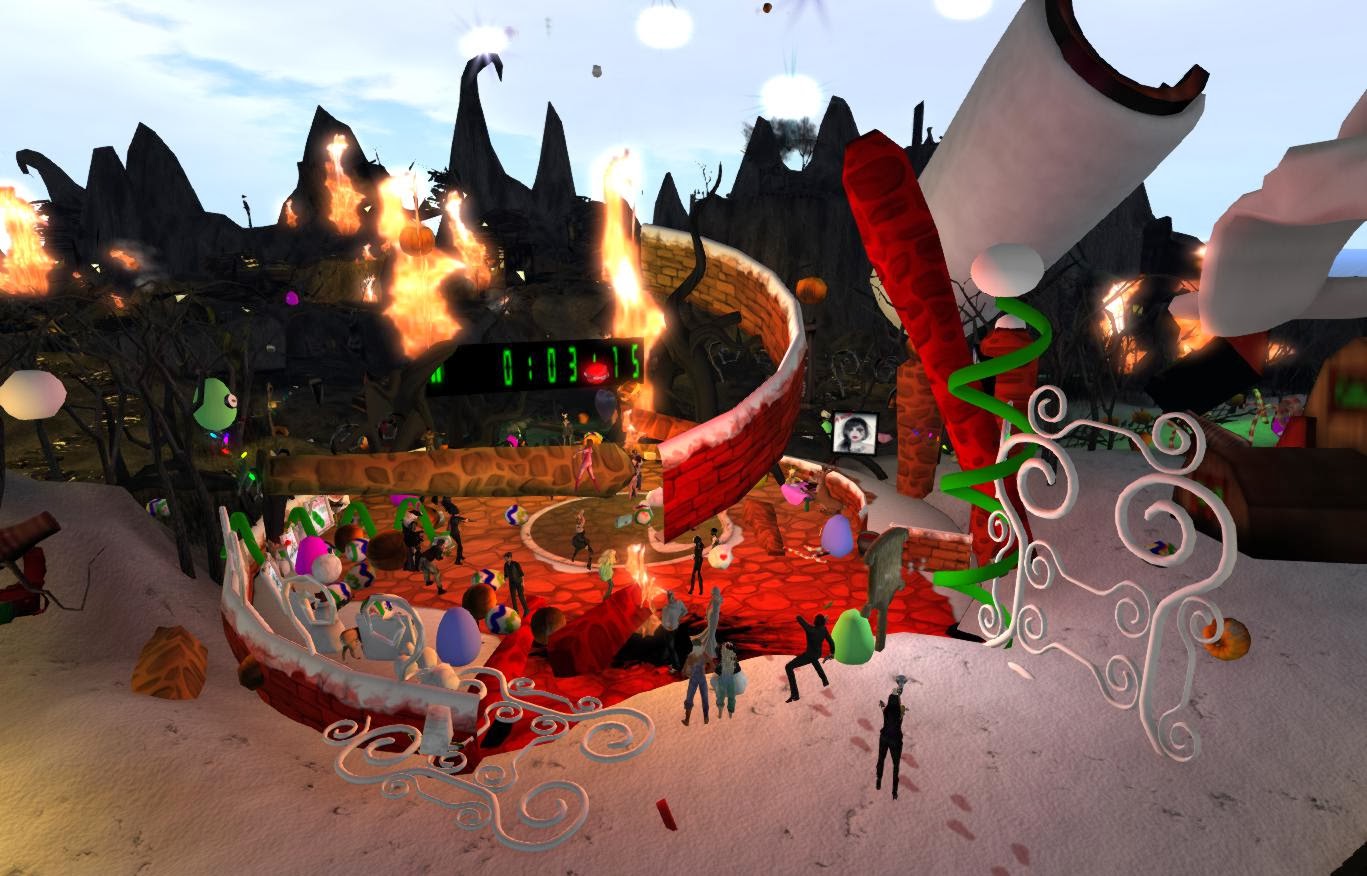 As the hour is upon the "Peas," the destruction intensifies, entire sections of wall fly up into the air. 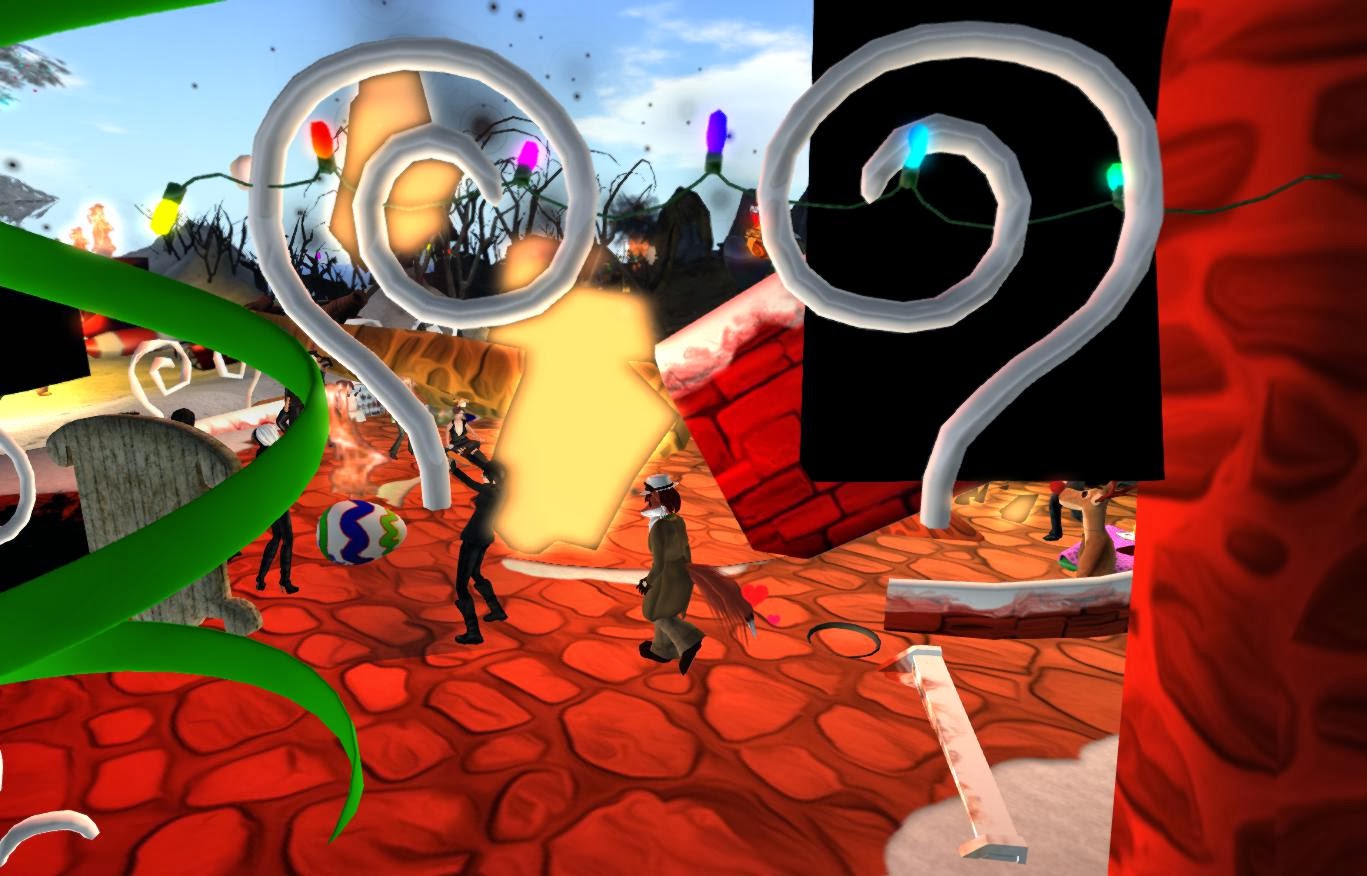 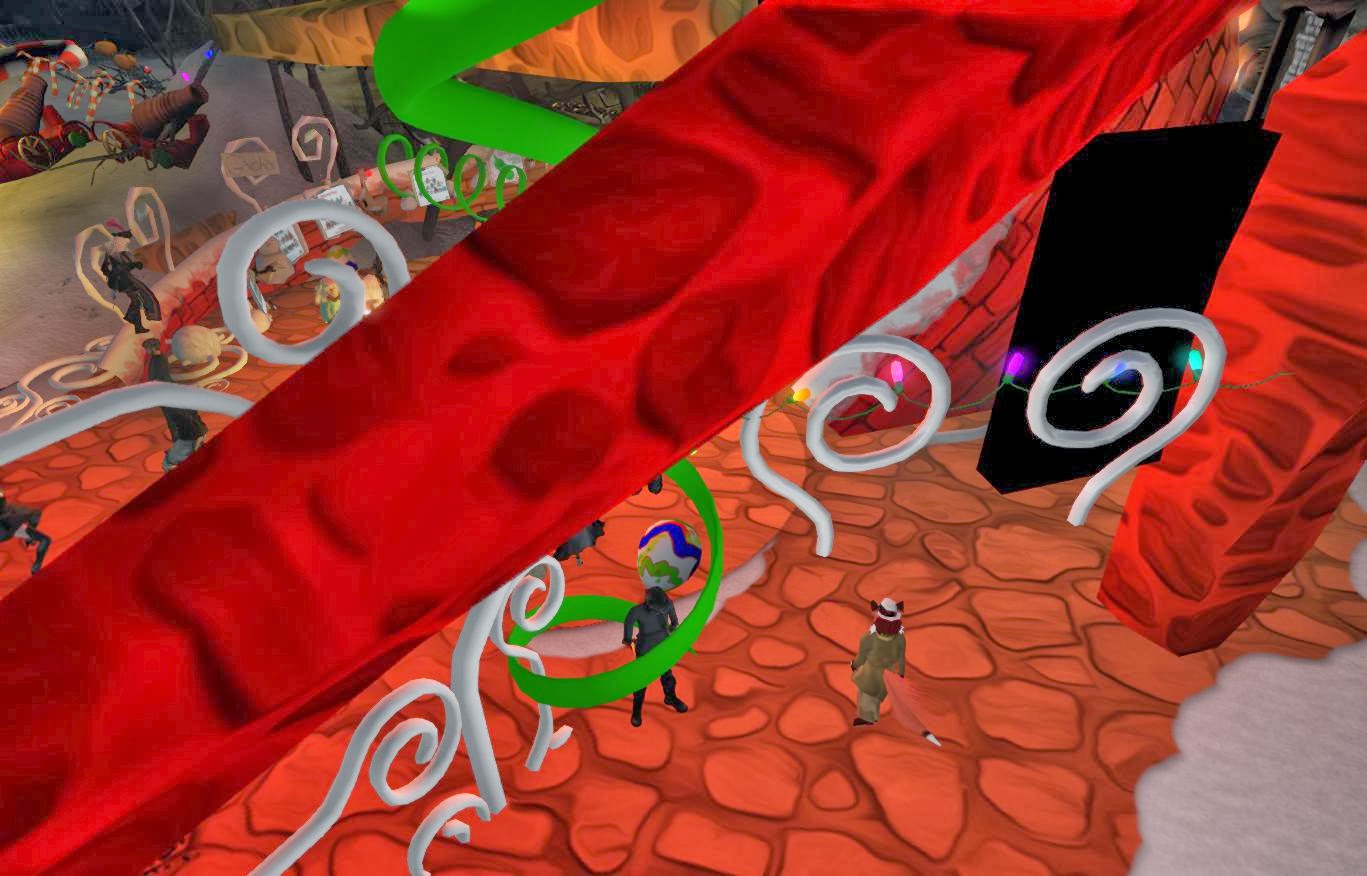 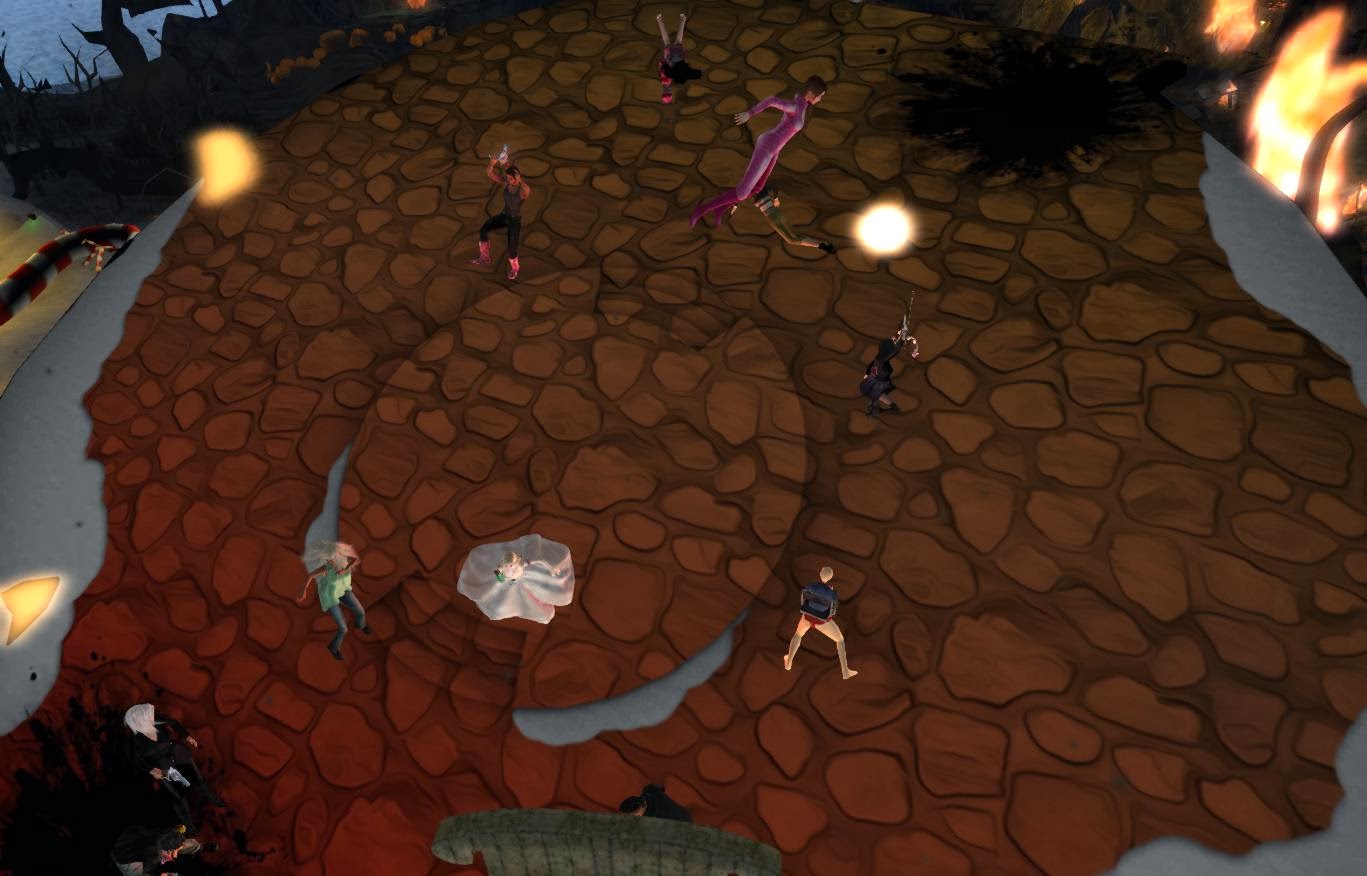 As sections fly in all directions, even the floor comes loose and flies up into the air. 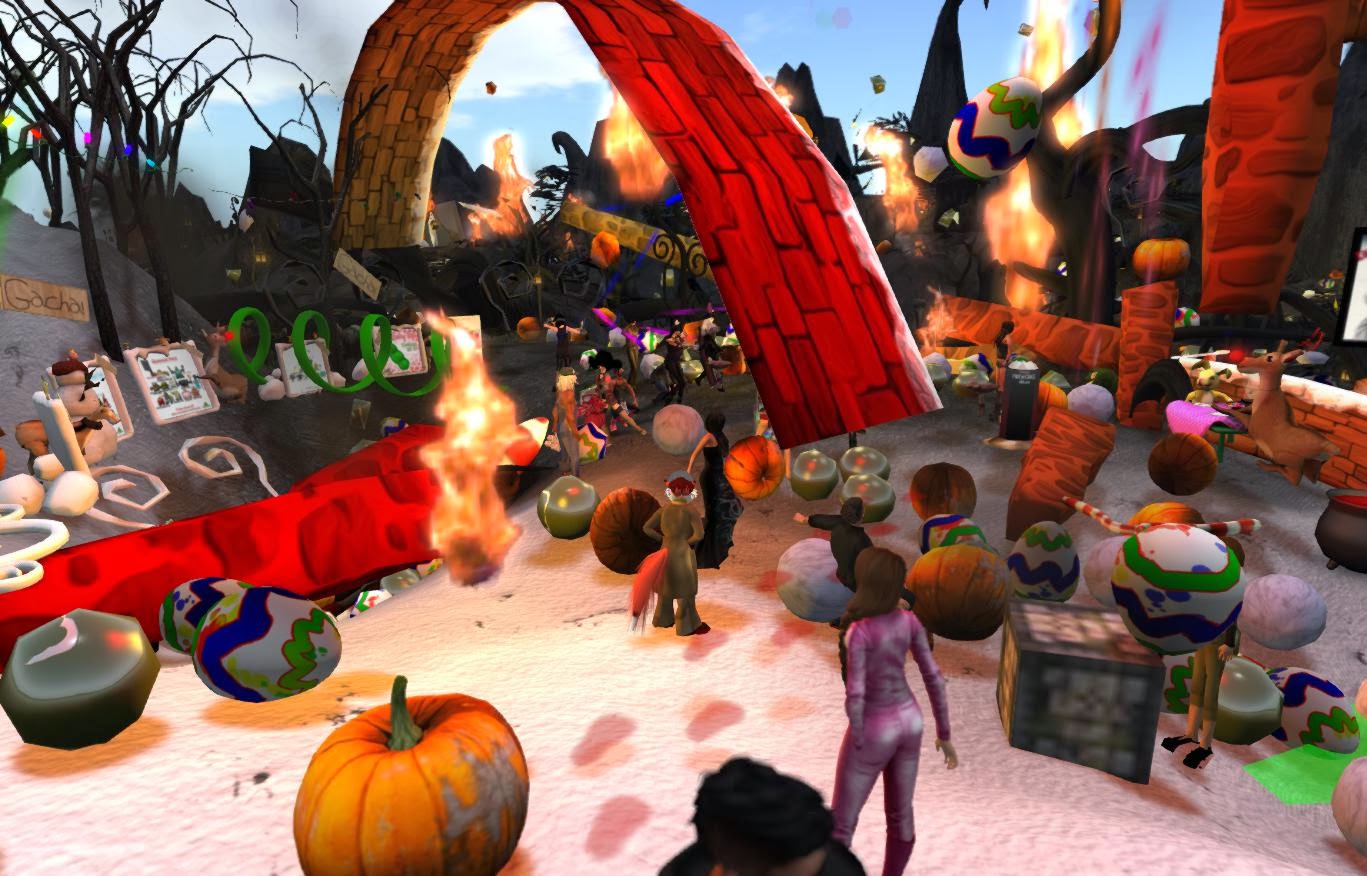 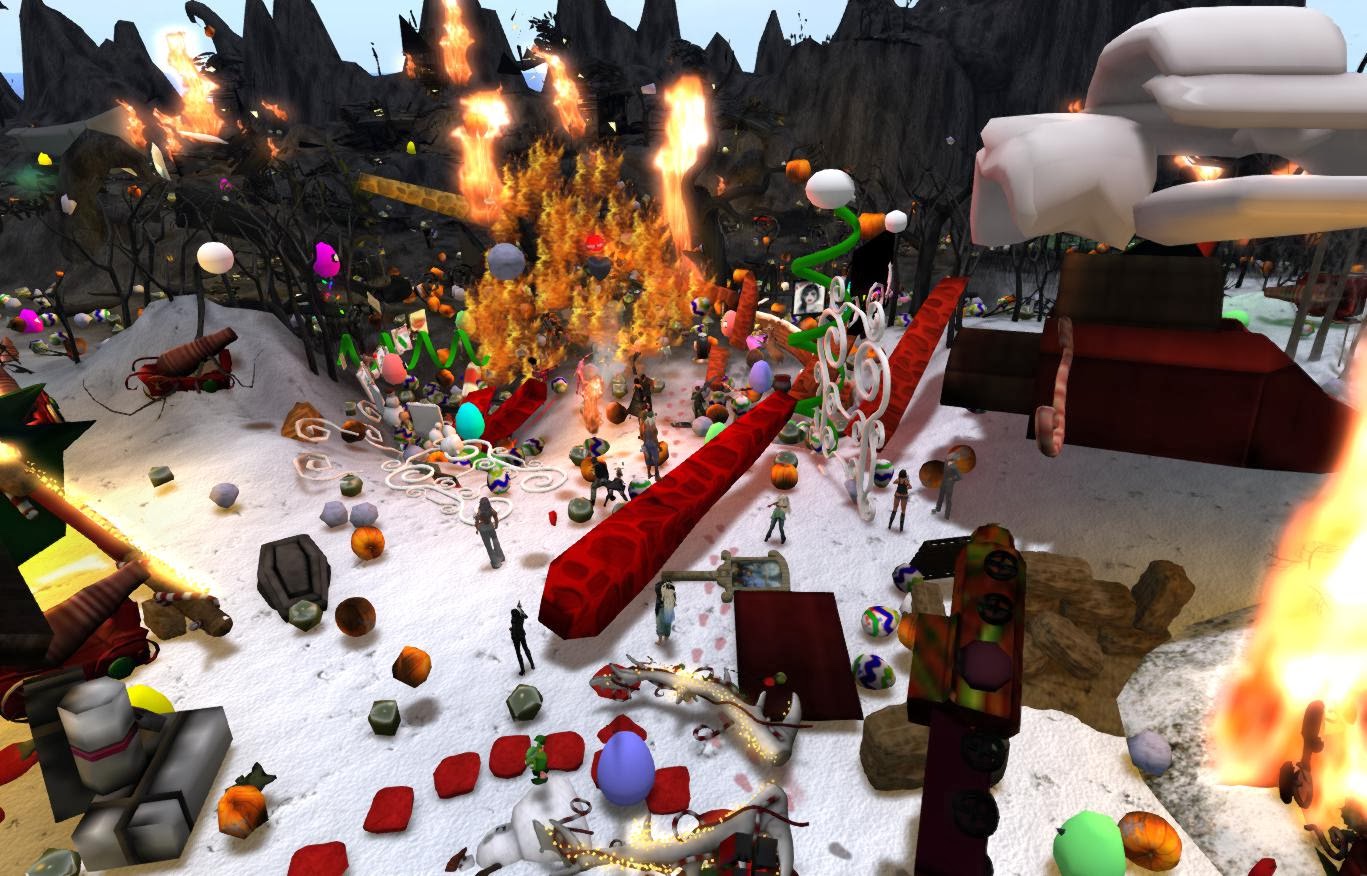 It's a scene of near complete and utter destruction, what's left of the dance area littered with sections of wall, in addition to eggs and peas, and other debris. To add to the comically apocalyptic nature of the event, there were "zombie peas" that would bite people if they got close. 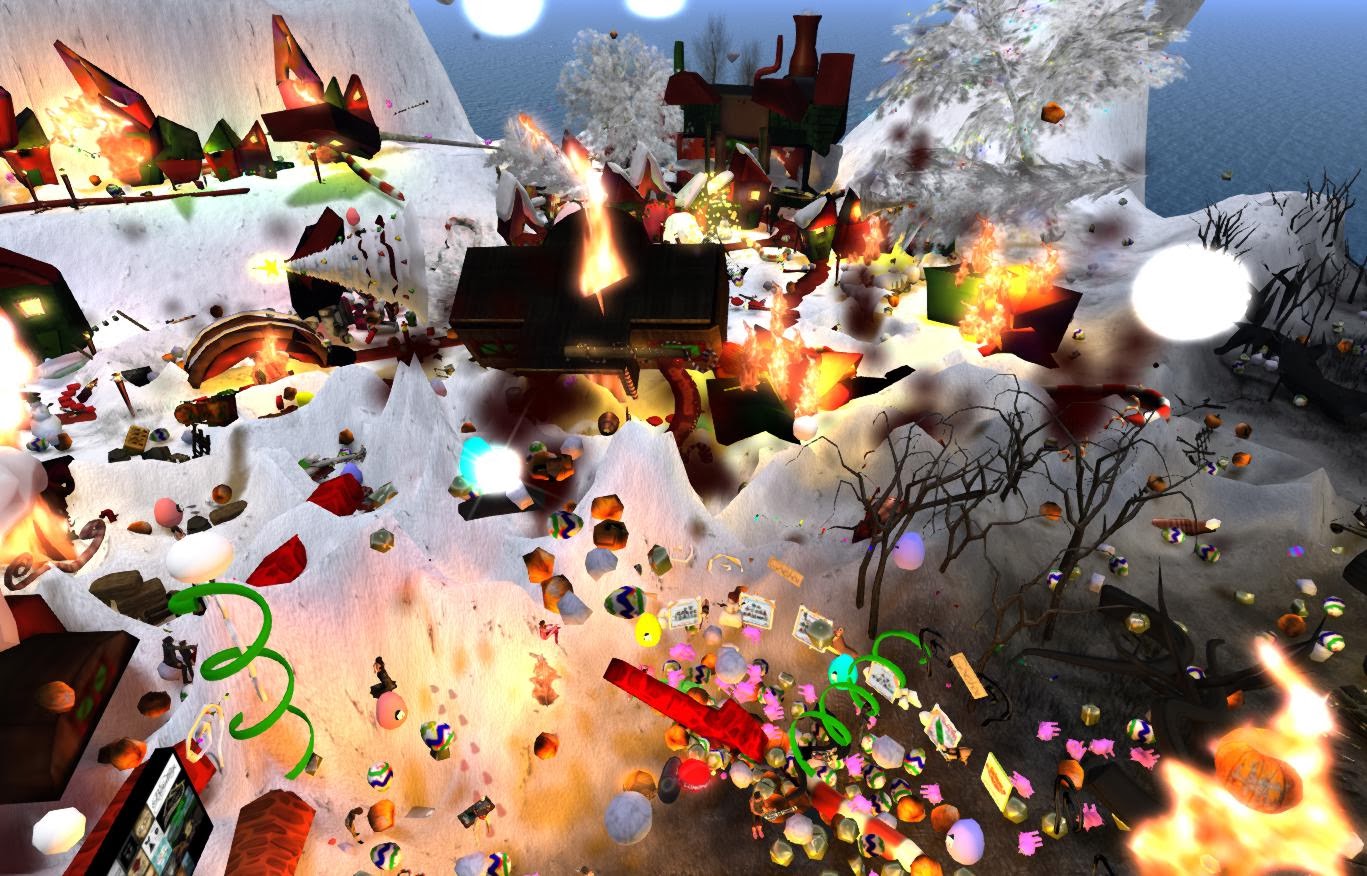 From further away from the dance floor, buildings were welling up and flying through the air. 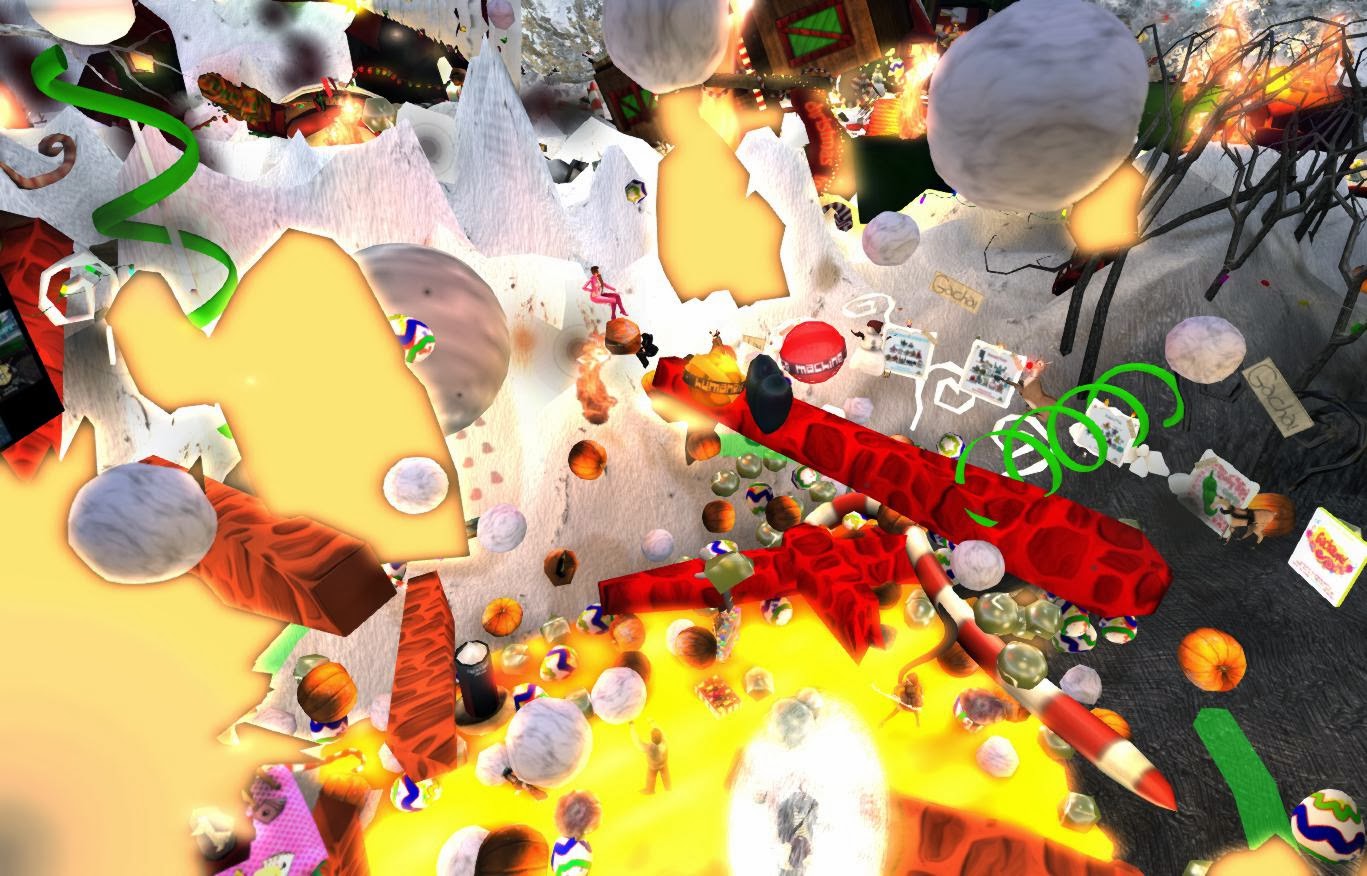 This was the last picture I took of the destroyed Holiday Havoc before everyone found themselves ejected from the region. The destruction was complete, and so the event was over, and the sims were closed so the staff could clean up.

And so the Blow Up party was over. The Madpeas had ended their monthlong build and event truly with a bang, or rather a series of explosions and quakes.