In real life, the Winter Games don't start until February 7th in Sochi Russia. In Second Life last weekend, residents from several Steampunk communities (and friends of) got together for their own winter activities, the Wulfenback 2014 Winter games. The events took place over a the weekend of Saturday January 25 and Sunday January 26, and across several sims across the Steamlands over multiple communities. The events got their name from prominent Steelhead resident KlausWulfenbach Outlander. 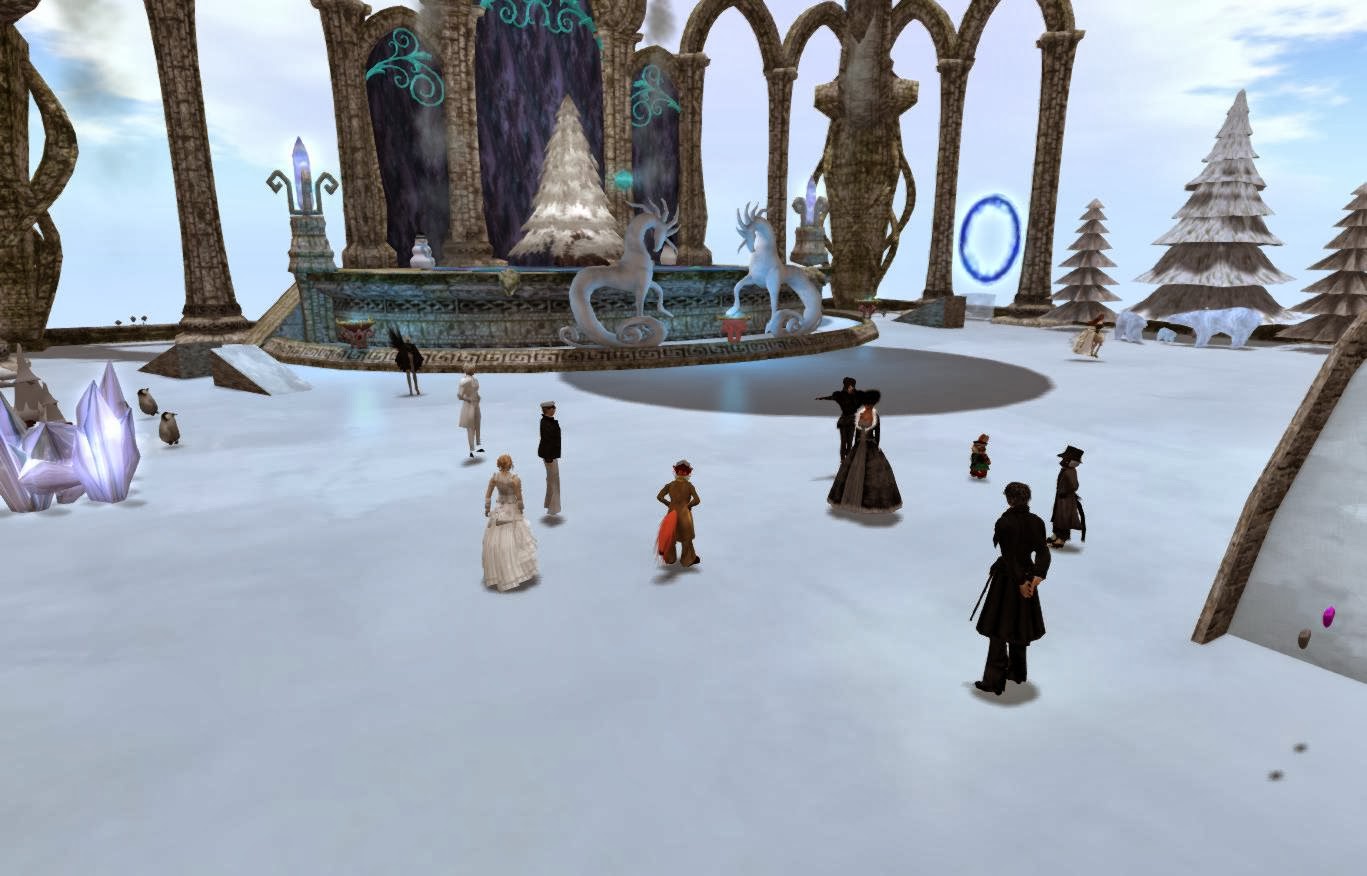 The Consulate of Europa Wulfenbach 2014 Winter Games as the events were officially called started off at 11AM SL time at the Dragon Amphitheater in Caledon On Sea (161/35/3076). At over 3000 in altitude, the location was all iced and wintered up, with the only dragons around being stone statues. Indeed there were more penguins at the place, which were skittering around on the ice, with other decorative items such as snowglobes. For those wishing to skate on the ice, all they had to do was click on the stage and get a pair of Wulfenbach skates (and disable any AOs active). Cups of hot coco were also available.

The stage itself had a white Christmas tree in the center back.On the brick floor was a large blue disk for a dance area, with decorative patterns. With music provided by Nyree Rain, people were soon, taking off their skates, and coming over to dance. The event lasted for about ninety minutes, though some people stuck around to chat for a little while before heading to the next event. 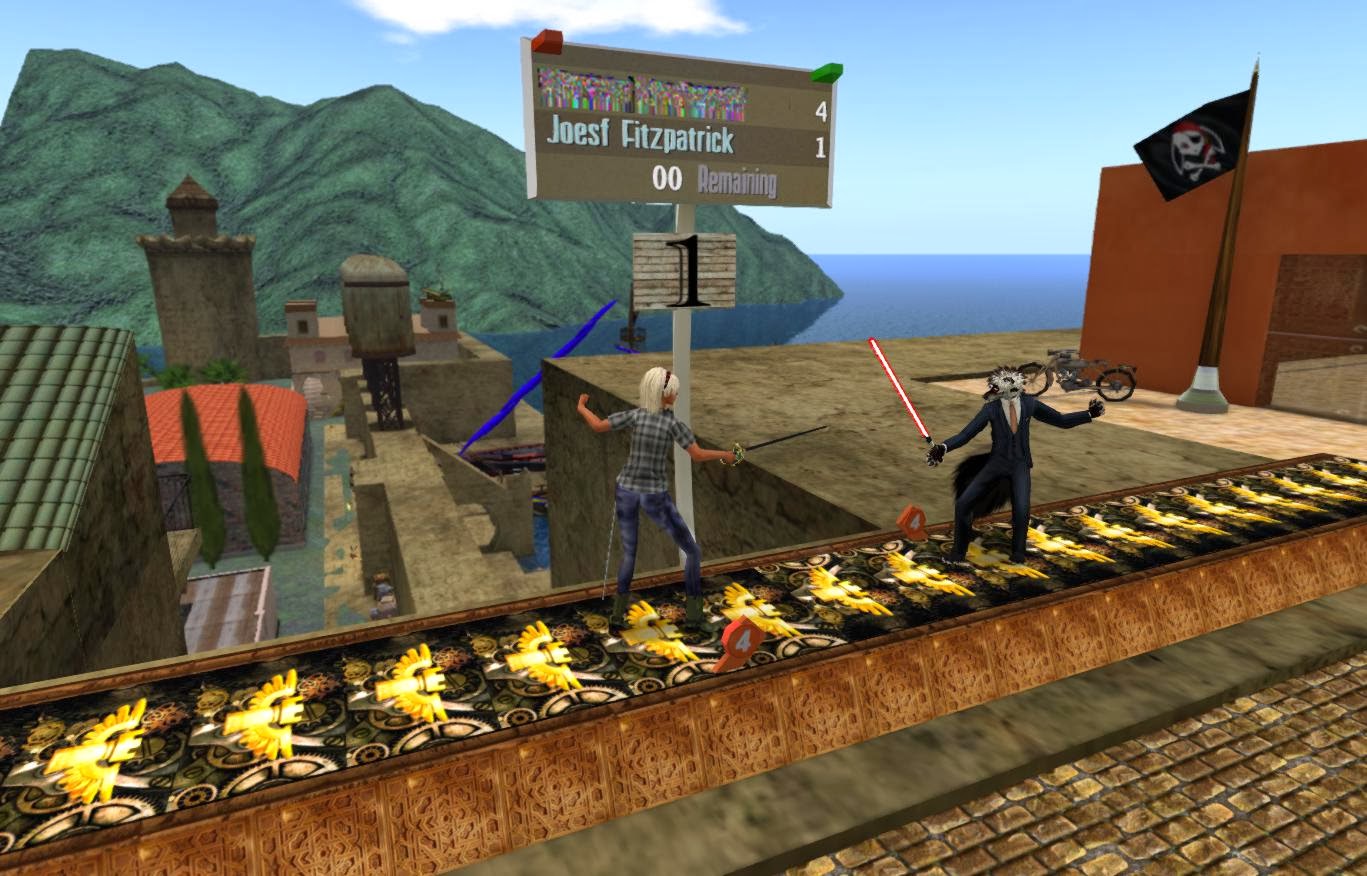 At 1PM SL time was the fencing match, the "United En Garde Tournament" at MariKesh Mondrago (75/199/47) (for those who want to know more about the game, Click Here). After paying an entrance fee, thirty-two contestants participated in the event, taking place over three rounds plus the rounds to determine the winner and third place. Some fast and furious swordplay was done, with no shortage of short matches.

The match for first place was Stormy Lionheart and Joesf Fitzpatrick for the championship. It was a bit of a contrast, Stormy being a girl in blue jeans and Joesf a dapper-dressed fur in a good suit. But feminine wiles won out over fashion, and Stormy won. The third place round between Zac Icthan and Vance Nirvana was an even greater contrast with Zac being a two foot tall hippo tiny. But in En Garde, size does not matter. The tiny hippo scored, and won third place.

at 4PM SLtime, was an intermission event, "Queen Anne's Chess." This wasn't a tournament event, so no prizes were given, but there was still some competition. Queen Anne's Chess Club, at Winterfell Laudanum (127/210/517), has a number of games, including a billiards table, a Japanese dice game called Chou-Han, a Risk-like game called "Conquer," and of course chess. The location is open 24/7 for anyone to drop by and play. 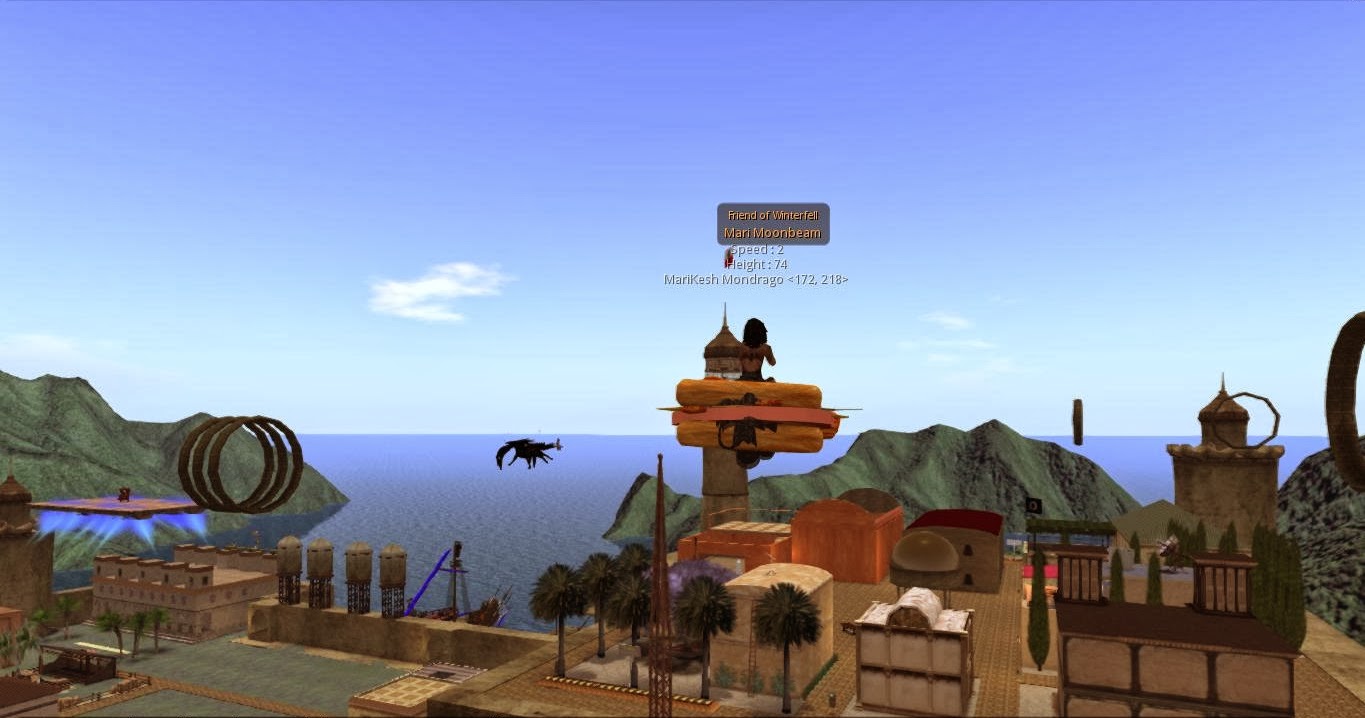 At 5:30 PM was the "Steamcarpet Steeplechase," hosted by Lucien Brentano at MariKesh Mondrago (63/206/48). Actually, there was only one steamcarpet in the event. Most others chose some other vehicle from a flying giant BLT sandwich, to Baron Wulfenbach's helicopter pack, to Avariel Falcon's flying unicorn avatar, to a giant housefly. The flying sandwich got a few jokes in the crowd about "bringing home the bacon" and "airline food," and the giant housefly sparked some humoring about "that would take one heck of a swatter" and "you want flies with that?" The race took part across a course in the air made up of rings. Satu Moreau proved the fastest, and got first place. Second was Avariel Falcon. Third place went to Baron Wulfenbach himself. 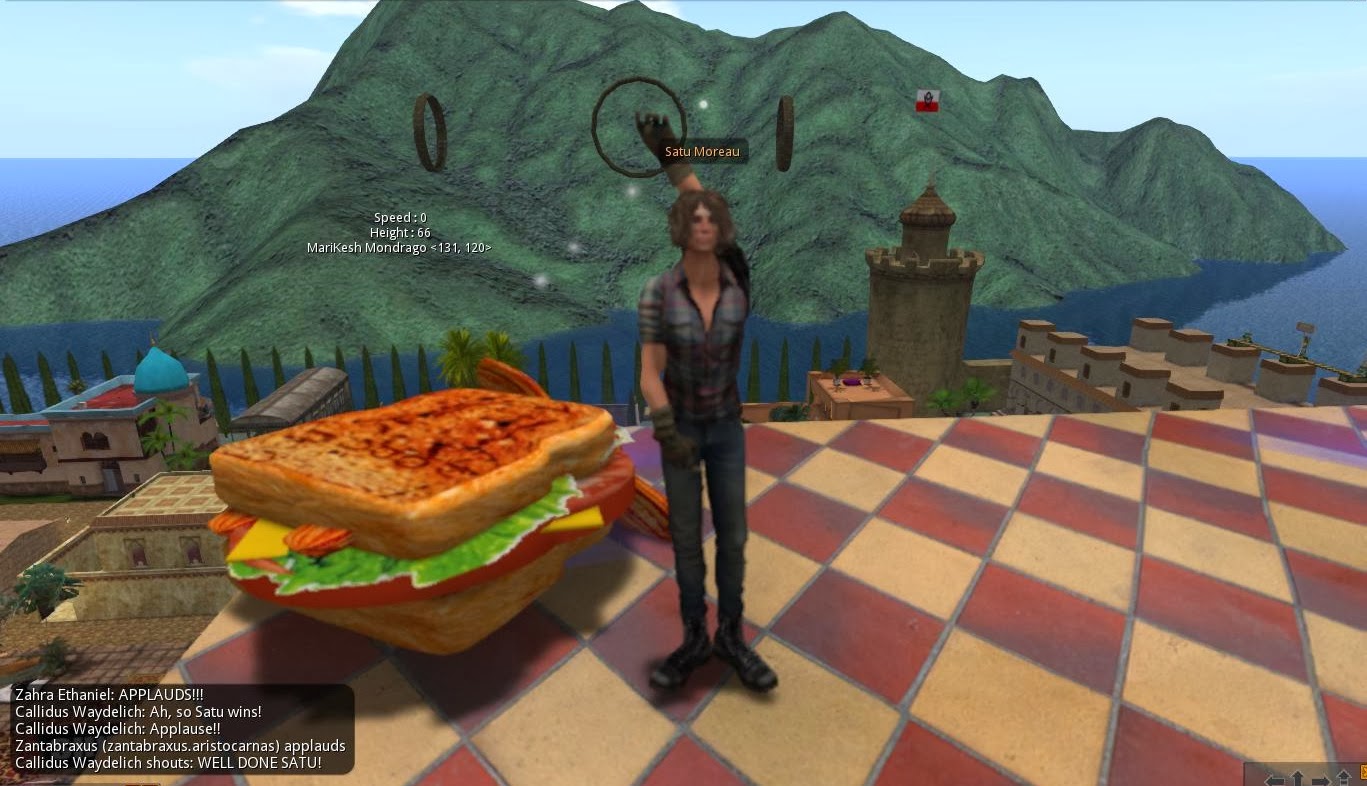 The Steeplechase was the last of the Saturday events. Sunday January 26 would see a few more. At 11AM SL time was a fishing event in Caledon Kittiwickshire (71/236/24), "Hats may be involved." There was also a "Scupper of Coffee Race" at the Babbage Square sim, "The Experimental High-Test Coffee Race, newly added this season, will test your mettle in a foot race designed to demonstrate the energy-producing effects of a good, hot, steaming and perfectly safe cup of uber-coffee! Unlimited amounts of coffee will be provided along with additional equipment absolutely without charge!" Sadly, the Newser was not available to cover these events when they took place. 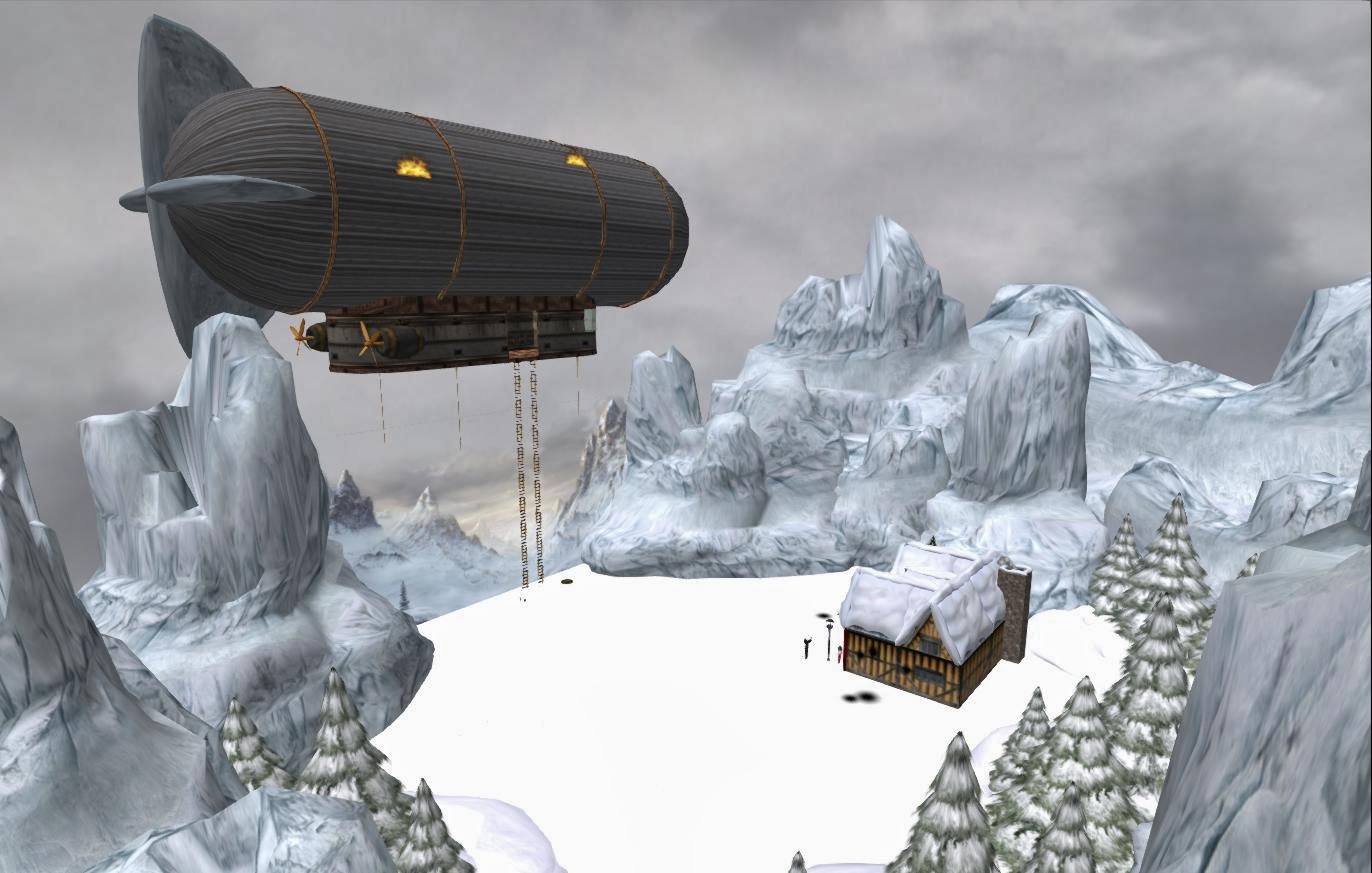 The final game event was the Monster Hunt, taking place at Steelhead St Helens from 5PM SL time to 7PM. The event was described as, "The North Pole has come under attack! We have received word from surviving members of Santa's elven ranger squad that otherworldly forces have invaded and taken over Santa's workshop, seeding the surrounding area with hideous monsters and vile mutations to keep away prying eyes. These villains are now using Santa's factory and manufacturing capabilities to create death machines to leave under trees and in stockings for children all over the world come Christmas next year. ... Your mission, should you choose to accept it, is to join us on the WEA Gummi-Ente where you shall receive equipment and basic training, and then be air-dropped as close to Santa's workshop as we are able, fight your way past the savage beasts that patrol, find the entrance to the main factory, find the ones responsible for this invasion, and in the spirit of Christmas, destroy them utterly and without mercy!" 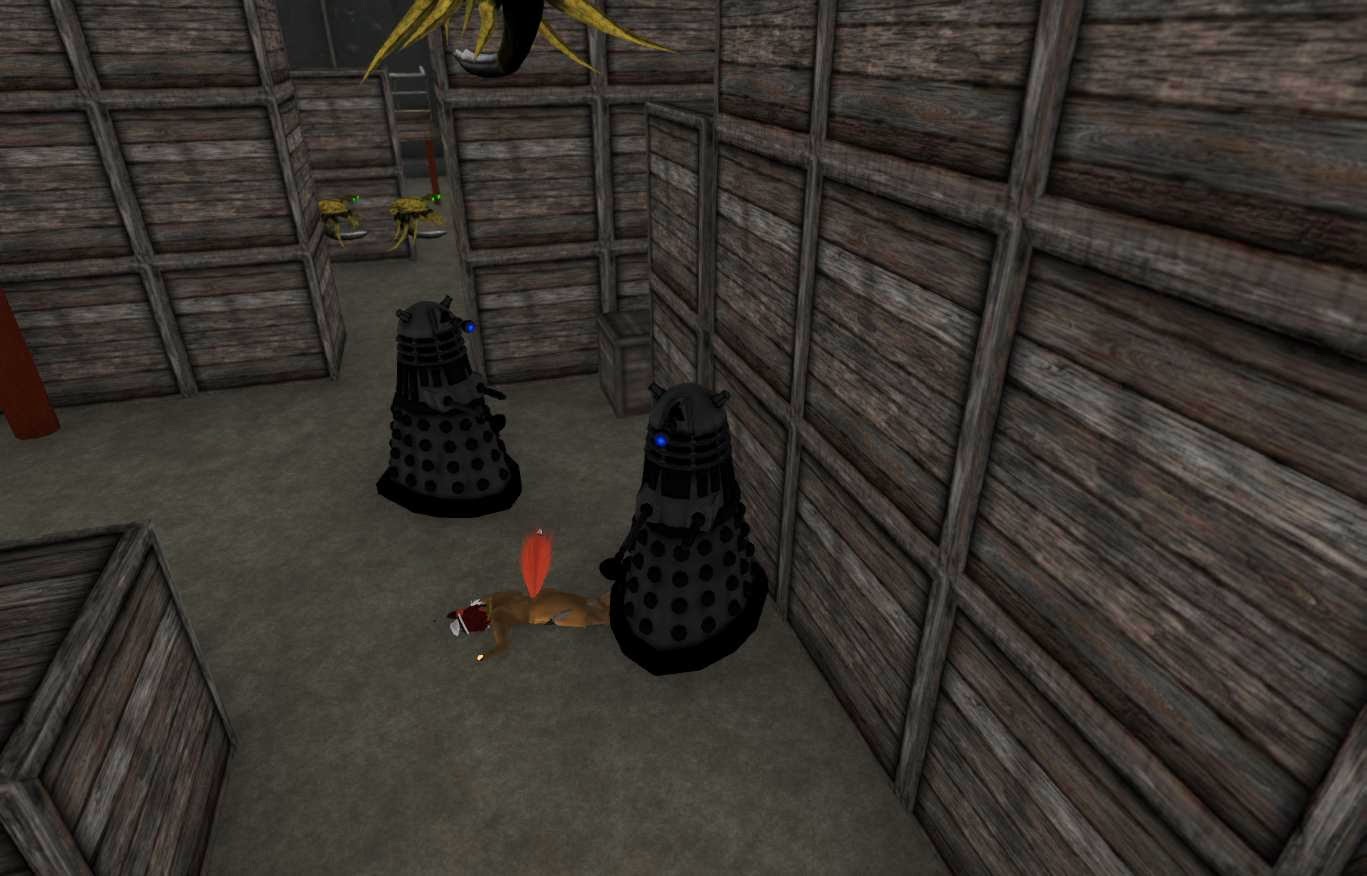 The event was done using HUDs for the Grim Combat System, which I've seen in a few zombie games. Free crossbows and guns were available for the event, along with red berrets provided with "the blessing of the Queen Victoria of England." More than a dozen gathered to take part in the hunt, including Baron Wulfenback. Yours truly also took a gun for the fight. At the event's start, we jumped down, and mean-looking "tainted snowmen" began appearing, along with alien "three-legged freaks" and floating aliens, and closed in. We fired back, and began taking down these nasties. There were a few "clanks," steampunk robots, near the drop zone to fire at any monsters that came too close, so there was a safe zone. 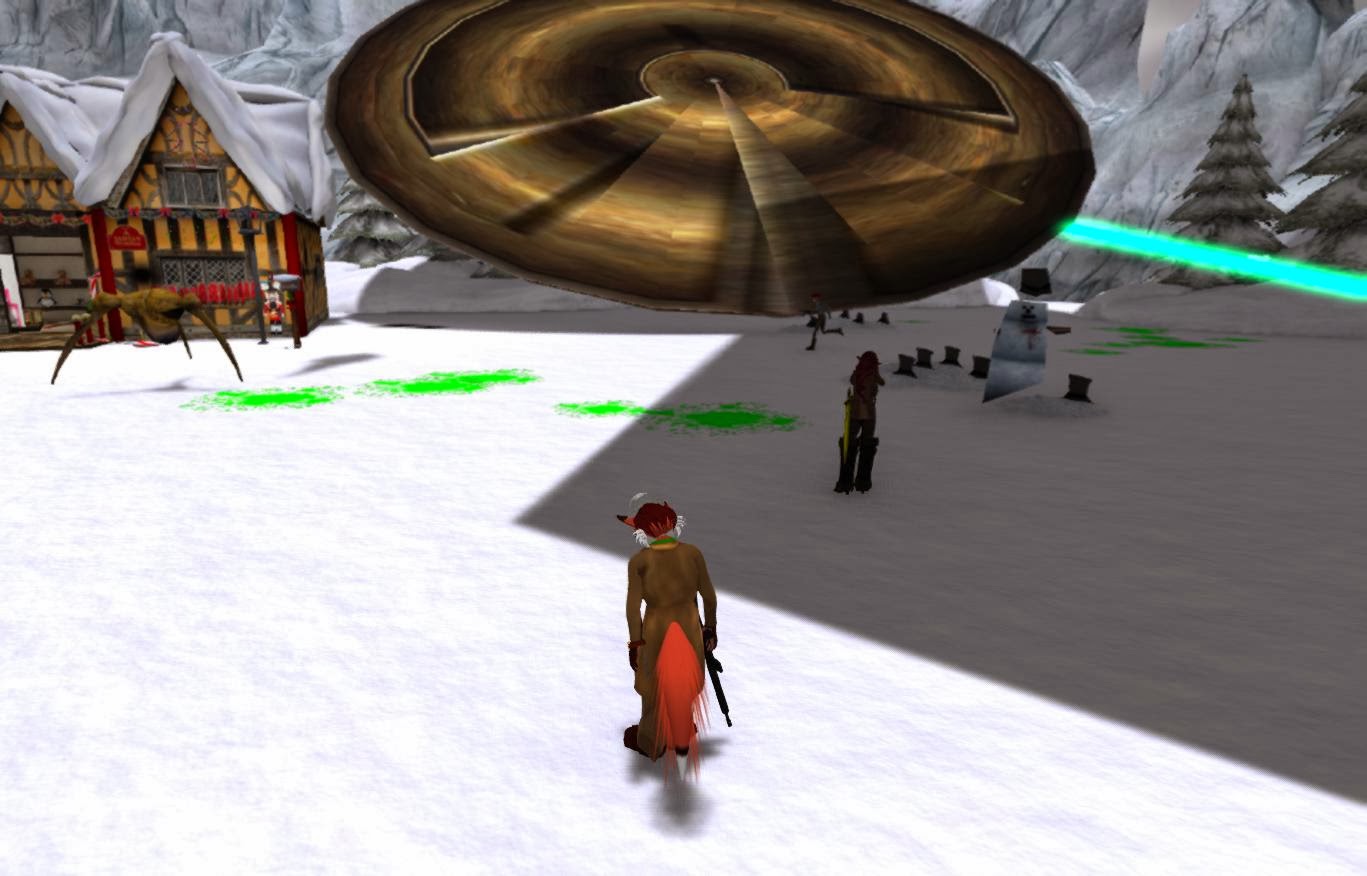 After clearing out the space between the ship and Santa's workshop, some of us went in, went down a hole, and entered some kind of subterranian base with robot drones, aliens, and even the nemisis of Doctor Who, the Daleks, around every corner. It was a hard fight, and many of us ran out of hitpoints and had to be ported back to the ship, or if the port didn't work, wait for the HUD to recover before we could shoot again. Zanya Resident provided some commentary during the shootout, "Tha Baron is cornered but fights his way through a wall of Daleks and drones!" "Bix is making slush out of the snowmen!"

Finally, there was a big boom, and with a clatter, metal saucer-shapped objects could be seeing crashing to the ground. Zanya shouted, "OH MY GOD! The Dalek ship has been destroyed!!!"

Finally, the time for the shootout was over, "Everyone back to the ship."  "Shoot. I was hoping to reach 1000." Scores were tallied, "In first place, we have Luke Skywookam (Luke Skywalker aka maxim.krutschek ), with an unbelievable 914 kills! In second place, we have Tal'Kesh (aka Way) with an amazing 665 kills! And in third we have Baron Klaus Wulfenbach with a hefty 440 kills!" Zanya commented, "special recognition should to to Tal, though I don't have an exact number, I would bet solid money he thinned the Dalek population down more than everyone else! ... it seems the Daleks took massive casualties, we kept intercepting them screaming about a doctor. Then the ship exploded." Zanya Resident reactivated the place after the games were over for anyone else wanting to play. The location is at Steelhead St Helens (109/218/886).

The final event was the closing ball. This would be at  St John Parish. Unfortunetly, yours truly was not able to attend due to real life matters.

It was an eventful Winter Games, the seventh organized event of it's kind in the Steamlands. No doubt next year there will be an eighth.