From 12 Midnight early Friday morning August 1 to 10AM Sunday morning August 3, the "Jamm for Genes" event took place at "The Pocket." Except for a few hours on Friday afternoon, a series of musicians performed live on the Australian club's stage, one taking over right after the other signed off. The event was run by club owner and singer OhMy Kidd. 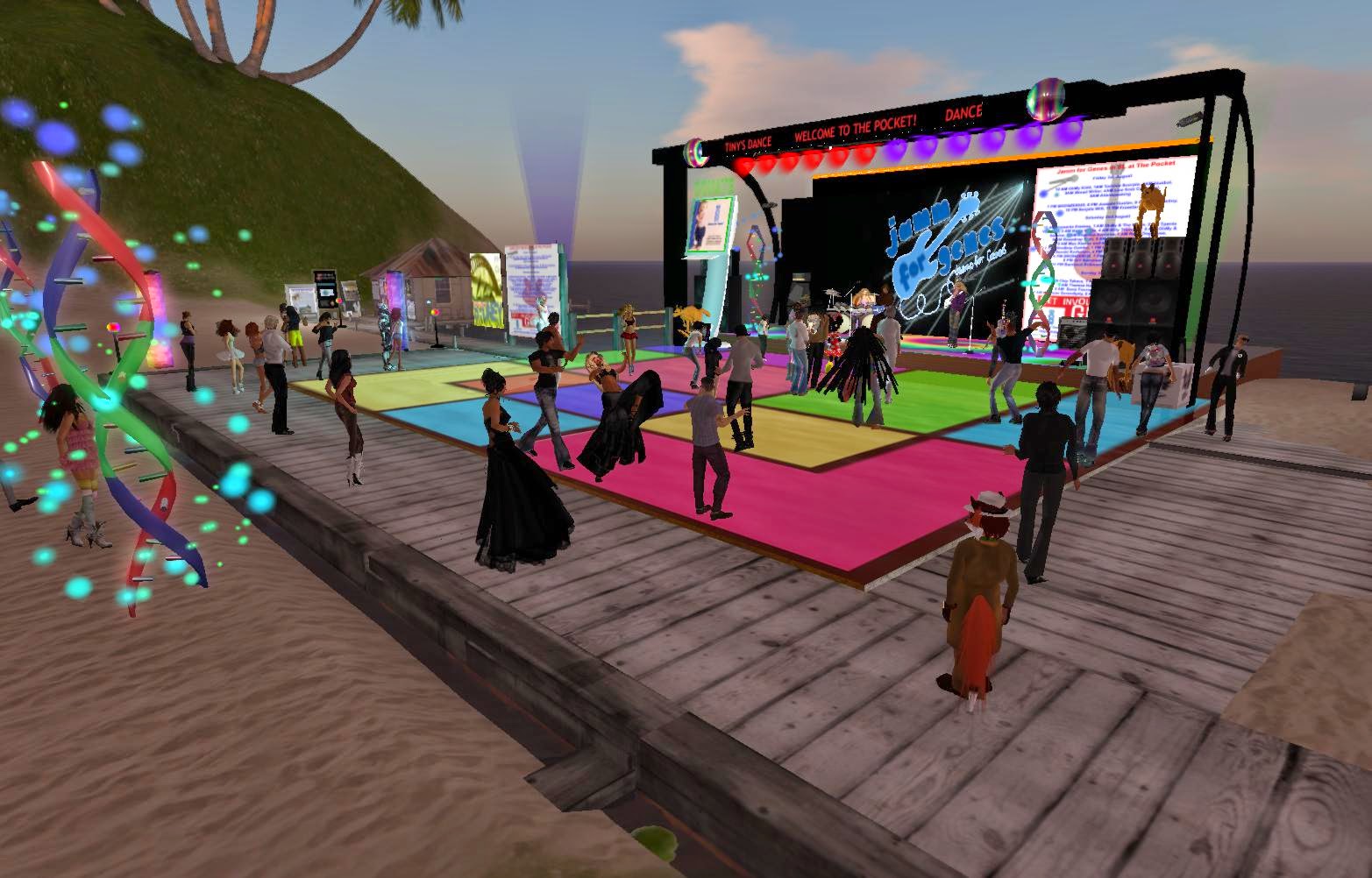 "Jamm for Genes" has been taking place every year in Second Life for several years. The event raises funds for the "Jeans for Genes" fundraiser by the Children's Medical Research Institute in Australia. In some previous events, other Australian clubs took part in the Jamm. But OhMy recently announced "The Pocket" would be temporarily closing after the fundraiser. This may have gotten others involved to let his club stand alone in the spotlight. OhMy had the help of Cellandra Zon and Bundy Scorpio (Bundy Xue), thanking those putting Lindens in the kiosk, "Thank you for your gene-erous donation." And explained those dropping in what the event was about, "Thank you for supporting Jamm for Genes.  With your help, the Children's Medical Research Institute can continue to unlock the mysteries of genetic disorders such as birth defects, cancer, and epilepsy.  You are helping to make miracles." People were invited to take some free t-shirts of the event from a box near the stage. 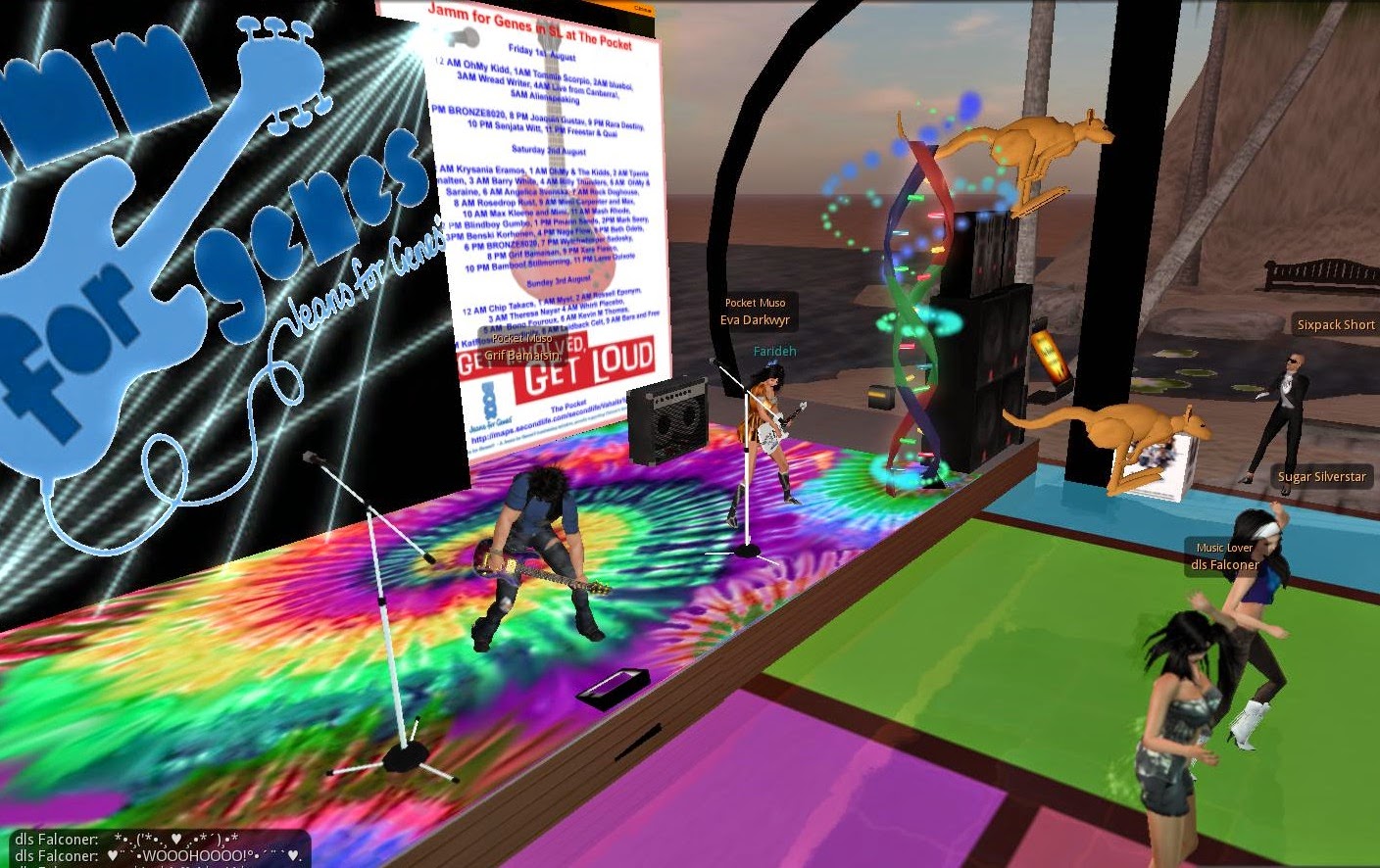 OhMy Kidd started things off with the first live music event. Following him were many more live musicans, such as Rosedrop Rust, Max Kleene, Beth Odets, and many more. Avatars of all kinds dropped by to dance, or just to listen. And the donations continued to come in as well. Occasionally there were some jokes and general funnery. One musician's microphone and cord was mistaken for a whip, which got a couple crack comments. At one point, a kangaroo av was hopping around to the chuckles of the Australians. 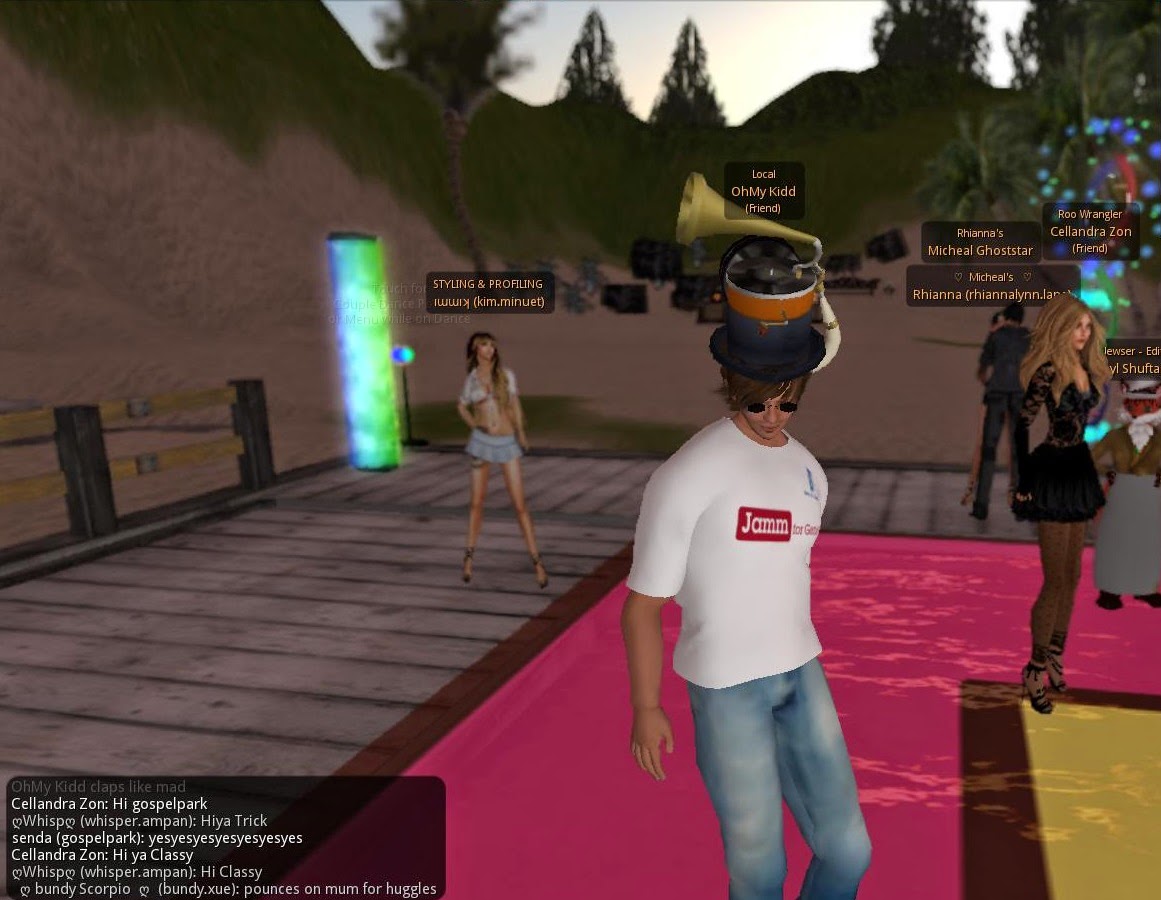 The event went on all day Saturday, Saturday night, and early Sunday morning. Finally as Bara Jonson and Free Balan finished up their event at 10AM, the total donated was 666,000 Lindens, which in a few minutes was raised to 667,000. The event's organizers hugged one another in celebration. Cellandra cheerfully told me , "It's been a fun event and Everyone has been so very generous.

It was late in Australia, and people whom weren't heading elsewhere were retiring to bed, Bundy saying, "Ok time for some much earned sleep, will pick my stuff up tomorrow when get up." I asked OhMy Kidd if he had anything to say. He answered, "Thanks everyone, especially all the musicians, and especially Bundy! I'm very grateful for the generosity of Second Life musicians and music lovers." So what were his plans now? "I am going to sleeep for 10 hours!  And I can say one thing for sure - Jamm for Genes in SL wil be back next year!"

And with that, OhMy Kidd went his way, and the 2014 Jamm for Genes was over.