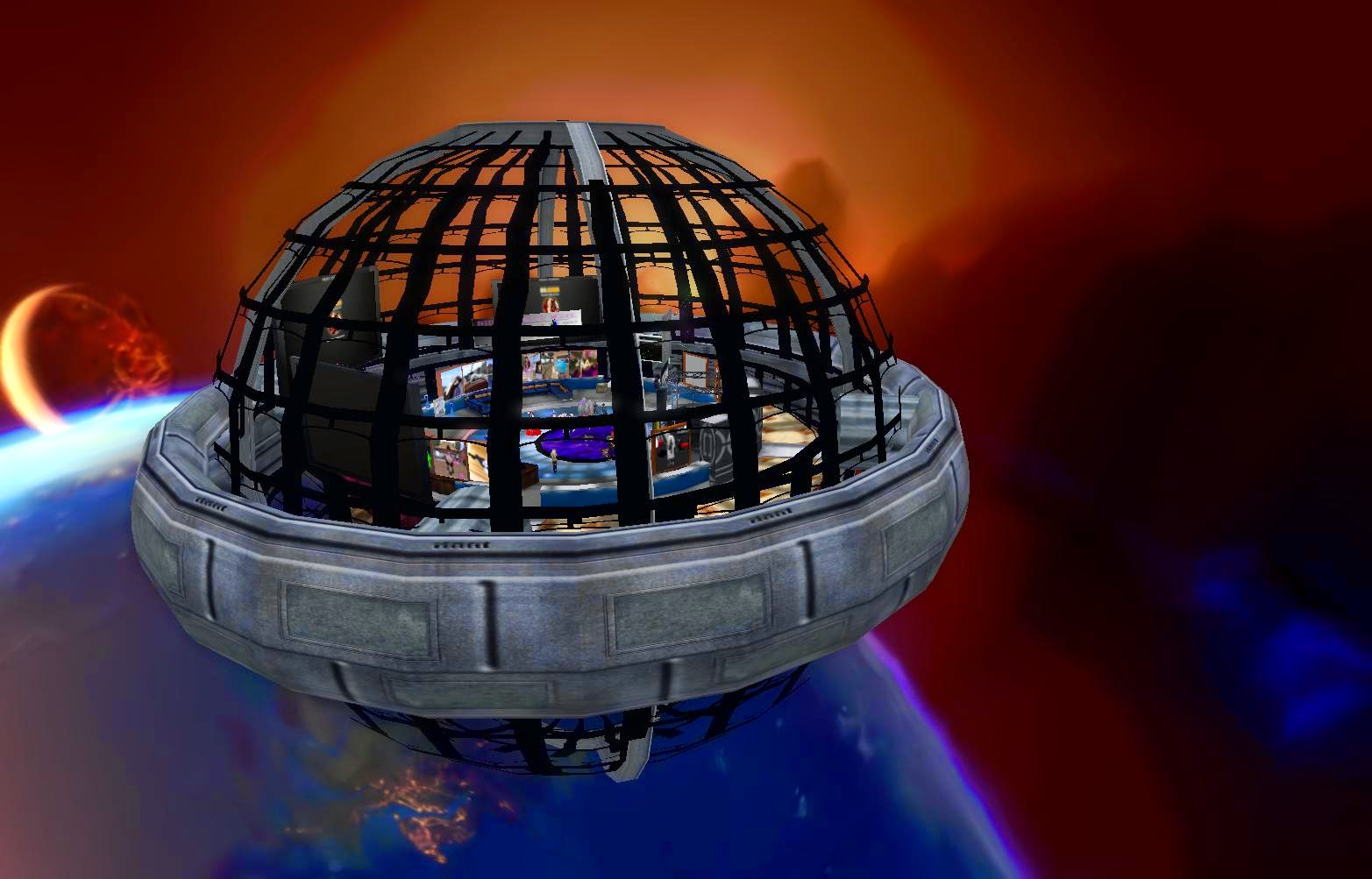 It was on May 31st 2010 that it was announced Club Zero Gravity had reopened in the Purrfection Estates sim. More then four years later on August 14, 2014, the club held it's final party there. 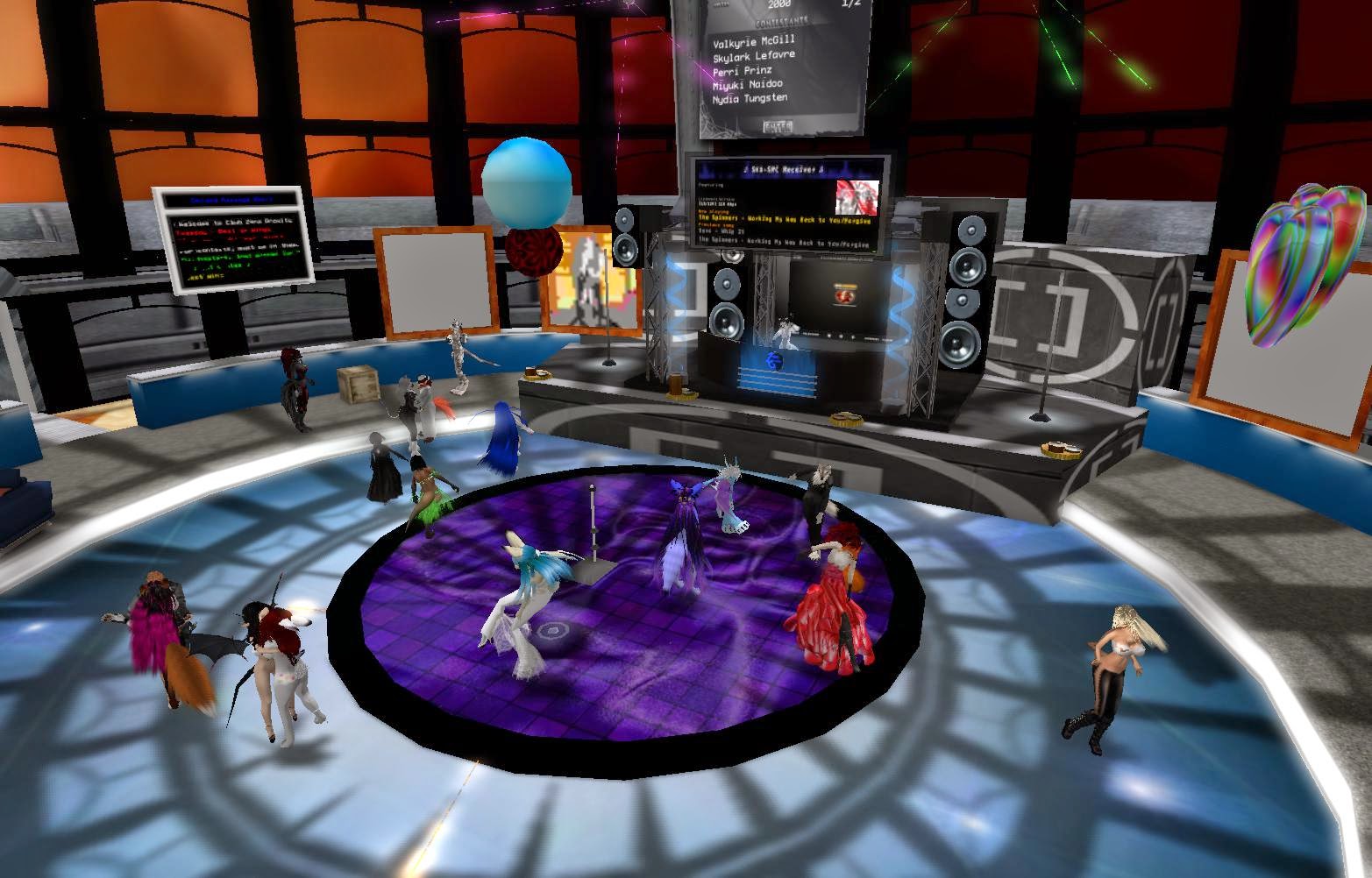 After over four years of being in orbit over Purrfection, Club Zero Gravity is closing it's doors. But rather than mourn, we chose to hold one last bash, the "Last Call." The contest theme is "come as you are." We at the "Party among the stars" wish to thank you for being with us for the long journey, and it is now time to say goodbye. 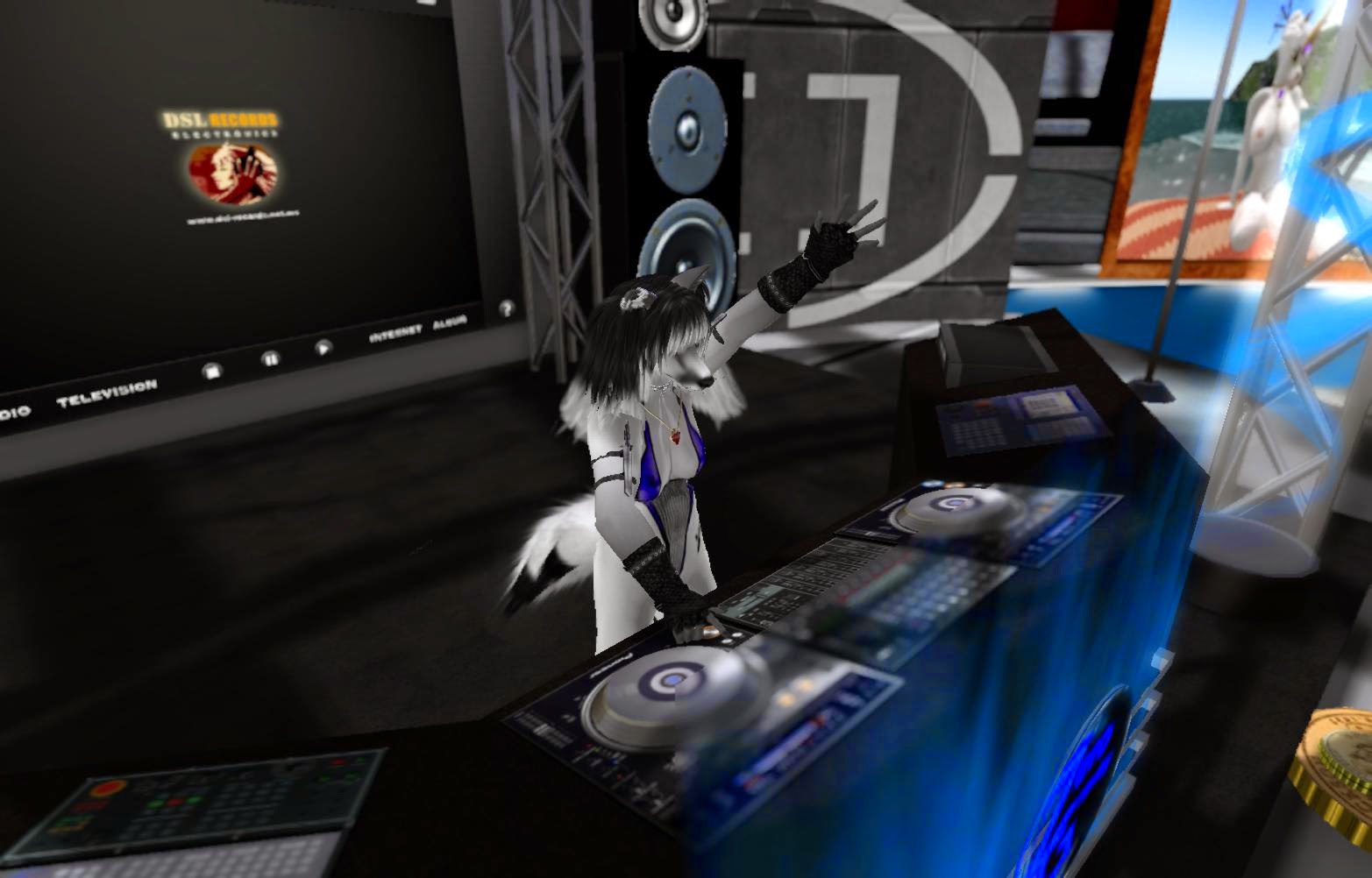 Nydia Tungsten, the owner of Club Zero Gravity and the Purrfection sim, took to the DJ booth herself for this final part. She had gotten her start as DJ "Naughty Nydia," and her selection of tunes went from popular classics to comical to cheeky and riskee. 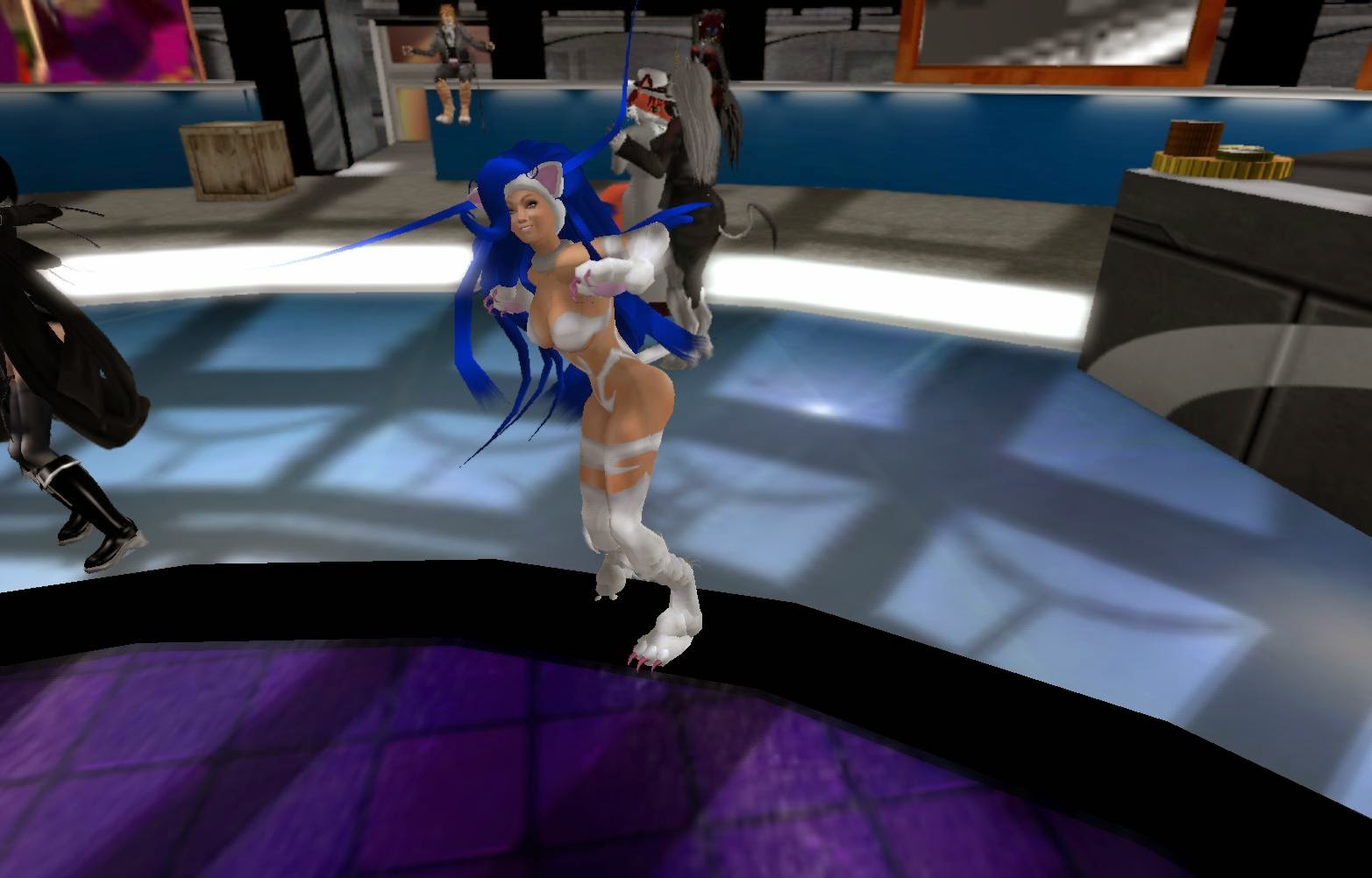 Miyuki Naidoo, the hostess of the club, changed to her popular but seldom-seen Felicia avatar. 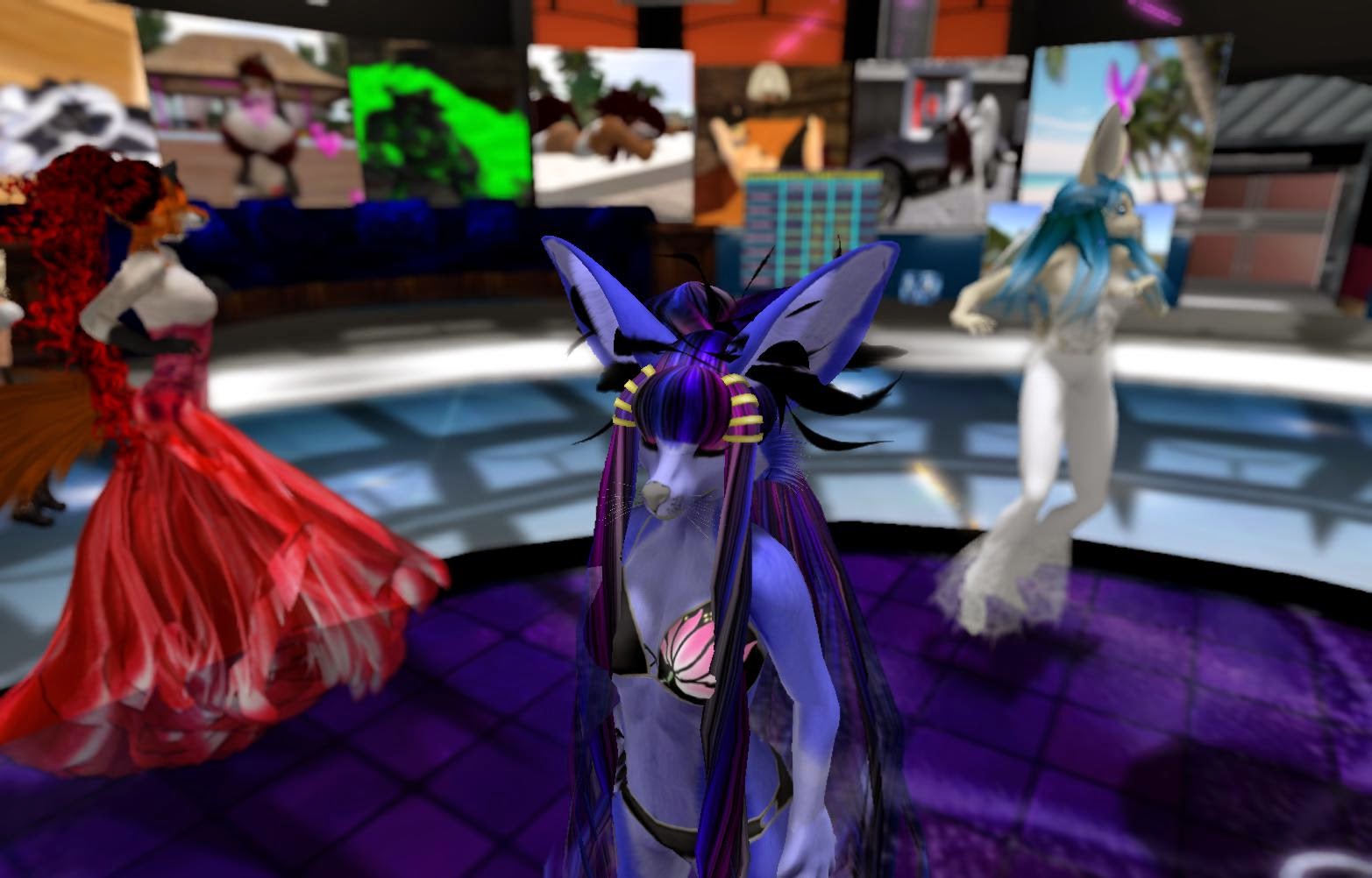 Many people attended this last party, a few whom came back to Second Life after a hiatus for this occasion. Two showed up for the first time, saying they were sorry they were not here for earlier events. A couple would later tell me they would have come if it wasn't for events in real life. 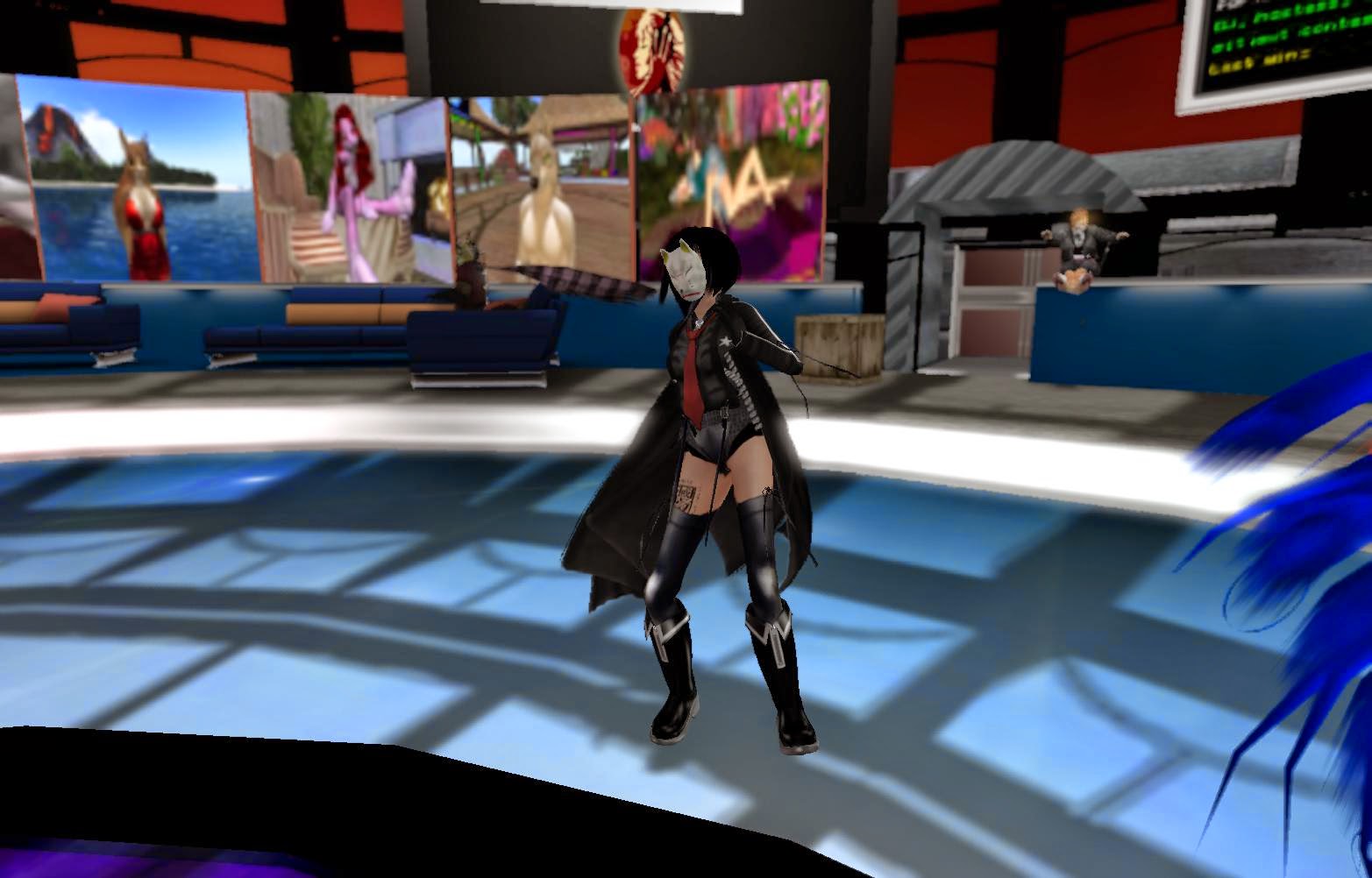 Club Zero Gravity was created in 2007 in the Pockwock sim in the early days of the Sunweaver community, built by Shockwave Yarreach. Shockwave would say that night there was only a limited amount of space available for the club, so he put dance balls on the wall and ceiling, which quickly led to the name. 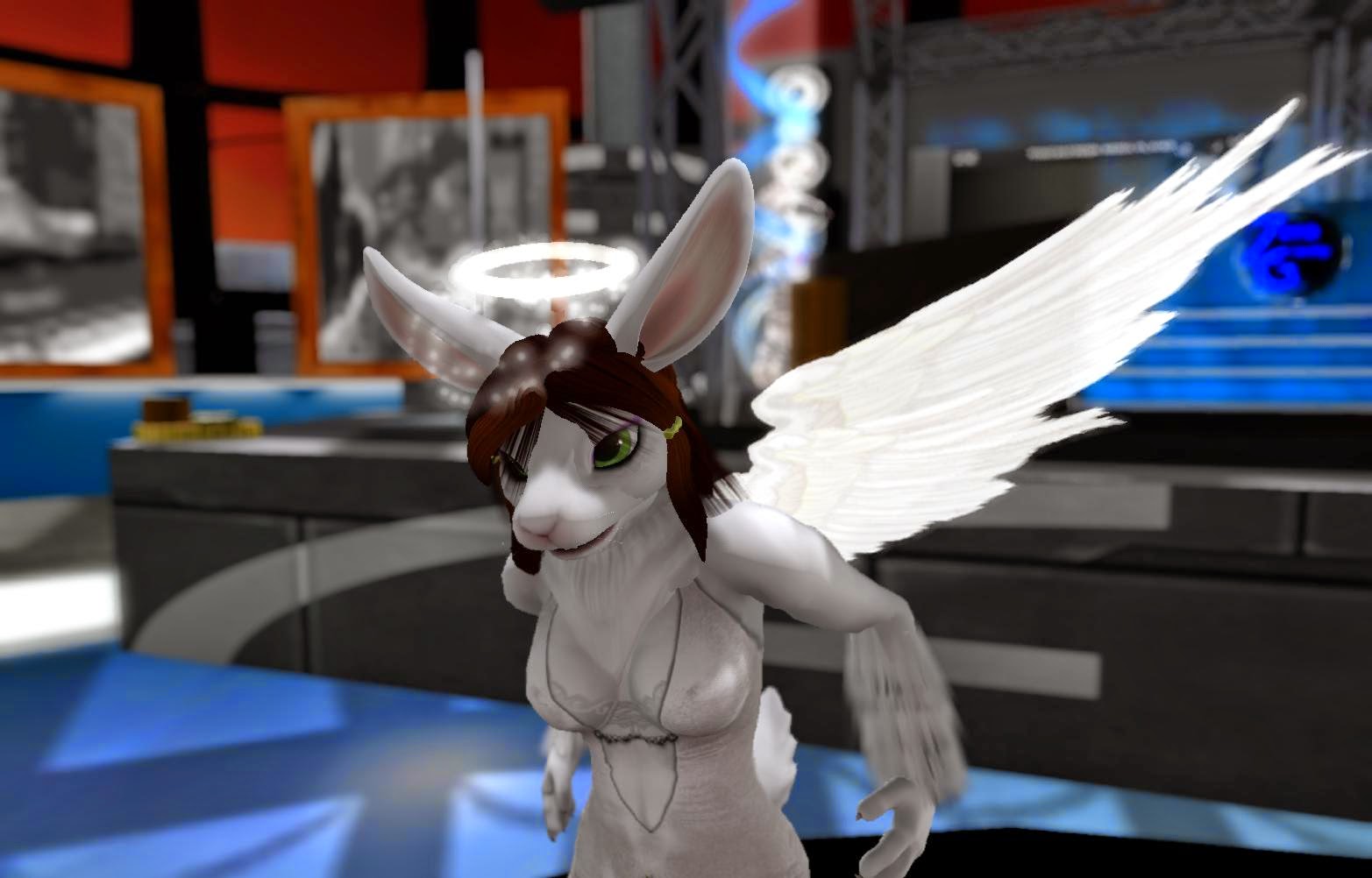 The club would later move with the community to the Sunweaver Estates, going through two more reconstructions, a "borg cube" look, and later the blue and steel space station look by Ranchan Weidman that many feel was it's best look.  It was closed in 2009, to be reopened in Purrfection several months later. 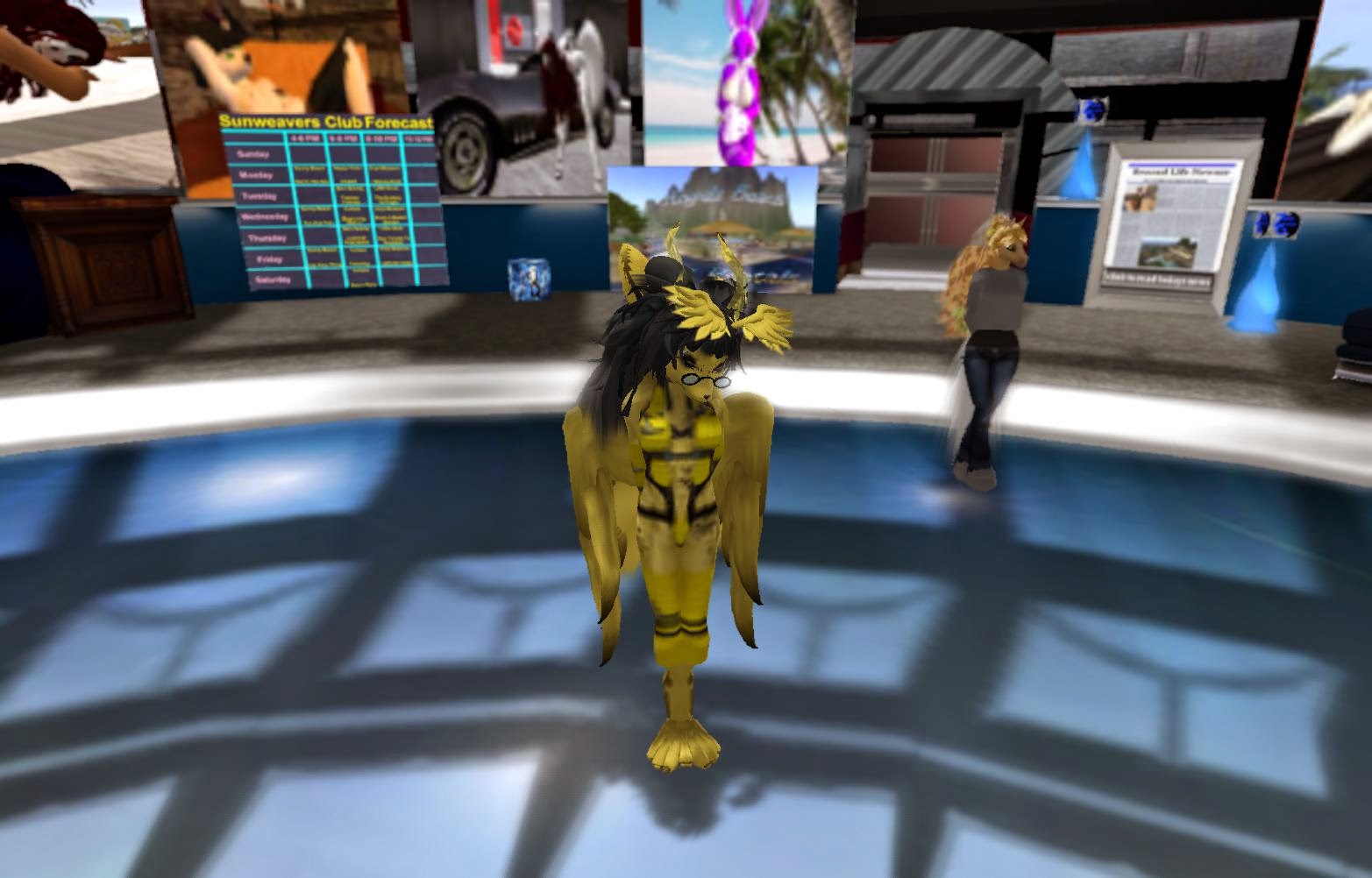 The crowd was sad to see the club go, but was determined to have a good time. People reacted to Nydia's friskier tunes by cracking dirty jokes. And talked about various happenings in Second Life. 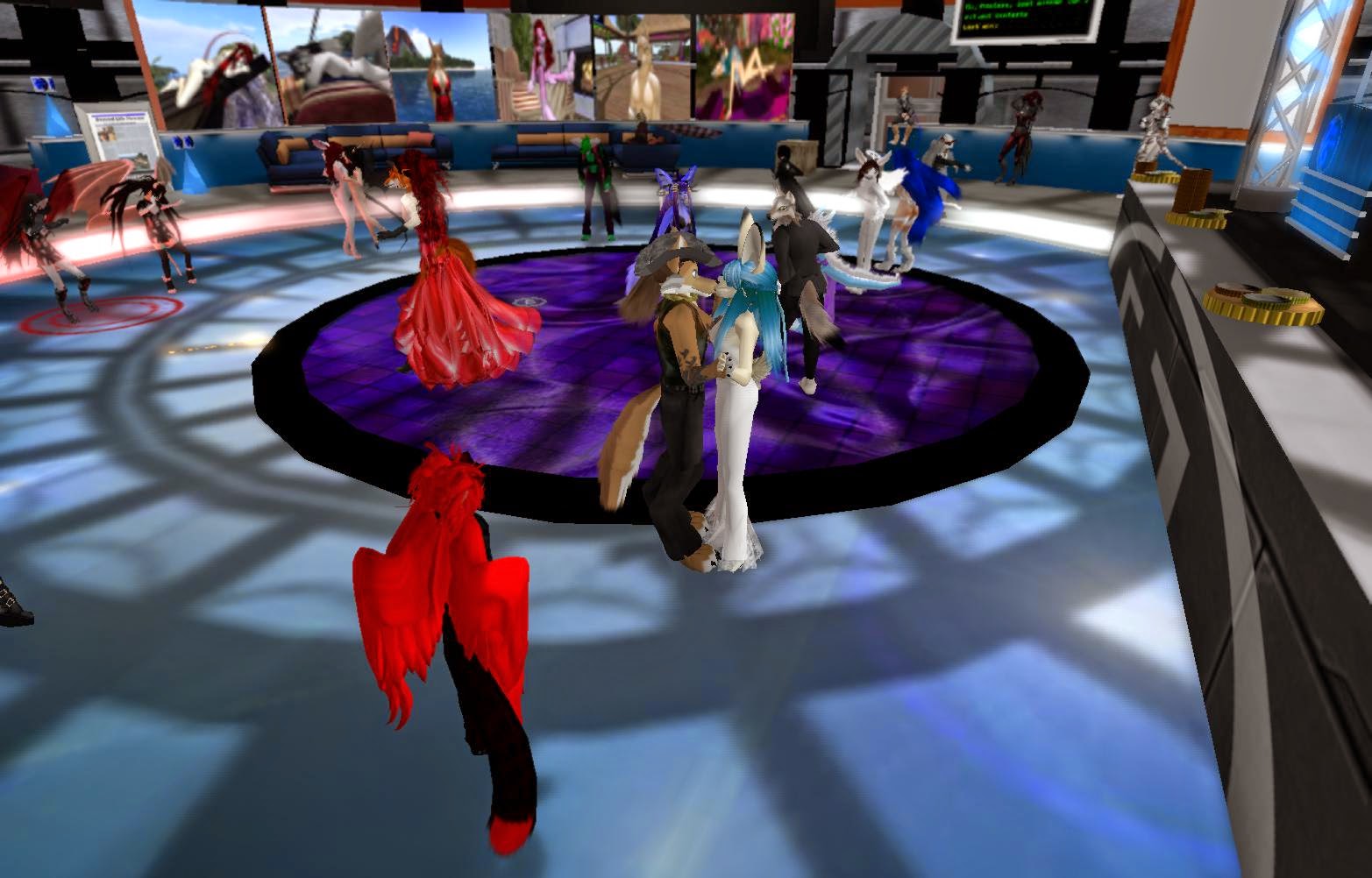 There was a 2000 Linden prize up for grabs that night. But as Nydia invited the staff to enter for it as well, she was talked into putting her name on the board as well. When the voting was closed and the results announced, she ended up with the most votes. She reacted with surprise, then a humble bow. 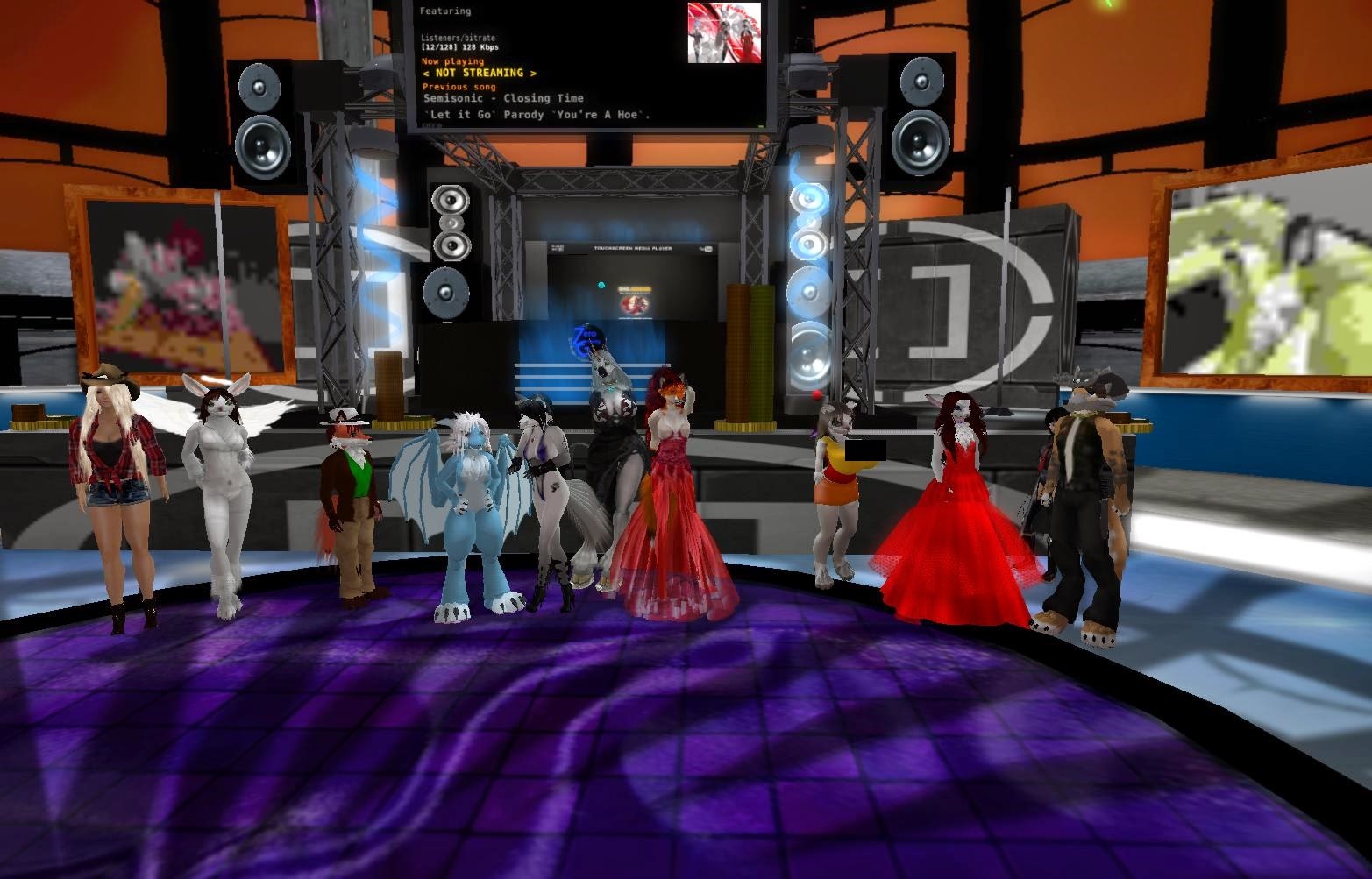 After the official end up the party, some hung around for a little while, posing for a few pictures. One lady, whom lives at Purrfection, asked friends not to stop coming to the sim. 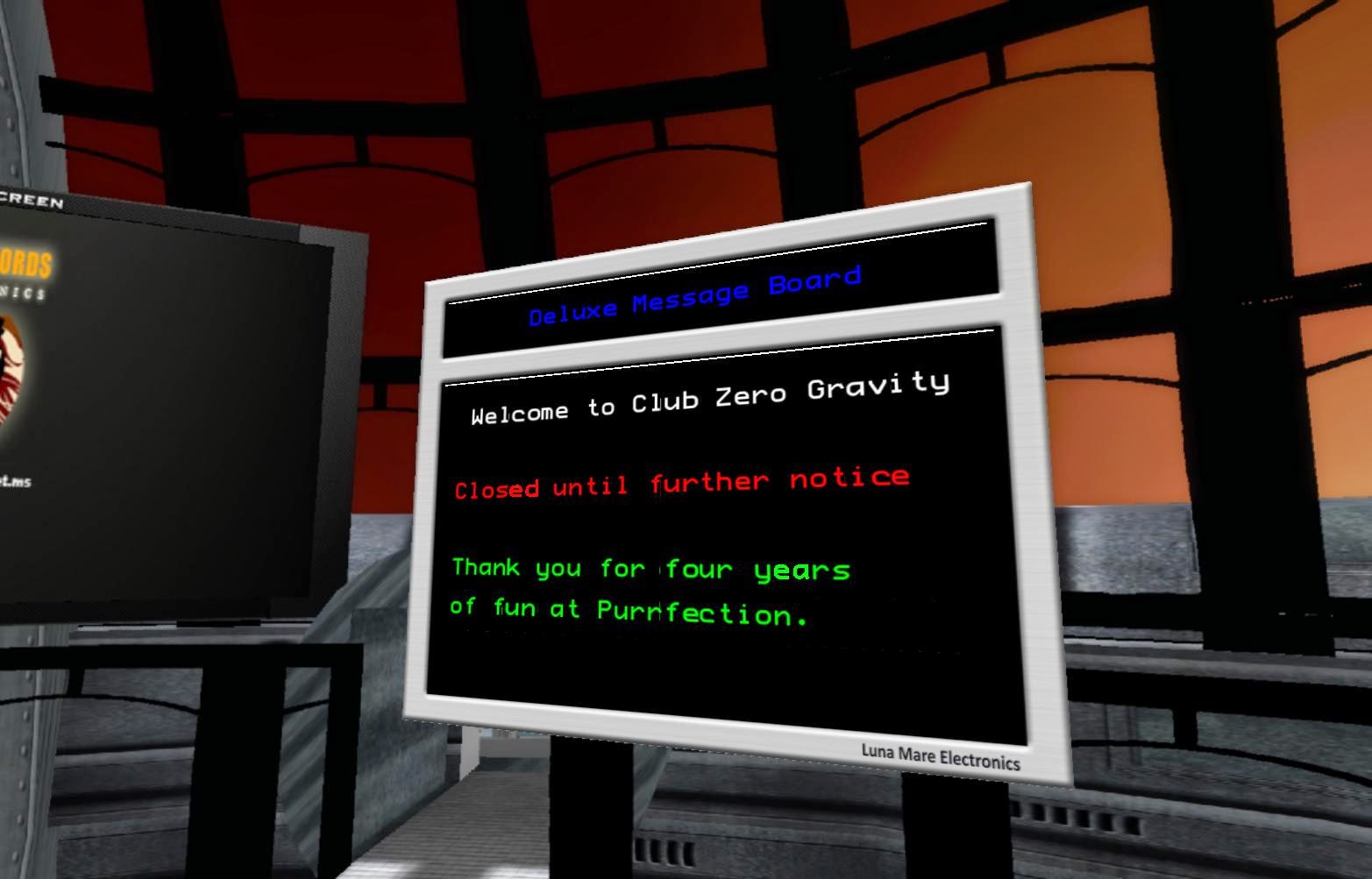 But this may not be the end for the space station club. There's already talk by Sunweaver Estates onwner Rita Mariner of finding a place for Zero-G somewhere. But where to put all those prims so nobody's land gets lagged? Rather than risk dashing raised hopes, not even a guestimate date has been announced. But the general feeling is it will be back, someday.

In the meantime, two clubs are reopening in the Sunweaver Estates to fill the time slots once held by the "Party among the stars." The Vinyl Museum, built in 2009 as "Perri's Xanadu" over what is now HV Community, will he holding events Tuesdays from 6 to 8 PM. Little Dove, the Zeppelin club first built to hold Relay events for the old Passionate Redheads Relay for Life team, will be holding events Thursday nights from 6 to 8 PM. The Happy Vixen, Zero-G's sister beach club, is closing and the group and possibly the name, to be used by the new surfing hangout and beach club at the Sunny Beach sim, Mondays from 6-8.