On the evening of  December 31 2015, ScentualLust announced in the Luskwood Community group (and presumably Trotstale's as well) that the Ponyland sim would be closing.

Fe-fe, fi-fi, fo-fo, fum
I smell a skunk in the auditorium!

Fe fi fum fory, I have wrote my own story.

The end! Of Ponyland...cause nothing can stop the smooze. 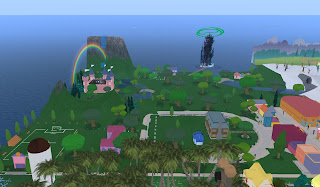 Chatting with ScentualLust, she told me the sim was indeed closing tim for the place, "Farewell time, we made it many months longer than anticipated. I had half a dozen ponies IM me saying how the sim made them cry from childhood nostalgia. Michi Lumin's heading over later. Her and I were the sims only admins, it was just my labor of love for G1. And all the thanks goes to her and OldVamp (he did the builds) for making it happen." I asked where the idea for the sim came from. Scentual answered, "It was a secret I was keeping so none of the other pony sim owners would jump on either a G1 sim, or naming their sim Ponyland (which is where Firefly's Adventure and My Little Pony Tales takes place). I sent Vamp pics of the builds I wanted, and he built a majority of the sim before I bought the sim itself to place the builds in."

Scentual had only planned for the sim to be online for a short time, "I planned on three months. But donations from people like JeanetteDJennet and LeatherTail kept it going, combined with Lindens I had saved up since my rez day. Many nights of Primtionary, etc. $30L here and there can add up. (smile) ... I had a list of intentions, a party in the skating rink, a party in the sky (which you were at), a party in the ice cream shop, and a party in Dream Castle. There was a whole skating "conga" line at the skating rink party. Limited edition MLP roller blades and inline skates were created for it, complete with an AO. This is the kinda stuff that makes it worth it to run a place like this." Amehana Arashi (Amehana Ishtari) commented, "You have no idea how cathartic it was for me to explore it." 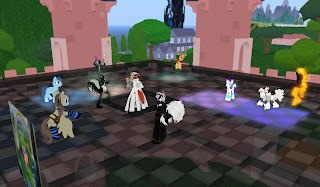 Anticipating I would write about it, Scentual added, "I'd want to say to anyone reading that article, that if they missed out on this sim, they can still watch the G1 material it was based on. Firefly's Adventure: https://www.youtube.com/watch?v=kknbjwYWwaU&list=PLfp_59rbOG-gDt_c0VZO4qlu306Kg3XTF and My Little Pony Tales: http://yp1.yayponies.no/prevgen.php ." Her plans for the future? She told me, "I'm going to work on the Trotsdale Museum of Pony Past, which is an attraction ran by DC the cyberPony in Trotsdale. We'll get Ponyland added in there, DC got quite the handful of pictures for us to hang in there, and I even got a video archive of the sim thanks to Flutter Riff (who has also helped with scenery and a lot of ground work here)." 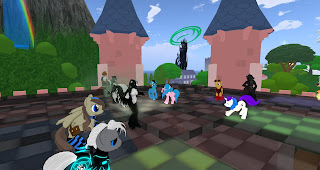 I hung around the place long enough to take a few pictures. As New Years Eve was a busy night for me, I was elsewhere when Scentual messaged me when the sim finally had closed, " Michi Lumin got the last words in the Ponyland farewell party, 'My heart will gooo oooon and oooooooon!' Everyone at the party made a gesture of going down with the sim. It was touching." Scentual then sent me a picture, the last that would ever be taken from the sim, "This was the auto screen grab as the sim went down, a wonderful final snapshot of what was."

When asked if she had anything else to say, "I wouldn't be where I am today if it weren't for Michi Lumin providing a solid role model as a sim owner. Watching her carefully led me to running Derpyland (which is a sim that Dashy and Cera founded) and having it go from not only being an overnight sensation, but turning into a self sustaining pony sim for over 3 years and counting. In a world where your average SecondLife sim only lasts a few months, one would think looking to Luskwood would be common scents since they're the oldest running community in Second Life. I'm a big believer in divine luminous wisdom and experience. And I attribute a lot of those qualities to what lead Ponyland to 9 months of sim life, instead of 3. With no specific community group, and no rentals...it has very much surprised me." Scentual would later remind me Derpyland was the second oldest of the pony sims, Trotsdale being around first.

And so, the sim had it's final curtain call. But it won't be forgotten as there will be an exhibit on the place should all go as planned. And of course there's the memories of those who had fun there.

*Addition* I had accidentally left out a couple paragraphs of the interview when the article first went up. When discovered, the error was corrected.

*Second Addition* The Newser was asked to note Derpyland is the second oldest of the pony sims, with Trotsdale, run by Michi Lumin, being the oldest.
Posted by Bixyl Shuftan at 6:00 AM