The Fairylands are ablaze with shops, art, music and even a Quest, all in support of the American Cancer Society’s Relay for Life.  With 13 Fairylands and a wide variety of activities available, there’s a way for everyone to support and participate in this event. I had a difficult choice to make in deciding where to begin.  Finally I chose to start in Bright Haven (194/127/49). 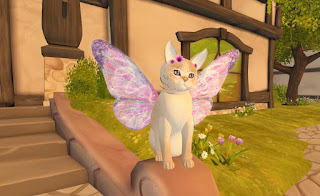 Bright Haven is sponsored by Callie Cline’s KittyCatS!  I’ve been a longtime fan of these little cuties, and I love to shop.  There are 18 stores in Bright Haven-- perfect for me.
I arrived in front of the signature KittyCatS! shop and went inside for a quick look at the kittens.  There’s a huge variety inside ranging from tiny kittens to a large, friendly tiger. There’s accessories and food, too.   I was greeted by Cinnamon Tortie, one of the customer support staff who was working that day.   She was friendly and helpful as we chatted about the Faire.   She told me that Callie Cline created some new items for the Faire, including the fairy cat statue, a multi-color flower scratching post, and a shoulder size kitty for the Quest.  Exclusive items, like the statue, will only be available during the Faire. 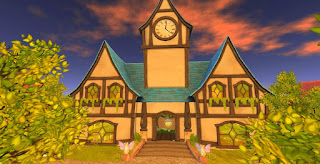 After getting a couple of scratching post flowers, I hurried off to the other shops in the village.  I noticed a lot of visitors that morning, including Ąķį (aki.kira), Zane (julienbrimstone), Nacho (nacholibra), Mystik Blackhawk, and Piccione Verino.  One of them, daviid815, spoke to me as we walked along the cobbled street. “Any cool place you recommend me to go?” he asked, explaining that he was new to this exciting, huge world.  It was great to meet a new, friendly resident.  I gave him a few suggestions and watched as he hurried off to explore Bright Haven.

I made a quick stop in the KittyCats’ Creations, a tavern where I found some fun Gotcha’s and tasty treats.  The Seamstress Shop, found at Bright Haven (142,41,50), was one of my favorites.  Owned by Geryn Sloane, it featured lots of special items for the ladies.  The shop is charming and filled with bolts of cloth, a spinning wheel, looms, and even a sleeping kitty. 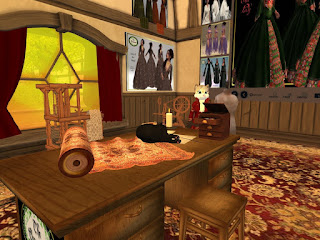 Even more lovely gowns could be found at Les Encantades, located across the street.  Many of them were only 250L, a great bargain for a great cause.   If you need furniture, there are stores selling it, too.  I saw dressers, tables, and even a chiminea for only $175L.   Mystic Sky, owned by Skyler John, has great outfits for both men and women.  Gifties, too!  At "Designs by Isaura” there were fairie dolls and Galactic Princess outfits.  Very stylish.

The proceeds from Fantasy Faire are going to support the fight against cancer.  I spotted a notice that showed L$ 2,406,899 ($ 9,628 U.S. dollars) has already been raised as of April 23. It’s great to see the SL community coming together in such a creative way for such a great cause.  Fantasy Faire runs until May 1.