Final Trip to the 2016 Fantasy Faire


I couldn’t resist one more stop at the Relay for Life’s Fantasy Faire.  Before it ended, I wanted to quickly check out a few more places. I started at Echtra, which was sponsored by the Lost Unicorn Gallery, and located at Echtra (197, 60, 75).  It was a dark, mysterious village.  A convenient kiosk offered a way to experience Echtra by relinquishing control and enjoying the freebies through a tour.  If I would have had more time, this would have been the best way to view the site. Instead, I snooped around on my own.  I scared a small flock of sheep but otherwise I avoided trouble. 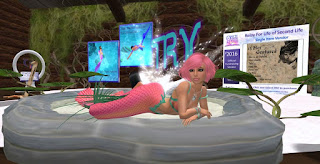 In addition to the village, a Second Life mermaid site was located at Echtra (176,31,76).  My neighbor Celtic Infinity is a Mer and had given me a landmark to the spot at the beginning of the Faire.  When I popped in on Friday, she and Kmac Yardley were there to greet visitors and support the Relay for Life.   Information about tours and about the Safe Waters Foundation lined the walls.  There were mer tails, sea plants, and other items available. Lots of residents stopped by to say hello, pick up a few items, and help the Relay for Life while I was there. 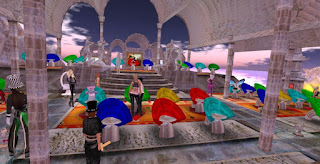 “We've had a lot of very nice people stopping in and checking out what underwater in SL has to offer,” Celtic said.  As we chatted, Booster Terl Spice (terl.luckstone) came in to ask about a unique Second Life avatar.  When they began discussing sea horses, I asked about sea wolves.  To my surprise I was informed there was a whole merfur community.  Another item for my list of things to check out in SL.

I made a brief stop at Sapphire Mirror Lake (66, 203, 50) where I heard the end of a musical performance. This location was the Arts and Entertainment spot for the Faire.  Judging from the reaction of the crowd, I had missed a great show. 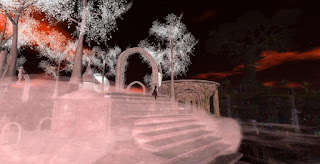 My final stop was at Twilight Illusion, which was sponsored by Merchants of Dreams, and located at Twilight Illusion (81, 124, 88).  This site was a beautifully eerie place filled with mist and fog.  One of the stone buildings, Silent Sanctuary, was lit by candlelight and filled with tapestries.  Along the walls were beautiful items available for sale for your own castle, with the proceeds supporting the RFL.

Bam Pu Legacies were located in another building. These items were created by Bambi Chicque (bambichicque) and included statues, art, builds and more.

I left the Faire knowing there was so much more that I was going to miss.  This year’s Faire had magical fairylands, great entertainment events, extraordinary shopping, and a role-play quest.  Best of all, it raised millions of Lindens to help in the quest to find a cure for cancer.