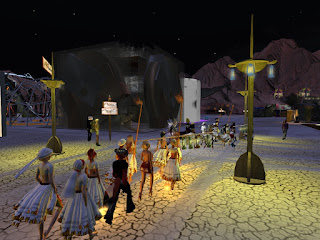 Burn2 in Second Life was an exciting event to participate in. Not only did I DJ a few times at the dj stage which was a large wooden ship I also was in the lamplighter procession traveling from sim to sim. In fact I had to end my dj set at 11am SLT for the procession between the sims to begin.

For those who might not know, Burn2 is the inworld version of the Burning Man festival, an annual event in the Black Rock Desert in Nevada. It’s based on a few principles such as "radical" inclusion, self-reliance community cooperation, civic responsibility, gifting, decommodification, participation, immediacy and leaving no trace and self-expression. It’s based on a temporary community of sharing art through music and sculpture all for bringing pleasure to the participants. Burn rangers and other avatars rented the sims every year for this grand event. 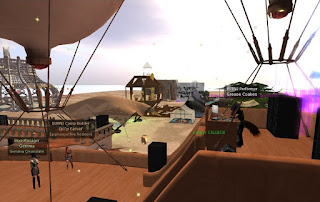 Second Life has brought that same atmosphere to inside your computer as I was a DJ to share my music. To adhere to the principles, I wasn’t allowed a tip jar and I was not allowed to ask for tips. I was sharing my music as part of the Burning Man theme.

Timothy S. McTaggart (tsmt01 Resident) said he himself has been to Burning Man and he had this to say as he was one of the builders, “Dusty and crazy but worth the trip.” In addition, he said, “This is the only real-life Burning Man sanctioned regional that burns 'The Man.' ” In other words Second Life is the only other place Burning man is allowed.

The Burning man is exciting even in a virtual universe and was fireballs of fun. If you get the chance come participate in Second Life or if you’re lucky go to the real one in Nevada.

As my DJ set ended, Burning man requested that the limbo sim be cleared for the lamplighters to prepare their parade like procession rangers guided us from one sim to the other. It was fun as they asked me to help carry the lamps Fifi Candyfloss and Franja Russell were lamplighters and firedancers among others. One of the burners Ratatosk Independent wrote this poem as self expression.

Eye music
------------
Firework is like music for the eye.
Flowers and thunder in the sky.
Magicians send up flowers with ease
Patterns and wonders and buzzing bees!
It's one of humankind's better invention!
Love and laughter its only intention. 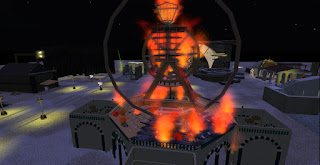 Near the end of the event on Saturday there was an effigy burn as part of Burn2, the "Burning of the Man." There was avatars EVERYWHERE. Everyone and their dog was chanting BURN HIM. Based on "The Man" from this year's Burning Man, the wooden figure was smaller than on most years, but it burned hot and bright just the same.

For those who haven't been to the Burn2 area, or haven't seen the whole thing yet, the art exhibits will still be up for two or three days. You can marvel at the drawings of Leonardo DaVinci's genius come to life, or rezz a mutant vehicle and have some laughs as you drive around in a martini glass or red wagon.