In January 2009, our predecessor paper the Second Life Newspaper did an article about an inauguration ball in honor of President Barack Obama. Eight years later, on January 20 2017 and the weekend after, there were a few events and displays in honor of the new President now, Donald Trump. But not everything was in his honor. 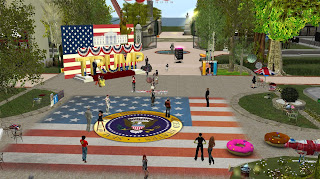 Following a tip from ShadowRene Ivanova, I headed over to the London City sim at (79/226/23). There in a city park area, the British sim had a tribute to the new US President. Painted on the ground was an American flag with the Presidential seal in the middle. Not far away on a stage with another American flag and a picture of the White House behind it was the name "TRUMP" in red, white, blue, and gold. 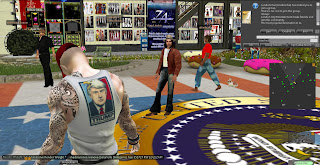 There was some discussion going on, partially in chat, partially in Voice. Despite the controversy that often follows Trump, the conversation was more or less civil. But among the crowd was one of the Lindens, Warp Linden, out of either curiosity or perhaps wanting to make sure the place wasn't griefed. Among the other avatars were a few tinies and furs. 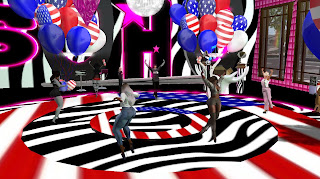 I heard about an Inaugural party held on another spot in the sim. It was being held at a club called, "One Soho Square." The place was all decorated in red, white and blue, on the floor and with balloons. But not everything about the club was first class. There was a bit of irreverent humor involving Queen Elizabeth and a phone booth.

Mike Fahley of Kotaku also wrote about the tribute at London City, including a brief video of the place at the time Trump was giving his speech. He stated as many as 97 residents were in the sim at the time. He saw a "few" people shooting at each other or having "laid down on the ground in dying poses with daggers in their backs." But for the most part the crowd was civil. 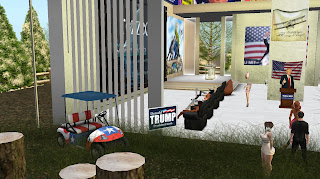 The Trump Pub that had been around on Election Night was gone, but there was another Trump hangout high above the Atomica sim. The crowd was definitely more partisan, "We are conservatives and Republicans or Libertarians and gracious people." Some were talking while others were watching a film. There was a little speculation about who the Democrats would run next time, feeling Hillary Clinton had her chance and Sanders was too old. One was expressing revulsion of a CNN article that openly asked the question what would happen if Trump and Pence were assassinated. Seeing me, she was a little surprised to see there was a media aimed at covering Second Life. 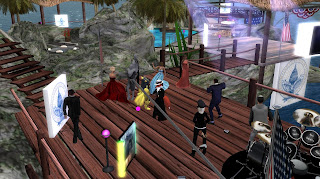 The Second Life Republicans would have a couple parties. One was on Friday night. The second was on Sunday. While I was there, it was a small crowd with light conversation.

Not all Second Life residents were celebrating the new President. Hamlet Au wrote about an inworld photographer (NSFW picture), Shilo Selene Goldlust (Shiloselene), whom had started a Flickr "body language" challenge,"As the war on humanity intensifies via attacks on our gender, our sexuality, our religious beliefs, and our cultural identities, it has become even more important that we retain the confidence to speak up for ourselves, and let the establishment know that we won't be cowed, and that we won't allow ourselves to be victimized." The picture she had contributed she explained on a blog was inspired by her being sexually assaulted in college. Any1 Gynoid informed the Newser of one other protest screenshot by artist Adolf Chapman (NSFW). 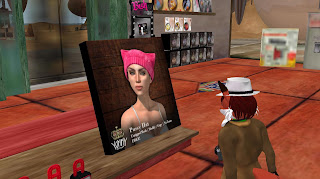 Inauguration Day in real life would see numerous women's rights protests. In Second Life, One can get one of the pink "pussycat" hats at Tableau (169/112/23).

Like on the day after Election Day, there were numerous comments on Facebook, about a third in support of Trump, a third against, and about a third with mixed opinions or not caring. The photo posted on Friday when linked to on Facebook got a few dozen comments from both sides.

For the second time in it's history, Second Life has seen the election and then the swearing in of a new US President.  Much like last time, many have high hopes for him while others fear he will bring ruin. This time the ideological roles are reversed. How he will perform, time will tell.