Occasionally you hear about them when some project by Linden Lab, such as Horizons, is in the news. Maybe once in a while you see one if you drop by Portal Park. More often, these workers of Linden Lab from the Department of Public Works go by unnoticed. But one place in Second Life, Bay City, takes a day to make sure these usually unsung "Lindens without the Linden name or authority" get remembered. Once a year in early February, they have their "Mole Day" celebration. 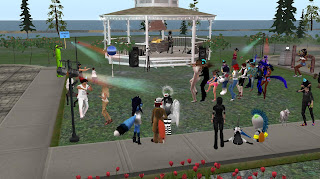 The press release described the moles as " members of The Linden Department of Public Works (LDPW). The LDPW is a program focused on improvements related to the experience of living on, or visiting the Linden Mainland. The LDPW is a team of Resident builders, scriptwriters, and others to create new content on Linden Lab's behalf and to the benefit of all. These Residents all have Second Life accounts with the last name 'Mole.'”

Bay City, which was formed in 2008, was created by Linden Lab and the DPW. So the place had an affinity for the moles to begin with. The first Mole Day was in 2010, and this year was number seven. The event usually takes place on February 2, or Groundhog Day. But this year the event took place on Saturday February 4, as the organizers wanted to take advantage of the weekend. 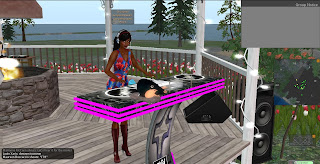 And at 11AMSL time on the day, the party started in the North Channel sim. DJ Gospeed Racer provided the tunes for the first hour, the stage on a pavilion in the back of the party area. There were a few Bay City notables such as Pygar Bu and of course Marianne McCann. And there were a few moles present, such as Enya Mole, Dyna Mole, and Garden Mole. "Let's hear it for the moles!" Marianne shouted. At one point, someone asked the moles, "do you guys have a favorite build, here in Bay City?" Dyna Mole answered, "That's a dangerous question (mile)." "Live dangerously," someone responded. Pygar mused, "We're a dangerous city." Dyna finally answered, "I happen to like the Lollercoaster, but then I am partial." Marianne commented, "I know I could not pick out one, and I didn't build 'em. ... Ya, do love that Lollercoaster." 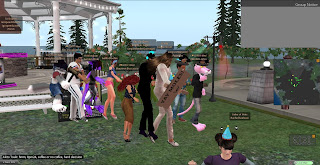 Garden commented, "The first thing I ever built as a mole was here." Dyna added, "I made the shooting galley in Happy Hippo too.  That was one of my first Moley things." Garden went on, "Of my stuff first thing I made was Farpoint park in Molesworth ..or theres the swimming pool more recently or of course the Bay City Aquarium. But there are much better and newer builds than mine, haven't explored the coolness recently." One resident commented, "I am not sure I could pick out a favorite Mole build either. But I know that I am so grateful for your work."

There was a place residents could grab a mole hat or a "Yay Moles" sign. Many of the moles and residents danced to the music, some in a conga line going around. Gospeed played a number of classic tunes, plus the audio of "the mole" scene from "Austin Powers." And one favorite of Mole Day, the song "I Am a Mole." 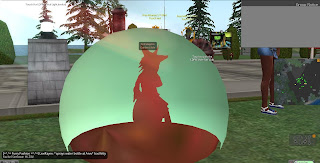 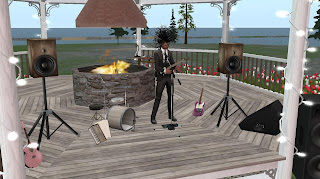 At 12PM SL time, Gospeed stepped off the podium, and live muisician Oble (Obeloinkment Wrigglesworth) took her place, playing his instruments. He would play on for another hour.

It was quite a party at Bay City, and Second Life's moles were happy to have a day of their own.