Afternoon With The Lindens at The Castle Home and Garden 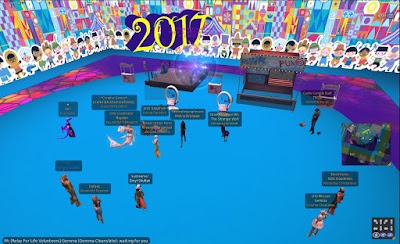 On the afternoon of Wednesday July 26, there was a fun event at the Castle, Home, and Garden contest. There would be a "Meet and Greet" with the Lindens. They wouldn't be answering anyone's questions. They would just be there to have a little fun. 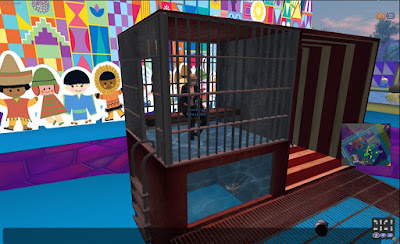 Get all your friends, family and join us for an afternoon with The Lindens!
?·2PM to 4PM SLT
?·Dunk Tank 50L a ball to dunk a Linden!
?·Wrestling Arena
?·Hugg a Linden
?·Much More!
Come and spend the afternoon with the Lindens and contribute to fighting back to find that cure for Cancer! 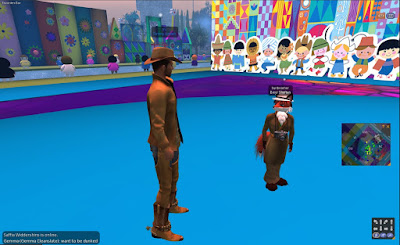 There were a number of Lindens there, such as Tommy Linden in the picture above. "Hmmmm, Tomas is in a cowboy outfit," I observed, "Can we expect a mechanical bull?" 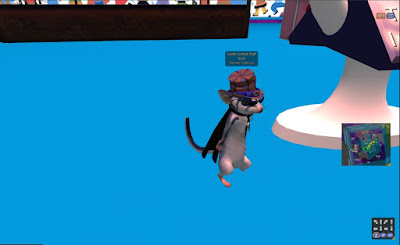 Sid the sugar glider spoke out, "Step closer my friends! Don't be shy. These Lindens have been fed so they wont bite, but they are for you !" Dee commented, "I make no promises of not biting." Someone responded, "Oooh can we bites a Linden?" Keira Linden responded, "You mean I had my teeth sharpened for nothing?" Tommy Linden asked, "Wait, the other Lindens got fed?" Sid then conceeded, "Okay, no promises of no biting, but I have band-aids."

"Invite your Friends, Family, Enemies and all those who would LOVE the opportunity to dunk a Linden! Take on a Linden in the Arena! and or even hug one!" 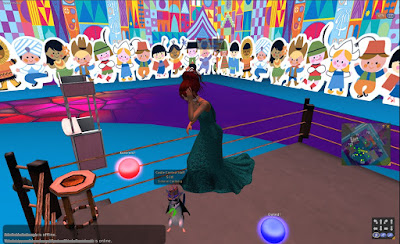 Dee Linden got in the wrestling ring, which was not made for actual wrestling, but had still poseballs for poses. The lady Linden tried to encourage people to get into fight scenes with her, "Come on gang, I'm wimpy, y'all can take me." But when tiny Sid got in the ring, she didn't seem to know what to do. 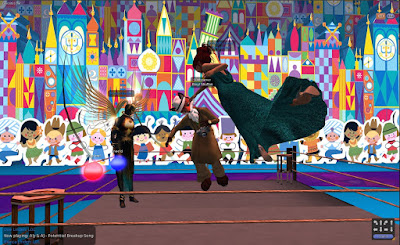 "Get your photo taken beating up a Linden!  Now you can frame that and put it in your SL Home as proof!!" The poses could make you look like you were beating up a Linden, or getting beaten up by one. I imagine after certain articles I wrote, this is how some Lindens felt like responding. 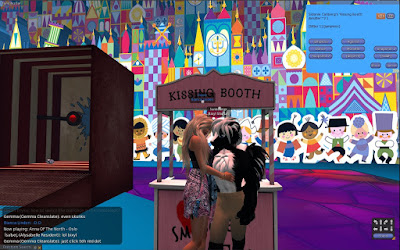 And there were a couple kissing booths, "Bianca is ready for kisses!!!!!!" But when a certain stinker hopped in, she didn't seem to know what to do, even though skunks and kissing booths are nothing new. 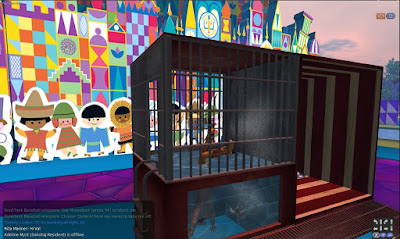 Of the dunking booth, "Let's celebrate our precious Lindens! By drowning them!" when Keira Linden was sitting there, no one could thrown any balls. By the time the sim's permissions had been adjusted, Tommy Linden had taken the seat, and found himself unable to stay on the seat for more than two seconds for a while as he was constantly being knocked into the water. "Does it work now?" Sid asked of the booth. Tommy Linden answered, "Oh it's working all right." "Is Tommy clean enough now?" iSkye Silverweb asked, "maybe needs another dunking or two?" 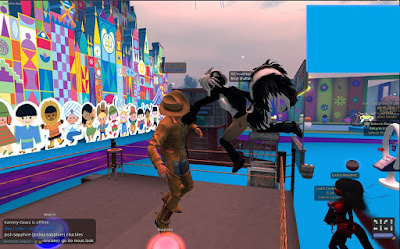 Tommy Linden then decided to dry off in the wrestling ring, but he was still getting piled on. 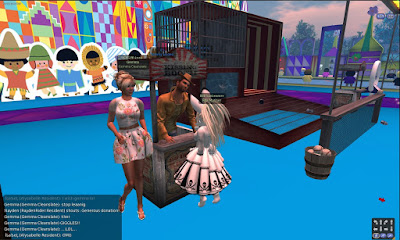 Tommy then decided to give the kissing booth a try, " Alright, if this booth ain't safe, I am blaming Sid." Then Sunweaver chieftess Rita Mariner stepped up, "Who's manning the Kissing Booth, I am here to plunder some booty." 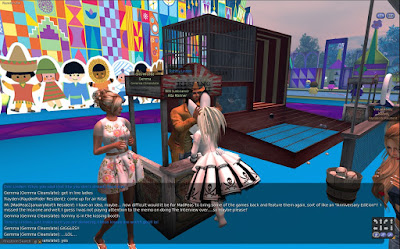 But she settled for a few ear rubs. 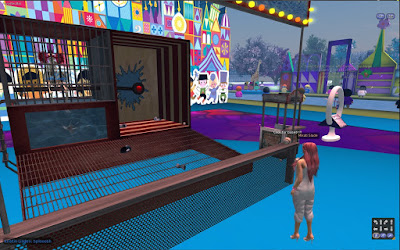 Mikati Slade, the "baker" of  the Second Life Birthday's "Cake Stage" was also there. Here, she prepares to lob a baseball at the dunk tank with Kristen Linden on the seat. 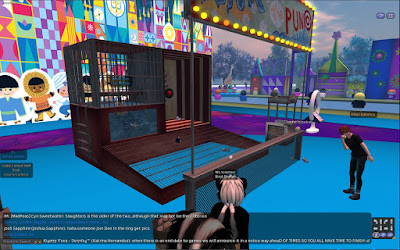 Kikas Babenco, half of the "Kikas and Marmaduke" comedy act, was there too. 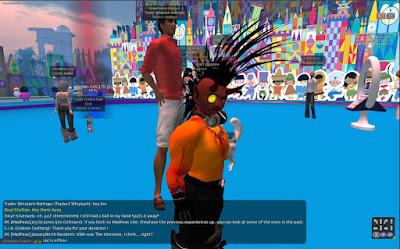 Kona Linden was also there. 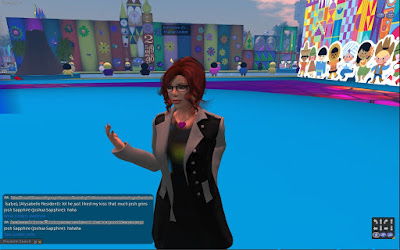 As was Shanian Linden. 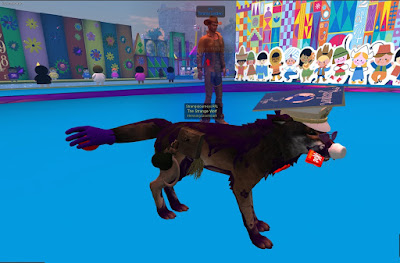 "The Strange Wolf," just being strange around Tommy Linden. 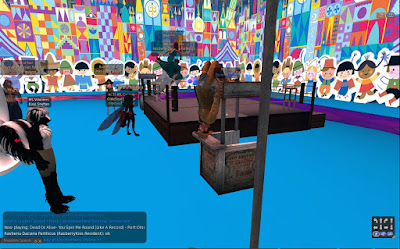 Tommy Linden fiddles with the kissing booth. His efforts would get him cartooned. 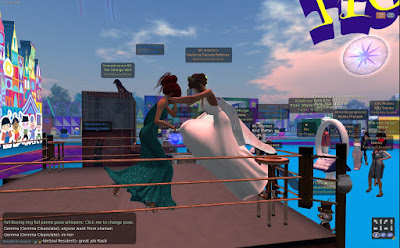 Catfight! Rasberrykiss shows a few moves she picked up from the Roman RP. 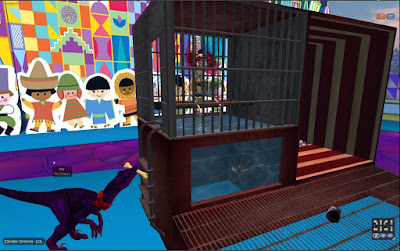 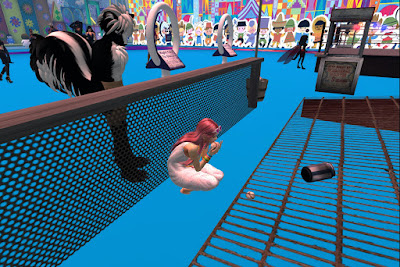 Not sure what Mikati was doing here.

It was a fun time that afternoon when the Relayers and friends got to have a little fun with the Lindens.