Any1's "Feed a Smile" Event, The "Pixel to Pixel" Fundraiser, And The Benefit Concert For Maxx Sabretooth

It was a case of "friends with benefits," or rather two benefits going on last Saturday July 22, along with a third that had taken place a couple days earlier. 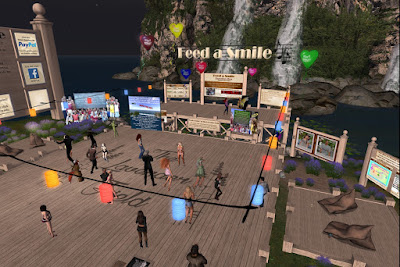 The biggest one was organized by Any1 Gynoid, a friend of the Newser whom was once one of it's reporters, in addition to being a former CNN iReporter. Her tenth rezzday fell on Saturday July 22, and she decided to turn it into an 11 hour-long benefit for the "Feed a Smile" group in the sim of the same name, which raises funds for the Live and Learn in Kenya charity. 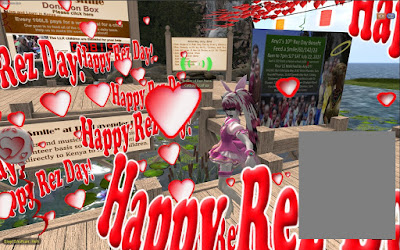 The event started at 8AM. I dropped in just after 10:30 AM and saw some stand-up comedy featuring with Catboy Qunhua, Wy Noyt, (Wyvern Blazewood), Thinkerer Melville. After that a performance of African drum music by DJ Ottowan (aka Pilot of the Airwaves). 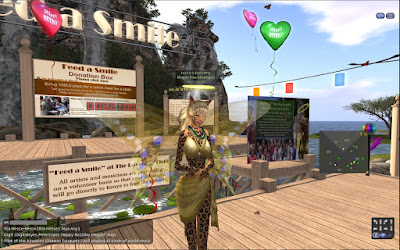 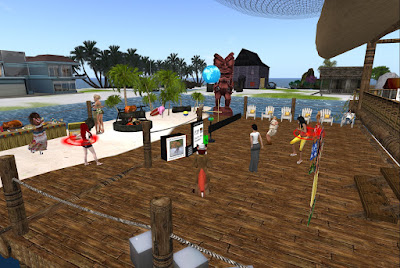 Also going on that day was the "Pixel to Pixel" anniversary party. The group, which has been in Second Life for eight years, helps the disables and others with limited or no incomes some financial assistance inworld in order to "do things that many enjoy in SL without giving it a second thought -- have a home, buy some clothing or furniture, or simply taking snapshots or uploading textures." The event, besides celebrating the occasion, was also to raise donations to provide such support.

Jadyn Firehawk, the founder of the group, was among those there. She had special thanks for the people at the Junkyard Blues club as "their donation kiosk ... single handedly brings in the most donations of anywhere else on the grid!" Later on, "I need to say too that Eme Capalini is here from Virtual Ability, which is the group that I came into SL through, on day 1, and inspired me to do the foundation in the first place"

There were cutouts of a Hawaiian man and woman, of which one could click to get a lei and hula hoop. There was also some AI device named Kyrie, which provided entertainment in the form of often random answers in response to requests, "Hey Kiri, tell us a joke!" "I would avoid the sushi if I was you. It’s a little fishy." "Hey Kiri, tell another joke." "Hmm. Thinking… 'Tell Another Joke at the Ol' Choppin' Block' is the second full-length album from New Jersey indie rock band Danielson Famile." When asked who made her, it answered, "I was created by Stephen Wolfram and his team." When someone invited Kyrie to greet me, it's response was, "Hi there Bixyl. Wow, you're certainly shorter than most dudes in Second Life."

Jadyn told me the event today alone had raised, 55,930 Linden dollars, "for the week, because of the publicity for the event included, it's L$77,571. That translates to 155 person-weeks of support!" As the party neared it's end, people wished her and Pixel to Pixel well, "Congratulations on your 8th anniversary, may there be many many more. SL has been and is a lifeline for me, so glad to be able to help this excellent cause." 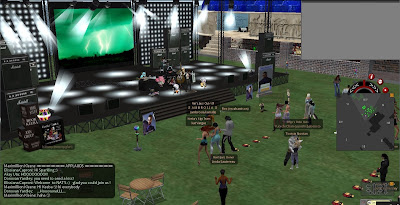 A couple days earlier, there had been another benefit worth mentioning. Maxx Sabretooth, a live musician in Second Life, he has had health problems in recent years, and in need of a heart/and kidney transplants. He would write on his gofundme page, "This week I am heading to Houston, TX for evaluation for this lifesaving surgery which will be an expensive venture. Therefore, I am attempting raise approximately $2500 to help in this process." So Mrs. Elissiana Jahzara Caproni (Elissiana Caproni) announced a concert to raise funds for him.

Heading over to Nat's Jazz Club, Keeba Tammas and her "Tiny Maniacs" had the stage, entertaining the crowd with their music and antics. "Soooo adorable!" one lady called them. Elissiana Caproni was there, calling out, "We're all here to help Maxx Sabretooth  out in his journey to  a better quality of life, so be sure to tip the jars on either side of the stage  to show your love and support! o directly donate to his go  fund me page  click the sign on the far  right side with Maxx's photo..Thanks  so much!" Following Keeba and her band was Max Kleene.

Talking later to Elissiana, she told me, "We raised over 51K but  there may be another benefit for him this weekend. ... Maxx is a good friend and we were glad to pitch in and help the funds be raised tonight. ... We had a great turn out tonight." There was another event, and they met the goal of the current gofundme. But this is most likely not the end of Max's expenses.