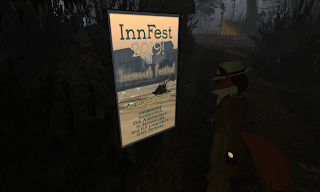 The annual Lovecraft festival is taking place in Second Life. This ia the annual celebration held by fans of H.P. Lovecraft, which started on the author's 129th birthday. Originally called the "Lovefest," this year the name has been changed to "Innfest" after the name of the place, Innsmouth.

Lovecraft received little recognition while he was alive, not really able to make a living as a writer and had little money at the time of his death. But he has come to be recognized as one of the most influential 20th Century horror authors, his works emphasizing the fear of the unknown and the sense that life as we know it is an all-too-thin shell shielding us from a reality too bizarre and frightening to truly comprehend without going mad. He inspired other writers as well as artists and game makers in adding to a sub-genre of horror that has come to be called "Lovecraftian." 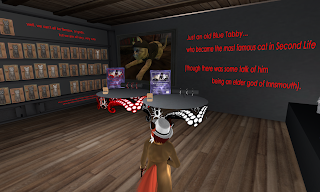 The reason for the event's name change from "Lovefest" has less to do with a few people getting confused by the name and more to do with a certain milestone. This year's festival also marks the tenth anniversary of the sim of Innsmouth, which according to the event website was modeled after Lovecraft's story "The Shadows Over Innsmouth." It was created by Darmin Darkes and her team, and is currently owned by Arik Metzger (AriktheRed), who has been doing the festivals since 2012. 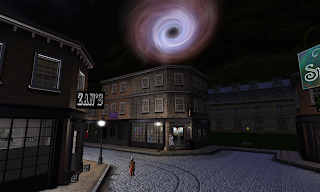 Yours truly didn't hear about the celebration until Sunday August 25, so most of the festival has already taken place. Still there is much to do. The main area around the entrance, Innsmouth (17/34/1201) has a number of shops. Among which is one by Kittycats, whom are described on the website as having brought back the "KittyCat of Ulthar." In one yard is a feline statue and several cats prowl a yard. Across the street from Zan's Clothing is one shop with a strange circular cloud overhead. 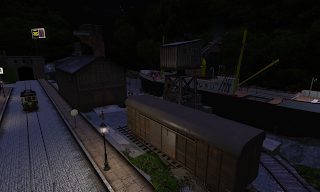 There are other places in town besides the shop, and in the darkness comes the uneasy sense that something is hidden in there just waiting for something to come by and ambush. At the port area is a ship. Approaching it, a message came up, "'At the Mountains of Madness' - An Antarctic expedition that didn't exactly fare as hoped.  Something stirs in the hold... and what, pray tell, is in that crate labelled for the Antarctic (hint hint)?" Taking a look in the dark hold was ... a penguin? But this penguin was a huge giant that occasionally cackled in what sounded like a menacing tone. Irronically enough, there were fossils of a penguin this size found just a few days ago in real life. Maybe Lovecraft was on to something.

There's also a trolley going about town that can take you around the town, as well as other places in the sim. I also found a teleporter that takes you to a place at Innsmouth (30/74/1500) inspired by the story "The Lurking Fear." Touching the sign there will get you a few items. Another I found was at  Innsmouth (65/80/1906). And there is the town of Innsmouth at the ground level at Innsmouth (20/241/54). 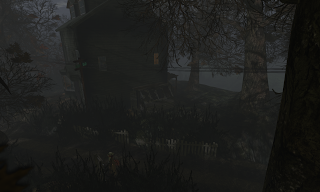 Road to Innsmouth: 'The smell of the sea took on ominous implications...  [reaching] the crest and beheld the outspread valley beyond, where the Manuxet joins the sea just north of the long line of cliffs that culminate in Kingsport Head... On the far, misty horizon I could just make out the dizzy profile of the Head, topped by the queer ancient house of which so many legends are told; but for the moment all my attention was captured by the nearer panorama just below me. I had, I realised, come face to face with rumour-shadowed Innsmouth.' 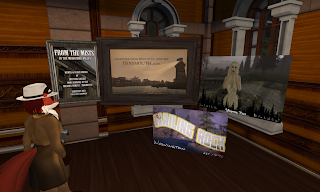 There have been music concerts during the Innfest. On the final day of the event is a Masquerade Ball, at Tuesday August 27 at 9PM SL time (Midnight EST).

So if you're a horror fan, or just want something out of the routine, by all means come to Innfest. If you come across this article after the event, explore the sims anyway. Just make sure you're prepared for the scary and disturbing.

For more information on the festival, check out their website at  https://lovefest.wordpress.com/ .