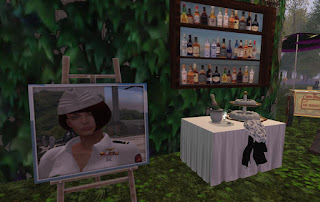 Earlier this month, word had gotten around Caledon and other communities that Autopilotpatty Poppy had passed away. During her time in Second Life, she had accomplished much such as having set up several art galleries and was a sucessful DJ and photographer, as well as the co-captain of Caledon's Relay for Life team. She had been knighted by Caledon's governor and was given the title Dame.

On Saturday July 18, a memorial dance was held in Autopilot's honor. It was held in Roshaven Laudanum. It was stated while the ceremony would be a respectful one, the tone would be an upbeat one and not somber.

This is a celebratory dance hosted by the Duchies of Carntalgh and Trikassl to honor Poppy's love of a festive occasion. It is a time to share fond memories in a joyful setting. Attire: formal, festive uniforms. 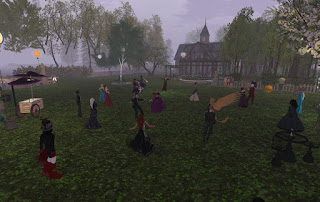 Dropping in at 2PM, a crowd of friends, neighbors, and others that wanted to pay their respects came by. The sunlight was somewhat dim, but not dark. The music was classical, such as Mozart Conchertos. "Welcome to the many of you that arrived while I was on air!" Gabrielle Riel told the crowd, "This is a celebratory dance, so please feel free to start dancing! The dance machines are behind me. Next to the cherry tree. We'll take some time to allow more people to arrive and then Liz will lead us into some memory-sharing."

There were a number of noted personalities from the Steamlands, Relay, and others. Among them were Bain and Panza Finch (Panza Eilde), Vic Mornington, Andrea Jones, Stereo Nacht, Holocluck Henly, Oldesoul Eldemar, Baron Klaus Wulfenbach (KlausWulfenbach Outlander), and others. "It is like the old days," the Baron commented, "I wish it were under lighter circumstances. Guten abend, all." When he made an observation about one duchess, another commented, "Herr Baron, you know there are too many duchesses in this one space to count. Be specific, bitte?" "Excellent point, Duchess Magda," he responded. 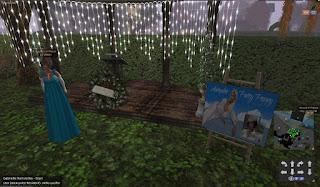 People would say their praises of her. Elfbiter Skysmith (elfbiter Resident) would say, "Patty was the first to welcome me to Caledon when I first came here. And pointed me towards the BlakOpal store what was in the Village at the time."

RockAndRoll AllNight (RockAndRoll Michigan) offered, "Patty was a gentle soul. A friendly presence, and a friend to me as well as most if not all of the people here and many other people who cannot be here. Her loss will leave a permanent hole in SL and our lives, but we will be all the better for having memories of our friend. Godspeed, Patty."

Jaz Beverly would add, "And she has remained one of my major Caledonian role models. Her kind warmth, her joy in life and creativity, her grace under the most intense moments of life's fires. She was organized, enthusiastic, and always at the center of something welcoming and fun. She was a spark that lit more than just her own prodigious creativity. And I will always be grateful to have known her even a little bit in this wonderous place to which she has contributed so much." 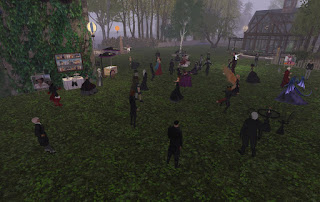 Magda Kamenev (Magdalena Kamenev) spoke, "One of the many things I liked about Patty is how she was ambitious but playful about it. I remember her photo exhibit of the 12 Days of Christmas. And all of those props and settings. And then someone took her photos of the various Lords and made them ammo in a temp gun. And it was the toy of the season in Caledon. ... Patty was wonderful at pouring oil over roiling waters. But every once in a while, she'd set fire to that oil."

Beth Ghostraven would say, "I met Poppy early on in my Second Life, wandering around Caledon exploring. I came upon people dancing around a bonfire on a hill, under a spectacular airship, and I learned to dance there listening to Poppy's music. I loved her themes, and cherished her friendship. I'm really going to miss her. Thank you all."

Wildstar Beaumont added, "In 2011, when we kicked off the Aether Chrononauts RFL Team, Patty was the Captain of Team Caledon. It was an important and experienced team and there was a lot of working together with us noobs. Also Patty organized my first exhibit outside my gallery. At her art place in Oxbridge village. And she did the music for some of the early editions of Christmas at Wild Castle and Privateers Ball. I will miss her."

Star (astarynite Resident) offered, "I remember when I was new I moved to Mayfair and Poppy was having a dance at the Rusty Garter and I rode my horse there.  Caledon was so big to me, I think it took me 1 1/2 hours to get there weaving back and forth through the same sims trying to find my way.  Eventually I moved to Caledon II because where Poppy was so was a lot of the action and events in Caledon."

Phrynne Resident told, "I met her at a concert up over the top of the Village, when it was a concert venue.  She made room for me to see better, and asked me how I was doing, and then invited me to Alley Cats in Morgaine.  And that's how I got to know most everyone early on."

Jan Stroikavskoi added, "I just wanted to add to Patty's many talents, back in 2011 The Black Moon Marauders of Caledon hosted their very first 'Walk the Plank Fashion Show'. Under Captain Tao Mistwalker's direction, Patty Poppy laid the foundations of what was to become a very successful show over the years, while raising funds for Relay For Life. We continued with our annual fashion up until a couple of years ago." 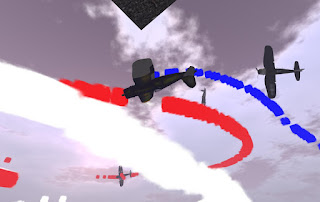 Gabrielle would say with a smile, "Patty did so many special photo shoots. She was so active with her photography. And my favorite piece she ever did was 'Moons Over Caledon,' which was 10 of us women sitting naked with our backs to the camera." Magda remarked, "Oh my ... I still have the male and female versions of 'Moon Over Caledon.'"

Then came a certain musical tune, "Marching With The Band Of The Army Air Corps." Then Oriella Charik announced, "Ladies and gentlemen, please look to the skies for a flying display!" A few planes were flying low in the sky overhead, leaving colored smoke trails.  "The NAS Aerbats Ladies and Gentlemen!" Liz added, "Patty was a huge part of their team. ... Patty would be pleased, at all of you here, airplanes in the sky, drinks handy, dancing all around."

I ended up crashing after the first hour, and logging back on I needed to be elsewhere and my system was having trouble with me having my alt on at the same time. But just half the event was quite a tribute to this woman of many talents.