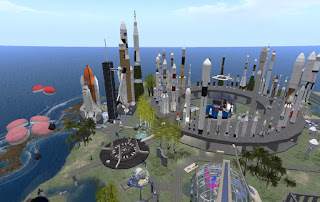 On Sunday September 6, the International Space Museum celebrated it's fifteenth anniversary. To those who don't know, the ISM as it's called for short is both a celebration of man's achievements in space and a place to learn about them as well as space. For more information check the 2019 article. And at 11 AM that Sunday, they threw a party to celebrate.

Aristippus, The Sexy DJ, opens up his vinyl vault to help celebrate the 15th Anniversary of the International Spaceflight Museum at 11 a.m. The dance floor is located in the middle of the museum's iconic Rocket Ring. Fireworks will follow. Dress: Space chic or casual. 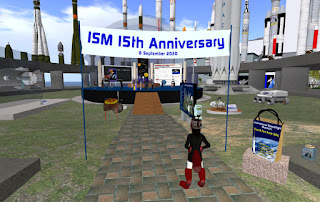 Dropping by with an alt, there was a banner proudly proclaiming the anniversary. As the announcement stated, the party was on a blue dance platform in the middle of the museum, with the DJ in an astronaut's suit playing the tunes such as "Star Trekkin," "Break on Through (To the Other Side)," "Mr. Spaceman," "Space Girls," and "Rocket Man." There was a display of a space travel website and another showing how a probe to the nearby star of Alpha Centauri could be sent about 50 years from now. Another poster had an astronaut pointing at the reader "We Need YOU," clearly based on the old Uncle Sam "I want YOU" recruitment posters. 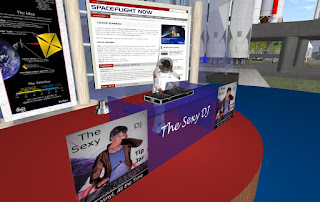 The people there chatted. There were some military stories, "I had a friend who got depressed and joined the Navy. When it came time for assignments, he requested Antarctica. The Navy assigned him to Hawaii. True story." "That is how it always is you ask for where you do not want to go and that is where they send you!" "A guy in my high school had a huge fight with his parents. next day I saw him on his porch packing up his stuff. 'What are you doing?' I asked. 'I joined the army!; he said. 'Why did you do that?' 'Because I'm sick and tired of being told what to do.'" 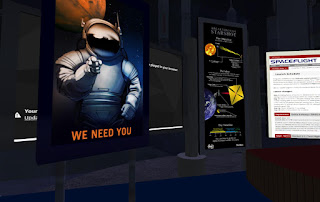 But of course many of the comments were about space, "The first Grubhub delivery in space by a kid in an old Subaruship will be the sign humanity has truly reached the stars." "Are you sure Amazon won't the first deliver service in space?" ".. Ultra hard material. Local sandstone is used for the foundation of the Eiffel Tower, and the local shale is used to make bricks that are the foundations of the Empire State Building, and blast furnaces and power station chimneys etc. Theoretically they could be used to line volcano throats and  diversion channels. Earth has a huge layer of energetic reaction mass. You want an important access point?. Drop the Kevlar cable from Earth Moon L! to the Lunar surface. That's where there's no atmosphere to help, or hinder. Firing rocks off the surface is only Mach 6." "Oooo what a ride, a zip line from the Moon to Earth." "There's that company in New Mexico that's building a Vacuum chamber centrifuge to throw rocks into Earth Orbit. On the moon, don't need the chamber, and a fraction the power. There's an interesting trick for launching from the moon. If you're only throwing basic material, instead of launching a mass in a pod on a tether, make the tether the payload, spin up the system, then cut the cable. Or given the speed of the propulsion. Theoretically its possible to use Bloodhound class tennis ball drive to keep firing the cable upwards, all the way to orbit." The NSS's Ariel Miranda replied, "That works! ... just make sure there is enough metal in a rock slug to use 'bare' in a magnetic rail gun." "Doesn't need to be magnetic. Just need to be conductive enough. And given BAE plasma Railgun, everything is conductive enough."

There was a little talk about the sim, "This is a cool sim." "Thanks, Mojo!  A lot of people have contributed to making it over the years. Not laggy despite the great builds." Of the music, some of the 50's songs got chuckles. When "Rocket Man" played, someone commented, "There's a slightly older song called 'Rocket Man' by Pearls Before Swine, a quite depressing song about a husband and father lost in space. Said to have inspired Elton and his partner Bernie Taupin to make this song." 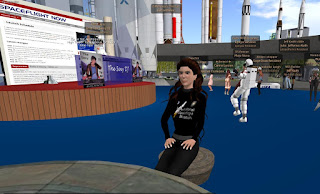 In IM, I would talk to Kat Lemieux, the director of the ISM. "It's been a fun ride!" she told me, "I'd like to thank all the people who've contributed to making the museum what it is today. ... you ought to visit our Mars habitat in Kitely, too!  The world is called 'Universal Habitat.'" They had other places too there, "There's ISMUSEUM, ISM Sandbox as well as the Hab. SMUSEUM has a replica of this rocket ring, although it's not quite as extensive. The Habitat is quite well built out, though."

They weren't neglecting the ISM in Second Life, though, "Here in SL we have a new solar system tour, featuring a SpaceX Crew Dragon. So, right up to date." I then asked with Dragon starting it's manned launches, were they anticipating having launch and landing events at the museum every year like they had with the space shuttle in earlier years? Kat wasn't sure, "If people want to do that we could, if the streaming works. NASA TV quit working, which is why we haven't done them recently." To her, that was a bummer, "Those launch parties were fun." 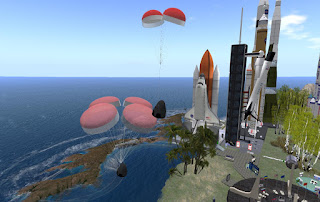 Several years ago, the ISM was in trouble due to financial difficulties. How were things now? Kat answered they were, "We're doing ok now, thanks to some generous long-term contributors. We're contemplating some novel fund-raising things in the near future." She mentioned they were going to be using "Non-Fungible Tokens" or NFTs, "They're based on blockchain/crypto technology. ... It's possible to do collectibles that can have their ownership history recorded on the blockchain. We'll have an announcement once we're ready to launch them."

So what else had been going on with the ISM recently? She answered, "We've had exhibits in several expositions, like the SciFi Con and Expo, and SL birthdays. And World Space Week is coming up in October. We'll be joining National Space Society to celebrate that. We're also working on some more rockets, especially the Rocket Lab Electron. ... Rocket Lab recently announced plans for a Venus trip. We're really excited about the private space companies. Not just SpaceX.

Kat went on, "One of these days we'll have a good inventory of all our exhibits. We put in a lot of work a few years ago into developing a metadata schema for 3D objects, but haven't implemented it yet." I asked why not, and she answered, "The wiki got corrupted, and we got busy with other things. But recently I found a good copy, so we'll probably get back to it sometime. ... Working on the NFTs is pretty intensive, so that's probably our next big push."

That was pretty much everything on the ISM director's mind, "I can't think of anything, except to thank the community for all the support!"

To check out the International Space Museum for yourself, head to
http://maps.secondlife.com/secondlife/Spaceport%20Alpha/48/78/24