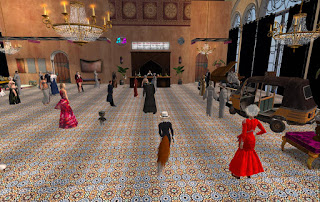 On Saturday December 5, The Confederation of Democratic Simulators held it's Inaugural Ball. The CDS holds one twice a year, a few weeks after it's elections for Chancellor and Representative Assembly. The event is to celebrate the coming in of the new community leaders, Chancellor Kyoko Furse-Barzane (Samara Barzane) and the elected and reelected RA members.

You are invited to spend an 'Evening in Morocco' as we celebrate the Confederation of Democratic Sims' 34th Term and welcome our new Chancellor and Representative Assembly members! Tunes by our own Callipygian Christensen. 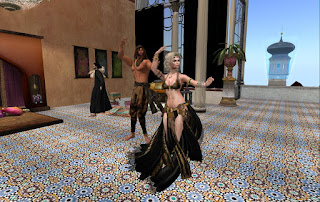 The theme for the party was "Evening in Morocco." So besides formal suits and dresses, people were encouraged to wear Middle Eastern outfits. Some were what one would expect to see in pictures from the country. Others were more in the spirit of some Hollywood movies set in the Sahara.

Callipygian Christensen was giving out to some of the people Tuk-Tuk Rezzers. For those not in the know, they're a kind of three-wheeled vehicle that's a kind of cross between a motor scooter and a small car common in some developing countries, though are occasionally used by postmen and policemen in America. Trying it out later, I found it a little tricky to use, but was driveable. 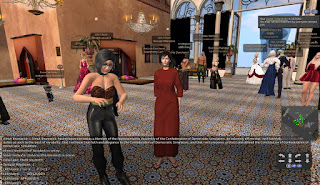 Yours truly got to the party a little late. But I did arrive in time to see a couple members of the RA take their oath of office such as Tanoujin. 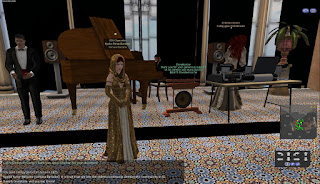 Following that, "Kyoko, our new Chancellor, back to you." As the CDS anthem played, the new community leader spoke, "Okay apparently It's my turn. Thank you Delia. It is true that we are the oldest continuous democratic community in SL. We turned 'sweet sixteen' in September." She paused as there were various cheers from the crowd, "Yay!" *applause*, then continued, "But I'd be remiss if I didn't thank the 33rd Term government, especially Chancellor Rosie Gray for their hard work last term. Currently elected to the Representative Assembly are Rosie Gray, Tanoujin Milestone and Almut Brunswick." 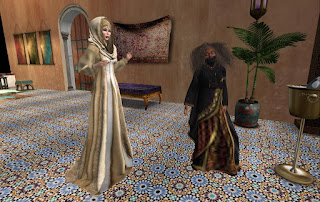 She paused again for another moment, followed by, "Cat walked across by screen, ahems." This was followed by a few chuckles, and she resumed, "Brooke Beandenburg and Lauewre Levenque will be joining me on the Executive team to work on our various projects. We do have a few up our sleeves (smile). I'm hoping that we will, with YOUR help move CDS forward as an amazing community and democracy. I think we have a few ideas (smile), so stay tuned!"

There was more applause followed by, "Thanks again to Delia," then spoke in a quieter tine, "Just IM her her with your desire to run for the RA, don't be shy." She concluded, "And of course the Divine Calii for the music and Brooke for all the comfy cushions here and there. Let the party continue!" She bowed to more applause, "Well said Chancellor." 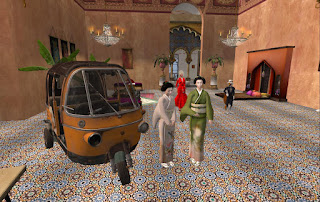 There were a few jokes and musings, "I've been inhaling the Moroccan spices.. sorry mum." And some were very polite such as one geshia, "Ookini san dosu for inviting us Kyoko san and again Omedetou gozaimasu. (smile)" Kyoko was complementary of some of the choices of outfits, "Look at Richie of Arabia! ... Sab and Eve you look perfect!" "Everyone looks wonderful," someone else commented, "I will have to get some ideas from you, for my own use." Kyoko added, "Sab and Eve are members of Aesopica who has performed at CDS a number of times. Good friends indeed!" Of the tiny avatars present, "And the hedgies are so adorable." 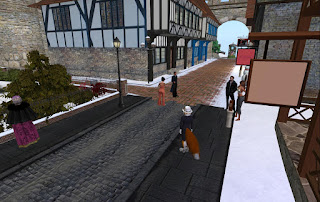 Eventually, it was soon time to head out. There was some talk about the place recently having changed for winter with the snow, Delia saying, "The horse riding trails are now snow covered, and at the top of the Monastery mountain is the ski trail head. if you don't have skis no worries because you can help yourself from the free box." Kyoko commented, "I hear the lakes are about the freeze over so sharpen those skate blades."

After the party, I would walk around, and came across a few people talking. We chatted for a while about goings on in SL. One person had just moved in and was about to open a new shop. I would later hear that under their by-election procedures, Tor Karlsvalt had been made a member of their Representative Assembly.

And so ended the Dec 2020 CDS Inaugural Ball. But as the community changes it's leaders twice a year, it won't be too much longer before there's another one in mid-2021.

Posted by Bixyl Shuftan at 2:00 PM