Shortly after 7 PM SL time on Thursday August 9, I had a chance to drop in at the Breakers Coffeeshop, in the Beakers sim, for a small debate on the subject of political correctness: had it gone too far? The discussion was small, several men and women showing up, but could get occasionally lively. 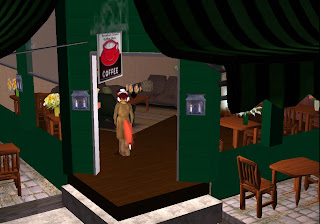 I ported into a debate on the issue of some fire departments having quotas to have on the force at least so many women. The big problem, as most women had less upper body strength than most men, the men felt this could be a problem in a rescue situation if an injured person had to be moved in a hurry. The women were reluctant to criticize this, and there were comments in agreement. On jobs that were less physically demanding, comments were somewhat more mixed, one woman admitting, “I earn more than many men.”

Other things brought up included sports teams having to change names away from Indian-sounding ones, and the height requirement by one city’s police force being in question as some ethnic groups might be harder hit by it. Someone also brought up the book “Politically Correct Fairy Tales,” a book of parodies of fairy tales retold with repeated use of redundant language.

One issue that got a bit of conversation was Dr. Laura Schlessinger using the “N-word” repeatedly on her radio program. She later apologized, and announced she would be leaving her show at the close of her contract at the end of the year. People asked, “Is there a difference between discussing the word and using the word?” And why could a black comedian repeatedly use it with impunity when Dr. Laura apparently couldn’t?

About thirty-five minutes into the meeting, the talk was interrupted by a sim restart, a couple people using not so correct language to describe it. And so, I had to take my leave.