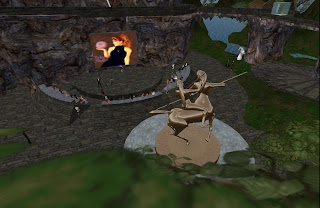 In the southeast corner of the Temprus sim on Sunday September 26, a number of ladies and gentlemen put themselves up for auction. In the name of charity, they put themselves up for others to bid. The winners would get to go out with them on a date. The money raised will be going for diabetes research to the American Diabetes Association and Diabetes UK.

The auction was held at the Bid4aCure Event Park. The action began at 1 PM SL time. Jocelyn Sands and Adrian Harbinger were the hosts of the event, standing on stage in front of the audience in the stands, both in the texture of carved stone. The audience at times packed the sim at 49. The volunteers got on stage one at a time, with their picture on display on the wall behind them and a song they had sent over ahead of time as representing them playing in the background. Overhead was a huge representation of a hypodermic needle, with the sign “STOP the shots!” at the top. This was were donations were deposited. 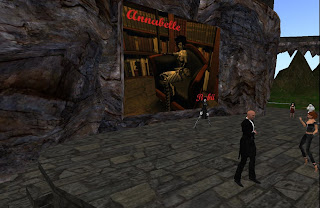 For several hours, the volunteers were auctioned off one at a time. Volunteers not present got IMs when their name was just a few more down a list. The lowest bid that I witnessed was several thousand Lindens. Often, bids were over ten thousand. There was a noticeable amount of joking and kidding among the bidders, notably by the ladies. This included not so serious bids of “6969 L.” Sometimes volunteers were bid on by other volunteers. Hostess Jocelyn told the audience that they would be accepting additional volunteers from them.

Among those volunteering was Nazz Lane, a writer and SL blogger whom had worked in the past for Second Life Newspaper. Dancing a little for the audience on stage, with his shit unbuttoned, one of the girls picked him up for 15,000 Lindens. The highest bid that I witnessed was on a gothic-looking lady, Annabelle Babii, of whom the winner paid 38,000 L for the date with the girl whom was “not afraid to play dirty pool.” 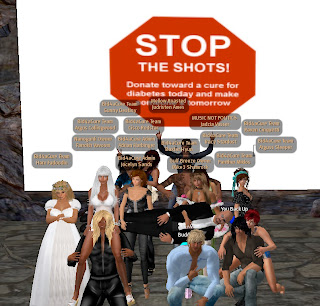 I arrived back at the scene just in time to see the team pose for their group photos. The team was very enthusiastic about what the event had raised, “YEEEAAAAHH!!!” “It rocked hard!” “It was awesome!” “Absolutely amazing event.” “Once again, Adrian and Joce rocked it out with the bid auction.” “Great fun, great cause, great people.” I was told that in other events, more cash had been raised. Combined with the money from the auction, they had raised a total of 870,495L.

And who sold for the most? That was Jocelyn Sands herself, whom was finally won for 80,000 Linden dollars.

The Bid4aCure group isn’t done yet. They still have more events, and have the goal of raising a full one million Lindens.

“For more information visit http://www.bid4acure.org . All donations accepted, no donation too small.”