Egypt Sim: Protests Turn to Celebration at News of Egyptian Leader’s Stepping Down

As the protests went on in Egypt, so did the demonstrations at the Egypt sim in Second Life. On Thursday February 10th, it was announced Egypt’s strongman Mubarak would be giving a speech. People speculated that he was finally giving in and resigning. But instead, Mubarak announced he was transferring some powers to his Vice-President, saying he would stay until the planned elections in September.

At the Egypt sim, the mostly anti-Mubarak crowd expressed their disappointment, “(This is) the same s**t as the last time he was on TV.” “He is staying until September.” “It looks like the news agencies jumped the gun in reporting that he was stepping down.” “I think riots now.” “I am afraid of that.” “Oh God save us all!” “He gives a good impression of a mad rambling megalomaniac.” “(Many) are demonstrating at Tahrir Square now and (many) all over streets, they wont let him stay.” “He is trying to brainwash them, but they are not stupid.” “MUBARAK GO NOW!”

Various people displayed links to the Al Jazeera website where live footage was broadcasts. Others watched CNN. Voice was active in the sim, and people began using their microphones to sound out the news station’s broadcasts of the sounds of the angry crowd, “All People in Tahrir Square saying Mubarak Go, Down Down Mubarak.” “He can kiss my a**!” “He is deaf and blind, ignoring people.” “Just resign Mubarak!!! get out!!!!!” “What a stubborn old man.” “Leave, leave, leave, Mubarak.” “Get out Mubarak!!!” Someone called out, “Listen to the square.” And people began chanting in type what they heard, “Leave, leave, leave, Mubarak.” “LEAVE LEAVE MUBARAK!” “Leave leave leave leave Mubarak!”

Not everyone at the sim was so quick to demand Mubarak leave. Some commented there would have to be procedures for a peaceful transition. But they were outnumbered as the chants continued, “Leave leave leave leave Mubarak!” 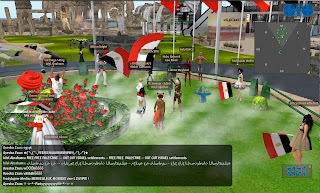 The following day, there were reports of Mubarak leaving the capital, taking a vacation at a resort town. Then came reports that the military had finally stepped in and ordered him out. In effect, there was a military coup. But it was a coup the protesters welcomed. When the news hit Tahrir Square, the people erupted in cheers. After thirty years, longer than many of the demonstrators had been alive, Mubarak’s reign was finally over. 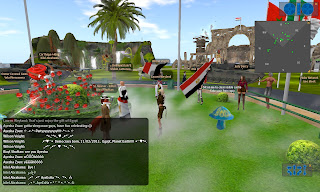 Logging into Second Life, the atmosphere reflected real life. Gone were the protest signs. Instead, people were waving flags around, cheering, as firecrackers went off on the ground, “Egypt! Egypt! Egypt!” people chanted in chat again and again. The sim had been changed a little to resemble Tahir Square, complete with the tanks. A few women were dressed in Arabic women’s wear in the colors of the Egyptian flag. Someone was chanting anti-Isreali slogans, “Free Palestine!” in addition to rezzing a couple anti-Israeli cartoons, but most ignored them. The event was all about Egypt. At one point, comedian Lauren Weyland dropped in. She thought this was an exciting day, and wished the Egyptians well.

Besides the Egypt sim, I heard of a display in the Terra Egyptian sim. Porting over, there were Al Jazeera broadcasts plus a number of anti-Mubarak cartoons. One panel had his picture “X”ed out, “Bye-Bye Mubarak!”

In real life, newsmen have been endlessly discussing the situation. As of now, there isn’t much of a political process as the Mubarak regime stamped out any dissent. The Islamic Brotherhood has gotten some talk, people worried about the possibility of “another Iran.” Israel in particular is watching nervously, worried that an anti-Israeli regime would mean a return to the days when they lived under the everyday threat of war and bombardment. Others look at the situation more optimistically, calling the outbreak of demonstrations all over the Middle East their “1989,” comparing it to the fall of the Iron Curtain.

For now, the Egyptians are taking the moment to celebrate this unique moment in history, in Second Life as well as real-life.

(Note: when preparing this article, I found most of my pictures were nowhere to be found, so I used what I had)
Posted by Bixyl Shuftan at 5:30 AM