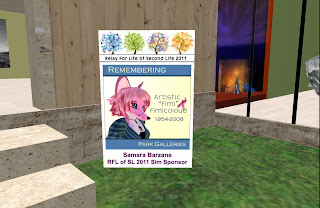 Three years have passed since Artistic Fimicloud (Stephanie Koslow in real life, Fimi to her friends), Second Life resident, Artist, and member of both the Sunweaver Estate and the Relay for Life passed away from cancer. Every year, members of both groups, some of whom are members of both, get together and hold an event in her honor. In 2009 was a candlelight vigil. In 2010, a memorial dance.

On Thursday May 26th, an announcement was made through both groups:


Today, May 26 is the third anniversary of Artistic Fimicoloud's leaving us for her third life. Artist, pink fox, a friend to many . She inspired us to reach higher and try harder. Please come help us celebrate and remember her as we fight back this relay season! We will begin at her beloved Park Galleries with a quiet time, then music she'd love to dance to from 5-7pm SLT, brought to us by Dusk Griswold & Shockwave Yareach. Please join us!


And so before 5 PM SL time, people gathered at the Park sim, both her friends and people whom had joined the groups after her passing on but were inspired by the devotion of others. For some moments, there was quiet reflection, not much being spoken. Samara Barzane was one whom did, “Many of you knew Fimi/Arti, but for those of you who didn't... she was an amazingly brave and wonderful pink fox and artist. We miss her dreadfully. She owned Park Galleries, and I took it over in memory of her.” 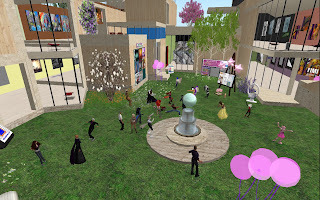 And soon, it was time for the music to begin. Dusk Griswold played for the first hour. Around 6 PM, Shockwave Yareach took over, and played his music. As time went on, people whom couldn’t make it at the begining dropped in. This included Sabine McGettin and Daaneth Kivioq. A few hadn’t yet heard of Daaneth falling ill earlier, and finding out wished him well. Daaneth answered that he was slowly improving on his typing. Others who were there included the Sunweaver leader Rita Mariner, club owners Jenni Greenfield and Nydia Tungsten, blogger Treminari Huet, builder Lomgren Smalls, Internet cartoonist DC Rabbit, and others.

Two songs Shockwave played at the end stood out. One was an old favorite of the Passionate Redheads team, “I Run for Life.” 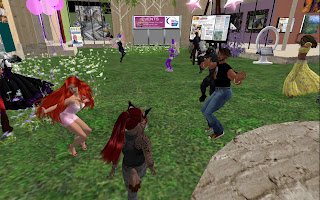 I run for hope,

I run to feel,

I run for the truth for all that is real.

I run for your mother, your sister, your wife.

I run for you and me my friend,

I run for life.


Shockwave’s final song, it took on something of a new meaning in Second Life with it’s people interacting online through computers, “Electric Dreams.” Daaneth called it a “very appropriate song.”


I only knew you for a while

I never saw your smile

'Til it was time to go

Sometimes its hard to recognise

Love comes as a surprise

And its too late

Its just too late to stay

Too late to stay


Well always be together

However far it seems

Well always be together

Together in Electric Dreams


At the close of the music, Shockwave thanked everyone for coming. Rita made a few comments, “Fimi was the first Sunnie to actually pass away on us ... Eugene was another. I still miss him a lot, he was a close friend, called him everyday.” “Remember Fimi And Eugene in your prayers tonight,” Shockwave told everyone.

And with that, the people went their separate ways. A few stuck around to look at Fimi’s artwork.