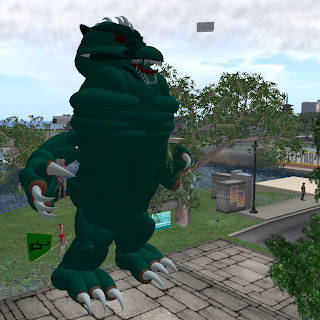 Saturday May 14th marked the official celebration for the third anniversary of the Bay City area in Second Life. The event was marked by a parade across several of the sims down the street, as well as a “Music Extravaganza” on the grounds of the North Channel sim.

Of the parade, Bay City resident Marianne McCain is quoted as saying there were over sixty marchers in the parade. Lalo Telling got a few pictures of it, including giant racing snails, and a Godzilla float. The music event began at 12:30 PM SL time. . First to play was blogger and DJ Mark Dudek. After he signed off at 1:30, JoeUSA Shelbyville began singing for the crowd. At 2:30 Christov Kohnke cam on stage, and at 3:30 Yaro Pinion. Daniel Voyager got a number of pictures, which can be seen on his Flicker. 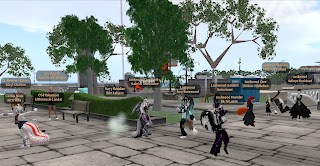 There were a number of Second Life notables at the Extravaganza. Most notable were some of the founders and staff from Luskwood, including Michi Lumnin. As it turned out, Luskwood is just several sims west of Bay City. Still, for the crew seldom seen outside the Big Tree, there were a few jokes about the “hardships” of the “long journey” over. Descriptions of how many showed up ranged from about 70 to in the 40’s. There was one griefer whom tried to spoil the fun with insulting remarks to blacks and furries, but the response was mockery and chuckles followed by the banhammer. 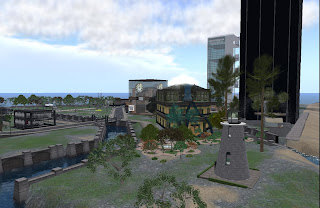 The celebration could only be considered a success.

The Second Life Wiki describes Bay City as created by Linden Lab’s Department of Public Works (a program focused on improvements related to the experience of living on, or visiting the Linden Mainland) in 2008. The area was built in mind to reflect the golden age of the North American urban experience, “between 1940 and 1965, perhaps best typified by Chicago circa 1950 and marked by a distinct deco influence." Made up of twenty sims in 2010, it doubled in size when its Teen Grid counterpart was placed next to it.

Sources: Daniel Voyager’s Blog, Telling Like it Is (parade pic by Telling)