“A Future of Hope” at Club Zero Gravity 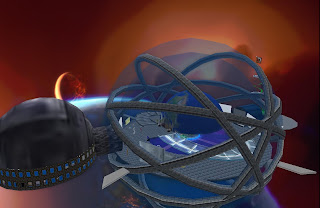 On Sunday May 15th at 12 Noon SL time, members of the Relay for Life team “Passionate Redheads” gathered at Club Zero Gravity. This was the “A Future of Hope” event, a four hour music event that took place alongside the “Halfway There Fair,” marking the halfway point between the launch of the Relay for Life 2011 season and the walk this July. The goal, raise a total of ten thousand Linden dollars for cancer research.

Club Zero’s owner Nydia Tungsten has been a spirited member of the Passionate Redheads, volunteering her time again and again to help out at fundraisers. This time, her space-age club was the scene of the event. Club Cutlass called off it’s Sunday Euro party to avoid conflicting with it. 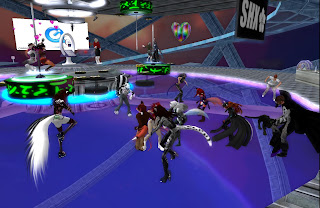 For the first hour of the event, Nydia was in charge of the DJ stand. At 1 PM, she turned over the music stream to Alexandra “Sexy Lexi” Tymets. For the third hour, Shockwave Yareach played out the tunes. And DJ Dusk Griswold cranked it up for the last hour. The event was well-attended, two to three dozen people dancing away, and donating. There were also a few dancers to entertain the crowd. Most never turned on their tip jars, asking people donate to the kiosks what would otherwise be tipped to them. Besides the usual kiosk near the contest board, one had been set up at the DJ stand just for this event. This was where most of the cash went to.

Fun was had throughout the event, with the usual amount of jokes and punnery, “Oh my God, Shock, NOOOOO!! You have a red shirt on! You’re tooo young to die!” “Daan why do you have goggles?” “’cause they are x-ray goggles. He's looking at us all nude.”

Besides the Redheads, a few others from the Relay dropped by. The collection of furs, nekos, and human avs had a ball. At one point, Redhead co-captains Daaneth Kivioq and Sabine McGettigan appeared, and the people reacted with greetings and cheers. Daan returned the greetings in voice, and then to everyone’s surprise typed out a message. He had recovered enough from his stroke to use the keyboard to communicate, “I’ve gotten better at typing.”

Halfway into Shockwave’s hour, the total of the kiosk near him began getting close to five digits. Finally it hit 9,999. RuaWhitepaw Resident then put in the last Linden. Sabine told everyone, “Thank you everyone for your wonderful donations to Relay for Life! Every penny goes to the American Cancer Society.”

With the special kiosk at 10K, donations went too the one near the door. Because no one remembered what it’s total before the event was, estimates vary on how much was raised. Nydia would later declare the event to have raised 14,000 Lindens. 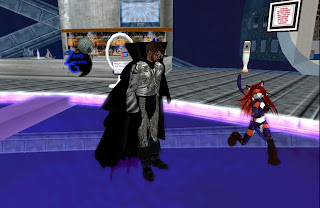 Near the end, Sabine congratulated Nydia, “Look what you've done here! Thank you for this beautiful event, Nydia! Seems to have brought everyone together. (smile) The Passionate Redheads have earned our reputation for taking care of each other, being inclusive, non-judgemental, and open to anyone wanting a home in the Relay for Life! Just so you know, the Relay Committee sends us new Relay Members who are emotionally fragile, knowing they'll be safe with us; and I feel honored by that.” The team wished her and Daan well, “Good night Daan!” “And good luck with your typing! It's getting better!”

It was a wonderful day for the Passionate Redheads, and the Relay.