Here Be Dragons: A Look at the Isle of Wyrm’s Steam Dragon Festival


From Thursday August 25th to Sunay August 28th, the Isle of Wyrms, the nost noted dragon community in Second Life, held it’s “Steam Dragon" festival to raise funds for an animal hospital. But it also offered a chance for visitors to come and look at the place. 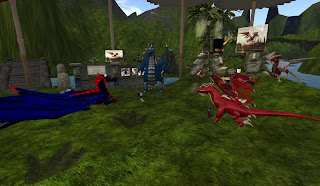 I had the impression the place would be especially laggy with multiple full sized dragon avatars around. What I saw was that many of the dragons were tiny-sized. I also noticed a small number of other tinies about. A few of the dragons were anthros, with two arms and two legs and a tail. I also saw a fae, a foot-high humanoid avie the same height as my micro-fox. There were several of the full-sized dragon avatars that I expected, but they were less than half of the scalies I ran into.

There were a number of exhibits high above the ground on huge turning gears. I did get a look at a few of them, notably the Madpea one, which offered a freebie pet (nonbreedable) dragon. I also came across one story reading, one of the dragons speaking in Voice reading her story to an audience that was a mix of full-sized, medium, and tiny dragons.

I never did get a chance to play the games in their gaming area, but I did get a look at their “Maze of Doom.” With a pyramid as the entrance, it gave statistics as to how many tried and failed, and how many “cheated” by teleporting out. It also gave statistics as to how those who croaked met their demise. I managed to find one treasure chest. My reward: a cookie. If it’s still around, one word of advice for those trying it, look about for boulders rolling behind you. ... 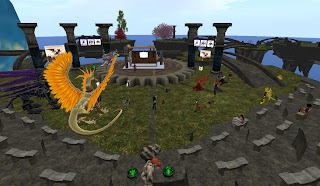 There were a number of musicians invited to perform. I managed to catch the last one, Jana Kyomoon play a performance of ambient music. The gentle tunes pleased the audience, who applauded her performance. Following her, one of the dragons, Onix Harbinger, gave the closing ceremonies, “Thank you everyone for attending our grand summer/fall festival this year. (smile) It has been wonderful fun and a great success!”

Onix thanked a few people in particular for helping out in the festival, but singled out one in particular, “... a very very special thank you goes to one person in particular. She has been the cornerstone of this festival, and I don’t think any of it would have happened without her. I cant thank her enough for all that she has done for us. She was only recently made an Elder and it is with great pleasure to give kudos and my hugs and applause to GertieGazoo Gazov!” The locals in the audience erupted in applause. The tiny dragon thanked them, , “You guys, thank you so much. ... I just loves ya all so much I cannot help myself. (grin)” Onyx answered, “We all love you, Gertie. Yes we dooooo.” “We wubbs you Getrs!!!! And a great kitchen you have. (laugh).” 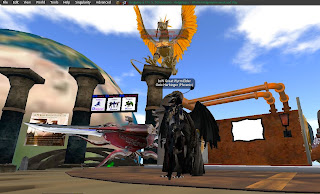 Onix declared the festival a success, having raised a good deal of funding for the Tiggywwinkles Animal Hospital, “The festival is now at a close. There will still be ongoing fishing and other bits of fun throughout the day. Cleanup isn't until tomorrow and the next day. And now... lets have some fun... I hearby lift the rules on particles and gesture spam (as long as it is PG) so that we may enjoy some fireworks!”

And with that, fireworks began launching into the air, making for a colorful sight, especially for those who set the sky to midnight. One of the dragons was so happy, she turned Voice on and began singing. It was an interesting event in this Fantasy sim. Hopefully next time I can see more of it.