The “Jamm for Genes” is an annual event in Second Life. Every year in early August, musicians get together on the weekend to raise money for the Children’s Medical Research Institute. Although the charity is in Australia, the benefits are global, " ‘Jamm for Genes’ is all about live music raising money, for research into cell biology that helps with both prevention and cure of childhood, congenital and genetic diseases.” 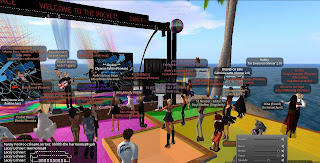 Lacey Lohner called the event “an initiative of ‘Jeans for Genes Day’ here in Australia. Wear jeans to work for a donation - many workplaces run it!” With OhMy Kidd leading the organizing, the event took place at four venues: Lacey’s Place, The Pocket, Endavour Cove, and B&B’s.


Welcome to our Jamm for Genes event! We are raising funds for the Real Life charity "Jeans for Genes" in Australia. All proceeds go directly to the Children's Medical Research Institute: http://www.cmri.org.au/ . Jamm for Genes in Second Life has been running since 2007, and has raised over $4,000 for the Children’s Medical Research Institute. That's right - over 4K! Thanks to all of you - the Second Life community. Let's make 2011 our best.


Dropping in on “The Pocket” at Freestar Bay on Friday night August 5th, musicians and audience alike were ready to “give it up for down under.” Musicians such as Freestar Tammas and Kentucy country music singer Ande Foggarty were on stage at the Australian club once owned by the late Delinda Dyrssen, now run by Cellandra Zon. By this time, over 50,000 Lindens had been raised, and the audience was chipping in more. Ande entertained the crowd with songs like “Horse with no Name,” in honor of the musician who wrote it passing away recently, and “Little Red Riding Hood,” which brought a number of howls and other wolf gestures from the audience. At 11AM, the “Army of Ignorance” played, but instead of their avatars coming on stage, the tricksters instead put up cardboard cutouts of themselves.

“We worked very hard on this jam,” Cellandra told me, “Ohmy Kidd did most of the prework. ... I miss Delinda. She was instrumental last year. ... We work very hard to get the musicians lined up for people's enjoyment so they get something back for donating. And so many musicians are so generous with their time. I LOVE the musicians in Second Life, most of them are so open and generous.” 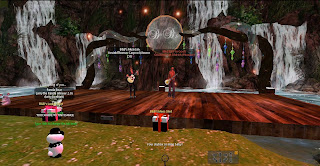 By 11:30 Friday night, 64,000 had been raised. By Saturday 7PM when Ichie Kamachi was singing at Endeavour Cove, the 150,000 mark had been reached. On Sunday August 7th at 1 AM, the event moved to B&B’s in the Utopia and EnGedi sim. On the final day of the Jamm, musicians such as the SOAR band (who played earlier this week at another benefit). Starrfish Ohmai, and Rock Doghouse played. Dropping in at 5PM, KevinMThomas Carpool had joined Onehempcat Oldrich on stage, and the frisky girls in the audience demanded the two guys take their shirts off if they donated a certain amount more money. The 300,000 barrier had been passed, breaking last year’s total, and soon it was at $322,000, “Kevin for 325K do the pants come off?” 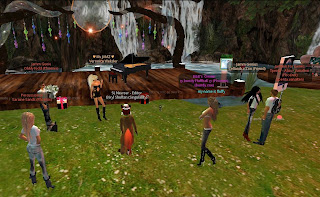 By 7 PM, the 350,000 mark had been reached. At 9PM, the last singer, Veronica Wekster, got on stage, "maybe I need to do my Britney Spears impression - haha!" As she sang, the amount continued to climb. Near the end, Veronica herself chipped in 5,000 Lindens. B&B owner Bundy “Fluffball” Xue blurted, “Oh my God! I don’t know if I want to slap V or hug her!” At 9:58, the total was 367,000. Last minute donations poured in, some after Veronica left the stage. At 10:05, the total was $380,457 Lindens raised. With the event over, the musicians there took a few moments to congratulate each other, OhMy Kidd calling it, “an absolutely amazing weekend Jamming for Genes.”

For those wishing to donate to “Jeans for Genes,” you can visit their website at: http://www.jeansforgenes.org.au/ .

“Thank you ALL for donating your time, talent, Lindens, and ears to this wonderful cause!”